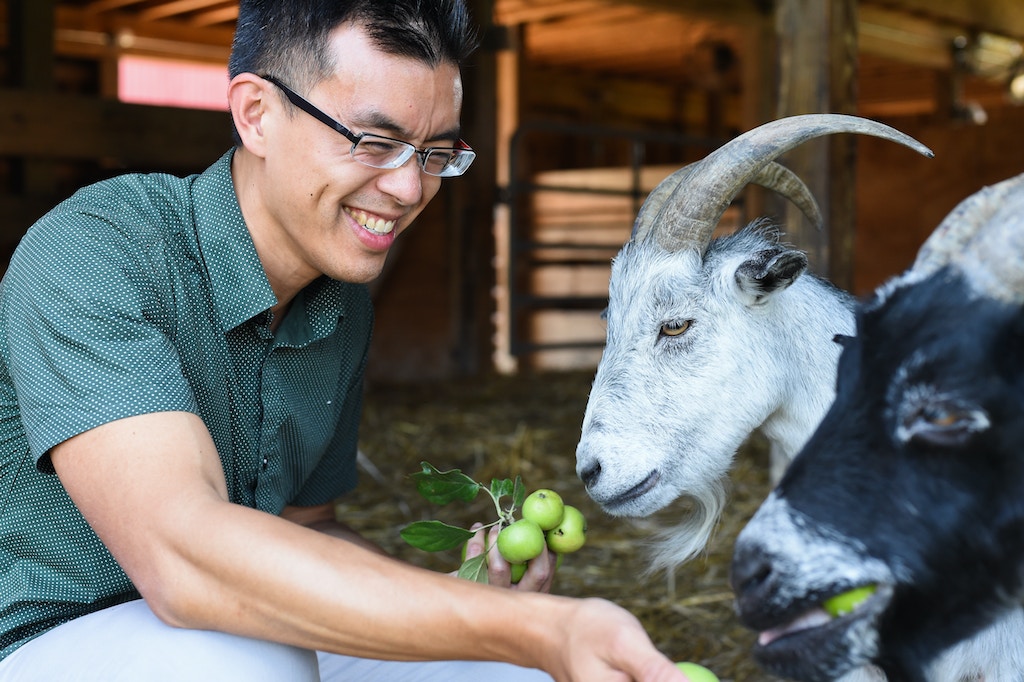 Wayne Hsiung poses for a photograph while feeding goats.

Update: December 7, 2021
On Monday, Wayne Hsiung was convicted of larceny and breaking and entering for his rescue of an ill baby goat from a North Carolina farm, according to a release from Direct Action Everywhere, or DxE. He vowed to appeal the conviction. The DxE release said the verdict sets a troubling precedent for animal liberation efforts.

In recent years, especially since the Black liberation uprisings of 2020, the government has devoted considerable resources and time to the persecution of anti-racist, antifascist activists. The state has disproportionately targeted the far left while letting the far right off easy. All the while, with scant media attention, the decadeslong demonization and criminalization of animal rights activism has continued unabated — and even seen a perturbing escalation.

On Monday, the trial of attorney and animal liberation activist Wayne Hsiung begins in rural North Carolina. He faces felony charges of burglary and larceny, carrying potentially over three years in prison. All this for the act of removing a sick baby goat from a goat meat farm.

The action was filmed and broadcast on social media as an example of what the animal rights movement calls “open rescue” — a tactic by which activists publicly rescue animals from factory farms and bring them to animal shelters. Saving individual, typically ailing animals is an end in itself, but the broader aim is to bring attention to the brutalities of factory farming, especially farms that brand themselves as cruelty free. The suffering rescued animals, according to the activists, give the lie to the notion of benign meat farms.

The hefty charges Hsiung and others now face underline the activists’ point: that current legal standards elevate property over life to an extreme degree. The so-called Green Scare of the 1990s and 2000s, in which the government’s conjured notion of “eco-terrorism” led to the yearslong imprisonment of nonviolent animal rights activists, has evidently not ended.

Hsiung and other open rescuers have faced charges in the past, as The Intercept has reported; until now, his charges had been dropped by prosecutors. The North Carolina trial will be Hsiung’s first. It is part of a rash of other recent felony cases against open rescuers around the nation heading into court.

“The seriousness of these charges, and the amount of state resources going towards these cases, shows how this issue has clearly become a priority, and at a time when the animal farming industry is facing a reckoning in public opinion,” Hsiung, who co-founded the animal rights network Direct Action Everywhere, or DxE, which uses open rescue as its central tactic, told me. “More and more people are ready to conclude that animals, including farm animals, have lives worthy of protection.”

His hope — and it can be no more than hope when facing trial in an agricultural community in a deep-red jurisdiction — is that a jury will affirm the value of saving a suffering animal and thus create an aperture for legal precedents around further animal rights to be established. “We need a change in the paradigm of seeing animals as commodities,” he said. “I’m a believer in the possibility of evolving standards in law.”

Hsiung’s optimism is commendable from a man facing prison for taking one baby goat from a farm and filming it, standing in opposition to the mighty agriculture lobby. The prosecutor who brought the charges against Hsiung in 2018, District Attorney Greg Newman, was without sympathy. “I’m going to treat him like anyone else,” he said of the defendant. “The goat is property, and its health is irrelevant to North Carolina law.”

Newman has since been permanently removed from office after numerous victims of sexual assault accused him of willful and prejudicial misconduct for refusing to hear them in court and protecting powerful alleged abusers. The former DA had more than enough time, however, to bring outsize charges against a goat rescuer. Newman’s replacement, Andrew Murray, has stayed his predecessor’s course against the animal rights activist.

At the very least, Hsiung’s case presents an opportunity to make arguments in court that could bring to bear the tensions and inconsistencies surrounding animals’ legal standing.

“A trial is where rubber hits the road,” Hsiung’s attorney, Jon Frohnmayer, told me. “If we want a place to really examine what human beings are doing to nonhuman animals, this is it.”

Frohnmayer believes that these cases can highlight the “inherent contradictions in our system,” in which laws criminalize actions like open rescue. The laws themselves that pertain to animals, such as laws defining animals as “property” or livestock exemptions to animal cruelty laws, he argues, should be seen to lack democratic legitimacy for excluding the interests and perspectives of nonhuman life.

An array of animal cruelty laws have been on state books for over a century. In several states, however, animals who are to be killed for food are exempt from these cruelty protections. North Carolina is not such a state. Legal scholars have also argued that a so-called necessity defense, which in certain circumstances would allow for a person to break into a stranger’s car with legal justification to save a suffocating dog, could apply in open rescue cases; the logic is the same, and the only difference lies in the power of the agriculture industry.

Meanwhile, nonhuman animals in this country lack the designation of legal personhood, a category enjoyed by corporations and ships. A number of efforts by activists are underway to change this. Indigenous climate struggle leaders are also pushing to see legal personhood granted to environmental features such as rivers.

“A successful necessity defense would fashion limited personhood rights for animals,” Frohnmayer said. He explained that the aim is to establish a “right to rescue” in which “rescue” is “understood as a noun”; that is, not only would a person have a right to rescue an animal from a factory, but also the animal themself, understood as a sentient life, would be deserving of the right be rescued.

Lines of defense in open rescue cases are not necessarily paradigm-shifting. It’s an option, for example, that Hsiung could be found innocent of larceny if it can be proven that the sick goat was of no value to the farmer — an argument that might save Hsiung from prison but shores up the framing of animals as commodities. And there is a considerable risk of precedent being set: A loss in one jurisdiction that rejects arguments from a necessity defense could be used to deny the use of such a defense in other animal rights causes.

Those who undertake the tactic of open rescue would no doubt prefer that the law comes to recognize animals as lives worthy of saving. The movement opposes the meat industry, tout court. Through the rescues of individual, harmed animals, it seeks to also bring attention to what it sees as the impossibility of animal welfare within even supposedly ethical farms. And it is through the cases of these individual animals that precedents could be set around the legal standing of animals.

Whether or not one agrees with animal liberationist desires to end animal agriculture and testing, it remains extreme to suggest that Hsiung deserves prison time for his actions. Even some “victims” of open rescue disagree with such harsh prosecutions. Just a few days before Hsiung’s North Carolina court date, he met with a farmer in rural Utah to participate in a “pardon” for a sick turkey he had rescued from that very farmer’s property. Hsiung had faced felony charges over this rescue, too, but was able to reach a “dismissal by compromise” with the state and the farmer, specifically because the farmer understood the activist’s actions as “just saving lives.”

An uptick in prosecutions against open rescue activists signals a government interest in deterrence — discouraging actions that garner considerable online followings and support. The state’s interests remain aligned with the animal agriculture industry and pharmaceutical giants engaged in animal testing, for whom a sea change in public opinion on animal rights is a major threat.

“For two decades, corporate interests and state and federal government have undertaken substantial efforts to criminalize and prosecute animal rights activism,” said Lauren Gazzola, a longtime animal liberation activist who served 40 months in federal prison in the mid-2000s after being convicted of “animal enterprise terrorism” alongside other members of the Stop Huntingdon Animal Cruelty campaign. Gazzola and other members of the SHAC Seven, as she and her co-defendants were known, were persecuted for what should have been constitutionally protected speech.

As right-wing extremist groups grew in number and rank over the last three decades, the FBI in 2005 named animal and environmental liberationists as the No. 1 domestic terrorist threat facing the nation, despite the fact that these movements had killed no humans or animals.

Prosecutions and major convictions like that of the SHAC Seven had a chilling effect on animal rights activism. Yet as public opinion shifts in favor of animal welfare, networks like DxE believe that it will be harder and harder for the industry and government to criminalize animal rights activists without public backlash. That is not to say that the interests of animal agriculture don’t continue to hold major sway at every level of government, as evidenced in Hsiung’s case, among others in the last decade.

“Given that these defendants are exceedingly non-violent — indeed, they are working to stop massive violence against animals — one might wonder why their activism is deemed such a threat to those interests,” Gazzola told me via email. “Perhaps it is that animal rights and ending the related environmental devastation of animal agriculture are ideas whose time has come.”