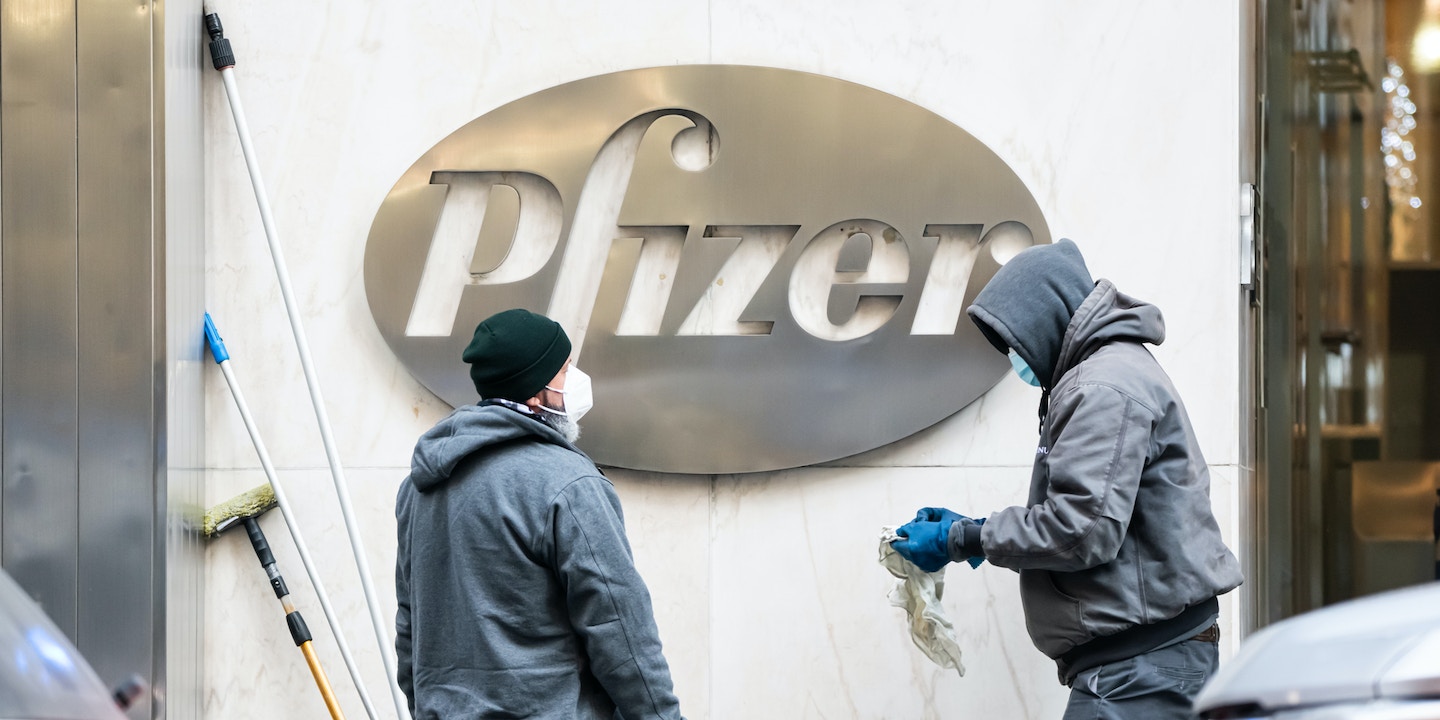 Pfizer and other large pharmaceutical corporations are pushing to block legislation that would make it easier for whistleblowers to hold companies liable for corporate fraud.

In the midst of a dizzying legislative environment, with much attention focused on the Build Back Better debate, major corporate interests, including Pfizer, are fighting an update to the False Claims Act, a Civil War-era law that rewards whistleblowers for filing anti-fraud lawsuits against contractors on behalf of the government.

The law has historically returned $67 billion to the government, with whistleblowers successfully helping uncover wrongdoing by military contractors, banks, and pharmaceutical companies.

The law has been particularly thorny for Pfizer. In 2009, Pfizer paid $2.3 billion in criminal and civil fines to settle allegations that the company illegally marketed several drugs for off-label purposes that were specifically not approved by the Food and Drug Administration. The company instructed its marketing team to advertise Bextra, which was approved only for arthritis and menstrual cramps, for acute and surgical pain issues. The lawsuit, brought under the False Claims Act through the actions of six whistleblowers, ended in one of the largest health care fraud settlements in history.

But the law poses far less risk today to companies engaged in criminal behavior. That’s because the anti-fraud statute has been severely hampered by a series of federal court decisions that radically expanded the scope of what’s known as “materiality.” In 2016, the Supreme Court ruled in Universal Health Services v. United States ex rel. Escobar that a fraud lawsuit could be dismissed if the government continued to pay the contractor.

The court reasoned that if the government continues to pay a company despite fraudulent activity, then the fraud is not “material” to the contract. That ruling functionally neutered application of the False Claims Act against many companies that are so large that the government cannot abruptly sever payments, especially against large health care interests and defense contractors.

What’s more, the federal government has taken an active role in discouraging cases. In 2018, the Trump administration’s Justice Department issued the “Granston Memo,” which encouraged the dismissal of more whistleblower-initiated suits under the False Claims Act.

The erosion of the statute has brought together a bipartisan push, led by Sen. Chuck Grassley, R-Iowa, to update the law to give whistleblowers greater protection against potential industry retaliation and make it more difficult for companies charged with fraud to dismiss cases on procedural grounds.

Earlier this year, as he introduced the legislation, Grassley took to the Senate floor to showcase images of scrapped multibillion Afghanistan War contracts and examples of fraud cases that have escaped accountability because of the judicial constraints placed on the False Claims Act.

“Defendants get away with scalping the taxpayers because some government bureaucrats failed to do their job,” thundered the senator. “In my many years of investigating the Department of Defense, it has taught me that a Pentagon bureaucrat is rarely motivated to recognize fraud. That’s because the money doesn’t come out of their pocket.”

“A Pentagon bureaucrat is rarely motivated to recognize fraud. That’s because the money doesn’t come out of their pocket.”

The legislation, the False Claims Amendments Act of 2021, adjusts the materiality standard to include instances in which the government made payments despite knowledge of fraud “if other reasons exist” for continuing the contract. The bill also expands the anti-retaliation protections of the law, which currently only cover current whistleblower employees of a company. The bill seeks to prevent an industry from blacklisting former whistleblowers seeking employment.

That push has run into a buzzsaw of corporate opposition, some of it disclosed and some of it shrouded from public view. Pfizer hired Hazen Marshall, a former policy director for Senate Minority Leader Mitch McConnell, R-Ky., to lobby on the issue, along with the law firm Williams & Jensen, a powerhouse that employs an array of former congressional staffers.

Pfizer, which has cast itself as a hero in the fight against Covid-19 and a trustworthy corporate citizen, did not respond to a request for comment.

In an initial test vote, the bill was blocked. In August, Grassley proposed his False Claims Amendments Act as an amendment to the bipartisan infrastructure agreement in the Senate. The bill, however, never reached the floor for a vote because of an objection lodged on behalf of Senate Democrats.

In October, the legislation again found a hearing. Sen. Tom Cotton, R-Ark., attempted to erase most of the bill in a Judiciary Committee meeting. The amendment Cotton proposed sought to strike all substantive lines of the bill except for the first title, which is simply the description of the legislation. During committee debate, Cotton argued that the Supreme Court “made the right decision” in the Escobar case and the “continued payment” standard for materiality. The legislation “potentially could increase health care costs,” the senator argued, echoing industry claims that litigation from the False Claims Act would force health care interests to raise prices.

The American Hospital Association reportedly lobbied to delay a vote, but the bill eventually passed 15-7 out of the Senate Judiciary Committee, with the support of Grassley and his main co-sponsor, Sen. Patrick Leahy, D-Vt.

“This is a very concerted lobbying effort that really took our supporters on Capitol Hill by surprise.”

“This is a very concerted lobbying effort that really took our supporters on Capitol Hill by surprise,” said Stephen Kohn, a whistleblower attorney with the law firm Kohn, Kohn & Colapinto.

Many of the companies engaged in the lobbying fight have chosen to conceal their efforts through undisclosed third-party groups such as the U.S. Chamber of Commerce, which has made the Grassley bill one of its primary targets for defeat. The chamber does not disclose its membership or which corporations direct its advocacy, but previous reporting suggests companies such as Halliburton, Lockheed Martin, and JPMorgan Chase, among others that have faced False Claims Act violations in the past.

Other trade groups — including the American Hospital Association, the Healthcare Leadership Council, the Pharmaceutical Research and Manufacturers of America, and the American Bankers Association — have lobbied against the bill without disclosing the companies directing their actions.

The known corporate interests lobbying on the Grassley bill include Pfizer, Amgen, AstraZeneca, Merck, and Genentech. These companies listed the legislation on lobbying disclosures. All five have paid nine-figure settlements over health care fraud brought to light through the False Claims Act.

“Drug companies are notorious for paying kickbacks, giving benefits in exchange for a competitive advantage. Drug companies and health care firms are about 80 percent of the False Claim[s] Act recoveries for a reason,” said Kohn.

In the case of Pfizer’s record settlement, whistleblowers charged that the company promoted Bextra for uses that were not approved by the FDA, placing patients at risk for heart attack and stroke. The company allegedly paid doctors kickbacks for off-label uses. The False Claims Act, like other “qui tam” laws, awards whistleblowers a portion of the money the government recovers from lawsuits.

“Drug companies are notorious for paying kickbacks, giving benefits in exchange for a competitive advantage.”

“The whole culture of Pfizer is driven by sales, and if you didn’t sell drugs illegally, you were not seen as a team player,” said John Kopchinski, one of the Pfizer whistleblowers, following the settlement.

The Grassley initiative is championed by a diverse array of watchdog groups over government waste. Taxpayers Against Fraud, the National Whistleblower Center, the Project on Government Oversight, and the Government Accountability Project are among the groups officially supporting the update to the anti-fraud law.

But advocates have expressed confusion over the involvement of several other supposed taxpayer protection organizations. Citizens Against Government Waste and Americans for Tax Reform, two conservative groups that do not disclose donor information, filed a letter to lawmakers urging them to vote down the Grassley measure.

Despite Citizens Against Government Waste’s official focus on fighting government waste, the very intent of the False Claims Act, the group’s lobbying arm argued in a letter that the bill was not appropriate for inclusion in the infrastructure package because it is “not related to traditional infrastructure” and the bill is not fully “understood by the 95 senators who have not cosponsored” the legislation. Americans for Tax Reform similarly argued that the legislation had not “received proper debate.”

Neither Citizens Against Government Waste nor Americans for Tax Reform responded to a request for comment explaining why they have lobbied so aggressively against taxpayer protection legislation and whether any donor interests are involved.