Mutulu Shakur at ADX Florence taken in the 1990s by filmmaker Lee Lew.

Mutulu Shakur was not sentenced to die in prison, but die in prison he may. The 71-year-old icon of Black liberation struggle has been incarcerated for over three decades. The rules governing his 1988 sentencing set his presumed release date for 2016. Yet, despite an impeccable institutional record, he has been denied release by the federal parole commission nine times. He remains behind bars, while an incurable cancer is now spreading through his bone marrow.

Reforms and policy shifts in certain state parole systems, including New York’s, have seen the long overdue release of a number of aging former Black Panthers like Herman Bell and Jalil Muntaqim in recent years. Held in the federal system, however, longtime prisoners like Shakur face further layers of institutional intransigence and procedural arcana.

Shakur, the stepfather of the late rapper Tupac Shakur, was convicted of racketeering conspiracy charges alongside a number of Black liberationists and leftist allies for his involvement in the 1981 robbery of a Brink’s armored truck during which a guard and two police officers were killed. He was also convicted for aiding in the prison escape of Assata Shakur.

“He has been praised by current and former Bureau of Prisons staff, and BOP’s own assessment tools establish that he poses absolutely no risk.”

A member of the Black nationalist organization Republic of New Afrika who worked closely with Black Panther Party members and New Left activists, Shakur was at the forefront of liberatory struggle. As a renowned acupuncturist, he was a central figure in the movement to bring holistic health care and self-determination to Black residents in the Bronx in the 1970s, blighted as the New York City borough was by police violence, poverty, and heroin addiction. That landed Shakur in the crosshairs of the federal government’s malicious COINTELPRO campaign to decimate racial and social justice movements.

Yet the demand for his release now has nothing to do with the political underpinnings of his arrest, trial, and conviction. If any party is displaying ideological excesses, it is the federal justice system apparently acting against its own standards in the case of a Black liberation elder.

“Dr. Shakur is a 71-year-old man who has been imprisoned for over 35 years, undergoing treatment for bone marrow cancer,” Shakur’s attorney, Brad Thomson of People’s Law Office, told me. “He has been praised by current and former Bureau of Prisons staff, and BOP’s own assessment tools establish that he poses absolutely no risk, should he be released.”

Shakur is aging and ill. He has served his extensive prison time and has accepted full responsibility for his actions. Like other long-imprisoned Black liberation elders, including Mumia Abu-Jamal and Sundiata Acoli, the alleged grounds for Shakur’s continued incarceration are without merit, even according to the purported logics of our brutal criminal legal system. The Department of Justice’s own risk assessment tool categorizes Shakur at the absolute lowest risk of recidivism; the rates of reoffending for people in his age group are already vanishingly small.

A top oncologist’s recent medical declaration on the state of Shakur’s health stated that, even with ameliorative cancer treatment, he would likely die within two to three years; in the highly possible event that treatment fails, Shakur is expected to live fewer than 11 months. His mandatory release date is in 2024, but his family, friends, and supporters believe he cannot survive that long. With an accordant sense of urgency, Shakur’s legal team is currently trying every available legal, statutory, and bureaucratic avenue to see him released.

“Due to bureaucratic and administrative failures, arbitrary abuses of discretion, and inconsistent applications of the law, Mutulu and most others in his position have been denied the relief that were designed for them,” said Thomson.

Shakur was incarcerated in the federal system under a set of harsher sentencing guidelines, known as “old law,” because he was convicted for crimes that took place before 1987, when the guidelines changed.

Those convicted under “old law” and eligible for parole remain beholden to a moribund body known as the U.S. Parole Commission. The commission was intended to be phased out decades ago: The new sentencing guidelines eliminated parole for defendants convicted of post-1987 federal crimes, dramatically decreasing the need for the federal commission.

The cases of fewer than 200 people sentenced under “old law” and eligible for parole — all of whom are aging and many of whom, like Shakur, are infirm — remain under the discretion of the commission. Only two federal parole commissioners make all the decisions, and they do so with a vested interest in keeping those imprisoned under “old law” inside to justify the commission’s very existence.

Their stated reasons for denying Shakur parole have been no less than absurd. They said, for example, that Shakur lacked the appropriate remorse for his actions and remained a threat to the general public because he had signed off letters to friends and supporters with the phrase “stiff resistance” — the very resistance to injustice that has made Shakur a trusted mentor to dozens of formerly incarcerated men.

Steven Hinshaw, one of the numerous men who found a mentor in Shakur while imprisoned alongside him, told me how Shakur was unique in his ability to break through the extreme race-based gang segregation encouraged in federal prisons. Hinshaw, who is white and has mixed-race children, now works as a truck driver and owes his determination to Shakur’s inspiration. “Anyone who has been in the yard with him knows that he solves problems and builds bridges,” Hinshaw told me. “He has a gift for helping people see themselves.”

The commissioners also cited an alleged “serious” violation: He was put on loudspeaker during a call with a professor and her class in 2013. It’s not clear why this constituted a violation, let alone a serious one. That the subject of the class was Shakur’s support for the founding of a truth and reconciliation commission in the United States — to reckon, through peaceful conflict resolution, with histories of racism — made for a grim irony.

A letter signed by numerous civil rights organizations urging President Joe Biden to grant “corrective clemency” to “old law” federal prisoners described the U.S. Parole Commission as “an abusive and insurmountable barrier to any hope of due process or release.”

“‘Old law’ prisoners like Dr. Shakur have essentially fallen through the cracks,” Shakur’s attorney, Thomson, told me. “Due to administrative failures, the laws establishing how and when ‘old law’ prisoners should be released are not being followed, and there is almost no accountability for these failures. Meanwhile, many new reforms are not being retroactively applied to prisoners sentenced under the ‘old law.’” 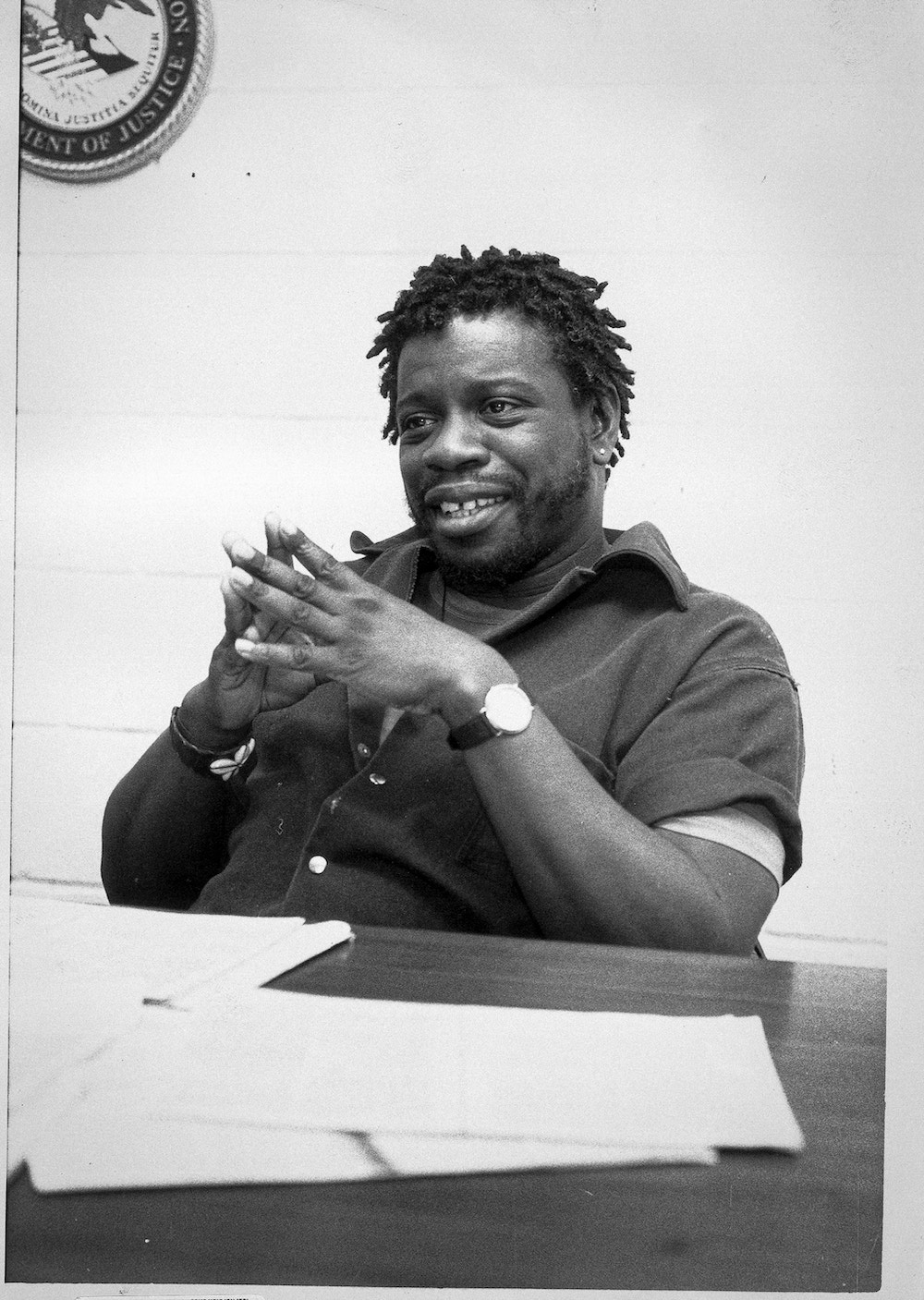 An antiquated parole commission has not been Shakur’s only barrier to freedom. Alongside his numerous parole denials, an application for Shakur’s compassionate release was rejected by a judge last year. At the time, the judge noted that Shakur had “tolerated chemotherapy with no adverse effects,” but his body was nonetheless ailing: hypertension, Type 2 diabetes, glaucoma, and the aftereffects of a 2013 stroke, not to mention the high risk of contracting Covid-19 in prison. Studies have found that longtime incarceration ages a person by a decade. Shakur did indeed contract Covid-19 last year, from which he recovered. His cancer, though, once in remission, has returned.

The judge who denied Shakur’s compassionate release in effect told the aging prisoner to reapply only when he was at death’s door. These were the conditions, after all, under which Shakur’s co-defendant Marilyn Buck, who was convicted on the same charges, was released on July 15, 2010. She died of uterine cancer on August 3 that year.

“Should it develop that Shakur’s condition deteriorates further, to the point of approaching death, he may apply again to the Court, for a release that in those circumstances could be justified as ‘compassionate,’” wrote Judge Charles Haight Jr. in his decision.

Haight was no impartial arbiter: Thanks to the vagaries of the federal system, the judge tasked with ruling over Shakur’s compassionate release request was the very same judge who sentenced him to prison over three decades ago. Haight was 90 years old when he last ruled against Shakur’s release.

Following the return of Shakur’s cancer, his legal team has again applied for compassionate release, but they are not relying on this single avenue for his freedom.

Shakur has been denied a staggering 976 days of earned good time, which he is owed.

Shakur’s attorneys and several legal scholars also believe that he could be freed without relying on the unbounded discretion of the parole commission or the judge. He should, they argue, be released immediately based on no more than the correct calculation of so-called good time credit to reduce time served.

Shakur is an “old law” prisoner but has not been credited with the appropriate “good time” days as required by “old law” rules. According to his legal team, Shakur has been denied a staggering 976 days of earned good time, which he is owed. Once properly accorded to him, he would be eligible for immediate release. Shakur is in an administrative remedy process to get this time restored.

A spokesperson from the Bureau of Prisons told me by email that “any inmate who believes their ‘good time’ is inaccurately calculated, may file a formal complaint on the matter” but declined to comment on any specifics regarding Shakur’s case.

Shakur and his team have yet to hear back about either his “good time” calculations or his request for compassionate release.

“I don’t see what they’re not seeing. They’re disregarding him as a person,” said another of Shakur’s numerous formerly incarcerated mentees, Anthony Jordan, of the authorities keeping his mentor behind bars. For eight years, 33-year-old Jordan was imprisoned in the same unit as Shakur, whom he describes as an “inspiration, an uplifting spirit beyond words.” Jordan added, “He’s been incarcerated my whole life. I can’t comprehend it. I can’t imagine how that must feel.”

No one, least of all a community healer like Shakur, should have to.