The pandemic has revealed how reporting on what happens in hospitals can have a real impact on public health. 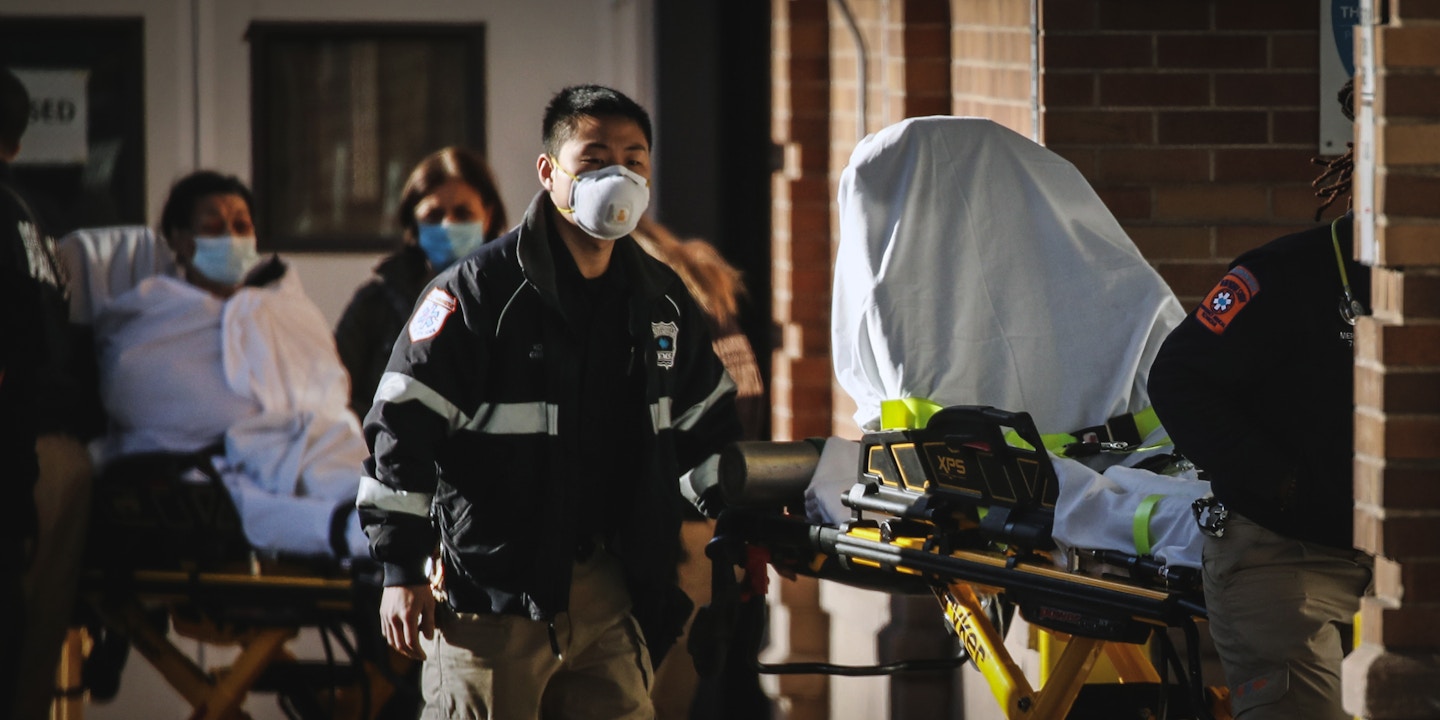 Michael Dowling made an unorthodox move when the Covid-19 pandemic got underway. Dowling is the chief executive of the largest hospital network in New York, and he decided that instead of barring journalists from Northwell Health’s facilities, he would let a documentary team inside one of its hospitals.

A prominent figure in the U.S. health care industry, Dowling was making a radical break from other CEOs. As people stricken with Covid-19 began to perish, most hospitals closed their doors to journalists, claiming that patient privacy had to be protected and that outsiders who weren’t medical professionals might contract the virus or get in the way of their swamped staffs. Dowling had been a top health official in New York during the AIDS epidemic and didn’t think that it would be a problem.

The journalists he let inside Long Island Jewish Medical Center were led by an award-winning director, Matthew Heineman, whose just-released documentary, “The First Wave,” is being hailed for its up-close realism of a hospital at the pandemic’s outset. There were none of the disasters that other hospital executives claimed to fear if they granted access to journalists: No violations of patient privacy occurred, none of Heineman’s team contracted the virus, and the hospital’s staff has warmly embraced the film.

With the Omicron variant starting to overwhelm the U.S., the lessons learned from Northwell’s experience are timely in the extreme: hospitals do not have valid excuses for keeping journalists out, and letting reporters inside will confront skeptics with graphic evidence that might sway some of them.

In an interview with The Intercept, Dowling became the first senior executive in the health care industry to say publicly that it was a mistake for hospital leaders to stand in the way of journalists trying to report on the fatal seriousness of Covid-19.

“I think they were unsure whether they can trust what goes on inside their organization,” Dowling said. “They were wondering, ‘Well, this is dangerous, why would you do that, you’ll never know what will come of it, this could be a disastrous [news] report, it could all be negative about mistakes that are made.’” He added, “But that’s the risk you take, and I’m not afraid of taking risks like this. Because I believe, especially in this case, telling the real story was important.”

As previously reported by The Intercept, the general exclusion of journalists from U.S. hospitals early in the pandemic meant that there were scant photos or videos of patients afflicted with the virus. This paucity of graphic imagery came at a malleable time when Americans were making up their minds on whether lockdowns and other anti-Covid measures were truly necessary. While it is impossible to say whether stronger visual evidence would have diminished the skepticism that took root in the early days, a number of academics and doctors believe that would have been the case.

The pandemic has exposed how the documentation of what’s unfolding in an emergency room or intensive care unit can have a real impact on public safety and national politics. In less fortunate countries that have been consistently rattled by war or natural disasters, hospitals are common locations of newsgathering, because that’s where the casualties and their truths are found. If climate change and political turmoil in the U.S. lead to a greater number of mass casualty events, hospitals will increasingly become contested spaces where corporations come into conflict with journalists trying to report the news that’s unfolding behind their closed doors.

The head of the American Hospital Association, Richard Pollack, declined an interview request for this story. The AHA provided a vague statement from Nancy Foster, its vice president of quality and patient safety policy, who noted that the Centers for Disease Control and Prevention and other health authorities recommended that hospitals restrict outsider access to prevent the spread of Covid and that even family members were not let inside at the pandemic’s outset. “Media visitation policies always prioritize patient safety and privacy, along with whether hospitals have the material and staffing resources to ensure members of the media can visit safely and without unduly disrupting patient care,” her statement said. CEO of Northwell Health Michael Dowling poses with nurses, doctors, and other staff during an event at the Long Island Jewish Medical Center in New Hyde Park, N.Y., on April 23, 2020.

Hospitals are big business. The largest network in the country, HCA Healthcare, had revenues of more than $51 billion in 2020, and its CEO was paid more than $30 million that year. The educational and professional profiles of the industry’s CEOs tend to be little different from those in other fields: While some have medical backgrounds, most worked their way to the top as managers and began their careers with business degrees. The prospect of letting journalists roam around their facilities during a pandemic is about as welcome to them as it would be for executives at Facebook or Exxon Mobil to let reporters attend strategy meetings during a public relations crisis.

In most ways, Northwell is a typical health care company. Like many, it is structured as a nonprofit, though the business practices of these nonprofits are largely indistinguishable from for-profit networks. Dowling is paid very well for his services — more than $4 million in 2019, according to the latest salary information available, and 14 other executives at Northwell earned in excess of $1 million that year. The company has acted aggressively to collect unpaid bills: In 2020, as most hospitals in New York ceased legal actions against overdue patients because of the pandemic, Northwell sued more than 2,500 people for an average of about $1,700 plus interest, according to the New York Times, which described it as “a flood of litigation even as the pandemic has led to widespread job losses.” (A Northwell spokesperson told The Intercept that more than half of those suits were filed by hospitals affiliated with the network but not owned by it.)

When it comes to media relations, Northwell is an outlier. In the 1980s and 1990s, Dowling was a senior official in Gov. Mario Cuomo’s administration, serving as health director and deputy secretary to the governor, which means that Dowling came into health care management after public service rather than business school. “I spent 12 years in government where I was in front of the media all the time,” Dowling recalled. “I was not uncomfortable with that at all.”

In 2001, Dowling was selected as the leader of what was then called North Shore-LIJ Health System, which in 2016 was rebranded as Northwell Health; the company now has more than 75,000 employees and annual revenue of about $15 billion. Dowling has become the most visible executive in New York’s hospital industry — according to the LexisNexis database, he was mentioned in far more news articles from 2018 to 2020 than the CEOs of other hospital systems that are more famous, such as Memorial Sloan Kettering, NYU Langone Health, and Mount Sinai Health System. Dowling even has an active Twitter account, unlike the other CEOs.

His profile during the first year of the pandemic was enhanced by a close association with Gov. Andrew Cuomo, the son of Dowling’s former boss. Dowling assumed an unofficial position as Cuomo’s top Covid adviser in the private sector, often appearing at press conferences with him. When the time came for the first FDA-approved doses of the Covid vaccine to be delivered at the end of 2020, a nurse and doctor at Northwell were selected to receive them — a boon for the company’s profile, as the event was broadcast live by CNN and showed Dowling standing beside nurse Sandra Lindsay and Dr. Yves Duroseau. 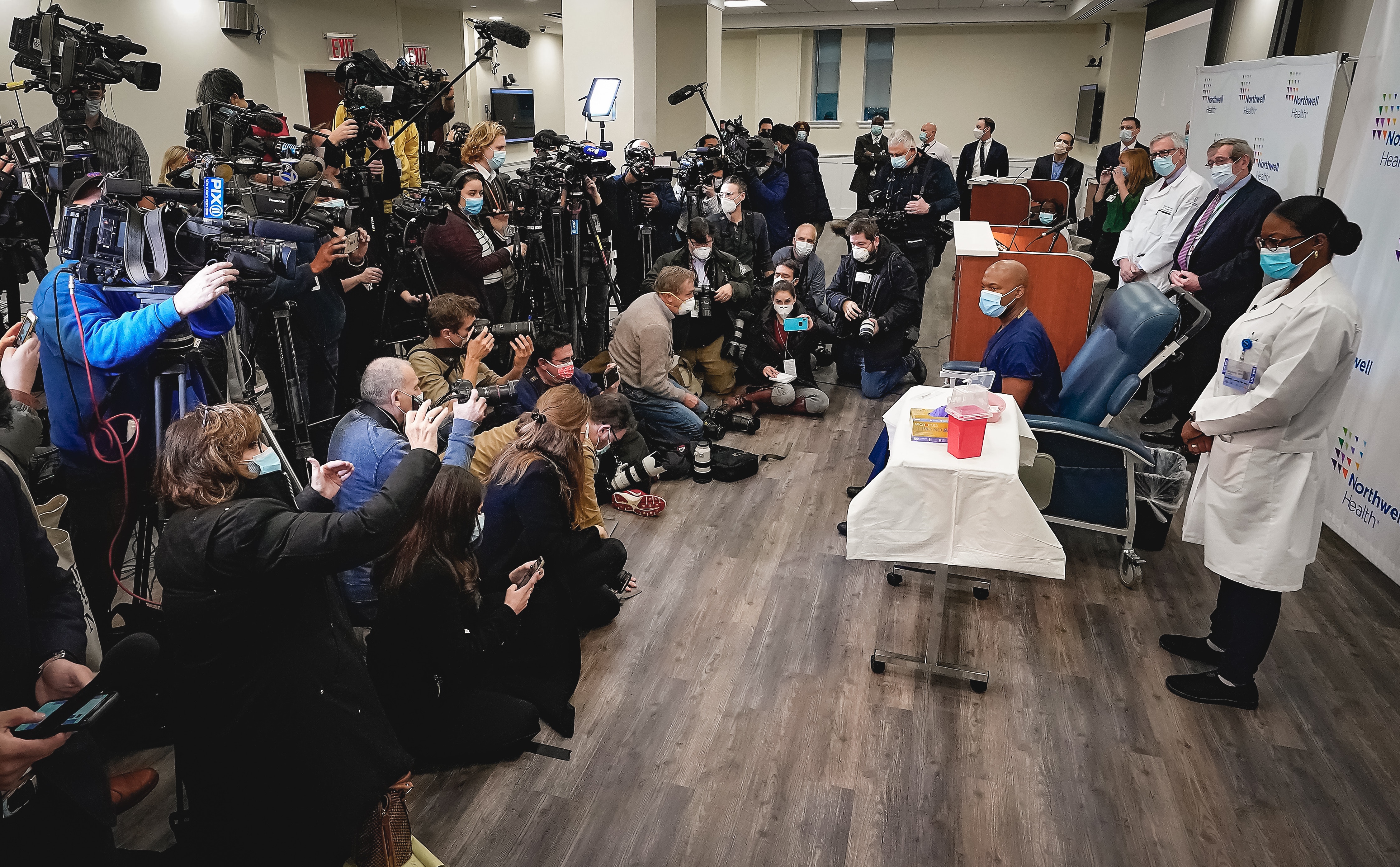 Practice for a Pandemic

In what turned into an unintended dry run for the pandemic, Northwell gave a green light in 2017 for a documentary team to film at its Lenox Hill Hospital. The team worked there until the end of 2019 and crafted an eight-episode series for Netflix called “Lenox Hill” that came out in 2020. An extra episode was added after the team was allowed to return to Lenox Hill as the pandemic began. So at the start of the Covid-19 crisis, Dowling actually had two teams of independent journalists inside his hospitals: one at Lenox Hill, the other at Long Island Jewish.

“This was not a big leap for us at all,” he said. “We have been doing these kinds of things for years.”

A key concern expressed by hospitals is that a journalist might disclose the name or identity of a patient without their consent, violating the privacy law known as HIPAA and potentially leading to heavy fines. But there’s a simple workaround that Northwell reached with the Netflix team and with Heineman’s team: The hospital was allowed to view a rough cut of their work before broadcast to make sure that every patient who was identified had given their consent.

“We had gone through that experience, we knew the protocols that would have to be followed, we knew the privacy issues that we had to deal with,” Dowling said. “I had other hospital CEOs say to me, ‘Man, this is crazy that you allow people to sit in your hospital watching everything that goes on full time for months on end.’ My attitude is, I’m OK with it.”

Most CEOs were not OK with it. Their decisions to ban reporters, taken one by one and with an impact that was collective, helped turn the sudden battle against Covid-19 into a long war with hundreds of thousands of victims whose terrifying plight could not be witnessed. This spared Americans from the medieval inconvenience of seeing the suffering and death of a plague in their midst. In its first months, the pandemic was defined by empty streets and grounded planes, by 6 feet of distance between nervous people, and by the strained faces of hospital workers who were swamped and frightened.

The enemy was microscopic, and its victims were invisible.