The “disinformation doctors” are expanding, even as Congress and state medical boards scrutinize the operation and the group’s founder, Simone Gold. America’s Frontline Doctors, an organization that has been widely criticized for spreading false information about Covid-19 vaccines and advocating for potentially dangerous replacements, is expanding. According to a newsletter the group sent to its supporters last week, “AFLDS is opening its first medical clinic in the coming months, with many more planned shortly after.” The email includes a link to forms that can be filled out by doctors and nurses who want to work with AFLDS, and pharmacists who want to fill prescriptions for unproven Covid-19 medications, so they can become part of the AFLDS network.

The expansion comes amid increased scrutiny of AFLDS from the media, Congress, and the Medical Board of California. Doctors associated with AFLDS have prescribed hundreds of thousands of patients hydroxychloroquine and ivermectin through a telemedicine service, hacked records obtained by The Intercept revealed in September. And the network of online health care companies associated with AFLDS have charged patients millions of dollars. In October, citing The Intercept’s report and related reporting by Time magazine, the House Select Subcommittee on the Coronavirus Crisis announced an investigation into AFLDS and the companies it works with, calling them “predatory actors” that have been “touting misinformation and using it to market disproven and potentially hazardous coronavirus treatments.”

Pressure has been mounting for the California medical board to strip AFLDS’s founder, Simone Gold, of her license in the state. Gold, who was arrested and charged after the deadly attack on the U.S. Capitol on January 6, refers to Covid-19 vaccines as “experimental biological agents.” The Intercept confirmed that the board is actively investigating Gold, though it declined to share further information about the investigation or make any statements about Gold, saying that such matters are confidential until the state attorney general’s office files a complaint.

Earlier this month, the president of California’s medical board, Kristina Lawson, alleged that people who identified themselves as members of AFLDS followed and intimidated her. Lawson described the ordeal in a Twitter thread. She said the group parked an SUV at the end of her driveway in Walnut Creek, flew a drone over her house, watched her children drive to school, and then followed her to work. When she left work, she said four men “ambushed” her in a dark parking garage with cameras, saying they wanted to interview her. Lawson said they never contacted her, the medical board’s press office, or her company asking for an interview through professional channels. “I’m not going to be intimidated by these terrorizing tactics,” Lawson told MSNBC, noting that she has since hired private security. The California board declined to answer specific questions from The Intercept about the incident.

? On Monday, I was followed and confronted by a group that peddles medical disinformation, promotes fake COVID-19 treatments, and is under investigation by Congress for stealing millions of dollars from consumers. It was a terrifying experience. /1

AFLDS did not respond to a request for comment.

In July, the Federation of State Medical Boards, the national organization representing all U.S. state medical boards, issued a statement saying that “physicians who generate and spread COVID-19 vaccine misinformation or disinformation are risking disciplinary action by state medical boards, including the suspension or revocation of their medical license” and that “spreading inaccurate COVID-19 vaccine information contradicts that responsibility, threatens to further erode public trust in the medical profession and puts all patients at risk.”

Last week, an organization founded by emergency room doctors working on the frontlines of the Covid-19 pandemic, No License for Disinformation, released a scathing new report urging state medical licensing bodies to investigate doctors who deliberately spread misleading or false Covid-19 information and hold them accountable. “State medical boards must act immediately to support the overwhelming, evidence-based medical consensus, stop the attack on science and medicine, and most importantly, prevent further unnecessary COVID-19 deaths,” the report, published in collaboration with the public health nonprofit the de Beaumont Foundation, states.

The report argues that a “small but vocal minority of physicians” — including those affiliated with AFLDS — “are intentionally and publicly spreading disinformation about COVID-19 and vaccines.” They are “putting lives at risk and violating their professional oath,” the report says, noting that state medical boards have so far failed to act. Nine out of 10 Americans believe that doctors who intentionally mislead the public about Covid-19 and vaccines should be held accountable, according to a poll included in the report, and 91 percent believe that doctors do not have the right to intentionally spread misinformation or false health information.

In addition to the telemedicine provider SpeakWithAnMD, which The Intercept has previously reported on, AFLDS is also now using a second telemedicine platform, GoldCare Telemed. When visitors request medication through the AFLDS website, those who self-report symptoms are directed to SpeakWithAnMD, and asymptomatic people are sent to GoldCare Telemed, a new website set up in late November. The two sites appear to be using the same underlying platform. Like SpeakWithAnMD, GoldCare Telemed includes a disclaimer requiring patients to acknowledge that public health organizations deem ivermectin and hydroxychloroquine “Highly Not Recommended.” 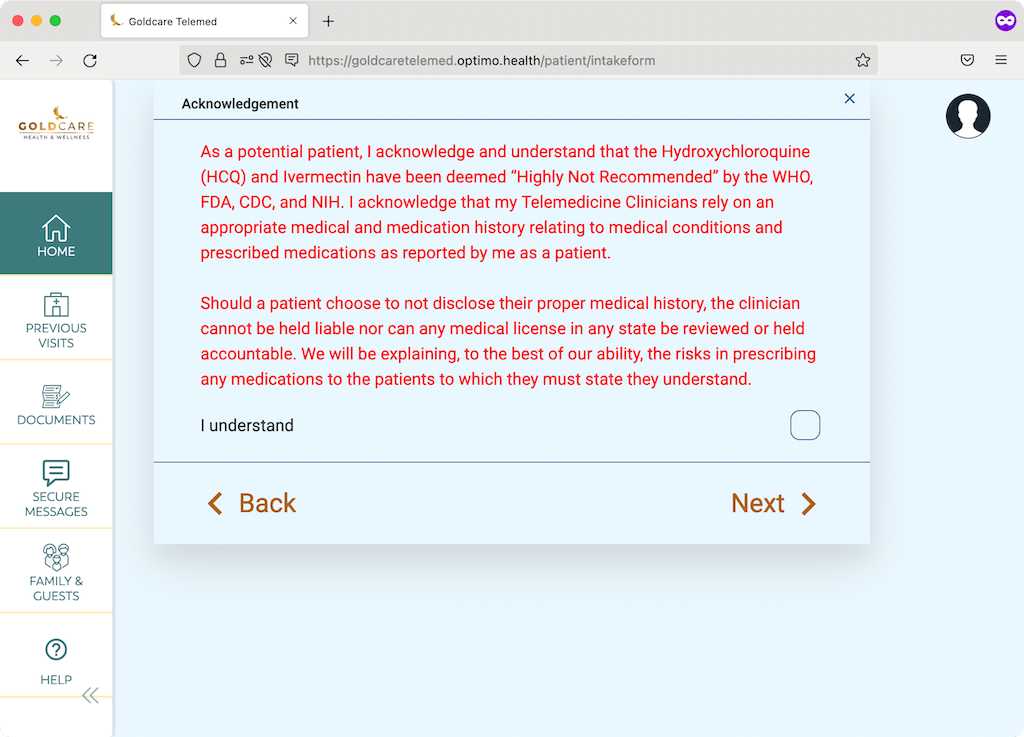 AFLDS’s efforts have even edged their way into Pennsylvania’s state legislature. In July, Republican state Rep. Dawn Keefer introduced a bill in the Pennsylvania legislature that would allow doctors to prescribe ivermectin and hydroxychloroquine to treat Covid-19, despite both being ineffective at treating the virus, and would require pharmacists to dispense these medications.

The bill came up for debate last Monday. Dr. Robert Schmidt, a family medicine doctor who falsely claimed that hydroxychloroquine was an effective treatment for Covid-19 and brought up a discredited theory about ivermectin use in the Indian state of Uttar Pradesh, cited the story of Darla and Keith Smith. On November 10, the Pennsylvania couple both tested positive for Covid-19. It’s not known if they had been vaccinated against the virus. “We both did teleconsults with America’s Frontline Doctors and we both got ivermectin scripts approved, but it never came in the mail,” Darla told a local ABC News station. Keith, 52, was hospitalized. His condition deteriorated, and by November 21 he was transferred to the intensive care unit. When doctors at UPMC Memorial refused to treat him with ivermectin because it was not part of the hospital’s Covid-19 protocols, Darla sued the hospital and won.

On December 5, a nurse administered ivermectin to Keith, who at this point was in a medically induced coma, through his feeding tube. After he received a second dose, the doctor overseeing his ivermectin administration ended the treatment because his condition had deteriorated. Last Sunday, a week after receiving ivermectin, Keith Smith died of Covid-19.