The U.S. Military Is a Machine of Impunity

Wartime savagery requires that its perpetrators are told that their actions are acceptable — maybe heroic — and must not cease. 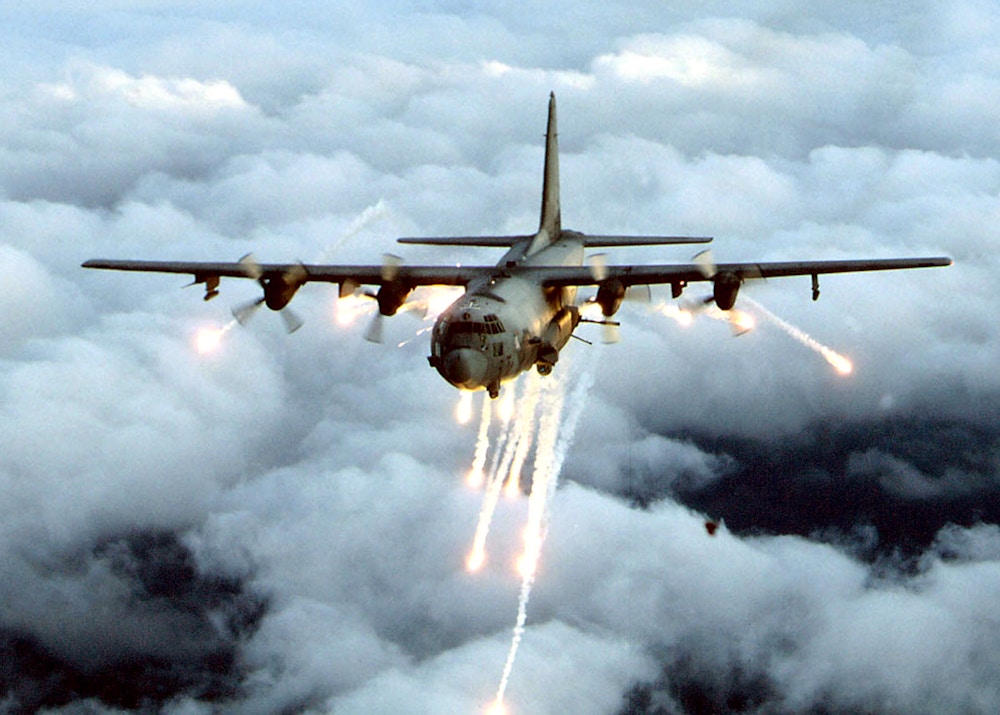 An Air Force AC-130 gunship in an undated photo.

My education in wartime savagery started in Bosnia in the 1990s. Reporting on the war, I visited death camps, saw civilians get shot and beaten, interviewed torturers, and was arrested multiple times for being in the wrong place and asking too many questions. Despite all of that, I sensed at the time that my Balkan lessons were incomplete — and those instincts have been confirmed by the past 20 years of U.S. warfare in Afghanistan, Iraq, and Syria.

We tend to associate barbarism with the kind of things I saw in Bosnia: close-quarters violence in which the perpetrators look into the eyes of their victims and leave the fatal encounter with drops of blood on their boots. That’s an inadequate understanding because it excludes the killing-from-a-distance that is now central to America’s forever wars, which have increasingly moved away from ground combat. According to the nonprofit organization Airwars, the U.S. has conducted more than 91,000 airstrikes in seven major conflict zones since 2001, with at least 22,000 civilians killed and potentially as many as 48,000.

How does America react when it kills civilians? Just last week, we learned that the U.S. military decided that nobody will be held responsible for the August 29 drone attack in Kabul, Afghanistan, that killed 10 members of an Afghan family, including seven children. After an internal review, Secretary of Defense Lloyd Austin chose to take no action, not even a wrist slap for a single intelligence analyst, drone operator, mission commander, or general. Pentagon spokesperson John Kirby bizarrely said, “We acknowledge that there were procedural breakdowns” but that “it doesn’t necessarily indicate that an individual or individuals have to be held to account.”

There has been quite a lot of savagery-adjacent news to absorb this month. The New York Times just published a two-part series by Azmat Khan, based on military documents, revealing that U.S. bombings since 2014 have consistently killed civilians but that the Pentagon has done almost nothing to discern how many were harmed or what went wrong and might be corrected. As Khan noted, “It was a system that seemed to function almost by design to not only mask the true toll of American airstrikes but also legitimize their expanded use.”

Savagery consists of more than the act of killing. It also involves a system of impunity that makes clear to the perpetrators that what they are doing is acceptable, necessary — maybe even heroic — and must not cease. To this end, the United States has developed a machinery of impunity that is arguably the most advanced in the world, implicating not only a broad swathe of military personnel but also the entirety of American society. Impunity tends to begin at the top. No American general has been disciplined for overseeing the catastrophic wars in Afghanistan and Iraq, nor for lying to Congress about these disasters. The opposite has occurred: Stars have usually been added to their shoulders, and when they retire from the military, they tend to march into well-paid positions as board members in the weapons industry or elsewhere (even though they are not strapped for resources, thanks to pensions that can reach $250,000 a year). The reputation-protection racket is so galling that an Army officer who served two tours in Iraq wrote a now-famous article in 2007 that noted: “A private who loses a rifle suffers far greater consequences than a general who loses a war.”

We should not be surprised. We are a society that excels in elite unaccountability. Just look at the number of bank CEOs who faced criminal charges after the 2008 financial collapse (zero), or the number of Sackler family members who were criminally charged after their company, Purdue Pharma, started the opioid epidemic with OxyContin (also zero), or the number of billionaires who avoid paying income taxes (lots of them). And let’s not forget the politicians and pundits who goaded America into an illegal invasion of Iraq in 2003 and suffered no consequences. It’s not clear who takes their cues from whom, but it is obvious that all of these elites benefit from the con.

Military impunity is somewhat unique because it stretches downward, too. If an intelligence analyst or drone operator or fighter pilot follows orders and procedures for an airstrike that kills dozens of civilians in a wedding party — which has happened — they need to be excused of wrongdoing. After all, who gave the orders, and who set the procedures? These questions would require looking up the chain of command, and for that reason, they are not asked with any intention of finding the answers. That’s why it was with no sense of alarm that secret military documents published by The Intercept in 2015 noted that in a two-year campaign called Operation Haymaker, 9 of 10 Afghans killed in U.S. drone strikes were not the intended targets. For the U.S., this was the acceptable cost of doing business.

The Pentagon’s culture of impunity for killing civilians stands in contrast to its zealous pursuit of soldiers for other offenses.

The Pentagon’s culture of impunity for killing civilians stands in contrast to its zealous pursuit of soldiers for other offenses. Unlike the Securities and Exchange Commission, which regulates the financial industry, or the IRS, which oversees taxpayers, or the Senate and House ethics committees, which keep an eye on members of Congress, the U.S. military has wide authority and deep resources to impose an array of penalties, from pay reductions to loss of rank and death sentences. The military avidly uses these powers, too. In 2020 alone, there were more than 37,000 cases of discipline in the armed forces, and since 2001, there have been more than 1.3 million cases.

Yet these powers have been used sparingly or not at all when it comes to airstrikes that kill civilians. One of the worst massacres in two decades of warfare occurred not long ago, on March 18, 2019, when U.S. warplanes dropped bombs that killed scores of civilians, mostly women and children, in an Islamic State enclave in Syria. The carnage was immediately apparent. As the Times reported last month, an analyst who watched the attack on a drone video typed into a secure chat system, “Who dropped that?” Another analyst wrote, “We just dropped on 50 women and children.” A quick battle assessment settled on 70 people killed.

A legal officer flagged it as a possible war crime that warranted an investigation, the Times noted, “but at nearly every step, the military made moves that concealed the catastrophic strike.” The Pentagon’s inspector general looked into what happened, but even its report was “stalled and stripped of any mention of the strike.” An evaluator who worked on the inspector general’s report, Gene Tate, was forced out of his job after complaining about the lack of progress and honesty. Tate told the Times: “Leadership just seemed so set on burying this.”

I could go on for thousands of words describing other airstrikes that killed civilians and resulted in no discipline or slight reprimands that were issued only after embarrassing reports from news organizations and human rights groups. For instance, there was a 2015 airstrike on a hospital in Kunduz, Afghanistan, that killed 42 patients and staffers; the military’s reluctant discipline included counseling and retraining for some of the personnel involved. The point is this: A military establishment that has enthusiastically enforced requirements for things as petty as wearing a reflector belt while jogging has consistently failed to discipline soldiers for wrongful bombings that its own battle assessments acknowledge have killed civilians.

The machinery of impunity actually has two missions: The most obvious is to excuse people who should not be excused. The other is to punish those who try to expose the machine, because it does not function well in daylight. That’s why Daniel Hale, an Air Force veteran whom the government accused of leaking those classified drone documents to The Intercept, was sentenced under the Espionage Act to nearly four years in prison. It is not the act of killing civilians that will result in definite and heavy punishment, but exposing the act of killing. A hospital run by Doctors Without Borders after a U.S. airstrike in Kunduz, Afghanistan, on Oct. 16, 2015.

In 1992, I interviewed a Muslim girl in Bosnia who had been raped. “The Višegrad warlord took a fancy to her,” I later wrote, “and one night dragged her and her younger sister away from their mother, who of course was crying hysterically and holding onto the legs of the warlord, who kicked her away and shouted, ‘I am the law.’”

The warlord’s name was Milan Lukić, and he was one of the most evil men in a war that had a surplus of them. He killed women and children with particular ruthlessness, one time setting fire to a house in which 59 civilians were sheltering; they all perished. But Lukić was saying one honest thing when he kidnapped the sisters: He was the law. His paramilitary thugs had a monopoly on violence in Višegrad and the full support of Serb political and military authorities. At the time, I didn’t imagine that their crimes would catch up with any of them.

My interest right now is in the durability of these machines of impunity, not the comparative depravity of the crimes they protect (what happened in Bosnia was genocide). It seems ridiculous to think that the U.S. military’s cover-ups will be undone. The Pentagon is now getting even more support from the country in a form that is easy to measure and crucial to sustaining its clout: funding. Congress has just passed a military budget of $768 billion, which is more than was allocated in 2020, even though U.S. troops withdrew this year, in a humiliating fashion, from their forever war in Afghanistan. Despite what has happened, America’s elected representatives are not loosening their protective embrace of the Pentagon.

Yet the impunity that seemed eternal in Bosnia turned out to be short-lived, at least for the elites of criminality. Lukić is now in prison with a life sentence, thanks to his conviction at the International Criminal Tribunal for the former Yugoslavia for crimes against humanity. Key wartime leaders were extradited to the Hague too. Slobodan Milošević, the president of Serbia, died of a heart attack before his trial concluded, but Radovan Karadžić and Ratko Mladić, the political and military leaders of Bosnia’s Serbs, were convicted of genocide.

America in 2021 is not Serbia in 1995. Our machinery of impunity is not susceptible to pressure from larger nations. But the journalists, whistleblowers, and researchers who have done the hard work of exposing its lies — they are still at work. One thing I’ve learned over the years is that the more these people uncover, the harder they toil. I wouldn’t bet against them.