Turned Tables: In Presidential Polls, Brazil’s Lula Leads Judge Who Locked Him Up 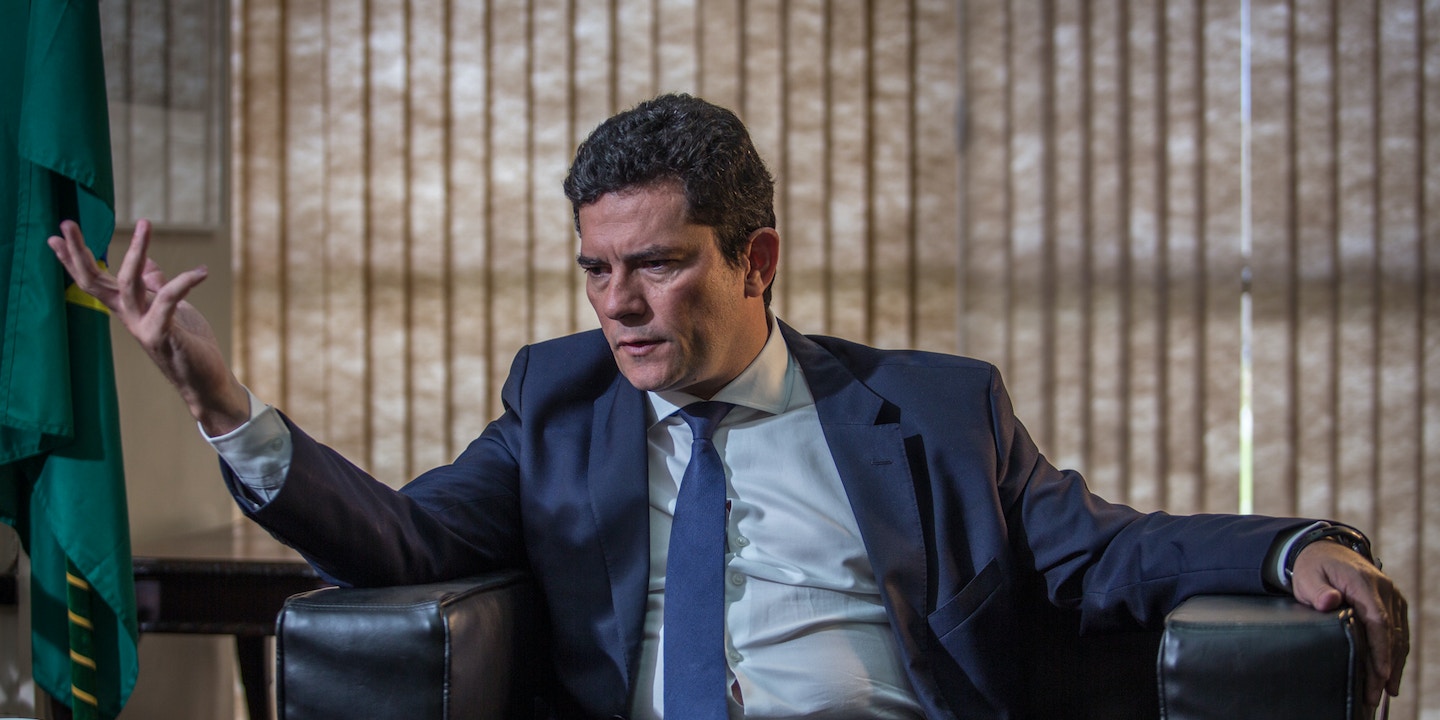 “This is not my version of the truth. This is the truth. An alternative truth doesn’t exist,” Sergio Moro declared defensively, before a mostly empty auditorium, during the launch of his new autobiography last month. For the retired federal judge, the paltry turnout would’ve been unthinkable just a few years ago. Then, Moro was riding high as arguably the country’s most influential political actor, adored by the media and millions who viewed him as Brazil’s leading crusader in the battle against corruption.

The right worshipped Moro for his role as the judge who put former President Luiz Inácio Lula da Silva behind bars on corruption charges. The popularity propelled Moro to high office, as justice  minister under far-right President Jair Bolsonaro, who won the 2018 election after the frontrunner, Lula, was made ineligible by Moro’s conviction.

For all three men, the tables have now dramatically turned. The Supreme Court freed Lula and vacated Moro’s rulings, determining that the judge acted with bias after The Intercept revealed compromising, secret chat logs showing illicit collusion between Moro and the prosecutors. Attempts to revive the cases against Lula have subsequently been thrown out, leaving Moro’s legacy damaged. It was yet another hit to Moro’s credibility, which was decimated during his brief, controversial, and at times humiliating tenure in the Bolsonaro government, culminating in an anti-climactic, acrimonious departure in 2020.

Following a high-paying consulting gig in Washington and even work on behalf of an Israeli billionaire accused of corruption and rights abuses, Moro is now running for president himself. Facing off against both his far more charismatic archnemeses, though, the former judge is struggling to break into double digits in polling.

A resurgent Lula, on the other hand, is ascendant, polling at nearly 50 percent with the lowest negative numbers of any major candidate. For his part, Bolsonaro, battered by an ailing economy and his administration’s disastrous handling of the Covid-19 pandemic, is only managing to attract just over 20 percent of voters. 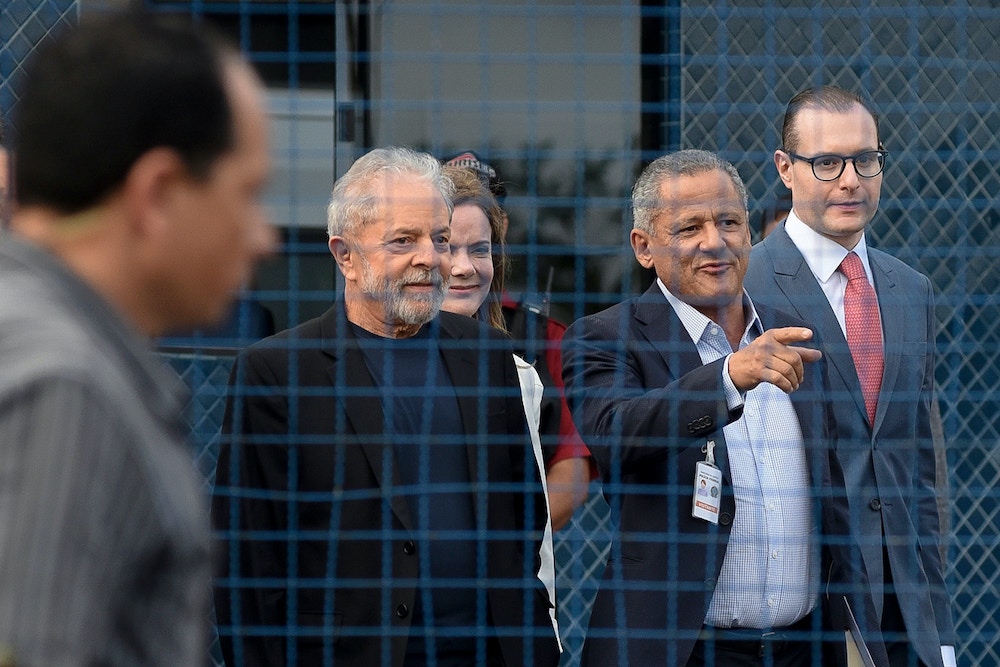 Former Brazilian President Luiz Inácio Lula da Silva, left, leaves the Federal Police Headquarters, where he was serving a sentence for corruption and money laundering, in Curitiba, Brazil, on Nov. 8, 2019.

During his book tour, the unofficial launch of his presidential campaign, Moro conspicuously dodged inconvenient questions about the mounting scandals that undercut his carefully crafted image. Interviews tend only to be granted to friendly outlets. At the book launch, Moro refused to take questions from the press and pre-signed books to avoid a fan meet-and-greet where questions could’ve been sprung on him.

The autobiography, “Against the System of Corruption,” lays out the official narrative of his professional life but brazenly elides the secret chat logs first published by The Intercept in June 2019. Moro has refused to acknowledge the archive’s authenticity, though he has claimed no wrongdoing was exposed in the chats. In his book, Moro also presents himself as an earnest political outsider who was deceived by a president that proved to be unscrupulous — a self-serving framing that ignores decades of Bolsonaro’s corruption and indecency.

The reputational damage caused by Moro’s partnership with Bolsonaro was easy to see coming: The chat records show that prosecutors from the Operation Car Wash, the very corruption investigation that Moro had overseen, clearly predicted the eventual outcome. “As Justice Minister, I think it will give rise — with reason — to arguments about the politicization of Car Wash,” one prosecutor wrote in concurrence with his colleagues. 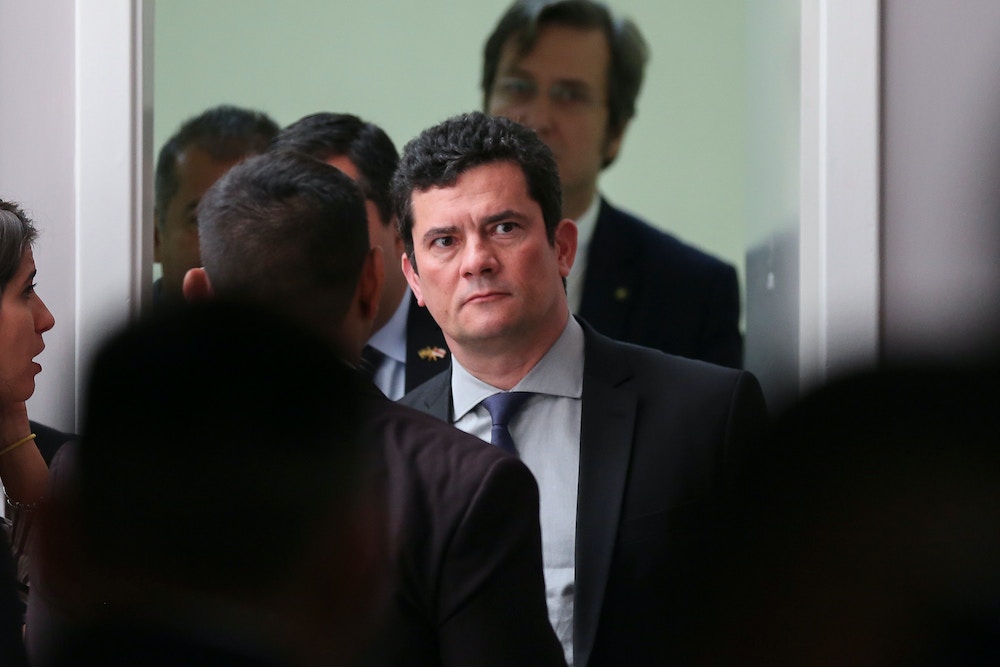 Justice Minister Sergio Moro arrives to speak to the press after the opening of the National Council of State Secretaries of Justice, Citizenship, Human Rights, and Penitentiary Administration, in Manaus, Brazil, on June 10, 2019.

From his perch in the Justice Ministry, Moro helped Bolsonaro shake off investigations into his family and worked alongside politicians accused of corruption. Moro’s positions and authority were repeatedly undermined by Bolsonaro. His first signature legislative package included a Bolsonaro-backed proposal that actually served to promote corruption by making it easier for police officers to escape punishment for crimes committed in the line of duty.

Moro himself has admitted to potential crimes under Brazilian law, including negotiating a special pension for his ministerial role. Bolsonaro accused the former justice minister of trying to negotiate a Supreme Court appointment in exchange for lending his credibility to the far-right administration.

The reputational damage caused by Moro’s partnership with Bolsonaro was easy to see coming.

This week, as part of the evidence collection in an investigation into potential wrongdoing by Operation Car Wash officials, a high court ordered the Washington-based consulting firm Moro worked for to turn over records about what the former judge did and the pay he received.

In a promotional interview last week, Moro declined an invitation to appear alongside Ciro Gomes, a center-left presidential hopeful, for a public conversation. Gomes, a former governor and federal minister, is known for an incisive debating style and an impressive ability to corner adversaries with wonky data points on a broad range of subjects. Moro, by contrast, has been criticized for his political inexperience and a lack of specifics in his platform.

“Ciro first needs to drop this offensive and aggressive posture in order for us to open up a dialogue,” Moro said. Gomes, a vocal critic of Car Wash, responded on YouTube the next day: “He doesn’t want to debate me because I’m going to say he’s corrupt.”

Recent polls show the two candidates neck and neck in the fight for a distant third-place finish — making neither likely to advance to a second-round runoff should Lula and Bolsonaro stay in the race. Supporters of former Brazilian judge and Justice Minister Sergio Moro arrive at an event where Moro announced his affiliation to the Podemos party in Brasília, Brazil, on Nov. 10, 2021.

While Brazil’s mainstream media often ignores Lula or casts him in a negative light, Moro suffers no shortage of glowing coverage — despite his lackluster polling numbers and vague policy proposals.

In November, Moro joined the relatively small, right-wing Podemos political party, the first formal requirement in a presidential bid. As journalist Fagner Torres noted, in the weeks following the affiliation ceremony, Moro was featured on the front page of the influential O Globo newspaper once every three days. Other major newspapers, radio stations, and television networks were similarly attentive. There has been little, if any, critical coverage of Moro’s scandals.

“Moro represents a part of Brazilian society, which includes a large share of the media, that does not accept Lula and is ashamed of its previous support for Bolsonaro,” said Fabio de Sa e Silva, an assistant professor of Brazilian studies at the University of Oklahoma. “His strategy will be to try to sustain the character that was created for him. I think this character is out of step with Brazil today, but it is a character that corresponds with many of the interests of some powerful groups in Brazil.”

For Moro, the media brought him to fame through his anti-corruption stances — and corruption has continued to be his focus, rather than the economic and health problems foremost on Brazilians’ minds. It has so far worked in the press, including the international business press, if not quite the polls: Moro is hailed as a “third way” candidate: a nonpartisan, unifying alternative to the left-right “polarization” between Lula and Bolsonaro.

Moro is using this media narrative to try to capture the same winning coalition Bolsonaro built in 2018, when the far-right candidate enjoyed positive media coverage. Moro’s critics, though, said his try for the same coalition reveals a campaign that essentially puts a more polite patina on the same sort of far-right politics leveraged by the brash Bolsonaro.

Sa e Silva pointed to right-wing military figures who had served in the Bolsonaro government but became disenchanted and now embrace Moro’s candidacy. “It is further evidence that Moro, if he truly represents an alternative path,” Sa e Silva said, “is an alternative path to Bolsonarismo and not away from so-called polarization.” In contrast to Moro, Lula has been charting a course of conciliation for 2022 — much as he did during his first presidential victory in 2002. Although he has not officially confirmed he is running for president, he is far along in the process of courting Geraldo Alckmin of the center-right Brazilian Social Democracy Party, to be his vice president. The alliance with a former rival is designed to soften opposition to Lula’s candidacy from the nation’s business elite and indicate a desire to build a broad coalition.

In stark contrast to Bolsonaro’s growing global isolation, Lula has been traveling the world, being fêted by world leaders. Yet Brazilian mainstream media outlets were slow to cover the warm receptions Lula received on his trips.

Instead, the Brazilian press has taken a hostile posture toward Lula. When the former president did an interview with the Spanish newspaper El País that won positive headlines in Europe, Brazilian corporate media focused on an incomplete clip from his interview about the recent election in Nicaragua to accuse Lula of being an enemy of democracy — even comparing him to Bolsonaro.

“The media was very hostile to Lula during Operation Car Wash and has not been friendly so far this election cycle,” said Marcelo Semer, a state appeals court judge and author. “The Bolsonaro administration has been a complete tragedy, but the media still clearly prefers Moro — the candidate who is most ideologically aligned with Bolsonaro — to win next year. It is normalizing Moro’s candidacy and protecting him just like Bolsonaro was protected in 2018.”