The Silence — or Worse — of Human Rights Hawks on U.S. Sanctions Against Afghanistan

When opposing the withdrawal from Afghanistan, D.C. hawks crowed about human rights. With U.S. sanctions causing starvation? Not so much. 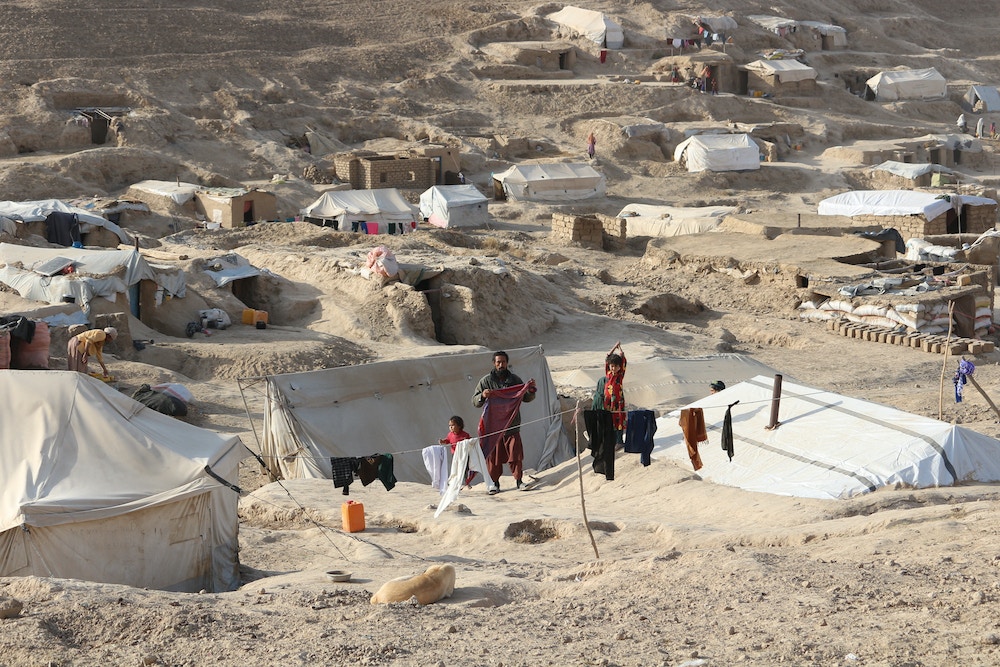 A general view of a camp where some families make a living from begging, and others consider selling their children due to poverty in Qala-E-Naw, Afghanistan, on Oct. 28, 2021.

Months after the U.S.-backed Afghan government fell to the Taliban, ordinary Afghans now face what could be their direst winter in decades. Thanks to the economic collapse that accompanied the U.S. military withdrawal, coupled with the imposition of sanctions and the cessation of much humanitarian aid, millions of Afghans must contend with the very real prospect of starvation. Some will die. Many will lose their lives to preventable deaths.

While limited humanitarian exceptions for trade have been carved out in recent weeks, the World Health Organization has already warned that up to 1 million Afghan children may die as a result of malnutrition over this winter if drastic steps are not taken. Children are already bearing the brunt of the humanitarian catastrophe, punctuated by horrifying stories of kids being sold to pay for food. And the country’s notoriously harsh winter is already taking a toll: Afghans are freezing to death as they flee the country with their families.

U.S. sanctions policy is directly to blame, pushing Afghans over the edge as they already struggle to deal with the Covid-19 pandemic and the political upheaval created by the collapse of the central government. As Paul Spiegel, director of the Center for Humanitarian Health at Johns Hopkins Bloomberg School of Public Health, wrote this December, after returning from a trip to Afghanistan on behalf of the WHO, “I can clearly state that if the United States and other Western governments do not change their Afghanistan sanction policies, more Afghans will die from sanctions than at the hands of the Taliban.”

The deaths will be brought about as a result of deliberate policy decisions made in the U.S. Alongside new sanctions imposed after the Taliban takeover, the U.S. froze nearly $10 billion of Afghanistan’s central bank holdings here. The Biden administration refuses to release the funds despite ongoing public protests by Afghans.

As all of this plays out, the clamor of voices criticizing the U.S. military withdrawal this summer on humanitarian grounds has gone deadly silent. After the withdrawal, many commentators and political leaders claimed that there was a humanitarian imperative behind the conflict, particularly the protection of Afghan women. Many of the humanitarian and feminist arguments had been used for years to help justify a military occupation that was often despised by the same people it was ostensibly defending. In contrast, ending the current sanctions regime and releasing funds owned by Afghans actually would do something unambiguously positive for civilians there, including women and children who are particularly at risk.

The cognitive dissonance on display is perhaps best underlined by Rep. Michael McCaul of Texas, the ranking Republican on the House Foreign Affairs Committee. This summer, McCaul decried the fate of Afghan women. “We’re seeing this nightmare unfold — unmitigated disaster of epic proportions,” he said in an interview. “And what I really worried about the most are the women left behind and what’s going to happen to them.” When the Biden administration then put sanctions exemptions in place to allow some humanitarian aid, McCaul then turned around to condemn the limited relief — even as news reports described the economic collapse wreaking havoc on the lives of Afghans, including women and children.

With this new nightmare unfolding, the concern shown in August has largely faded. 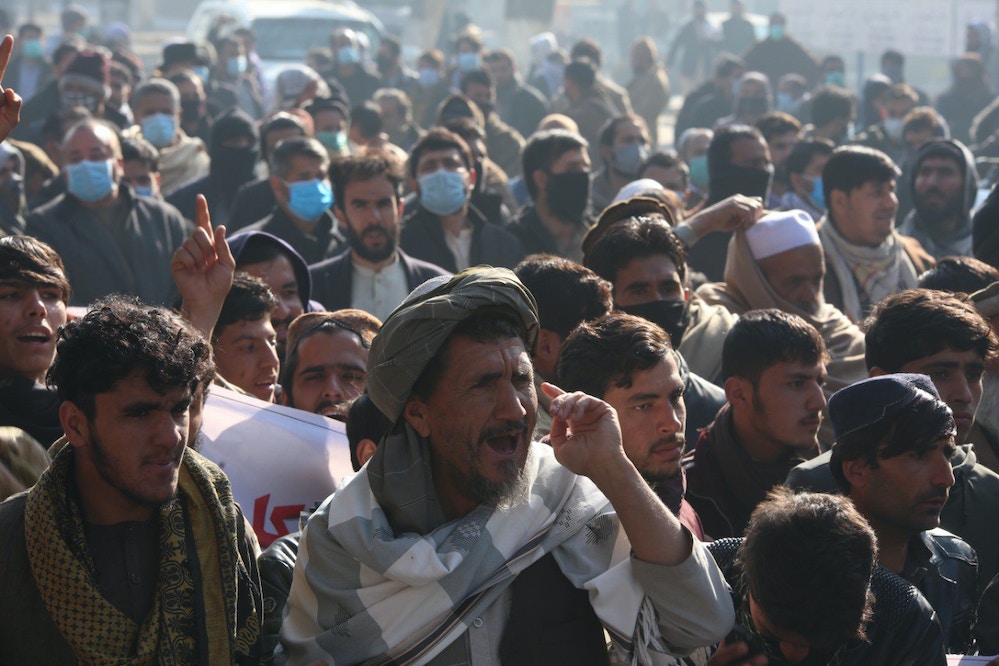 Afghans holding banners take part in a protest and march towards the former U.S. embassy building demanding the release of Afghanistan’s frozen assets and resuming international funds amid worsening economic conditions and rising poverty in Kabul, Afghanistan, on Dec. 21, 2021.

Many Failures of Sanctions

Sanctions are one of the bluntest coercive tools in the U.S. foreign policy toolkit — and happen be a favorite of policymakers, even as they rarely produce political results. Afghanistan is just one example of a mindlessly cruel sanctions regime that wreaks havoc on entire civilian populations without accountability. For decades, Iranians have been subjected to some of the most crushing sanctions on earth. Obstacles are erected against even the most anodyne business ventures. Young people there are unable to envision a fruitful life in the country. The sanctions on Iran were intensified under the Trump administration but have continued under President Joe Biden, as part of a desperate effort to force a total capitulation over Iran’s nuclear program.

Even Cold War-era sanctions on countries like Cuba continue to remain in effect to this day, absent any compelling geopolitical reasons. In a recent example that underlined the parodic nature of the Cuba sanctions policy, the rental company Airbnb was hit with a fine for doing business on the island and allowing Cubans access to its accommodation services. This was just the latest limitation on ordinary Cubans’ ability to conduct basic economic transactions or engage in trade with companies headquartered abroad and thus at risk of U.S. sanctions. Despite being in place for years and making life hard for Cubans, the sanctions have done little to further U.S. foreign policy objectives.

“The sanctions on Cuba have been completely ineffective in achieving their policy goals,” said William LeoGrande, a government professor at American University and an expert on the Cuban sanctions regime. “They haven’t brought about regime change. All they’ve done really is inflict pain on the Cuban people.”

The situation in Afghanistan may yet stand out as one of the deadliest instances of violence against civilians inflicted by U.S. sanctions. The Afghan government that was built over two decades of American occupation was created to be wholly dependent on foreign support, particularly its health care system. With the abrupt withdrawal of aid and the imposition of sanctions, millions of Afghans, including women and children, are now at risk.

More stories of starvation, death from the cold, and families broken apart by economic need are likely to result from the present approach of preventing access to funds owned by the Afghan government and denying aid. And it seems unlikely that such measures will do what 20 years of war could not: build a stable government that keeps the Taliban out of power.

It seems unlikely that sanctions will do what 20 years of war could not: build a stable government that keeps the Taliban out of power.

Though sanctions on Afghanistan won’t achieve U.S. political aims, they are, as in so many other countries, succeeding in visiting cruel consequences upon the most vulnerable. House Democrats have called on Biden to release funds owned by Afghanistan’s central bank, but the administration has so far been resistant to this step. One reason could be that reversing course would reveal the brutality of the underlying policy — employing sanctions to deny foreign nations’ central banks access to their funds — which the U.S. government continues to do in other cases. Meanwhile, the broader sanctions regime on Afghanistan remains in place, with ordinary Afghans bearing the brunt.

“To help Afghanistan make progress on the humanitarian front, it is simply not enough to just give aid to Afghanistan. Washington’s financial warfare against the country must end,” wrote Giorgio Cafiero, CEO of Gulf State Analytics and an adjunct fellow at the American Security Project. “Those in the West who voiced so much concern about the lack of freedom for Afghan women under the Taliban ought to also care about their survival this winter.”