As the left resumes power with President Xiomara Castro’s inauguration, the official seeks shelter in the United States. 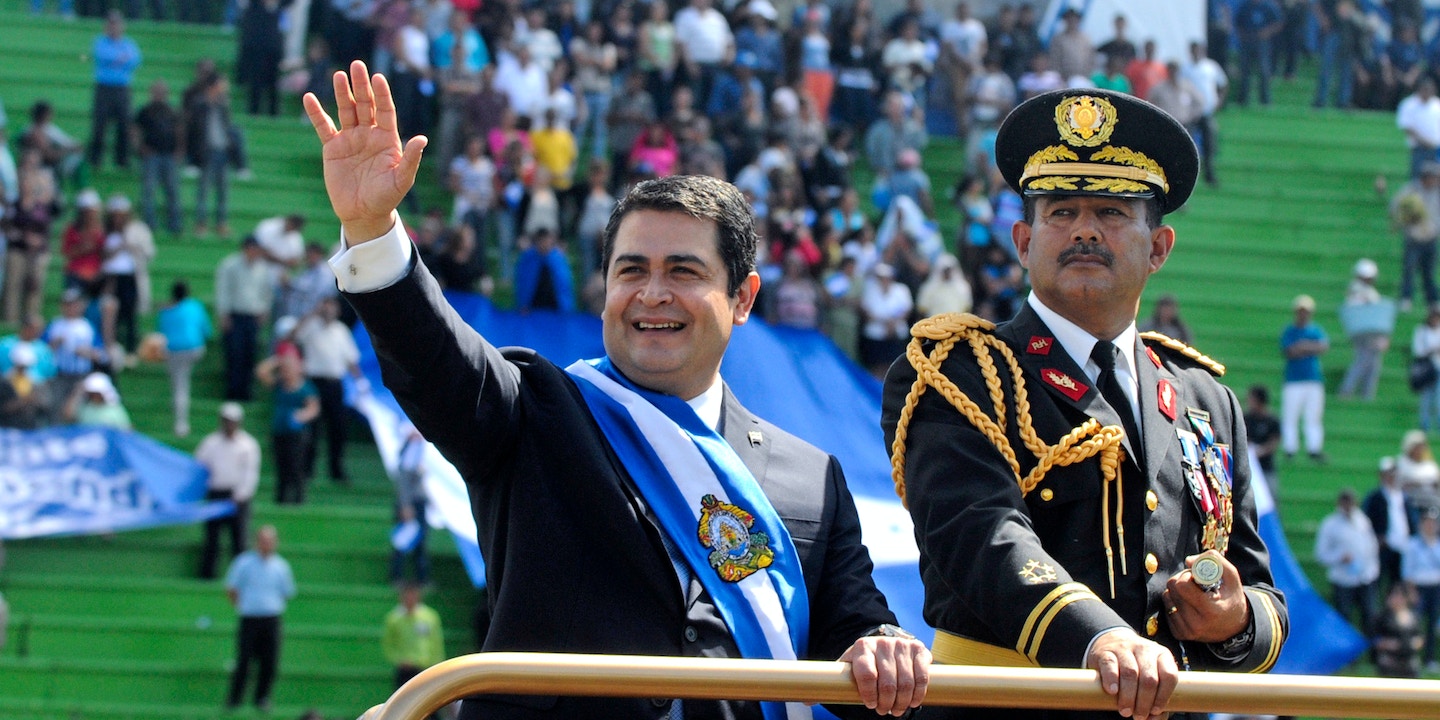 Honduras’s defense minister quietly requested asylum from the U.S. government after the country elected a new leader in November, The Intercept has learned.

The defense minister, Gen. Fredy Díaz, said that he fears being charged with corruption by the newly elected democratic socialist President Xiomara Castro, especially considering the role the Honduran military played in the coup that ousted her husband, former Honduran President Manuel Zelaya, according to a source whose knowledge of the matter was verified by The Intercept. In light of Zelaya’s expulsion from the presidency — and the country — by the Honduran army in 2009, Castro’s landslide victory on November 28 of last year stunned many in the international community. During her campaign, Castro vowed to “pull Honduras out of the abyss we have been buried in by neoliberalism,” reflecting the stance taken by Zelaya, who was critical of the U.S. role in the region.

Díaz joined the administration of Juan Orlando Hernández, the two-term Honduran president who took office in 2013 and whom the U.S. Justice Department accused last year of drug trafficking and bribery. During his narrow reelection in 2017, protesters took to the streets to oppose Hernández and were met with violent force by the Honduran military police, which killed at least 21 demonstrators and earned the condemnation of the Office of the United Nations High Commissioner for Human Rights. The election was clouded by allegations of fraud from the Organization of American States, which called for a do-over, but U.S. President Donald Trump quickly recognized the results, and Hernández served as president until Castro’s inauguration on January 27.

Now the Biden administration is faced with the decision of whether to grant Díaz asylum before possible corruption charges, given that in his role as defense minister, he was at the helm of the Honduran military. The question will serve as a test of how serious the current U.S. government is about respecting the autonomy of governments in the region. A senior Democratic congressional aide, who was not authorized to speak publicly, told The Intercept: “If the Biden administration wants to make good on its commitment to democracy and human rights, this should be an easy call.”

The U.S. State Department referred questions to the Department of Homeland Security, which declined to comment. “Asylum applications are confidential under immigration law,” a Homeland Security spokesperson told The Intercept. The Honduran Embassy did not respond to multiple requests for comment.

In November’s high-turnout election, Castro defeated Nasry Asfura, the mayor of Tegucigalpa and a member of Hernández’s National Party, by a wide margin, becoming Honduras’s first female president. Since her inauguration last week, she has vowed to “uproot the corruption of the last 12 years of dictatorships,” making clear her view of the illegitimacy of the post-coup governments. Castro received a high-profile inauguration day visit from U.S. Vice President Kamala Harris, whose office said it “welcomed President Castro’s focus on countering corruption and impunity.” The new administration faces no shortage of challenges, however, with the Honduran government presently mired in disagreement over whether a member of Castro’s party will run the Congress.

Castro’s husband, Zelaya, was born into an elite family in Honduras and gained political power as a pro-business centrist, but he embraced left-wing positions as president: His signature reforms included boosting the minimum wage by 60 percent, raising teacher salaries, and making school enrollment free. Under his leadership, Honduras in 2008 joined the Bolivarian Alliance for the Peoples of Our America, or ALBA, a trade organization established by former Venezuelan President Hugo Chávez as a rival to the U.S.-sought Free Trade Area of the Americas, an attempt to extend NAFTA while excluding Cuba. (Honduras has since left ALBA, whose 10 member states include Venezuela, Cuba, and Nicaragua.)

Though his administration succeeded in decreasing poverty, his policies enraged Honduran business elites, culminating in a military coup in June 2009. While the Obama administration publicly condemned the coup as illegal, behind the scenes, then-Secretary of State Hillary Clinton soon sought back channel methods of communication with interim President Roberto Micheletti. Of her longtime contact Lanny Davis, then a consultant to a group of Honduran businesspeople, Clinton asked in an email: “Can he help me talk w Micheletti?”

Though the U.S. government’s official stance is that it had no involvement in the coup, subsequent reporting casts doubt on the claim. On the day of the coup, American military officers were at a party at the U.S. defense attaché’s house, along with their Honduran military counterparts, The Intercept reported in 2017. And many U.S. officials present in Honduras at the time had wanted Zelaya removed, said a retired senior Drug Enforcement Administration official who was stationed in Honduras during the coup, speaking anonymously to avoid retaliation. Martin Edwin Andersen, a former professor at the National Defense University and U.S. Naval Academy and an adviser to both the Senate and Justice Department on national security matters, called the claims plausible, noting that U.S. military officials “had myriad back channels to the coup plotters, some institutional and some personal.” Andersen added, “They were knee-jerk ‘anti-communists’ who were Army veterans tied to the School of the Americas.”

Since the coup, the Honduran government has been in the hands of the right. During his two terms, Hernández, a member of the right-wing National Party, hewed to a pro-business, pro-military agenda. In 2018, the administration touched off protests following an attempt to privatize health care and education.

U.S. military officials “had myriad back channels to the coup plotters, some institutional and some personal.”

Hernández’s brother, Juan Antonio “Tony” Hernández, a former Honduran congressional representative, played a clandestine role in the administration, allegedly funneling millions of dollars in drug profits to both the presidential campaign and the party, on whose behalf he also accepted a million-dollar bribe from Sinaloa cartel chief Joaquín “El Chapo” Guzmán. Tony Hernández was sentenced to life in prison for having trafficked at least 150 kilograms of cocaine into the U.S. — enough, as the New Yorker’s Jon Lee Anderson notes, to provide five doses to every U.S. resident — in what prosecutors called “state-sponsored drug trafficking.” After the sentencing, which directly implicated Juan Orlando Hernández, Trump still praised the then-president for his help “stopping drugs at a level that has never happened,” even emphasizing that he was “working with the United States very closely.” (Former President Hernández has repeatedly denied links to drug traffickers.)

Another former senior DEA official knowledgeable about Honduras who requested anonymity for fear of reprisal, while no fan of Zelaya, expressed contempt for Hernández, who he expects will be indicted for his alleged role in narcotics trafficking — a widely held belief.

As Honduras devolved into a virtual narco-state, the homicide rate soared. Its toll includes the ongoing repression of environmental and Indigenous rights activists who interfere with the development aims of the business elite, with hundreds of murders making Honduras one of the most dangerous countries on the planet to defend natural resources and land rights. Poverty skyrocketed along with the homicide rate, driving a migration crisis that U.S. Republicans would later use as campaign fodder. So-called migrant caravans — made up largely of fleeing Hondurans — became a central campaign theme that Trump exploited during the 2018 midterm elections. In Hernández, Trump had a loyal ally: The Honduran president was willing to have migrants who had arrived at the U.S.’s southern border transferred back to his country.

The Biden administration’s diplomatic overtures to the Castro administration appear to be rooted in an awareness of the role that political instability might play in undocumented immigration. In February of last year, President Joe Biden signed an executive order calling for the development of a strategy to address the root causes of migration to the U.S. from Central American countries, including Honduras. Harris has led a diplomatic effort to help shore up governments in the region so that people don’t need to flee to the U.S., pledging in a December 10 phone call with Castro to deepen the partnership with Honduras and work to address the root causes of migration. According to Anderson in the New Yorker, when briefed with evidence of the former Honduran president’s role in drug trafficking, Harris suggested, “Let’s go get him now.”

Even so, the U.S. and Honduran militaries maintain close relations. In February 2020, U.S. Adm. Craig Faller presented Díaz with a Legion of Merit award during a visit to U.S. Southern Command in Miami, according to a press release. In December, Southern Command’s new leader, Gen. Laura Richardson, reportedly said that while relations between U.S. and Latin American governments are not “what we would want … the military relationships are really strong.”