Can the Left Learn From Canada’s “Freedom Convoy”?

The left should seek to employ the disruptive power on display in Canadian protests — but only on its own anti-racist, antifascist terms. 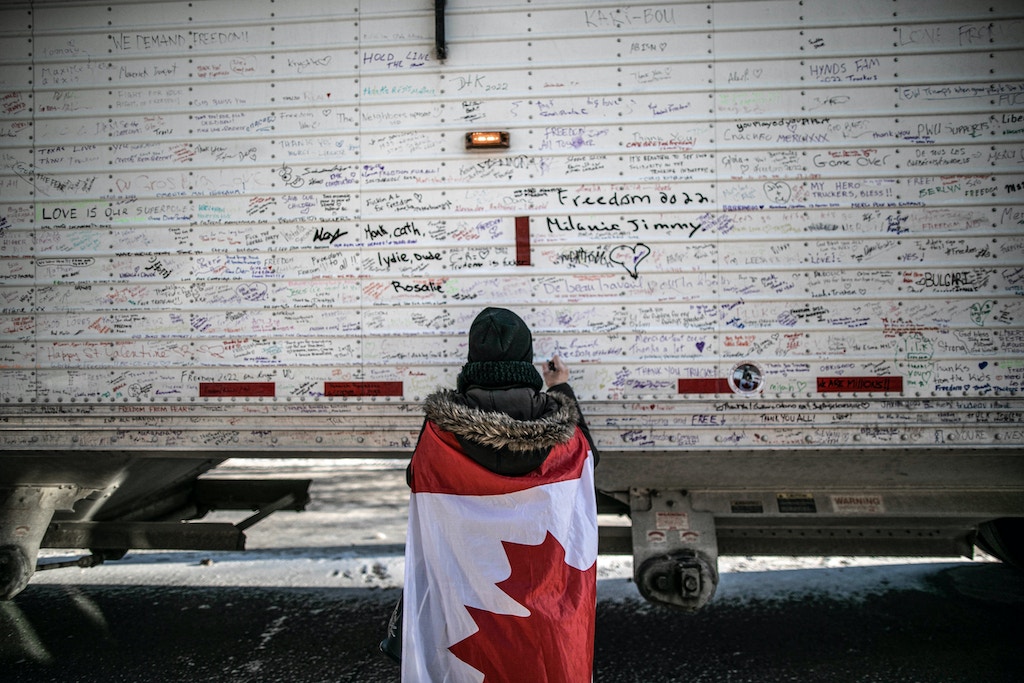 A woman writes a message of support on a truck as protests against coronavirus vaccine mandates continue in Ottawa, Canada, on Feb. 13, 2022.

For over two weeks now, protests against Covid-19 public health mandates have occupied Ottawa, Canada’s capital, under the banner of the “Freedom Convoy.” Would that an anti-authoritarian liberation struggle worthy of the name could have such staying power; if only those in the fight against racial capitalism could take a city and hold it, putting state power on the back foot.

The right, of course, doesn’t have some of the baked-in obstacles that the left faces — above all, the police, whose light touch so far has been key to the right-wing-led protesters’ ability to set up camp in front of the Canadian Parliament. Videos even show some cops offering words of support to the protesters. On more than one occasion, cops have cleared counterprotesters out of the way of truck convoys joining the blockade.

In contrast, Indigenous land defenders of the Wet’suwet’en First Nation have been met in recent years with consistent police violence when they have attempted to use blockades to stop pipeline construction. Which is not to say that the left wants the police on their side: Left-wing, Black, and Indigenous-led liberation movements cannot, and would not, seek the understanding of the police forces that oppress them.

There are other lessons, however, for the left to take away from the occupations and blockades in Ottawa — lessons that in no way entail supporting state power or embracing the protesters as potential working-class, anti-authoritarian allies. Instead, the left should seek to employ the same disruptive power on display in these protests, but only on its own terms. A protester shows a police service statement issued as truckers continue their protest against public health mandates in Ottawa, Canada, on Feb. 16, 2022.

The relative leniency with which police have met the convoy protesters could be coming to an end. Ottawa’s police chief was ousted this week amid criticism of his inaction against the convoy. And on Monday, Canadian Prime Minister Justin Trudeau declared a national public order emergency — the first time a Canadian government has taken such action in half a century — to clear the occupation and allied blockades along the Canadian border. The emergency order gives the federal government extraordinary powers, including overriding rights to public assembly and permits blocking anyone believed to be taking part in the protest from using financial institutions.

There is nothing for the left to support in the invocation of these repressive powers. Those same measures will be used to quash the movements we support. Poor, marginalized, and racialized communities are already summarily arrested, deported, surveilled, and excluded from the economy.

And the Canadian state is not showing a unique willingness to repress right-wing movements; rather, we are seeing Trudeau’s government forced into a corner, having ceded ground to these protesters that no left-wing, anti-racist protesters would be permitted.

We need not join liberal calls for police and state intervention in order to oppose the occupation and the copycat convoys it inspires. Instead, we can support the counterprotesters pushing back against the convoys as an antifascist response to the presence of far-right forces in their midst.

Likewise, we might find sympathy for the Ottawan locals who understandably want a return to peace in their normally quiet city, rattled nightly by the occupation’s honking trucks and late-night music. Yet the problem with the occupation is not that it is disruptive — blocking key points of capital’s circulation is a strategy to be embraced.

The same tactical logic informed the Arab Spring, the European Square movements in 2010, and the Occupy encampments the following year; taking over tracts of city space is hardly an invention of the trucker convoy. The truckers’ ability to hold a city center for weeks in a powerful nation like Canada is nonetheless worthy of note.

These dynamics together sum up how the danger, as ever, lies not in drawing lessons from the right-wing protests but in drawing the wrong ones. Demonstrators outside the Parliament dance with placards during a protest against Covid-19 vaccine mandates and the Trudeau government in Ottawa, Canada, on Feb. 13, 2022.

It is true that the Canadian protesters are not uniformly white nor all committed to a Trumpian white nationalism; there are participants who have seen an opportunity, albeit catalyzed by a pathetic anti-mandate movement, to protest Trudeau’s government and its neoliberal policies.

One could squint and see the potential for anti-authoritarian affinities to be found. Squint that hard, though, and you might find your eyes are closed. We cannot ignore the white supremacist notion of autonomy that undergirds the movement, which is not an incidental aspect that could be exorcised to reveal a working-class movement based on solidarity.

Needless to say, there’s nothing salutary in the individualist rejection of masks and vaccines. The historian Taylor Dysart in the Washington Post rightly characterized these truckers’ notion of “freedom” — the ability to move freely and potentially spread disease across the occupied Indigenous lands of the U.S. and Canada — as the “freedom” of settler colonialists.

The settler colonialism was evident in the occupiers’ offensive misuse of Indigenous ceremony — which Indigenous groups have condemned — and the way the convoy protesters ignore Native communities’ calls for the end of this occupation on already occupied land.

The “Freedom Convoy” is also not a challenge to the U.S. and Canada’s violent border regimes, even though it began in protest of the border policy mandating that truck drivers be vaccinated to cross between the U.S. and Canada. A number of the movement’s leaders have openly expressed racist, anti-immigrant sentiments and been involved in far-right organizing.

The anti-mandate protesters are not in the struggle for the freedom of anyone’s movement but their own. Tear gas surrounds protesters as they clash with police during a Yellow Vest demonstration near the Arc de Triomphe in Paris on Dec. 1, 2018.

A useful comparison might be drawn with the Yellow Vest movement, which exploded onto the streets of France in late 2018. The protests were initially in response to the ur-neoliberal French President Emmanuel Macron’s increase on fuel taxes — a putatively ecological measure that in fact put an extraordinary financial burden on the working class while refusing to challenge major corporations. The protests erupted into a generalized uprising against the French status quo of austerity and economic injustice.

Under the Yellow Vest umbrella, fascist elements were also pushing for harsh immigration policies, while antifascist leftists were taking to the streets against the police and capitalist institutions. The movement contained deep internal conflicts, and left-wing participants were faced with the question of whether it was worth trying to fight the racist and fascist elements of the uprisings from within the movement. Many, though, deemed the alternative — to allow far-right forces to direct and control the revolutionary moment — unacceptable.

Could the same logic also speak to the anti-state protests in Canada and beyond today? Should the left refuse to cede the ground of anti-state dissent and circulation struggles to the right-wing conspiracy theorists?

Any worthwhile response to the “Freedom Convoy” occupations and blockades must take effect on wholly anti-racist, antifascist, and anti-capitalist terms.

The difference between the current blockades and the Yellow Vests is that the “Freedom Convoys” are not only incidentally rich in far-right elements; the notion of autonomy driving the movement is essentially a white supremacist, individualist one. Notably, too, American right-wing support of the blockades is only anti-state insofar as the state is not a Trumpian one. And it’s worth recalling that when Canada saw its own Yellow Vest movement emerge in response to France’s, it was explicitly right-wing and anti-immigrant in character; the current blockades are within this legacy.

If there is a Yellow Vests-related legacy to carry forward toward more liberatory aims than those of the Ottawa occupations, we might instead recall the Black Vests, or “Gilets Noirs” in French. This huge collective of undocumented immigrants in France carried out major protest actions in 2019, including occupying a terminal in Paris’s Charles De Gaulle Airport in direct resistance to Air France’s role as “the official deporter of the French state.” The movement understood, too, the importance of striking at major points of circulation: sites of the free flow of capital and brutal limits on the movement of peoples.

Like the Black Vests’ answer to the Yellow Vests, any worthwhile response to the “Freedom Convoy” occupations and blockades must take effect on wholly anti-racist, antifascist, and anti-capitalist terms. On this side of the Atlantic, the way has already been paved — and not by anti-mandate protesters. Indigenous land and water defenders from Standing Rock to the Wet’suwet’en territories have shown us what it looks like to take up the struggle against capitalist circulation in the service of collective, rather than individual, freedom.