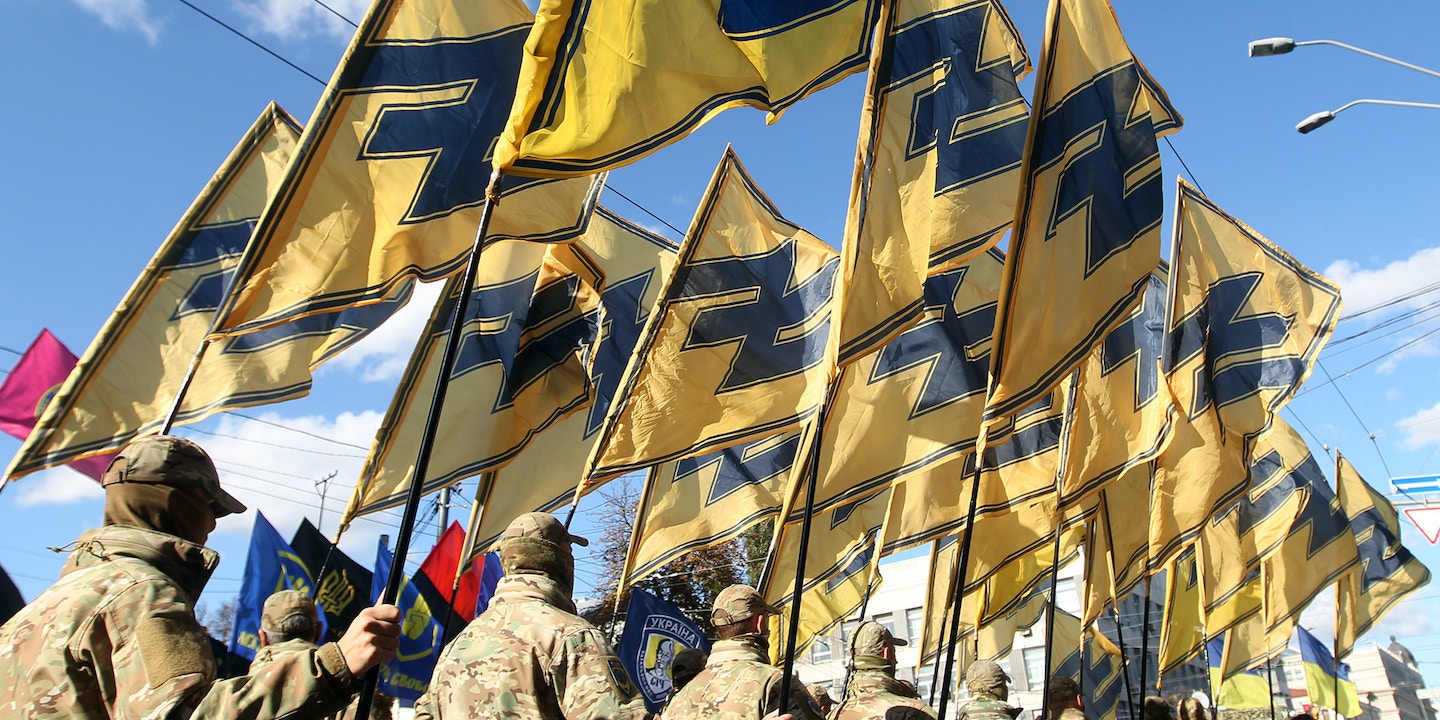 While Senate Democrats consider a way forward to send Ukraine hundreds of millions of dollars so it can buy new weapons, some of the most influential advocates are neglecting measures to make sure they don’t wind up with the country’s notorious neo-Nazis.

Last month, Sen. Bob Menendez, D-N.J., introduced legislation to give Ukraine $500 million for arms purchases and impose what he’s called the “mother of all sanctions” on Russia if it invades. The bill mandates a number of reports on U.S. defense equipment transfers and Russian intelligence threats as well as the expansion of American news propaganda. But it makes no mention of reports to oversee whether U.S weapons go to white supremacists like the Azov Battalion, a unit in the Ukrainian National Guard with ties to the country’s far-right, ultranationalist National Corps party and Azov movement. Last year, Rep. Elissa Slotkin, D-Mich., called on Secretary of State Antony Blinken to label the Azov Battalion a foreign terrorist organization, saying it “uses the internet to recruit new members and then radicalizes them to use violence to pursue its white identity political agenda.”

The issue was not on Menendez’s radar Wednesday. “That’s a level of detail I’m not sure [about],” he told The Intercept when asked if his bill includes monitoring provisions. By Friday morning, bipartisan talks for a joint sanctions and weapons bill had broken down, frustrating members of Congress who seek to assert themselves into the foreign policymaking process narrowing the White House’s diplomatic tool set if Russia invades. Menendez, whose bill remains on the table, told reporters Wednesday that his door is still open to Republicans to come up with legislation together. Meanwhile, Ukraine has already received tons of ammunition and weapons from the U.S.

Menendez is the Democrats’ most powerful foreign policymaker in the Senate, and his stance appears to reflect the dominant mood in Washington. Russia issued a statement Thursday saying that the U.S. has not provided security guarantees in response to a draft treaty, and the U.S. alleged that Russia lied about withdrawing troops from the Ukrainian border. Menendez’s pursuit of mandatory sanctions on Russia and weapons funding for Ukraine is in line with the foreign policy establishment’s hawkish posture.

And Menendez isn’t the only member of Congress who appears unconcerned that U.S.-funded weapons could fall into the wrong hands. “I’m not considering any of that right now,” said Sen. Jeanne Shaheen, D-N.H., who chairs the Senate Foreign Relations subcommittee on Europe and regional security cooperation.

Connecticut Democratic Sen. Richard Blumenthal, a member of the Senate Armed Services Committee and the Commission on Security and Cooperation in Europe, told The Intercept that the U.S. “should certainly monitor and scrutinize the way those arms or weapons are used.” However, “our main goal is to aid the Ukrainians in their defense.”

Past reporting shows that the U.S. doesn’t have sufficient procedures in place to track where its arms are going and prevent them from ending up with extremists. What’s known as the “Leahy vetting” process is supposed to certify whether foreign forces have committed “gross human rights violations” before greenlighting U.S. government support. But that proved ineffective in making sure that neo-Nazis in the Azov Battalion weren’t receiving U.S. training, the Daily Beast reported in 2015.

Congress has also passed measures, signed into law repeatedly since 2018, forbidding funds from going to arms and training for the Azov Battalion. Last year, the House of Representatives passed a defense bill that included an amendment sponsored by Rep. Rashida Tlaib, D-Mich., to vet forces receiving U.S. military assistance for violent ideologies, “including those that are white identity terrorist, anti-semitic, or islamophobic.” But when the bill reached the Senate, Tlaib’s amendment was stripped from the final version during negotiations. Meanwhile, Ukrainian-American researcher Oleksiy Kuzmenko reported in September that officers belonging to an informal right-wing group called Military Order Centuria, which has ties to the international Azov movement, have trained at a Western-backed military institution.

Menendez and Shaheen appeared unaware of past failures to enforce the law against funding the Azov Battalion.

Shaheen, for her part, said that she’s not considering provisions to keep an eye on arms because “the administration has already approved weapons to Ukraine.”

Meanwhile, as Senate Democrats and Republicans debate a strategy toward Eastern Europe moving forward, Ukraine has already received from Lithuania Stinger anti-aircraft missiles, the small, lightweight weapons that the U.S. famously armed the mujahideen with during the 1980s war in Afghanistan against the Soviet Union.