At a U.N. Security Council meeting, a speech by Kenyan Ambassador Martin Kimani struck at the heart of the crisis set off by Russia’s aggression. An armed guard stands before a fence at the Ukraine-Russia border in the Kharkiv region in northeastern Ukraine on Feb. 16, 2022.

As Europe faces the grim prospect of a land war on a scale it has not seen since World War II, it was Kenya’s ambassador to the United Nations, Martin Kimani, who delivered a message that struck at the heart of the crisis: a lingering nostalgia for empire.

At an emergency meeting of the U.N. Security Council, called to discuss the Russian aggression against Ukraine, Kimani did not just condemn the threat to Ukrainian sovereignty by President Vladimir Putin’s government. He went further, highlighting how an unceasing obsession over territory and borders is continuing to drive violence around the world, long after the European empires that drew those demarcations have vanished from the map. He offered an alternate vision of peace through acceptance of the borders created by the collapse of empires and nations in the 20th century, calling for economic and cultural integration instead.

“Kenya, and almost every African country, was birthed by the ending of empire,” Kimani said. “Our borders were not of our own drawing. They were drawn in the distant colonial metropoles of London, Paris, and Lisbon with no regard for the ancient nations that they cleaved apart. Today, across the border of every single African country live our countrymen with whom we share deep historical, cultural, and linguistic bonds. At independence, had we chosen to pursue states on the basis of ethnic, racial, or religious homogeneity, we would still be waging bloody wars these many decades later. Instead, we agreed that we would settle for the borders we inherited.” 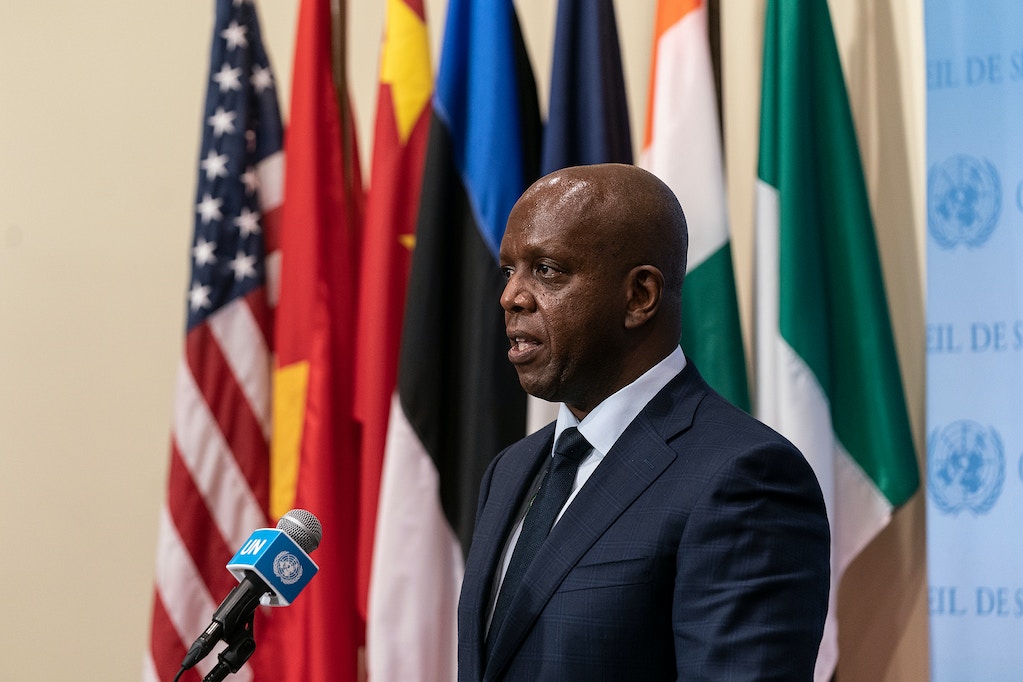 Kimani’s remarks, which went viral on social media and in the African media, also criticized what he called the “dangerous nostalgia” for empire that leads countries to redraw borders by force to reunite with citizens of other nations with whom they share cultural affinity — the exact argument the Russian government has used to justify its invasion of Ukraine in support of Russian speakers there. Instead, Kimani called on Europe to follow the rules of the U.N. charter as the African Union countries have sought to do, respecting the sovereignty of neighboring countries “not because our borders satisfied us, but because we wanted something greater forged in peace.”

Kimani’s speech seemed perfectly calibrated to respond to Putin’s remarks in recent days. In public statements, Putin has denigrated the very existence of Ukraine as a nation by describing it as little more than an imperial vassal that had been severed by modern politics from its rightful place under Russian control. Despite having a long independent history as well as a distinct language and culture, Ukraine has been governed in part by competing empires over the centuries, including most recently by Tsarist Russia and the Soviet Union. The country gained its full independence in 1991 after the breakup of the Soviet Union, an event Putin has described as “the greatest geopolitical tragedy of the 20th century.” In a televised address on Monday in which he recognized the independence of two breakaway regions of Ukraine, Putin called Ukraine “historically Russian land” in the course of an extended pseudo-history lesson given to justify his deployment of Russian troops.

Putin is not alone in harboring dreams of lost empire or in trying to rebuild them by redrawing new borders in the present day. Much violence around the world seems to stem from similar sentiments held in other countries: The aggressive foreign policies of China, Turkey, Iran, and Serbia, as well as other modern states built from the ruins of past empires, appear to be similarly fixated on restoring historic territories to which they feel they have been deprived in the present day. Though less explicitly irredentist at the moment, some Western European countries also seem to feel a sense of ownership over territories they formerly controlled, most notably France in the Sahel region of Africa and in Lebanon.

Despite the announcement of an initial round of sanctions on Russia from European Union countries, Putin still looks ready to “restore” Russian control over parts of Ukraine beyond the breakaway regions of Donetsk and Luhansk. Reports of troop buildups near Ukraine’s borders have continued over the past several days, while NATO leaders have said that they are still bracing for what could be a full-scale invasion of Ukrainian territory. Some estimates have said that such a war could kill tens of thousands of Ukrainian citizens and trigger a refugee crisis across Europe.

The United States has criticized Russia for violating another nation’s sovereignty. But given its own track record of invasions, assassinations, and torture of foreign citizens, it may not be the best messenger. Instead, at what’s certainly a dire moment for Europe, it is the words of the Kenyan ambassador that best embody the high principles of liberal internationalism and multilateral cooperation that now seem mortally endangered.

“We believe that all states formed from empires that have collapsed or retreated have many peoples in them yearning for integration with peoples in neighboring states. This is normal and understandable. After all, who does not want to be joined to their brethren and to make common purpose with them? However, Kenya rejects such a yearning from being pursued by force,” Kimani said. “We must complete our recovery from the embers of dead empires in a way that does not plunge us back into new forms of domination and oppression.”

Calling for a peaceful resolution to the crisis and affirming the rights of Ukrainians, he added: “Multilateralism lies on its deathbed tonight. It has been assaulted as it has been by other powerful states in the recent past.”