Fox News clips of Tucker Carlson and Tulsi Gabbard trashing Ukraine and the Biden administration were a mainstay of news coverage this week on Russian state television. 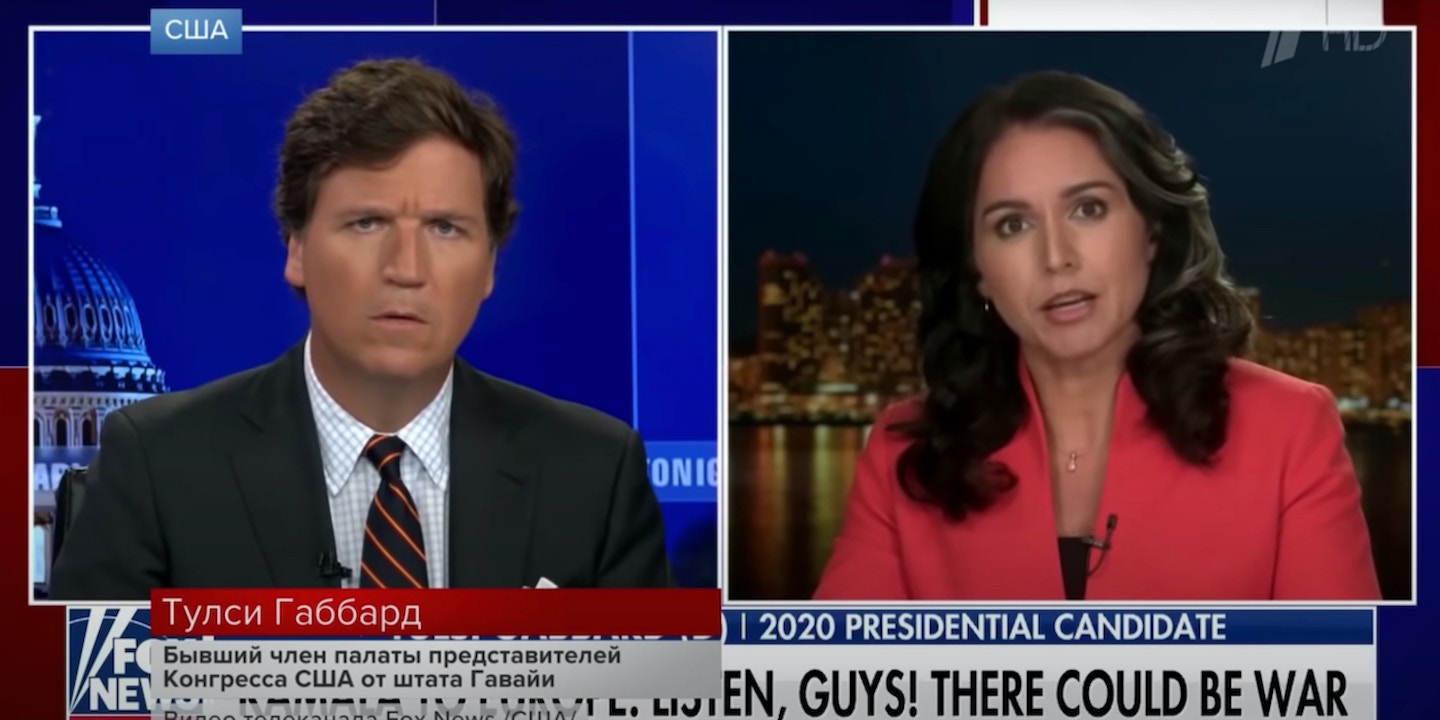 In the hours since Russia launched its military assault on Ukraine, the news on Russian state television has been dominated by official statements and reports from war correspondents. But in the days leading up to the attack, as the state broadcaster worked to tarnish Ukraine and cast American criticism of President Vladimir Putin as hysterical, its producers borrowed heavily from another source: Fox News.

What’s more, one report broadcast on Russian television’s main channel Sunday did more than just quote Carlson: It developed and sharpened a political attack on a prominent Democratic senator that Carlson had just hinted at.

At 8 p.m. on Sunday, a primetime review of the week’s news presented by Dmitry Kiselev, a bombastic Putin favorite, featured remarks from the opening monologue of Carlson’s February 17 show, in which the American commentator trashed Ukraine’s government.

On Sunday, Russian state TV translated this Tucker Carlson rant: "They're promoting war, not to maintain the democracy that is Ukraine. Ukraine is not a democracy. It has never been a democracy in its history and it's not now. It is a client state of the Biden administration." pic.twitter.com/36fziEks90

“These people are so ghoulish,” Carlson said of U.S. officials who provided military aid to Ukraine. “Of course they’re promoting war,” Carlson continued, as his comments were translated into Russian, “not to maintain the democracy that is Ukraine. Ukraine is not a democracy. It has never been a democracy in its history, and it’s not now. It’s a client state of the Biden administration.”

The Russian broadcast cut away from Carlson’s monologue at this point to show Secretary of State Antony Blinken’s appearance at the United Nations that day. But that exactly echoed the next part of the original Fox News broadcast, which also showed Blinken on screen as Carlson mocked his warning that Russia might stage a false flag attack and blame it on Ukraine as a pretext for war.

An hour later, the evening news program on Russia’s main state television channel used a longer excerpt from the same Carlson monologue and shaped its own report to amplify the Fox News host’s attack on a Democrat. In the original Fox News broadcast, Carlson had suggested that Sen. Richard Blumenthal, a member of the Senate Armed Services Committee who worked to arm Ukraine with Javelin anti-tank missiles, was only doing so because of donations from American defense contractors like Raytheon.

Last week, Tucker Carlson suggested Sen. Richard Blumenthal might have pushed to arm Ukraine to aid a campaign donor, Raytheon. Then on Sunday, Russian state TV devoted a segment to Raytheon, Blumenthal and Ukraine, even quoting Carlson in translation. pic.twitter.com/yMTOxsKYuN

Before quoting Carlson’s comments, the Russian report noted that Blumenthal had received hundreds of thousands of dollars in campaign donations from Raytheon and referred to Blumenthal’s false claim that he had served in Vietnam. The Russian broadcast then cut to a part of Carlson’s program in which he showed viewers video of Blumenthal telling MSNBC about the need to supply Javelin missiles to Ukraine. Carlson was then shown laughing at Blumenthal. “So that guy, who lied about his own war service, is pretty excited at the thought of Ukrainians fighting and dying in the streets,” Carlson scoffed.

After cutting away from Carlson, the Russian correspondent noted that President Joe Biden and former President Donald Trump had also received hundreds of thousands of dollars in campaign contributions from Raytheon.

On Wednesday night, just hours before Putin ordered the attack on Ukraine to begin, two excerpts from Carlson’s most recent program were featured in Russian state television’s 8 p.m. and 9 p.m. news broadcasts.

Carlson had started his show Tuesday night with a sarcastic monologue in which he told viewers: “Democrats in Washington have told you it’s your patriotic duty to hate Vladimir Putin. It’s not a suggestion. It’s a mandate. Anything less than hatred for Putin is treason. Many Americans have obeyed this directive. They now dutifully hate Vladimir Putin. Maybe you’re one of them. Hating Putin has become the central purpose of America’s foreign policy. It’s the main thing that we talk about. Entire cable channels are now devoted to it. Very soon, that hatred of Vladimir Putin could bring the United States into a conflict in Eastern Europe.”

Carlson’s comments were so welcome in Moscow that an excerpt from that rant with Russian subtitles was quickly produced by the Russian-language service of RT, the government-funded network formerly known as Russia Today.

During the 8 p.m. news bulletin on Russian state television Wednesday, as Russians tried to make sense of what was about to happen, a dubbed version of Carlson’s monologue was offered to them as an explanation.

On Tuesday, Tucker Carlson claimed that "Democrats in Washington have told you it's your patriotic duty to hate Vladimir Putin." Within hours, the Fox clip was on Russian state TV's evening news broadcast, used to suggest US opposition to Russia's attack on Ukraine is irrational. pic.twitter.com/lGzp7PZhaK

An hour later, Russian television’s main evening news program featured another clip of Carlson’s show from the previous night, an excerpt from his discussion of possible economic sanctions on Russia with Gabbard, who is now a frequent Fox guest and was given a prime speaking slot at the Conservative Political Action Conference this weekend.

Like Carlson, Gabbard sought to blame the U.S. and NATO for supposedly provoking Putin’s attack on Ukraine and suggested that Americans would suffer from higher energy prices if Russia was sanctioned for invading Ukraine.

On the eve of war, Russian state TV showed a translation of Tulsi Gabbard's Fox News criticism of Biden's threat to sanction Russia for attacking Ukraine. "Sanctions don't work. This is whole problem with the Biden administration: they are so focused on how do we punish Putin." pic.twitter.com/pjXxtIrK1h

“These sanctions don’t work,” Gabbard told Carlson in an exchange screened for Russians. “What we do know is that they will increase suffering and hardship for the American people. And this is whole problem with the Biden administration: They are so focused on how do we punish Putin that they don’t care and are not focused on what is actually in the best interests of the American people.”

Russian officials have not been shy about pointing out that fuel prices are likely to spike in Europe and the United States if sanctions are imposed on its vast oil and gas industry. State television reports from Washington on the crisis have repeatedly included close shots of high gas prices and suggested that they could go higher.

On Thursday, after Russia launched its military assault on Ukraine, Gabbard posted the video of her Fox News comments about sanctions on Twitter and suggested, without evidence, that doing anything to press Putin to stop the invasion of Ukraine could lead to a nuclear war.

Biden/Harris tell us we must bear the cost to defend freedom in Ukraine. But while you & your family struggle w/ higher prices, the Power Elite won’t suffer at all. And if the conflict goes nuclear they’ll be safe in bunkers while you, I, & our loved ones are left without shelter pic.twitter.com/75abm9rY35

Gabbard returned to Carlson’s show Thursday night; during her appearance, she blamed Biden for not preventing the war, which she said he could have done by giving in to Putin’s demand to rule out the possibility of Ukraine ever joining NATO.

Tulsi: I do not in any way support Putin’s decision to go into Ukraine… If President Biden and NATO had done what you were just talking about in agreeing we’re going to take NATO off the table for Ukraine… this situation could’ve been prevented… pic.twitter.com/espPertdud

Update: February 27, 2022
As the Russian invasion of Ukraine intensified on Sunday, February 27, the main evening news bulletin on Russia’s Channel One used three clips from Tulsi Gabbard’s recent appearances on Tucker Carlson’s show in which she blamed the United States for the Russian attack on Ukraine.

After first replaying her comments from earlier in the week that “sanctions don’t work,” the broadcast then presented a translated quote of Gabbard telling Carlson on February 11 that “President Biden could end this crisis and prevent a war with Russia by doing something very simple: guaranteeing that Ukraine will not become a member of NATO, because if Ukraine became a member of NATO, that would put U.S. and NATO troops directly on the doorstep of Russia, which — as Putin has laid out — would undermine their national security.” The Russian report notably cut away from the original interview just before Gabbard added: “The reality is that it is highly, highly unlikely that Ukraine will ever become a member of NATO anyway.”

A Russian correspondent in Washington then described and quoted from what Gabbard told Carlson later in the same February 11 interview, that “the military-industrial complex is the one that benefits from this. They clearly control the Biden administration. Warmongers on both sides in Washington who’ve been drumming up these tensions, if they get Russia to invade Ukraine, then, again, it locks in this new Cold War.”

Update: March 14, 2022
As Russian forces moved closer to the Ukrainian capital, Kyiv, in the third week of war, state television in Moscow has continued to show viewers of its main news program translated clips of commentary from Tucker Carlson, to bolster arguments made by the Russian government. On Sunday night, a report copied onto the state broadcaster’s Facebook page showed Carlson complaining that an embargo on Russian oil has caused gasoline prices to spike for Americans. 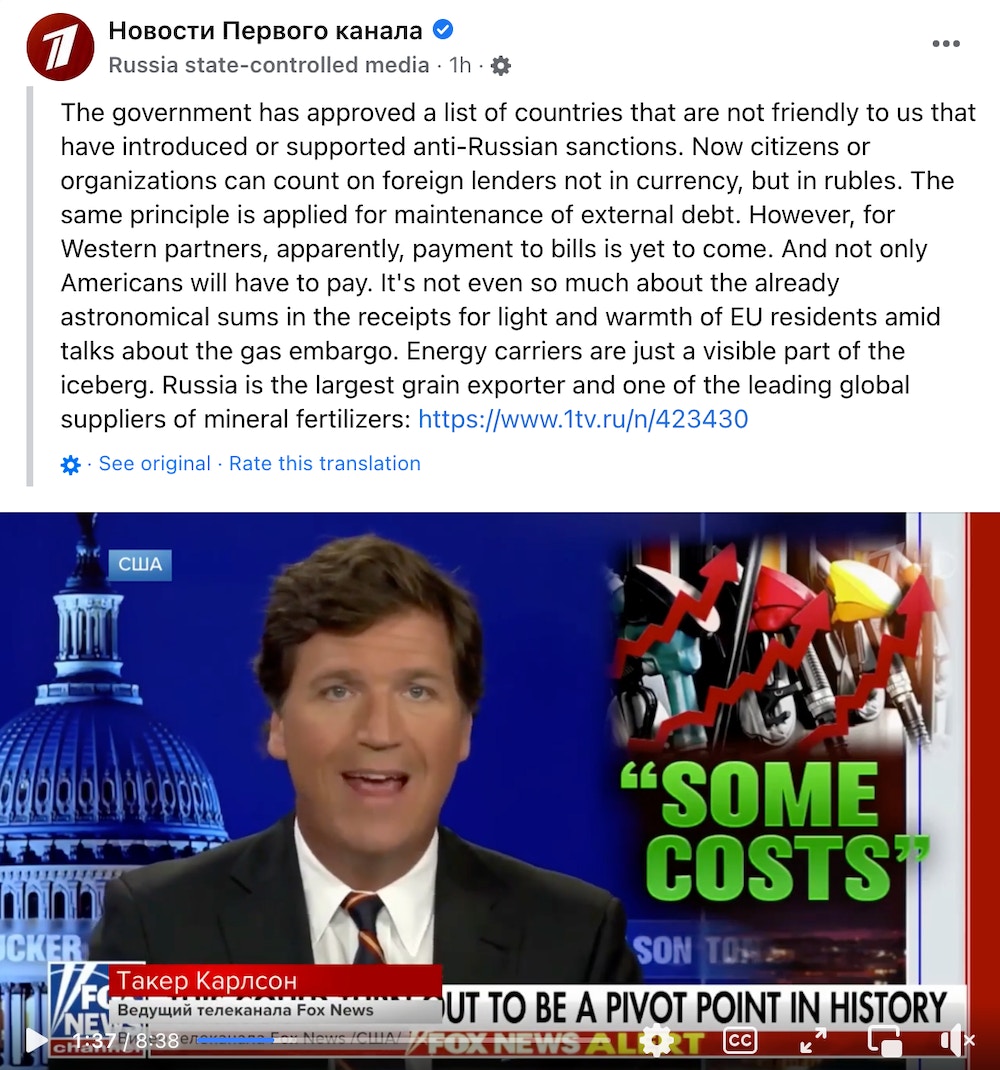 A screenshot from the Facebook page of Russian state television’s main news show.