The families asked the White House to help end the mass starvation crisis in Afghanistan by releasing the country’s U.S.-held foreign reserves. New guidance from the Treasury Department provides a pathway. 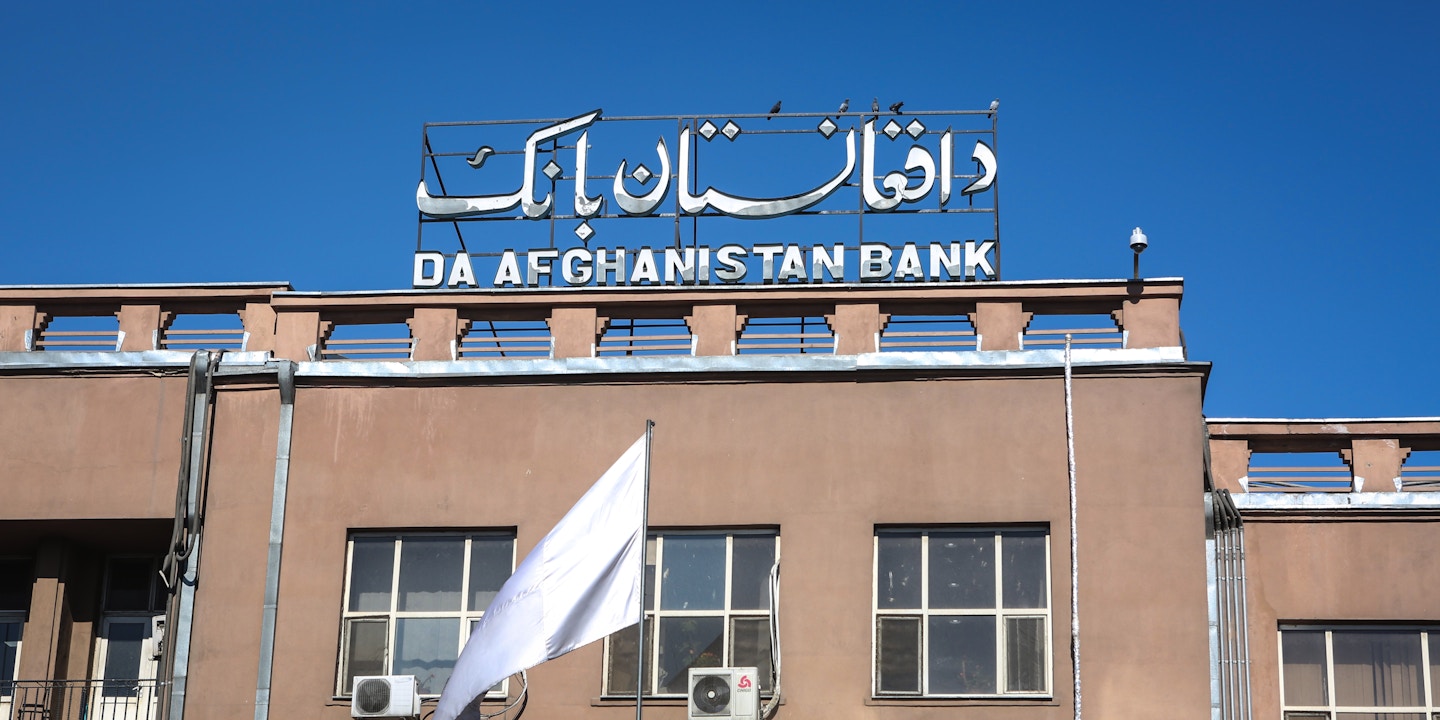 More than 20 years after September 11, family members of those killed in the 2001 attacks have a message for the U.S. government: Release Afghanistan’s central bank assets before millions of civilians die of starvation.

“There is not only a moral imperative in doing this, there is also a national security interest in doing this and preventing Afghanistan from sliding into total collapse,” said Terry Rockefeller, whose sister died at the World Trade Center on 9/11. Rockefeller is a member of September 11th Families for Peaceful Tomorrows, an organization formed by family members of those killed on 9/11 to oppose the war in Afghanistan.

In February, the Biden administration announced that it would split over $7 billion in Afghan assets held in the New York Federal Reserve Bank between a pool for potential settlements for families of 9/11 victims and an ambiguously defined trust fund “for the benefit of the Afghan people.” The White House has yet to clarify when and how it will release the money, wary of the perceived legal and political repercussions that accompany transferring cash to the Afghan central bank, lest it be seen as giving money to the Taliban. White House press secretary Jen Psaki told reporters on February 15 that the administration was incapable of releasing any of the frozen funds until pending litigation has ended, but legal experts have dismissed that claim. On Friday, the Treasury Department issued a new general license to allow economic transactions with a suite of Afghan entities, including the country’s central bank, Da Afghanistan Bank, signaling a potential first step toward unfreezing the funds.

The White House did not respond to a request from The Intercept to clarify whether it stood by Psaki’s comments. The State Department reiterated the administration’s intentions to divert $3.5 billion into a trust fund but would not specify whether it believed that the administration had the power to immediately release those funds.

The administration’s slow-walking has led to a catastrophic crisis that now threatens to destroy more lives than two decades of fighting in Afghanistan, leaving the country’s populace facing desperation of nightmarish proportions. The United Nations has estimated that 1 million children are at risk of starving to death by winter’s end. In December, NPR reported that families were selling their children into marriage to pay for basic necessities like food and fuel. The compounding crises enveloping Afghanistan have drawn backlash from the public — including the family members of 9/11 victims.

“I think the Biden administration should have been more courageous and said that it was their position that this was not Taliban money and they would get it to the Afghan people,” Rockefeller said.

Reporting by The Intercept detailed former White House Afghanistan counsel Lee Wolosky’s work representing dozens of 9/11 victim families in a class-action settlement against the Taliban. The lawyers pursuing the settlements — which seek to stake claim to Afghan funds despite the fact that they are not and never were Taliban assets — stand to collectively earn over half a billion dollars in legal fees drawn from the frozen funds.

Less than a year since the war’s end, a new refugee crisis is emerging as Afghan civilians — some of whom were employed and then abandoned by the U.S. government — flee the combined threats of economic oblivion, widespread food insecurity, and retribution from the Taliban government. Tens of thousands of refugees have been pouring into Pakistan and Iran every week. What the Afghan economy needs, according to experts from the International Crisis Group and International Rescue Committee who testified on the subject in February, is an injection of liquidity — provided by its own central bank funds currently frozen and held in the U.S. The new Treasury guidance released Friday appears to be a step in that direction, though the U.S. government’s slow movement ensures that the crisis will continue to worsen at a rapid pace.

The fine print of the guidance admits that working with the central bank is functionally different from working with the Taliban, and this precedent could serve as the groundwork for a shift in policy toward the central bank. One of the “frequently asked questions” accompanying the guidance asks: “Does Afghanistan-related General License (GL) 20 authorize financial transfers to governing institutions in Afghanistan, including the Central Bank of Afghanistan (Da Afghanistan Bank, or DAB), or state-owned or -controlled companies and enterprises in Afghanistan?”

“You can’t end terrorism by producing more civilian victims, and this is just what is happening now.”

Rockefeller sees the Biden administration’s equivocation on recapitalizing the central bank as the final act of the United States’s failed war on terror in Afghanistan. Peaceful Tomorrows “had a long campaign for years that led to some payments for civilian casualties and payments for hospital care for innocent civilians who had been injured in America’s bombing attacks to bring down the Taliban,” she told The Intercept. “It was our position then that there is no way that you can have a war against terrorism. You can’t end terrorism by producing more civilian victims, and this is just what is happening now, more Afghan civilian deaths even after 20 years of war.”

On February 17, Rockefeller said, Peaceful Tomorrows met with senior Biden administration officials who claimed that a large percentage of the frozen assets consist of money that was first transferred to Afghanistan as humanitarian aid from Western governments and foundations.

“They told us that their research confirmed that the sources of the Afghan bank funds were international assistance,” Rockefeller said. “I thought the Biden administration could have made that its first argument and been much more assertive in saying that it was crucial that a large portion of the funds get to the Afghan people immediately.” The National Security Council did not respond to a request for comment on this argument.

“It’s clear that in some sense the 9/11 family members who are furious about their loss and who want the Taliban to suffer may be under a grave misunderstanding that this is Taliban money, when it is in fact far from it,” said Rockefeller. She said there was also “a grave misunderstanding that Biden took Afghan money and gave it to 9/11 family members, which has not happened,” since the proceedings are still held up in litigation. “It’s my fervent hope that the court decisions will back up what the Biden admin is saying, which is that this was never Taliban money.”

“It’s my fervent hope that the court decisions will back up what the Biden admin is saying, which is that this was never Taliban money.”

Rockefeller also said that Biden officials informed the group that there is another $2 to $2.5 billion in Afghan bank reserves in Europe — making up the country’s more than $9 billion in total foreign reserves — and that this too is likely made up of aid rather than Taliban-generated assets.

Leila Murphy, a Peaceful Tomorrows member who lost her father on September 11, told The Intercept that she thinks releasing billions of dollars in frozen funds to recapitalize the Afghan central bank is within the Biden administration’s powers but that the White House fears the political blowback this action might cause. She characterized the perspective as “rooted in fear and a particular idea of 9/11 victims and the place that 9/11 occupies in the American imagination.”

Over 60 attempts to contact members of the class-action suit pursuing claims against the Taliban were unsuccessful — except for one.

“Aren’t we not supposed to talk to you?” asked one claimant, Joslin Zeplin-Paradise, when reached by The Intercept. “Our lawyer said not to talk to you.”

Lawyers and lobbyists have stepped up their efforts to secure their cut of the $3.5 billion in funds set aside by the Biden administration. Andrew Maloney, one of the attorneys leading the effort to cash in on the frozen Afghan assets, justified his position by telling the BBC, “The reality is, the Afghan people didn’t stand up to the Taliban. … They bear responsibility for the condition they’re in.”

“This money belongs to regular people in Afghanistan. It’s their money, and it should go to them.”

Phyllis Rodriguez, a founding member of Peaceful Tomorrows, disagrees. Rodriguez told The Intercept that the crisis unfolding in Afghanistan is counter to both her own values and those once held by her son Greg, who was killed on 9/11.

“He had wonderful values. We didn’t always agree on everything, but one thing we always agreed on was that war is evil and killing is evil and victimizing is evil. He was an empathetic person who would have certainly thought that millions starving to death is evil,” Rodriguez said.

“The identity of being a 9/11 victim is something I’ve tried to avoid because people assume victims want all these harsh outcomes,” Murphy told The Intercept. “I was at Guantánamo viewing pretrial hearings of those accused of planning the attacks, and I traveled with the victims assistance group, and it was like we were seen as victims that the prosecution wanted us on their side, and they wanted the death penalty.”

“Our principles and our beliefs haven’t changed since September 10, 2001,” said Rodriguez. “We were supposed to be vengeful. I want people to understand that we are not, and that we don’t have to be. This money belongs to regular people in Afghanistan. It’s their money, and it should go to them.”