Imaginary children have been a focal point of GOP attacks on the Supreme Court nominee. This strategy is hardly new. It was a low point that came early on in the contemptible GOP questioning.

Cruz displayed large printouts from a children’s book, “Antiracist Baby” by Ibram X. Kendi, which is taught in Georgetown Day School, where Jackson is on the board of trustees. Whether it is a good pedagogical tool or not, “Antiracist Baby” is not about babies being racists or being told that they are racists. Presumably, since Cruz can read, he knows this. Yet he nonetheless asked the judge, “Do you agree with this book that is being taught with kids that babies are racist?” She sighed, paused, and tilted her head, exasperated.

There is a reason we’re hearing this again and again — and it doesn’t have to do with the Supreme Court confirmation.

What a perfect excuse it was for Cruz to conjure one of the main characters of the Republicans’ current agenda: the imaginary child, ever imperiled and invariably white.

The legacy of decades of conservative paranoiac policies, imaginary children have been a focal point of Republican attacks on Jackson.

These imaginary children have appeared to a farcical degree in the hearings. There were the nonexistent racist babies, along with fantastical babies that had been deemed racists, presumably by woke mobs. They were joined by nonexistent children harmed by sex offenders — whom Jackson had, according to Republican questioning, fought to set free. (She had not.) Then there was an appearance by the imagined specters of cis girls harmed by the presence of trans girls on their sports teams, summoned on the first day of hearings by Sen. Marsha Blackburn, R-Tenn.

There is a reason we’re hearing this again and again — and it doesn’t have to do with the Supreme Court confirmation. With unanimous Democratic support and three confirmations to the federal bench under her belt, Jackson is likely to be confirmed, despite enduring predictable racist dog whistles and bad-faith questions from Senate Judiciary Committee Republicans.

Instead of being about the court, or even Jackson, Republicans are using the current hearings as free campaign ads to push their kultur kampf narratives. The focus on imaginary kids is intended to spark moral panic in conservative, middle-class white parents — a brazen appeal to the base.

In other words, the obscene questioning of Jackson — nodding to extremists, devoid of any attachment to reality, aimed only at stockpiling power exclusively for the same old, sad sack white men — is the bread and butter of today’s Republican Party. 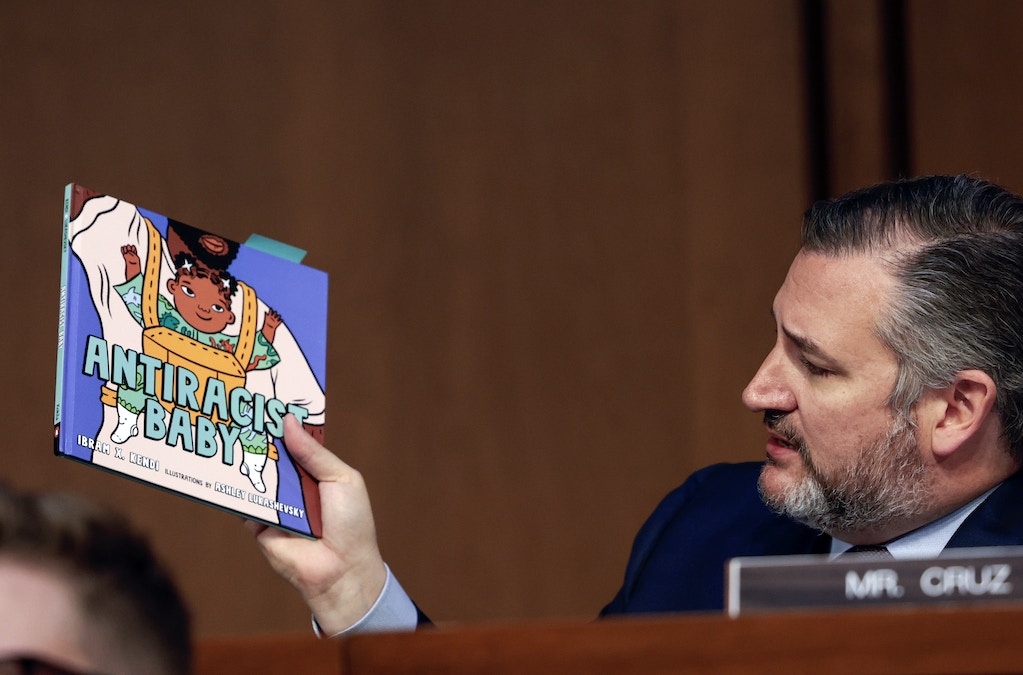 That the Republican Party has placed these imaginary white children at its ideological center would be disturbing enough as just a naked political ploy. That there are living, breathing children — often nonwhite and non-cis — who become the victims of this focus pushes it into the realm of the calamitous.

Consider the hundreds of bills moving swiftly through Republican-led statehouses aiming to make the lives of trans children unlivable; the increasing use of “grooming” as a buzzword to describe those adults who would affirm and support trans kids; the abundant successful local legislation that bans teaching the realities of racism and thus ensures that the white supremacist status quo continues; and, of course, the successful attacks on our reproductive rights in the name of nonexistent babies.

It is no surprise that reactionaries invoke mythical child victims to garner support. As The New Republic’s Melissa Gira Grant, who has long traced the connection between anti-sex trafficking campaigns and the QAnonification of the GOP, noted, “If your ‘enemies’ are an ill-defined yet pervasive threat to children, what wouldn’t be justified in stopping them?”

In response to being used as a tool for racist, patriarchal Republican grandstanding, Jackson displayed remarkable patience.

There is something particularly galling about watching Jackson, who would be the first Black woman to sit on the Supreme Court and who began her career as a public defender, get attacked on questions of child safety. Racist moral panics about unfit Black mothers and unacceptable Black and other women of color have attended some of this country’s most unforgivable (and unfinished) legal histories: enslavement of Black women and their children, forced births, forced sterilizations and eugenics experiments, the war on drugs, the criminalization of sex work and presumed sex workers, and centuries of racist child separation practices.

In response to being used as a tool for racist, patriarchal Republican grandstanding, Jackson displayed remarkable patience — above and beyond what should be asked in the face of bigotry and bad faith.

She clarified at length that which should need no clarifying. She parried Cruz’s attacks, rebutting them in part and ignoring the most noxious of his questions. When it came to the GOP claim, pushed first on Twitter by white supremacist Sen. Josh Hawley, R-Mo., that Jackson had shown undue lenience to child sex offenders, she forcefully responded that “nothing could be further from the truth” — and that the examples proffered by Republicans simply put her in line with a huge majority of other judges.

The facts of the matter are, of course, irrelevant to a politics firmly situated in imagined threats. It is, at least, a relief that this current spectacle of Republican fearmongering will likely not stop Jackson from taking her rightful place on the high court. As a Supreme Court justice, Jackson will be on the side of the real, living children and adults truly endangered by current legal and political tides. That she will be in the small minority is another grim reality we must face and fight.