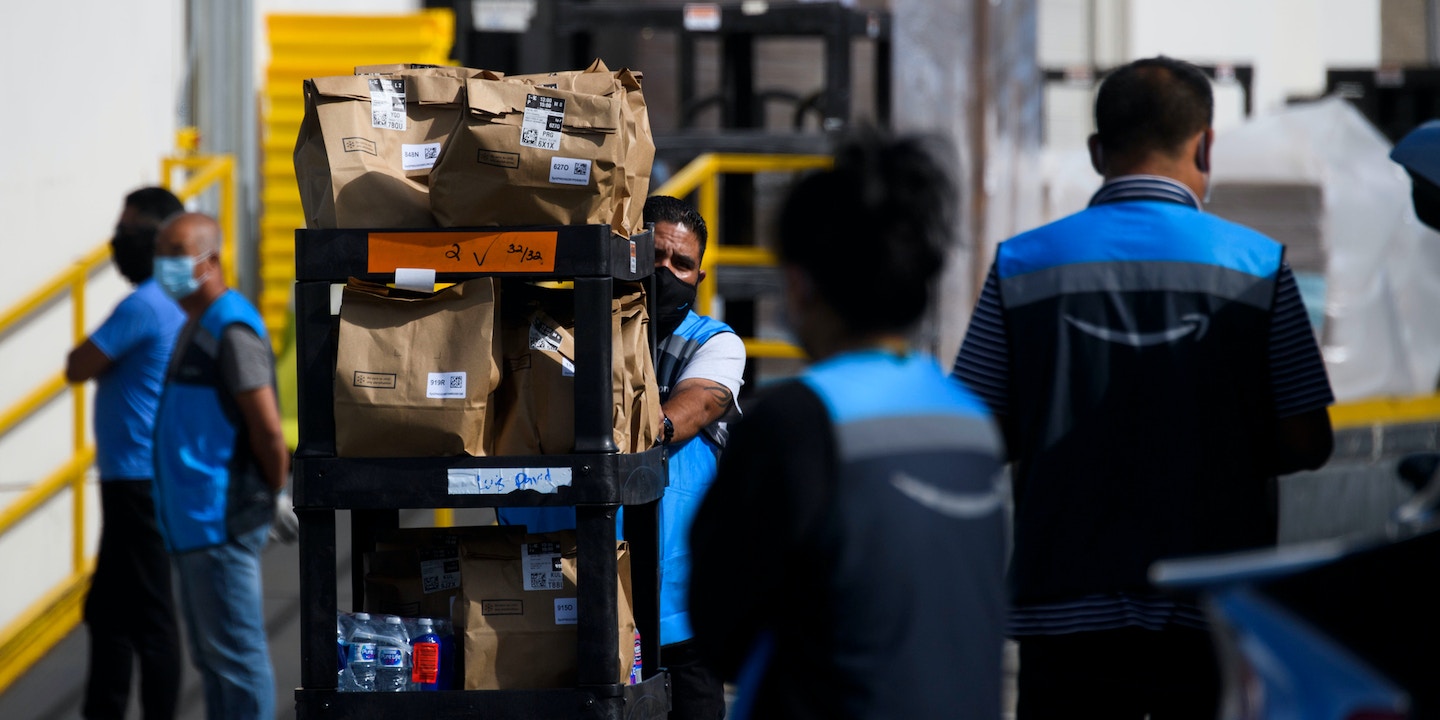 Amazon will block and flag employee posts on a planned internal messaging app that contain keywords pertaining to labor unions, according to internal company documents reviewed by The Intercept. An automatic word monitor would also block a variety of terms that could represent potential critiques of Amazon’s working conditions, like “slave labor,” “prison,” and “plantation,” as well as “restrooms” — presumably related to reports of Amazon employees relieving themselves in bottles to meet punishing quotas.

“Our teams are always thinking about new ways to help employees engage with each other,” said Amazon spokesperson Barbara M. Agrait. “This particular program has not been approved yet and may change significantly or even never launch at all.”

In November 2021, Amazon convened a high-level meeting in which top executives discussed plans to create an internal social media program that would let employees recognize co-workers’ performance with posts called “Shout-Outs,” according to a source with direct knowledge.

The major goal of the program, Amazon’s head of worldwide consumer business, Dave Clark, said, was to reduce employee attrition by fostering happiness among workers — and also productivity. Shout-Outs would be part of a gamified rewards system in which employees are awarded virtual stars and badges for activities that “add direct business value,” documents state. At the meeting, Clark remarked that “some people are insane star collectors.”

But company officials also warned of what they called “the dark side of social media” and decided to actively monitor posts in order to ensure a “positive community.” At the meeting, Clark suggested that the program should resemble an online dating app like Bumble, which allows individuals to engage one on one, rather than a more forum-like platform like Facebook.

Following the meeting, an “auto bad word monitor” was devised, constituting a blacklist that would flag and automatically block employees from sending a message that contains any profane or inappropriate keywords. In addition to profanities, however, the terms include many relevant to organized labor, including “union,” “grievance,” “pay raise,” and “compensation.” Other banned keywords include terms like “ethics,” “unfair,” “slave,” “master,” “freedom,” “diversity,” “injustice,” and “fairness.” Even some phrases like “This is concerning” will be banned.

“With free text, we risk people writing Shout-Outs that generate negative sentiments among the viewers and the receivers,” a document summarizing the program states. “We want to lean towards being restrictive on the content that can be posted to prevent a negative associate experience.”

In addition to the automated system, managers will have the authority to flag or suppress any Shout-Outs that they find inappropriate, the documents show.

A pilot program is slated to launch later this month. In addition to slurs and swear words, the planned list includes the following words:

“If it does launch at some point down the road,” said the Amazon spokesperson, “there are no plans for many of the words you’re calling out to be screened. The only kinds of words that may be screened are ones that are offensive or harassing, which is intended to protect our team.”

Amazon has experimented with social media programs in the past. In 2018, the company launched a pilot program in which employees were handpicked to form a Twitter army advocating for the company, as The Intercept reported. The workers were selected for their “great sense of humor,” leaked documents showed.

On Friday, Amazon workers at a fulfillment center in Staten Island, New York, stunned the nation by becoming the first Amazon location to successfully unionize. This came as a shock to many because it was achieved by an independent union not affiliated with an established union and that operated on a shoestring budget. With a budget of $120,000, the Amazon Labor Union managed to defeat the $1.5 trillion behemoth, which spent $4.3 million on anti-union consultants in 2021 alone.

Adding to the David-and-Goliath overtones, the Amazon Labor Union’s president, Christian Smalls, a 33-year old former rapper, had been fired by the company after leading a small walkout calling for better workplace protections against the coronavirus in 2020. Amazon executives denigrated Smalls, who is Black, as “not smart or articulate” during a meeting with then-CEO Jeff Bezos, according to leaked memo reported by Vice News.

Safety issues have been a perennial concern for Amazon workers. In December, a tornado killed six Amazon employees in a warehouse in Edwardsville, Illinois. Many employees said that they had received virtually no emergency training, as The Intercept reported. (The House Oversight Committee recently launched an investigation into Amazon’s workplace safety policies.)

In 2020, workers at an Amazon fulfillment center in Bessemer, Alabama, tried to join the Retail, Wholesale and Department Store Union. The attempt became unusually high-profile, attracting the attention of President Joe Biden, who released a statement saying, “Every worker should have a free and fair choice to join a union … without intimidation or threats by employers.”

The Bessemer vote failed, but the National Labor Relations Board ordered a new election, citing undue interference by Amazon. The Bessemer warehouse held a second vote that was also counted last week, and while the initial tally favored Amazon, the vote was much closer than the previous one and will ultimately depend on the results of challenged ballots.

Amazon released a statement Friday saying that it is considering filing an objection to the Staten Island union vote, alleging interference by the NLRB.

Update: April 4, 2022, 5:17 p.m. ET
The headline and article have been updated to emphasize that the app is still in the planning phase and has not yet launched. It has also been updated to include comment from Amazon denying that “many” of the words obtained by The Intercept would be screened out.