The $287 Million Pipeline No One Needed? How Spire’s Ambitions Almost Left St. Louis Without Heat

The gas company sowed panic in a bare-knuckle marketing campaign after a court ordered the shutdown of its STL pipeline. 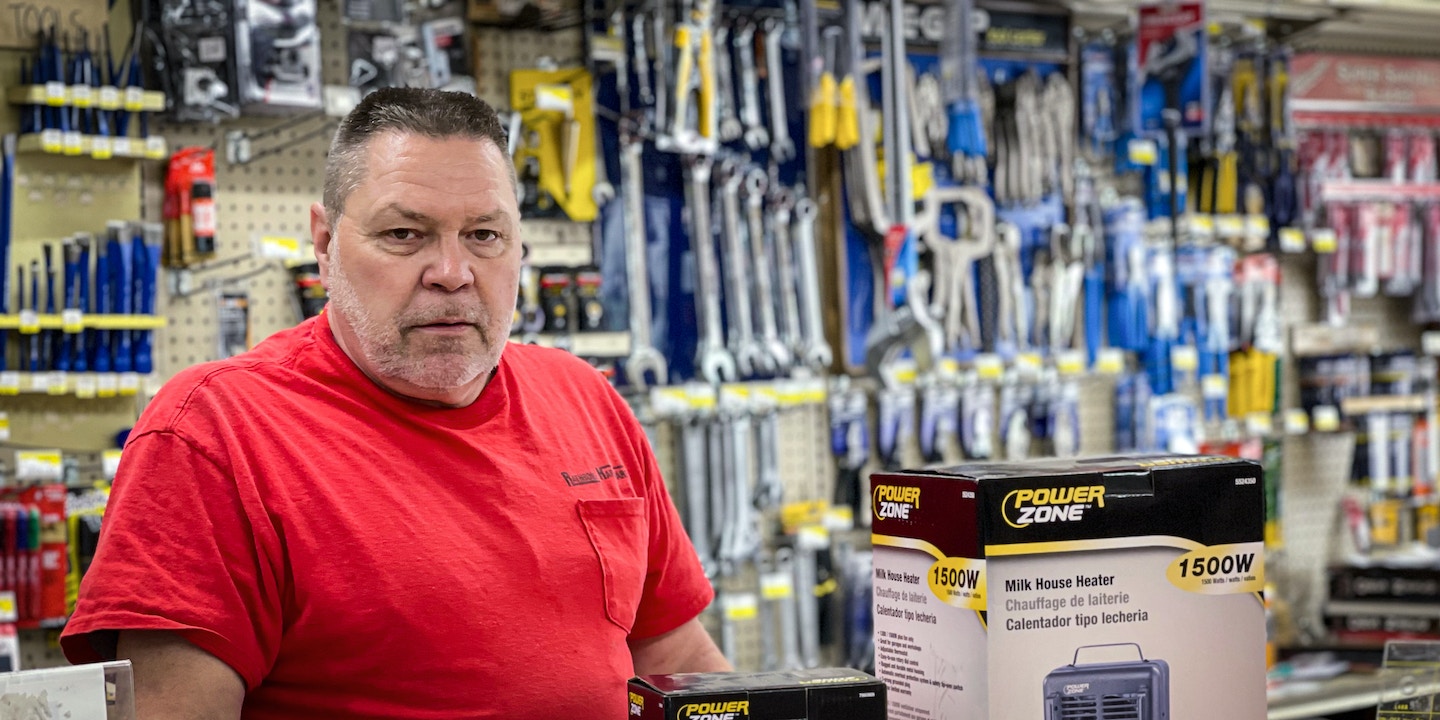 “The weather was warm, and it was strange that people were worried about it,” said Don Heberer, owner of Rathbone Hardware. He estimates that he sold about 20 percent more space heaters than normal for that time of year.

The reason? The local gas utility company was warning people that come winter, they might not have heat.

Spire Inc., an investor-owned gas conglomerate, issued the warnings last year after a court ordered it to shut down its new 65-mile STL pipeline. The court ruled that the company hadn’t proved to federal regulators that the customer-funded $287 million project was even needed.

Spire’s only buyer for the gas from the pipeline was the utility it owns, Spire Missouri Inc. Critics said Spire was self-dealing at the expense of captive gas customers.

The court decision left Spire — and St. Louis — with a problem. The company had spent years and hundreds of millions of dollars disconnecting its customers from the region’s existing pipelines and routing them to its own. Without the new pipeline, Spire warned that a winter storm could leave up to 400,000 customers without heat in the depths of winter.

The energy company quickly undertook a bare-knuckle marketing campaign to warn the public of the threat — and try to convince them of the need for the pipeline.

Behind the scenes, documents show the utility also got high-ranking politicians, including Missouri’s governor, to intervene on its behalf.

At the same time, Spire was working on another strategic interest: undercutting its biggest threat, the transition to renewable energy. Spire has worked closely with other gas utilities that are waging a national campaign against climate action, records show.

Spire and other members of the American Public Gas Association fought federal rules to phase out gas appliances in buildings. They lobbied against proposals to make boilers and furnaces more efficient, according to an internal industry message board obtained by the Energy and Policy Institute and reviewed by Floodlight in partnership with The Intercept and the Missouri Independent.

“The reality is that the gas industry gets a ton of its money — the vast majority of its profit — from residential gas sales.”

Spire’s story is an inside look at how American energy giants are endeavoring to remain relevant in a world questioning the usefulness of gas as compared with an all-electric system powered by renewable energy. For the gas industry, it’s a war on two fronts: Get pipelines into the ground, and resist the shift away from fossil fuels in people’s homes.

“The reality is that the gas industry gets a ton of its money — the vast majority of its profit — from residential gas sales,” said Panama Bartholomy, executive director of the Building Decarbonization Coalition, a nonprofit that advocates for electrification. “So if electrification starts eating into the market share, particularly on the residential side — that’s an existential threat.”

And Spire’s campaign to keep its pipeline open ultimately worked. It’s currently operating the line with a temporary permit while federal regulators review the case. In the meantime, Spire is allowed to charge Missouri customers $2.4 million a month, according to regulatory filings made by the Environmental Defense Fund.

Spire has defended the project, saying that last year’s Winter Storm Uri proved the STL pipeline was needed as a hedge against severe weather “to improve reliability, supply diversity, and provide the St. Louis region with access to lower cost natural gas supply from the Appalachian basin,” according to a statement from Spire corporate communications director Jason Merrill. Spire claims that the pipeline saved customers $150 million in gas prices during the storm because it gave them access to gas from areas unaffected by the freeze.

The savings have not necessarily translated into smaller gas bills, said Gentry Trotter, founder of Heat Up St. Louis, a nonprofit that helps residents with their utility bills.

A Run on Electric Heaters

An announcer blared over the St. Louis airwaves in November 2021: “Federal issues in D.C. could cause the Spire STL pipeline to shut down in mid-December.”

Spire didn’t restrict its alerts to radio ads. It sent its customers emails with similar alarms. And it took to Facebook, LinkedIn, and Twitter with messaging about the pipeline.

“I went to barber shops and hair salons, and they were talking about the pipeline,” said Trotter. “Call the hardware stores. I ain’t ever seen more heaters [for sale] in my life.”

The panic after Spire’s announcements served a purpose: to make sure the company got a temporary operating permit from the Federal Energy Regulatory Commission, even though a court had said that it wasn’t clear if the pipeline was necessary.

“I went to barber shops and hair salons, and they were talking about the pipeline.”

Alongside the public messaging campaign was a private one directed at powerful officials who could advocate on Spire’s behalf, public records show. Missouri Gov. Mike Parson was one successful target.

“As you can imagine, a letter of support from Governor Parson to FERC would be extremely valuable,” read a July 27 email from Spire Missouri’s director of government relations to an aide for the governor.

The email contained a draft letter urging FERC to issue the temporary permit. Parson submitted a letter to the commission three days later in support of the permit.

Spire started making moves toward its first interstate pipeline in 2016, with the expectation that federal regulators would approve a guaranteed profit from customers. Interstate pipeline builders must secure a permit from FERC after showing that there is an economic need for the line and no unreasonable environmental impact. Spire’s permit was approved, even though two FERC commissioners opposed it.

“Spire is not an outlier, it’s an extreme example of a pattern,” said Gillian Giannetti, a senior attorney at the Natural Resources Defense Council who focuses on the regulatory agency.

Since 1999, FERC has approved 487 gas pipelines and rejected only two, according to congressional testimony.

The pipeline looked like an effort “to enrich Spire’s corporate parent rather than a needed piece of energy infrastructure.”

But during Spire’s application process, then-Commissioner Richard Glick wrote that the pipeline looked like an effort “to enrich Spire’s corporate parent rather than a needed piece of energy infrastructure.”

Glick, who was appointed to FERC by former President Donald Trump and made chair by President Joe Biden, pointed out the obvious: Demand for gas in the region was flat or declining. St. Louis was already getting all the gas it needed from other pipelines. And Spire planned to sell the gas from the pipeline to its own subsidiary — meaning that it would be able to cut out any middlemen and make more money on both sides of the deal.

Despite Glick’s reservations, FERC issued the permit in 2018, allowing Spire to earn up to a 14 percent return on equity on the cost of the pipeline. (Under its temporary permit, Spire says it is making 8 percent.)

Soon after, the Environmental Defense Fund sued. Their objection was simple: FERC hadn’t done its homework. In June 2021, a federal court agreed with the environmental group and told FERC to reassess the need for the pipeline in order to protect the public from possible “self-dealing.”

“FERC historically has done the least policing of whether there was need,” said James Coleman, an energy law professor at Southern Methodist University. While Spire was busy building its STL pipeline, it was also fighting for its life against a shift that could make the pipeline useless in the coming years: electrification.

Scientists say the replacement of gas-burning appliances with electric ones is a crucial step to reducing the 20 percent of U.S. carbon emissions that comes from residential buildings and homes.

A collection of 700-plus pages from a gas association group chat obtained by the Energy and Policy Institute reveals an industry fighting for its future.

“Electrification policies jeopardizes [sic] future new gas connections; especially in the South,” Mark Krebs, who was working as an energy policy specialist for Spire at the time, said in the chat. The Deep South is a key region for Spire, which owns gas distribution companies in Alabama and Mississippi.

Krebs was a frequent commenter in the American Public Gas Association’s Direct Use Task Group, a committee that “aims to identify threats and opportunities for natural gas direct use.” In February 2018, Krebs organized members to attend an Electric Power Research Institute conference about electrification to gather intel from the competition. Krebs and the four other task group members who went to the conference are no longer affiliated with the American Public Gas Association, according to Dave Schryver, the association’s president and CEO. He said the group “attended the conference for educational purposes.” Investor-owned utilities like Spire have since been removed from the task force, he added, since he became CEO in January 2020.

Since leaving the task force, Spire has taken its anti-electrification fight to the federal courts, suing the Energy Department to keep it from enforcing rules against installing dirty furnaces and boilers, initially proposed during the Obama administration.

“It’s one thing to share data, info, perspectives,” said Jim Rossi, an energy law professor at Vanderbilt Law School. “It’s another thing to take a consistent self-interested perspective in lobbying for the gas industry and maybe against other uses of energy.”

The future of the Spire STL pipeline remains unclear. FERC is restudying the business and environmental case for the line, and any decision the commission makes may face challenges by environmentalists and scrutiny from the courts.

“The D.C. Circuit and other courts are saying that FERC is not doing enough,” said Alexandra Klass, a professor at the University of Minnesota Law School. “It puts a lot of pressure on FERC, I think it’s good pressure, to revise how they are doing economic analysis and environmental analysis in an age of climate change and more ample renewable energy resources.”

On April 19, the Supreme Court denied Spire’s appeal of the ruling.

But the temporary permit hasn’t quelled Spire’s issues with at least a half-dozen property owners whose land it seized for its pipeline.

Jacob Gettings is one of them. A scar of disturbed dirt extends across the green acres of his soybean farm — once some of the most productive cropland in the Midwest. The pipeline, he said, has messed up the drainage of his fields.

“Before I retired, I had the second-highest yield on soybeans in the state,” Gettings said. He argued in FERC filings that the company owed him millions in damages, but Spire disagrees.