At an industry meeting, the consultant, Katie Lev, laid out the details of Amazon’s latest battles against organized labor. 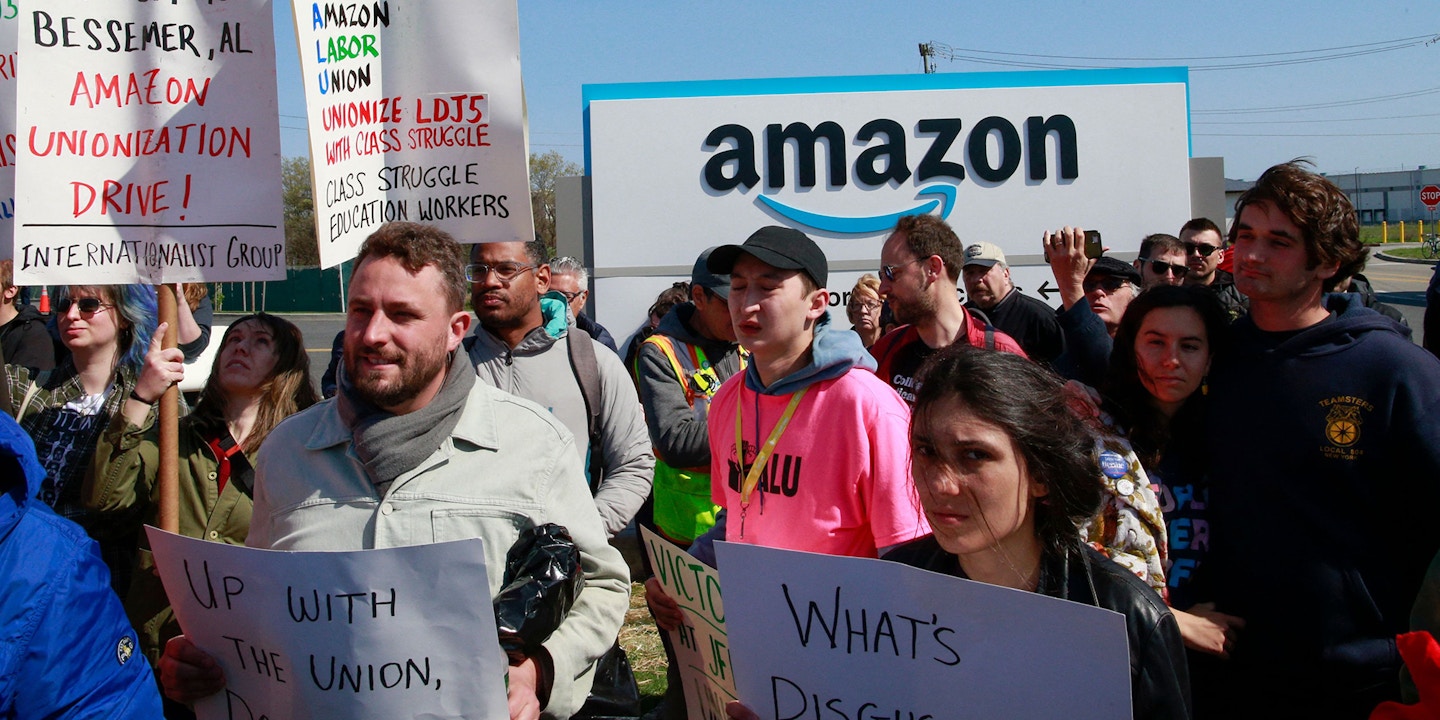 “Wow, have things started changing in union organizing just since I put this presentation together,” said Lev at the annual meeting for CUE, a trade group for labor relations professionals, last week. There are more petitions to form unions, greater media interest in union campaigns, greater online communication among labor activists, and an emboldened union environment, fueled by independent organizing at firms such as Amazon, Lev’s client.

Lev said many of the details for her talk were informed by her years of experience. In 2021, Lev’s company, Lev Labor LLC, was paid $371,676 by Amazon to persuade workers against joining a union. Disclosures show that she has other anti-union engagements with Mapbox, Albertsons, and a North Carolina hospital owned by HCA Healthcare. But her talk also featured inside information gleaned directly from labor unions.

“So very recently, within the last year, the AFL-CIO put out an organizing webinar on campaign strategy,” said Lev. The site, she said, was password-protected, but she gained access by finding the login credentials easily on the union’s website. (One of the unions organizing Amazon workers, RWDSU, is a member of the AFL-CIO.)

The union webinar, said Lev, strongly encouraged workers to form separate communication channels on online messaging platforms, such as WhatsApp and Signal, to relay information about organizing efforts. And then unions have stepped up efforts to build group identity, with tactics to capture workers early on by wearing union T-shirts and committing to a union with their families, making any dissent from the union difficult.

Lev Labor did not respond to a request for comment from The Intercept.

In early April, 8,000 Amazon workers at the JFK8 warehouse in Staten Island, New York, voted to unionize, a historic first for the company. The effort was led by Christian Smalls, a former Amazon worker who formed an independent union and campaigned almost every day at the bus stop used by workers to commute.

In leaked memos, Amazon’s general counsel David Zapolsky described Smalls as “not smart, or articulate.” In 2020, the company fired Smalls after he organized a work stoppage during the early days of the pandemic over the lack of hygiene and protective products provided to workers. The company claimed it had fired him over “violating social distancing guidelines.”

Lev referenced Smalls as a “fired employee” who staged a walkout, “then set up a tent outside the building, giving out free food, free weed, and playing music.” The campaign, Lev said, prevailed, and corporations should be wary that “unions are going to figure out a way to mimic” the independent Amazon organizing campaign success.

The Covid-19 pandemic, Lev explained, has created a fertile ground for union organizing.

The remote work dynamics have made workers not only more “tech-savvy,” she said, but social distancing rules have made it difficult for employers to force workers to attend meetings designed to persuade workers against a labor union. New York rules until recently, Lev noted, prevented small group meetings, effectively making “captive audience” meetings — a term of art for anti-union presentations that companies require workers to attend — impossible to schedule.

Union organizers also curtailed home visits because of Covid, said Lev. “I’m a little disappointed, because that was a very good tactic to help me as I’m running a campaign because people get mad when someone shows up at their house,” she laughed.

Lev also said that what distinguishes Amazon and similar campaigns, such as the growing movement to unionize Starbucks, is the profile of the workers.

“What happened at Starbucks and what’s happened to Amazon is not just the employees, it’s college students, college graduates, law school students getting jobs, either in Amazon warehouses or in Starbucks stores as baristas, and using that job to build their organizing resume,” said Lev.

During the question and answer portion of her presentation, Lev pushed back against the notion that these workers are naive.

“Gen Z campaigns are led by people with purple hair and tattoos, but I do not think they are naive.”

“Gen Z campaigns are led by people with purple hair and tattoos, but I do not think they are naive,” she said. “They know exactly what they are doing, and they’re often fresh out of law school and they’re activists. And it’s not hard to come in as a young person into a facility and bring a group of younger employees onto your bandwagon. So they’re not, it’s not the employees that necessarily are leading it, they’re partnering with outside organizing and using a different kind of salt than they have used historically.”

The term “salt” refers to a union organizer who joins a company with the intention of sparking an organizing campaign from the inside.

During her talk, Lev echoed many of the same themes articulated by Ken Hurley, the now-former vice president of labor relations for Kellogg’s, who also spoke at the event. Hurley was let go after The Intercept made public his comments describing the union as “terrorists.” Lev warned repeatedly that workers are changing the media dynamic by filming allegedly unsafe or unseemly behavior by managers and posting the materials on social media.

“The unions are creating viral videos creating reasons to get employees more interested than just talking about the issues,” said Lev.

Amazon has moved aggressively to prevent unionization at its facilities. The company spent $4.3 million on persuasion consultants such as Lev last year.

That total doesn’t include money for outside advertising or public relations, such as work by Democratic firm Global Strategy Group, which placed online ads against the union campaign. Nor does it include high-priced law firms such as Hunton Andrews Kurth LLP, which has filed National Labor Relations Board petitions on behalf of Amazon charging that unions violated the law.

Despite the defeat last month, Amazon won its latest campaign against the union. On Monday, in a setback for organizing efforts, workers at the LDJ5 warehouse, also in Staten Island, rejected a bid for unionization.