How America’s Evangelicals Turned Themselves Into an Anti-Abortion Machine

The books and lectures of Francis Schaeffer played a key role in politicizing Protestant evangelicals and turning them against Roe v. Wade. Francis Schaeffer at the 1981 L’Abri Conference in Urbana-Champaign, Ill.

No one who looked at Francis Schaeffer in the late 1970s would have figured him for a fundamentalist preacher.

The Pennsylvania native had the air of a college professor on a long sabbatical. He sported long gray hair and a goatee and lived in the Swiss Alps, where he dressed in faddish clothes and ran a retreat he called “L’Abri,” which means “the shelter” in French. One of his visitors even included the LSD guru Timothy Leary. Schaeffer kept his distance from the tradition-bound Protestant evangelical culture that was then rapidly growing across the American suburban landscape.

Yet by the late 1970s, Schaeffer had emerged as the intellectual driving force behind the political mobilization of Protestant evangelicals across the United States. Barely recognized outside evangelical circles, Schaeffer was nonetheless the man who first made evangelicals care about politics — and specifically about abortion.

When the Supreme Court legalized abortion in its landmark Roe v. Wade decision in January 1973, Protestant evangelicals did not protest. At the time, evangelicals were not yet politically involved on any major issue. But just a few short years later, they were at the forefront of what became a four-decade conservative assault on Roe v. Wade, a bitter campaign that now appears to be on the brink of success, thanks in no small measure to Schaeffer’s efforts.

“We helped make a movement that went totally off the rails,” said Schaeffer’s son, Frank Schaeffer, who at first worked with his father and later became a liberal activist.

Anyone who wants to understand the modern politics of the Christian right must understand Schaeffer. 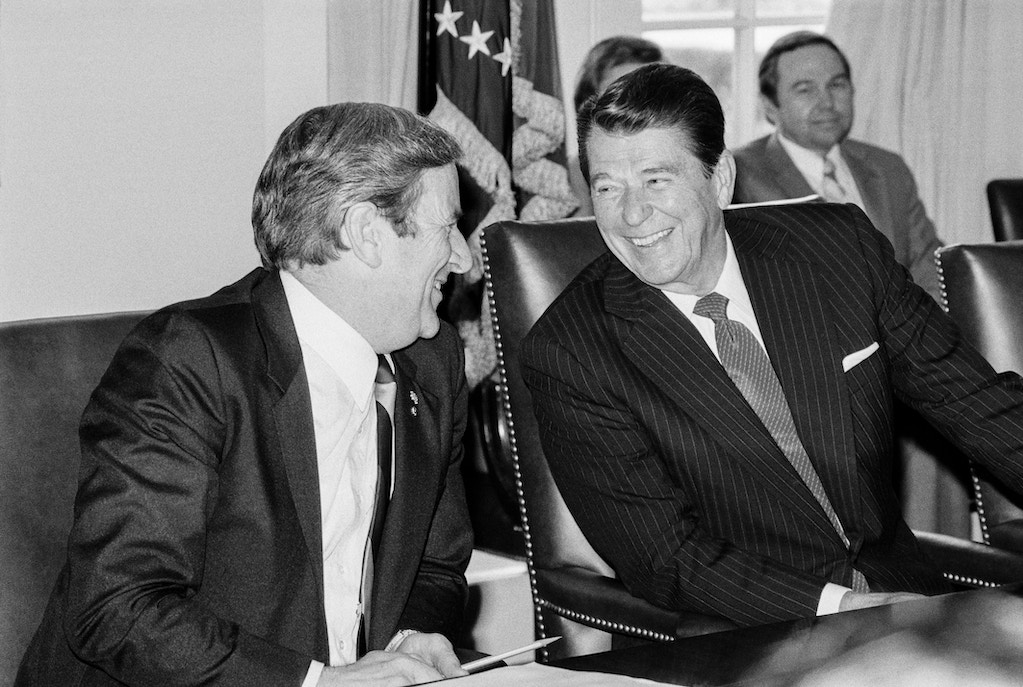 President Ronald Reagan and Rev. Jerry Falwell sit together at the White House in Washington, D.C., on July 12, 1983.

Schaeffer emerged at just the right moment. Until the late 1970s, evangelicals were a small and badly splintered group, and most of them adhered to a mystical theology that focused on the apocalypse and the “rapture” and the second coming of Jesus Christ — leading them not to care much about everyday politics.

But by the late 1970s, a massive surge in evangelical church membership swept the country, as millions of young baby boomers had what they described as “born-again” experiences. In what religious experts later called the fourth “Great Awakening” in U.S. history, millions of middle-class suburban teenagers and young adults, searching for meaning in the midst of the economic and political turmoil of the 1970s, sought out evangelical churches. They deserted traditional, mainline religious denominations in droves and began to dominate the tiny evangelical churches that had dotted the rural landscape for decades.

They soon began to create bigger churches — and discovered politics. When they did, Schaeffer was the man whose ideas they sought out to help them frame a new set of right-wing political beliefs.

It was through Schaeffer’s books, lectures, and films that he influenced American evangelicals. His book “How Should We Then Live?” — published in 1976 — traced what he described as the decline of Western culture. He claimed that the rise of secular humanism during the Renaissance had led to the corruption of Western civilization.

In the book and an accompanying film series that was viewed widely among evangelicals at the time, Schaeffer set up a conflict between the Renaissance and the Protestant Reformation. He claimed that the modern history of Western civilization was dominated by a struggle between the secular humanist impulses of the Renaissance and the purifying religious impulses of the Reformation. In Schaeffer’s mind, the Renaissance of Italy and southern Europe had been a ruinous influence on the West, while the Reformation of Germany and northern Europe had provided the foundation for all that was good in Western civilization.

In the film series based on “How Should We Then Live?” Schaeffer argued for the West to return to the stringent religious tenets of the Reformation in order to avoid the decay and ruin of secular humanism. He believed that the West fell short whenever it was not guided by the Reformation’s focus on the Bible. This was an argument that could easily be used in favor of the creation of a Christian theocracy in the United States.

“The Renaissance could have gone in a good direction or a poor one,” he said in the film series. “Freedom was introduced both in [northern Europe] by the Reformation and in [southern Europe] by the Renaissance. But in the south, it brought forth license. The reason was that the humanism of the Renaissance … which began with man being central, eventually has no meaning for man. But in the north, the men of the Reformation, standing under the scripture, regained direction, and the totality of life as well as nature became a thing of beauty and dignity. Man was given a reason for being great. And he was given a reason for freedom.”

It may seem strange today to think that a book and a film series based on these pseudo-intellectual ideas could attract much attention, yet Schaeffer triggered a revolution among evangelicals. His strange junk history, setting up a supposed conflict between the secular humanism of the Renaissance and the religious purity of the Reformation, appealed to evangelicals who were looking for a historical framework in which to understand politics and current events.

His attacks on secular humanism resonated with anxiety-ridden suburbanites who were just starting to embrace fundamentalism. Before long, “secular humanism” became the catchphrase widely used by evangelicals to describe the evils of liberalism in modern American politics. 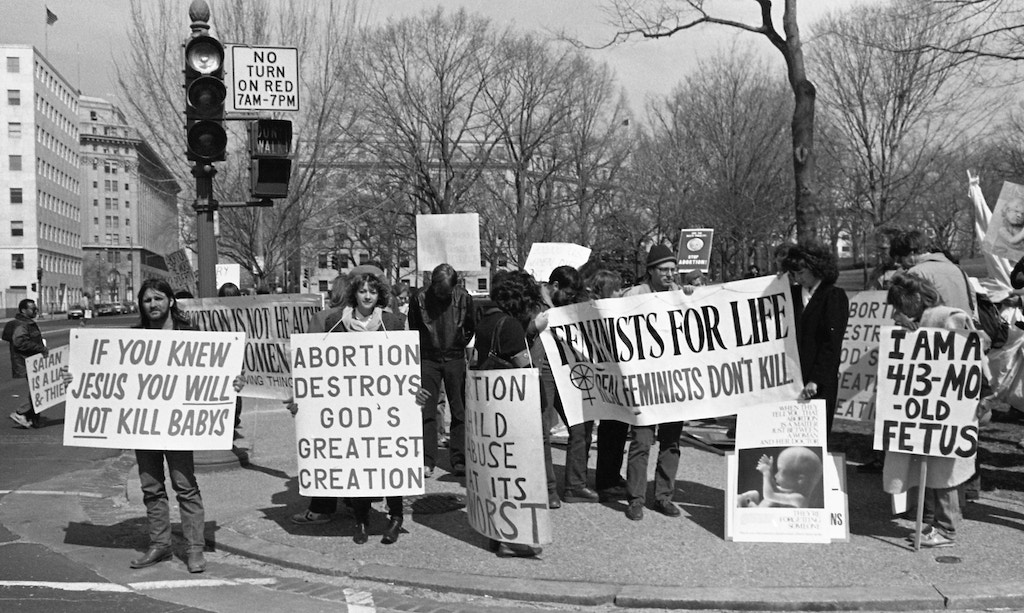 In 1979, Schaeffer turned his focus specifically to abortion. Six years after Roe v. Wade, he had come to believe that there was no more powerful symbol of secular humanism than legalized abortion. And so he and C. Everett Koop, a born-again pediatric surgeon from Philadelphia, launched a four-month, 20-city film and lecture tour based on their new anti-abortion book, “Whatever Happened to the Human Race?”

Today we would say that “Whatever Happened to the Human Race?” went viral. Koop later described how the lectures were mobbed by thousands of young evangelicals. The lecture tour became the crystallizing event that finally got fundamentalists engaged on abortion, an issue they had largely ignored until then because they considered it to be an issue that only concerned the Catholic Church, which they had long distrusted.

“I think it was the first time that most Christians even knew what the issue was,” Koop later said. The lasting political and cultural significance of the Schaeffer-Koop lecture tour within conservative circles became obvious in 1981, when Koop was named U.S. surgeon general by the newly elected president, Reagan.

Schaeffer followed up “Whatever Happened to the Human Race?” with another book that landed like a bombshell among evangelicals. In that 1981 book, “A Christian Manifesto,” he urged evangelicals to engage in civil disobedience to try to stop abortion.

“It is time for Christians and others who do not accept the narrow and bigoted humanist views rightfully to use the appropriate forms of protest,” he wrote.

There does come a time when force, even physical force, is appropriate. … It is time we consciously realize that when any office commands what is contrary to God’s Law, it abrogates its authority. And our loyalty to the God who gave this law then requires that we make the appropriate response in that situation to such a tyrannical usurping of power. … This may include doing such things as sit-ins in legislatures and courts, including the Supreme Court, when other constitutional means fail. We must make people aware that this is not a political game, but totally crucial and serious. The bottom line is that at a certain point there is not only the right, but the duty, to disobey the state.

After he urged his Christian supporters to take to the streets, thousands of them did, through groups like Operation Rescue, a major nationwide anti-abortion protest movement that turned abortion clinics into battlegrounds in the 1980s and early 1990s. Randall Terry, the founder of Operation Rescue, told me in an interview for my 1998 book, “Wrath of Angels,” that “what Schaeffer did was to build the off-ramp.” He meant that Schaeffer had provided a new political direction for evangelicals.

The anti-abortion movement of the 1980s and 1990s did not stop at clinic sit-ins; a wave of clinic bombings and murders of abortion providers also marked the period. While Schaeffer did not engage in violence himself, he still shares some of the blame for creating the intellectual ferment that incubated the violent, extremist wing of the anti-abortion movement.

He died of cancer in 1984. But nearly 40 years later, it is not a stretch to think of Schaeffer as one of the true authors of the new leaked Supreme Court draft ruling overturning Roe v. Wade.