Documents show that in 2021, arms made and funded by the United States destroyed UNRWA schools, USAID projects, and a Coca-Cola plant. 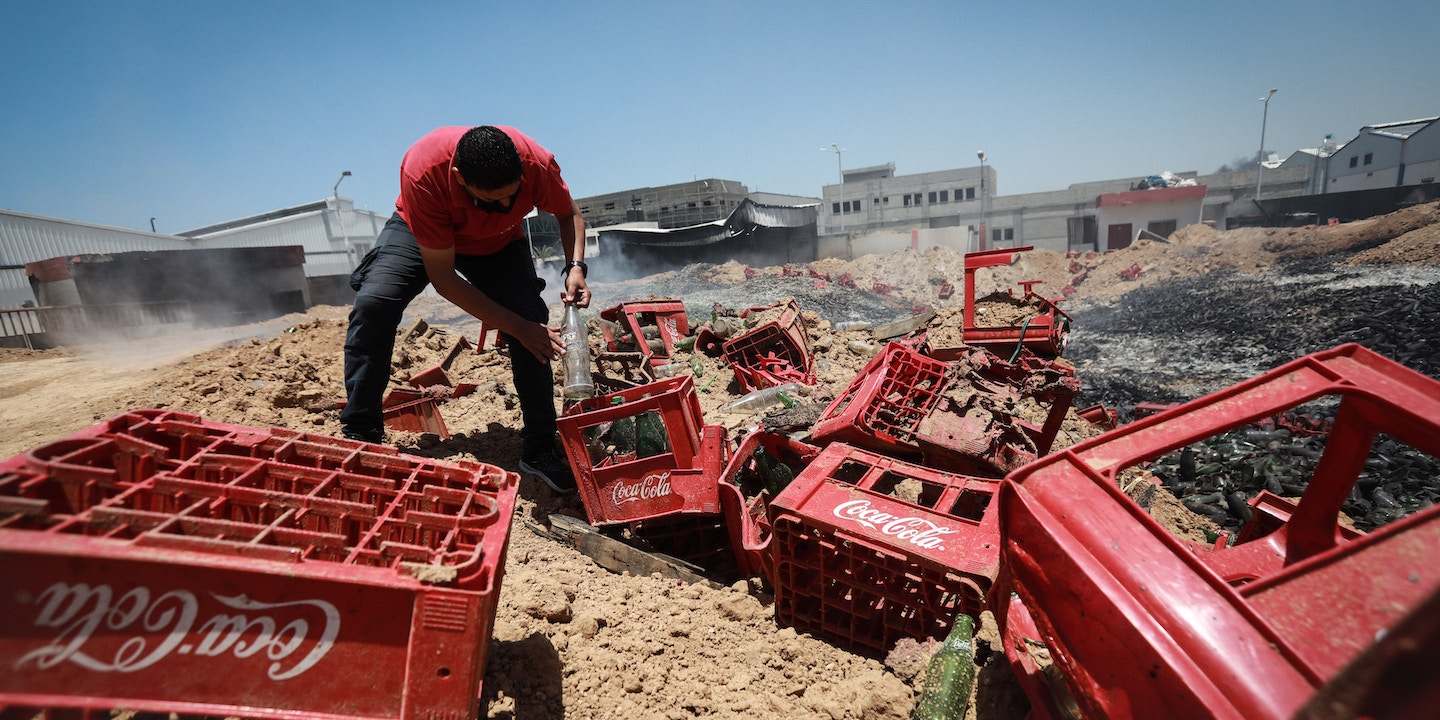 Last May, in an assault on the occupied Gaza Strip, Israel deployed hundreds of bombs, missiles, and shells, killing over 240 Palestinians and wounding more than 1,900 others. More than half of the dead were civilians, according to the Israeli think tank Meir Amit Intelligence and Terrorism Information Center, despite Israeli claims that it only targets combatants from Hamas and other Palestinian militant groups.

At the end of the 11-day assault, tens of thousands of Gazans were displaced from damaged homes, already struggling in a region with a 50 percent unemployment rate, toxic water, and crumbling infrastructure. Thousands of housing units, hundreds of schools, and 19 health care facilities were damaged.

Compounding the devastating toll on Palestinian civilians, weapons made and funded by the U.S. were used to destroy American humanitarian projects and businesses, documents and reporting reviewed by The Intercept show. The destruction reached multiple hospitals and water treatment facilities supported by the U.S. Agency for International Development; dozens of schools operated by the State Department-funded United Nations Relief and Works Agency for Palestine Refugees in the Near East, or UNRWA; and a Coca-Cola plant built by a U.S. citizen.

“The vast majority of ammunition used by Israel is manufactured or subsidized by the U.S.,” Raed Jarrar, advocacy director at Democracy for the Arab World Now, or DAWN, told The Intercept. “It’s fair to say that every Israeli munition is subsidized by the U.S. one way or another, by U.S. tax dollars.”

Impoverished in no small part thanks to a decade-and-a-half-long Israeli blockade, Gaza relies heavily on foreign aid to avert the worst humanitarian outcomes. The State Department had just renewed a lapsed funding commitment to the UNRWA, contributing $150 million to support more than half a million Palestinians with schools and health care facilities. According to documents compiled from the United Nations, the Palestinian Authority, and human rights groups, more than 100 UNRWA facilities in Gaza were damaged in the 11-day bombing campaign in May 2021, requiring over $1 million in repairs. Dozens more schools administered by the Palestinian Authority suffered similar damage.

It was hardly the first time that U.S.-funded weapons had been used to destroy aid projects the United States supports. In 2014, during an earlier Israeli attack on Gaza, a Hellfire missile manufactured and paid for by the United States targeted a UNRWA school, killing 10 civilians. The massacre drew widespread condemnation, even eliciting a rare rebuke from the Obama administration, whose press secretary decried it as “totally indefensible.” What remained unspoken then was the fact that both the missile and the school were funded by the U.S. government.

“A major reason for the perpetuation of the Israeli occupation … is the extraordinary military, diplomatic, and political support given to it, largely without conditions, by the United States.”

The State Department was not the only federal agency whose funds supported aid projects that U.S. weaponry destroyed. Documents and news reports reviewed by The Intercept show that more than a dozen factories in East Gaza’s industrial zone, built with funding from USAID, along with several USAID-funded projects for providing water, hygiene, and sanitation, were struck as well.

In Khan Yunis, Rafa, and Beit Lahia, wastewater treatment infrastructure and water reservoirs funded by USAID, which the U.S. government spent millions to construct, were destroyed by aerial attacks that affected more than 300,000 civilians. Ninety-seven percent of the water in Gaza is contaminated, resulting in a widespread public health crisis, rendered even worse by the destruction of U.S.-funded water infrastructure.

“A major reason for the perpetuation of the Israeli occupation, and the deaths and suffering which accompany it, is the extraordinary military, diplomatic, and political support given to it, largely without conditions, by the United States,” said Michael Lynk, the recently departed U.N. special rapporteur on the situation of human rights in the Palestinian territories. “This American military assistance is provided, notwithstanding the fact that congressional laws governing U.S. weapons exports state that recipient countries cannot be engaged in consistent patterns of gross human rights violations.” An exploded shell inside a damaged classroom hit during Israeli airstrikes on the Zeitoun neighborhood in Gaza City on May 30, 2021.

While Israel is the largest recipient of U.S. military aid, it is subject to virtually no checks in operation ensuring that U.S. weapons are not used to commit war crimes, destroy U.S.-funded projects, or damage the property of U.S. citizens in Gaza. Statutes that govern how aid to the Palestinian territories can be disbursed, however, are stringent. The audits ensuring that there are no ties between U.S. funding and Hamas cost millions of dollars, sometimes exceeding the cost of the very aid projects being audited.

Since 1948, the United States has provided Israel with over $150 billion in assistance, receiving in exchange a foothold in a region of massive strategic importance. The current model exists under a memorandum of understanding that President Barack Obama signed in 2016, committing to $38 billion in aid between 2019 and 2028 with an open-door policy for additional aid — like the billion dollars Congress gave Israel in March for its Iron Dome missile defense system.

The aid system also provides cash-flow financing, a system resembling layaway, that allows Israel to purchase weapons in the present using money from the future. And it contains an offshore procurement exemption — offered to no other country — that allows Israel to spend U.S. tax dollars on its own weapons industry without disclosing how it spent the money to Congress or the American public. And of course, the United States maintains its own stockpiled weapons in Israel, available for use by the Israel Defense Forces — despite Israel’s status as one of the largest arms exporters in the world. In two instances, Israel tapped into the U.S. stockpile to wage campaigns against Hamas and the Lebanese militant group Hezbollah.

The end result is an Israeli arsenal almost entirely composed of weapons made or subsidized by the U.S.

As bombs fell on the Gaza Strip last May, the smell of roasting nuts and sizzling potatoes was replaced with the overwhelming stench of burned plastic. A potato chip factory and the Maatouq ice cream factory, which once produced snacks in the hope of instilling a glimmer of joy in the blockaded strip, were completely destroyed in the bombing.

Many of the companies established in Gaza’s industrial zone did so under the pretext that the Israeli military would not bomb the commercial site. Financed by USAID and fired on by U.S.-funded weapons, the area was thought to be protected under the auspices of the Oslo Accords, which created special economic zones intended to supplant conflict with mutually beneficial free trade.

Also impacted were the Foamco mattress factory — the main producer of mattresses for Gaza — the Abu Iskandar plastic factory, the Clever detergent factory, the Siksik plastic pipes factory, and the Al-Wadi food plant, resulting in tens of millions of dollars in damage. The factories employed 1,500 Palestinians and were severely impacted by the shelling in the early morning hours on May 17 and 18, 2021.

Al Ahli Arab Hospital, which received a $900,000 grant from USAID to build a surgery center, was also damaged, as was Beit Hanoun Hospital, another recipient of USAID funding.

In a highly symbolic display of just how far Israel’s disregard for U.S. material interests in Gaza extends, a Coca-Cola factory — long a hallmark of America’s global reach — served as yet another casualty of shelling during the May onslaught.

“Coca-Cola is also a shareholder, not just a licensor, and I am a shareholder as a U.S. citizen, so this affected many U.S. citizens,” Zahi Khouri, the factory’s owner, told The Intercept. “We had thousands of pallets burned, and there was damage to the logistics area. There was damage in the industrial estate, but what was also damaged was the investment of Coca-Cola in a project through Mercy Corps where we built a water purification station for a refugee camp.”

According to the U.S. State Department, Coca-Cola’s 15 percent stake in the company operating the plant represents the single largest private U.S. investment in Palestine. Palestinian firefighters douse a huge fire at the Foamco mattress factory in the northern Gaza Strip on May 17, 2021.

While mechanisms for punishing war crimes perpetrated with U.S. support are selectively enforced against many other countries, the lack of scrutiny over the Israel Defense Forces’ use of American weapons is glaring. Amid last May’s onslaught, the Carnegie Endowment for International Peace detailed a number of U.S. laws violated by Israel’s attacks. These included the Foreign Assistance Act, which stipulates that aid cannot be provided to a country “which engages in a consistent pattern of gross violations of internationally recognized human rights”; the Arms Export Control Act, which bans U.S. military assistance to countries using weapons for reasons other than “legitimate self-defense”; and the Leahy laws, named after outgoing U.S. Sen. Patrick Leahy, D-Vt., which ban weapons sales to military units that have committed “a gross violation of human rights.”

With Leahy’s impending retirement, a Senate all too content to take campaign contributions from defense contractors and Israel lobby groups stands to lose one of its few outspoken defenders of human rights. After decades fighting to preserve and enhance his self-titled law and continued efforts to investigate Israeli war crimes, Leahy now holds the powerful position of chair of the Appropriations Committee, overseeing much of the spending his politically aligned colleagues have singled out for critique.

In May 2021, as last year’s bombing campaign drew to a close, Sen. Bernie Sanders, I-Vt., and several progressive members of the House of Representatives introduced resolutions to block a $735 million weapons package that included the same type of precision-guided bombs that Israel was already using to shell Gaza.

“I believe that the United States must help lead the way to a peaceful and prosperous future for both Israelis and Palestinians,” Sanders said at the time. “We need to take a hard look at whether the sale of these weapons is actually helping do that or whether it is simply fueling conflict.”

But the White House demurred. “We have seen reports of a move toward a potential cease-fire. That is clearly encouraging,” said then-White House press secretary Jen Psaki. The Biden administration approved the sale.

This May, Israel launched another bombing campaign on Gaza.