The state’s new ban is the most extreme in the country, going further than Texas’s notorious S.B. 8 by banning abortion after fertilization. 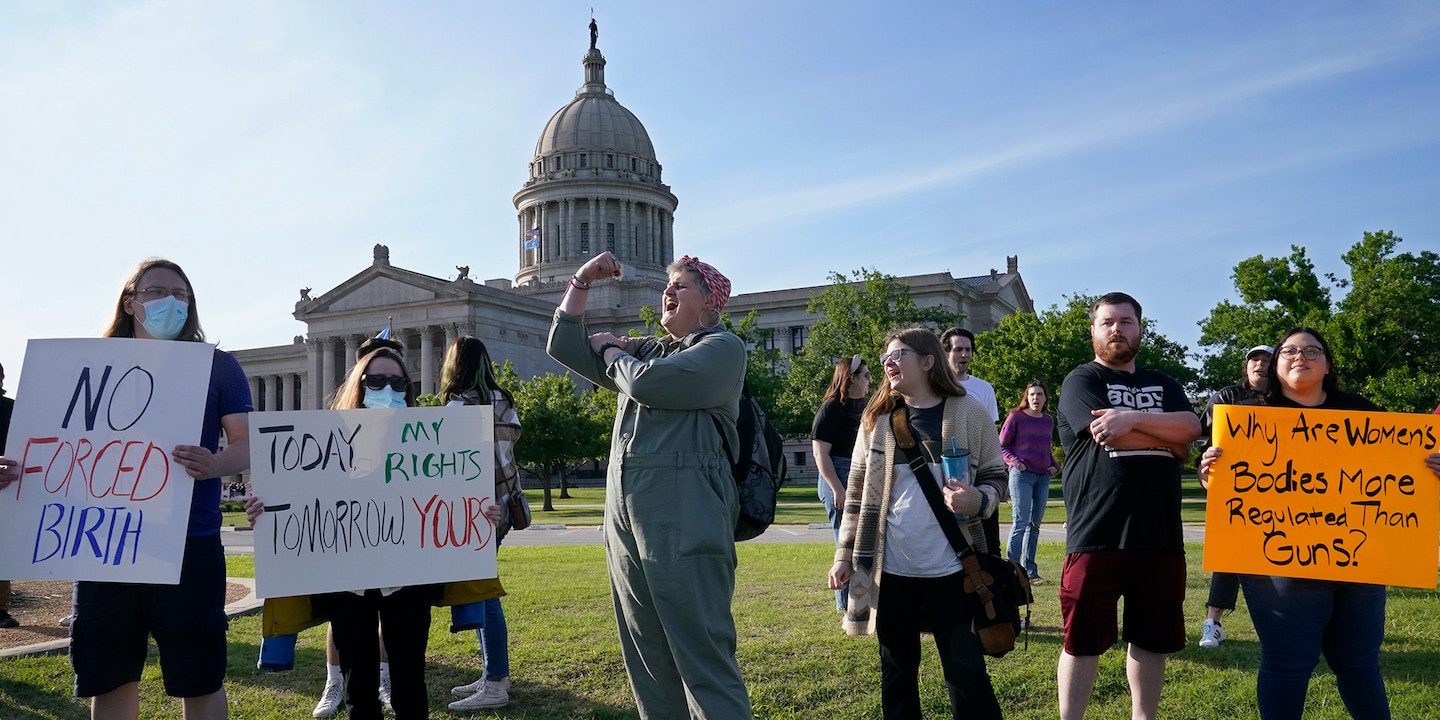 In the waning days of their legislative session, Oklahoma lawmakers passed a bill Thursday that would immediately outlaw all abortion in the state. The bill is awaiting the signature of Gov. Kevin Stitt, who has vowed to sign any anti-abortion legislation sent to his desk.

“There’s no denying: This is a very dark day, and unfortunately, dark days are ahead,” Rabia Muqaddam, senior legal counsel with the Center for Reproductive Rights, said on a press call.

The latest attack on abortion in Oklahoma comes on the heels of Politico’s publication of a leaked draft Supreme Court opinion written by Justice Samuel Alito in a pending Mississippi case that would topple the constitutional right to abortion first acknowledged in Roe v. Wade. The final opinion in that case, Dobbs v. Jackson Women’s Health Organization, is expected late next month.

The new Oklahoma ban is modeled after the notorious Texas Senate Bill 8, which banned abortion after six weeks, long before many people even know they’re pregnant. Texas lawmakers sought to shield their law from court challenges by outsourcing its enforcement to private individuals as opposed to a state actor like the attorney general. The law allows literally anyone to bring a private civil suit against any health care provider they believe may have violated the ban or person they believe may have aided or abetted a patient seeking an abortion after six weeks. That could include a friend or family member who lends a patient money or drives them to a clinic. S.B. 8 also allows individuals to sue those who “intend” to take action that might violate the law.

Although S.B. 8 is blatantly unconstitutional under current law, which protects the right to abortion up until fetal viability, the U.S. Supreme Court declined to intervene, allowing Texas’s ban to take effect last fall. The court’s decision to look the other way has unmoored states from adhering to the rule of law, prompting a host of copycat legislation, including Oklahoma’s latest and most extreme House Bill 4327.

Oklahoma’s ban goes further than Texas’s. Not only does it outlaw all abortion, but it also attempts to strip Oklahoma’s state courts from any jurisdiction to consider whether the law violates state constitutional protections. That’s important because the state’s constitution has been interpreted as granting wide privacy protections, and state courts have repeatedly blocked various abortion restrictions from taking effect.

The bill also contains an emergency clause that would allow it to take effect immediately, which would deliver a crushing blow to abortion access across the region. When S.B. 8 took effect last September, Texas patients flooded into Oklahoma and the surrounding states in search of care. That in turn has displaced home-state patients, delayed appointments, and forced more people to seek care farther from home. If Oklahoma lawmakers are successful in shutting down access altogether — even if only temporarily — the consequences will reverberate across the region’s increasingly stretched network of providers.

“Our government is not interested in keeping us safe or healthy. They are interested in surveilling and criminalizing our communities.”

Oklahoma lawmakers have long pushed the envelope in their efforts to legislate abortion out of existence. Just this year, they’ve passed three separate bans on abortion. In addition to H.B. 4327, lawmakers passed a ban in April that would criminalize abortion and subject providers to prison time. That measure, slated to take effect in August, contains an exception in the case of a medical emergency, defined in part as “a condition which cannot be remedied by delivery of the child.” Weeks later, lawmakers passed a six-week copycat ban, Senate Bill 1503, which also strips state courts of jurisdiction to consider legal challenges. The ban includes an exception for a medical emergency, but none for pregnancy resulting from rape or incest. (The newest ban, H.B. 4327, does include a rape or incest exception, but only if the assault has been reported to police.) Stitt readily signed the first two bills into law. The six-week ban took effect May 3.

During the April signing ceremony for the criminalization bill, Stitt was asked what Oklahoma could do to “deal with” all the Texans coming to the state in search of care. “You mean have Highway Patrol arrest the Texans that come across our border?” he joked as laughter broke out in the room. “This bill will take care of that. We certainly don’t want Texans coming up to Oklahoma.”

Dr. Iman Alsaden, medical director for Planned Parenthood Great Plains, which provides abortion services in Oklahoma, Arkansas, and Kansas, was anything but amused during the call after H.B. 4327 passed. “The fact that Oklahoma politicians are proud of passing today’s total abortion ban is an embarrassment to our state,” she said. “Today’s actions make clear that our government is not interested in keeping us safe or healthy. They are interested in surveilling and criminalizing our communities.”

“There is no aspect of what is happening with these abortion bans in Oklahoma that is normal. It is truly insane.”

Oklahoma’s passage of multiple bans has created confusion. In addition to the three passed this year, the state already had a trigger law on the books that would ban abortion if Roe is overturned. Two additional bans were passed in 2021, both of which are currently in litigation. The Oklahoma Supreme Court declined to block the six-week copycat law from taking immediate effect in May, but that measure is also the subject of pending litigation in the lower courts. When H.B. 4327 is signed, Muqaddam said, it will be added to the growing pile of legal challenges.

“The Oklahoma Legislature … repeatedly enacts overlapping laws in an insane way that makes no sense,” Muqaddam said. “There is no aspect of what is happening with these abortion bans in Oklahoma that is normal. It is truly insane.”

Which of Oklahoma’s bans might be the controlling law should the U.S. Supreme Court strike down Roe as expected remains to be seen. The situation has also confused patients, who have been calling clinics wondering if abortion is still legal. “It is,” said Emily Wales, interim president and CEO of Planned Parenthood Great Plains, “but it has never been more in danger.” Still, providers and advocates said they will continue to do everything possible to help patients navigate their way to care.

“There’s really no rhyme or reason” to how Oklahoma is proceeding, Muqaddam said, “other than a radical attempt to just confuse people, create chaos, and wreak as much havoc as they can possibly do on people who are seeking abortion and the providers who provide it.”