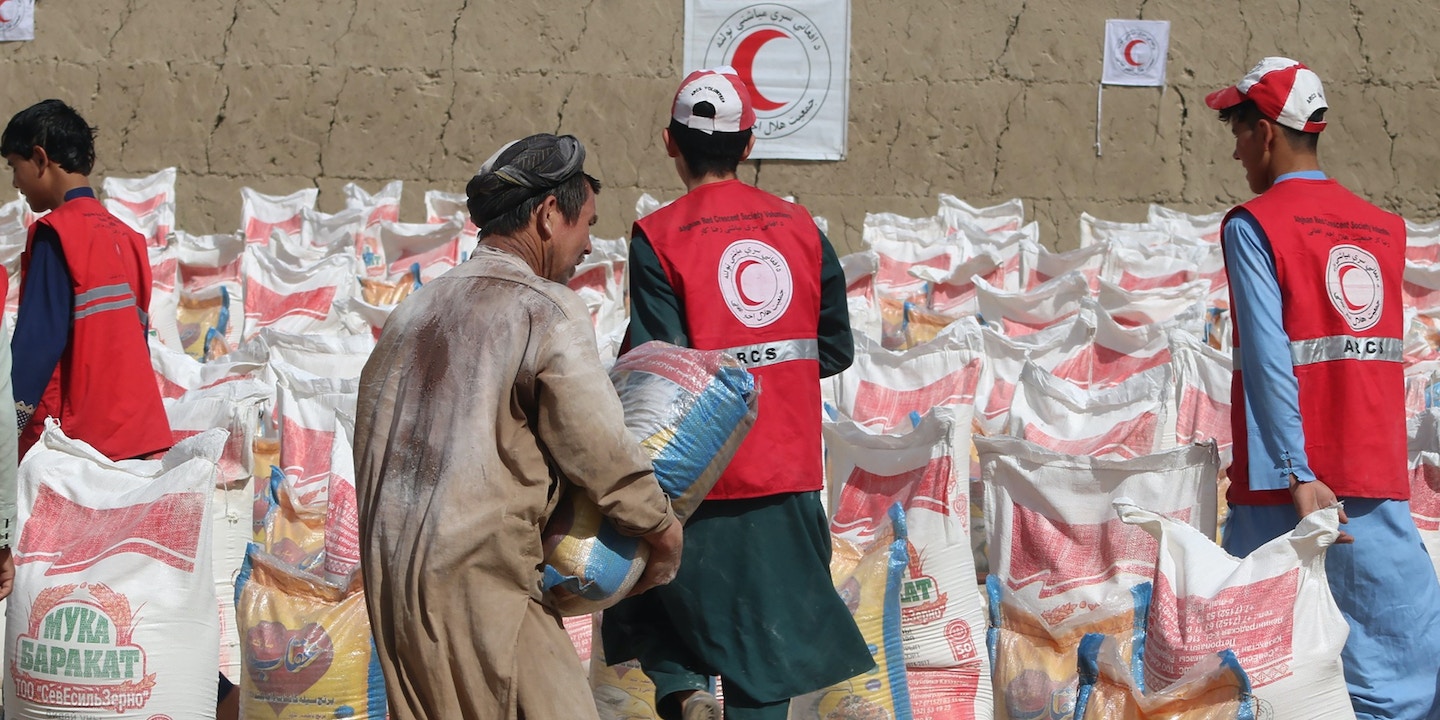 Amid a historic and ever-worsening humanitarian crisis in Afghanistan, Facebook recently added the head of one of the country’s most important domestic aid groups to its Dangerous Individuals terror blacklist, The Intercept has learned.

Internal company materials reviewed by The Intercept show that Matiul Haq Khalis — head of the Afghan Red Crescent Society, or ARCS; son of a famed mujahedeen commander, Mohammad Yunus Khalis; and a former Taliban negotiator — was added to the company’s stringent censorship list in late April, joining a group of thousands of people and organizations deemed too dangerous to freely discuss or use the platform, including alleged terrorists, hate groups, drug cartels, and mass murderers. But Facebook’s designation now means that the list, ostensibly created and enforced to stop offline harm, could disrupt the work of a globally recognized organization working to ease the immiseration of tens of millions of civilians.

After the collapse of the U.S.-backed government and withdrawal of American military forces, Khalis was named president of the organization, which helps provide health care, food, and other humanitarian aid to civilians there since its founding in 1934. In a country where half the population is going hungry and American sanctions threaten a total economic collapse, the ARCS is a bulwark against even greater suffering. Following Khalis’s addition to the Dangerous Individuals list under its most restrictive “Tier 1” category for terrorists due to his Taliban affiliation, the over 2 billion Facebook and Instagram users around the world are now barred from praising, supporting, or representing Khalis; this means even an anodyne photo of him at an official ARCS event, quotation of remarks, or positive mention of him in the context of the organization’s aid work would risk deletion, as would any attempt on his part to use the company’s platform to communicate, either in Afghanistan or abroad.

“The Afghan Red Crescent continues to provide lifesaving assistance across the country, to the most vulnerable people in the country, working in all provinces,” said Anita Dullard, spokesperson with the International Committee of the Red Cross. “They’re dealing with a range of things including severe drought, Covid, economic hardship, and working to support the healthcare system in Afghanistan. We work closely with Afghan Red Crescent to ensure that we can deliver humanitarian assistance.”

A senior official with a major international aid organization in Afghanistan, who spoke with The Intercept on the condition of anonymity due to avoid jeopardizing operations in the country, described ARCS as “one of the major humanitarian actors delivering services to a growing number of people in need” and “a huge contributor to the collective humanitarian efforts” pursued in conjunction with other NGOs. This aid official expressed surprise that Khalis would be singled out for censorship despite his Taliban affiliation, saying he had “never held a gun,” and expressed concern over the potential to impede lifesaving humanitarian work. “For sure the ARCS is using Facebook as a tool of communication” with the public, this source continued. “If [the blacklisting] has an effect it will be negative” for Afghanistan, they added. Khalis has had an “extremely varied career” in Afghanistan, according to Graeme Smith, an Afghanistan analyst at the International Crisis Group and former United Nations officer stationed in the country. Smith noted that Khalis was in recent history considered an ally of the U.S., having served with the anti-Soviet mujahedeen led by his father, who in 1987 was feted by President Ronald Reagan at a White House reception. Following the American invasion in 2001, Khalis sided with the Taliban. “In other words he’s from a prominent family with pedigree rooted in tribal support from eastern Afghanistan and a history of fighting invaders,” explained Smith. “I have spent the better part of my career studying Afghan politics and I have never met any important politician who is not ‘dangerous’ in some way. Afghans have learned through bitter experience that Western politicians are also dangerous, at times.”

Facebook’s designation of Khalis, considered in a vacuum, is unsurprising. The company’s Dangerous Organizations and Individuals roster generally mirrors the foreign policy stances of the United States, blacklisting federally sanctioned and terror-designated entities like the Taliban as a matter of course while granting great latitude to Western allies. In Afghanistan, Facebook’s near-total mimicry of State Department decision-making has meant that the ruling government of a sovereign country, as repressive of its own people and despised as it may still be in the U.S., is unable to freely use the internet to communicate with its citizenry. The U.S. government and Facebook share not only a common dilemma over how to treat the Taliban now that the group has won the war and assumed control of the country, but seem to be taking the same punitive approach to that matter. Just as the Biden administration continues to punish the Taliban at the expense of the people of Afghanistan by withholding billions of dollars in frozen cash, Facebook now sanctions the head of one of Afghanistan’s most important humanitarian organizations at a time when Afghans are selling their kidneys to avoid starvation. “It goes without saying that the Red Crescent plays a crucial humanitarian role in Afghanistan’s ongoing armed conflicts,” added Smith.

John Sifton, Asia advocacy director at Human Rights Watch, told The Intercept that he doubted the blacklisting would have a significant impact on relief efforts inside the country, given the relatively small scope of the ARCS compared to larger international organizations. “It’s not going to somehow significantly impact their operations or outreach,” he said. “It’s more illustrative of Facebook having a policy that doesn’t make a lot of sense.” Sifton questioned the extent to which letting people speak freely of Khalis would endanger anyone or anything. “How is he ‘dangerous’? He’s like 65 years old. He has no militia. His father was a mujahedeen commander, but what is the problem here?” Sifton pointed to groups that are actively using the platform to incite violence. “There are hate guys in India that are spreading toxic anti-Muslim violence across Facebook, Hindu nationalist groups, hateful Buddhist groups in Burma, that’s a real problem. Having Khalis online posting about how he cut the ribbon at a new hospital in Afghanistan, that’s not part of the problem.”

Facebook has at times defended the breadth of its blacklist by claiming, without evidence, that it’s legally required to censor discussion of certain entities in order to comply with U.S. sanctions law, though neither the ARCS nor Khalis are currently named in the Treasury or State Department’s counterterrorism sanctions lists. And although the Taliban has an inarguably ugly human rights record and a long history of civilian brutalization, so do many governments left untouched by the Dangerous Organizations policy. The Dangerous Organizations and Individuals list is often criticized for its lack of flexibility and country-specific nuance, and though the company has shown that it is at times willing to make drastic exceptions, these exceptions generally also jibe with American policy determinations.

“The fact that Twitter is doing the exact opposite tells you everything you need to know.”

While Sifton is critical of Facebook’s rigid censorship policies, he also assigns blame to “scattershot” and outdated federal anti-terror policies and dismissed the company’s claims that it has any legal obligation to mimic them: “The fact that Twitter is doing the exact opposite tells you everything you need to know.” Sifton said that by following the “absurdities” of counterterrorism sanctions lists, Facebook is replicating the government’s mistakes. While he emphasized that he was not defending the “misogynist, authoritarian, rights-abusing” Taliban, he questioned the notion that the aging mujahedeen of the 1980s still represent a “danger” to the global community. “The Taliban was dangerous because they hosted Al Qaeda between 1996 and 2001, and Al Qaeda used their territory to plan 9/11 … and all the guys who did that are dead, and all the Arabs they hosted are either dead or very old or at Guantánamo.” To the extent that the Taliban writ large represents a genuine danger to Afghan civilians, it’s unclear how restricting global discussion of Khalis might help.

Khalis was added to the social network’s blacklist alongside some two dozen other Taliban-affiliated individuals, including others in humanitarian or public health roles, like Afghanistan’s minister of public health, deputy minister of disaster management, and deputy minister of refugees. But unlike these latter offices, the ARCS is nongovernmental, part of the International Red Cross and Red Crescent Movement of humanitarian relief organizations.

In response to a request for comment, the International Federation of Red Cross and Red Crescent Societies provided a statement from ARCS Acting Secretary General Mohammad Nabi Burhan, stating that the Taliban government has not affected the group’s mission or ongoing work. “The Afghan Red Crescent Society delivers impartial, neutral and independent humanitarian services across all provinces in Afghanistan, in its role as auxiliary to public authorities in accordance with the Statutes of the International Red Cross and Red Crescent Movement,” he wrote. “Afghan Red Crescent Society has been operating under a new leadership since October 2021. It is not unusual for changes in leadership of a Red Cross or Red Crescent National Society to follow a change in leadership at a national level.”