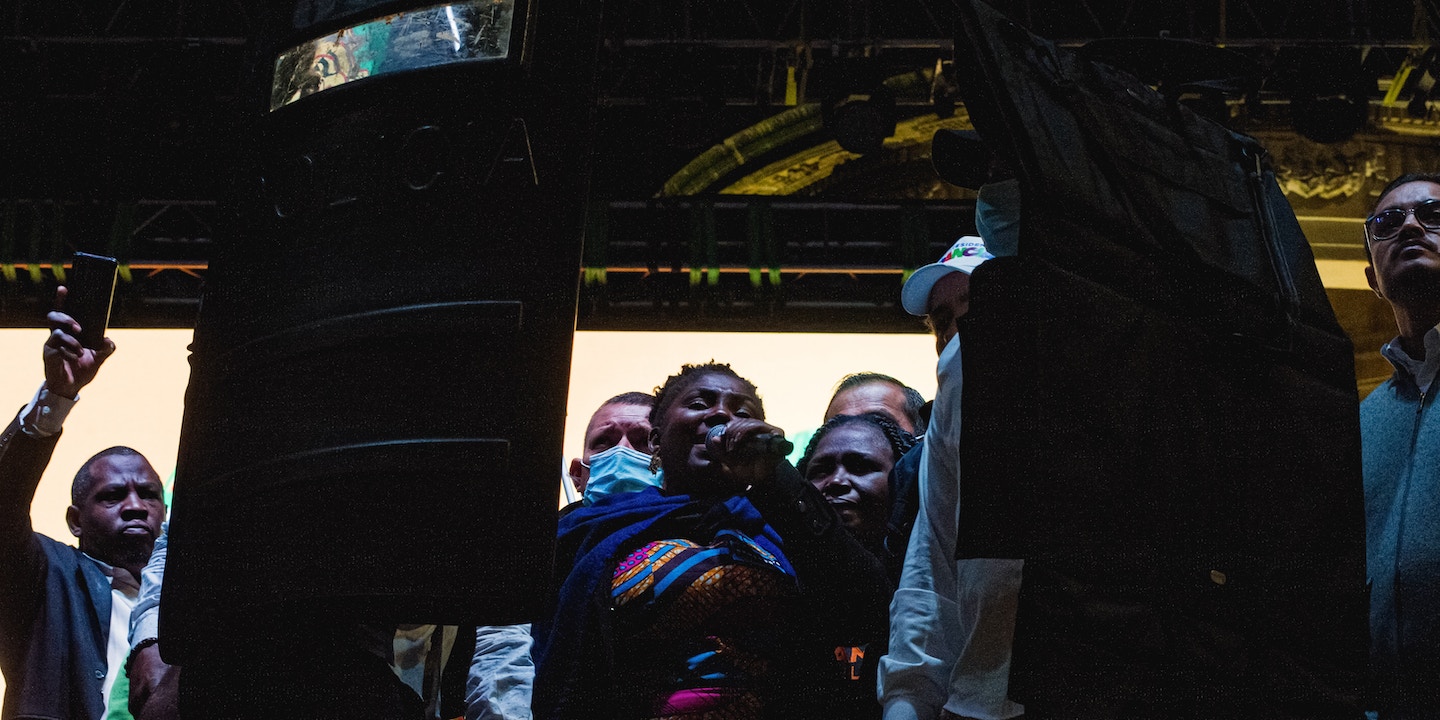 Francia Márquez Mina, a renowned environmental activist who may become Colombia’s first Black vice president, gave a speech Saturday night to celebrate Afro-Colombian Day. Appearing from a nearby building, green lasers beamed onto the stage while she spoke. As the lights flashed across Márquez’s body, two bodyguards with shields jumped in to cover the candidate, who kept talking. “They will not silence us!” Márquez later tweeted. “Our fight is and has always been against all kinds of violence that attempt to sow fear among us. Peace will triumph!”

On Monday, 90 political figures and entities from more than 20 countries released a letter condemning growing violence and persecution ahead of Colombia’s presidential elections, which begin on May 29. The Independent first reported their statement on Sunday.

“We, elected representatives and leaders from around the world, express our grave concern for the growing threat of violence, assassination, and intervention in Colombia’s presidential elections on 29 May,” they wrote. The signatories include U.S. Rep. Rashida Tlaib, D-Mich.; former Ecuadorian President Rafael Correa; and numerous legislators from South America’s Mercosur Parliament and the European Parliament.

In a particularly egregious threat, Petro’s security team uncovered a plan by paramilitary group La Cordillera to murder him, forcing the candidate to cancel a tour of Colombia’s coffee region earlier this month. Petro has pledged to tackle the country’s 40 percent poverty rate and shift the economy away from dependence on fossil fuels. He’s a current senator and former member of the April 19th Movement, or M-19: a guerrilla organization active from 1970 to 1990 that sought to promote democracy using revolutionary tactics — most famously by taking Supreme Court judges hostage during a siege at the Palace of Justice in Bogotá, and stealing Simón Bolívar’s sword from the city’s Bolívar House museum. Petro participated in peace talks leading to the group’s demobilization.

Petro and Mina have both survived assassination attempts in the past and continue to face many death threats, including from the Black Eagles, a murky far-right group widely believed to be affiliated with narcotrafficking. These threats pose a risk to “their lives and their right to political expression just days before the first round vote,” the world leaders state.

“Political violence is not contained to the candidates,” the signatories warn. “As of writing, more than 50 social leaders — including trade unionists, Indigenous and Afro-Colombian representatives, peasant movement organizers, and environmentalists — have been murdered this year in an attempt to intimidate and eliminate Colombia’s popular movements.”

And earlier this month, a narco-paramilitary group known as Gaitanista Self-Defense Forces of Colombia, or Clan del Golfo, launched an “armed strike” that killed dozens of people and brought much of the country’s economy to a halt. The attack was retaliation for the Duque government’s extradition of group leader and drug trafficker Dairo Antonio Úsuga to the United States. The violence has “endangered the democratic process,” according to the letter.

The country’s democracy is also under threat as a result of efforts to oust elected officials from their positions, “raising concerns about the possibility of targeted lawfare,” they argue. Earlier this month, the Colombian government’s head prosecutor suspended Daniel Quintero Calle, the mayor of Medellín, after he tweeted a video pushing the gear lever of a car with the hashtag #ElCambioEnPrimera: “Change in First,” a popular slogan for the Petro-Márquez ticket. Colombian Inspector General Margarita Cabello, whose powers were expanded last year with Duque’s support, characterized the tweet as violating the country’s law banning public officials from participating in elections.

Petro — who ran for president in 2010 and again, against Duque, in 2018 — referred to the decision as a “coup d’état” motivated by Cabello’s allegiance to Federico Gutiérrez, the leading right-wing contender and Duque’s preferred candidate. In 2014, former inspector general Alejandro Ordóñez forced Petro to vacate his former position as the mayor of Bogotá, a move the U.S.-based Inter-American Commission on Human Rights later ruled had violated the region’s human rights charter. (Then-President Juan Manuel Santos nevertheless drove Petro out of office).

“Democracy is at risk,” Quintero tweeted after Cabello’s announcement. “They want to remove us from office to intervene in the presidential elections.”

“Together, these threats call for greater vigilance, scrutiny, and transparency in Colombia’s presidential elections,” the political figures wrote in Monday’s statement. “For decades, the people of Colombia have demanded peace and dignity. We write now in solidarity with their struggle for a free and peaceful democratic process.”