Life in America’s Culture of Ultraviolence

“I hated having the power to kill someone,” my father once told me about carrying a gun. But many, many Americans seem to love it. 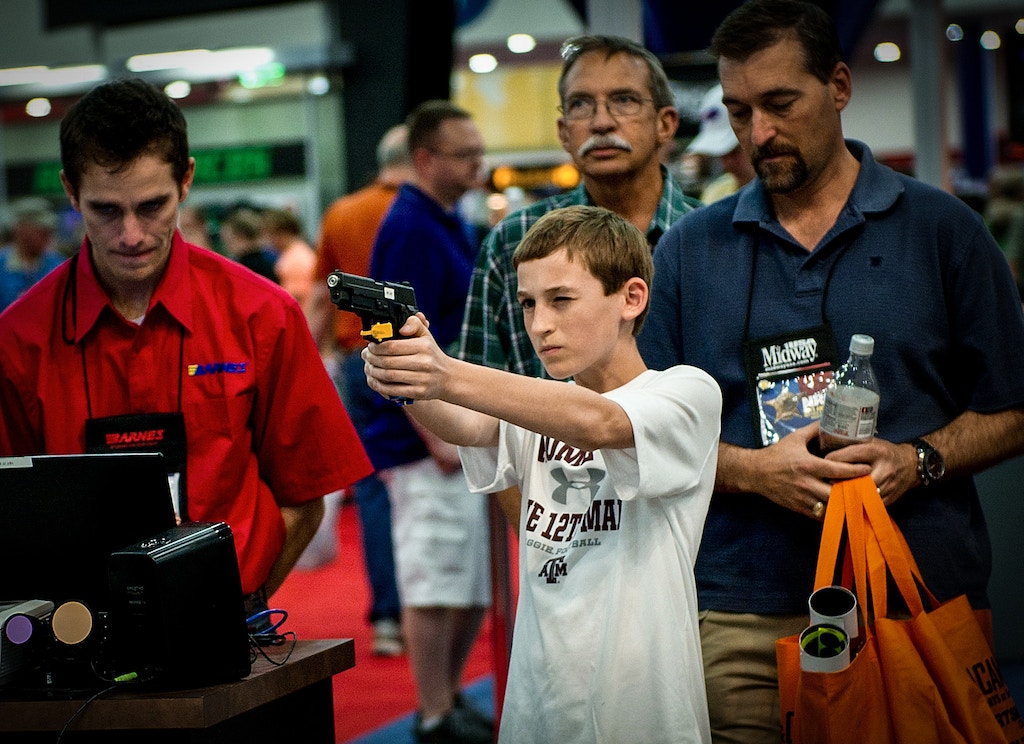 A child aims a handgun using a computer simulator during the 142nd annual National Rifle Association convention on May 4, 2013, in Houston.

When I was 6 years old, I learned from my mother that my father had sometimes carried a gun. When he was a lieutenant in the Army, she told me, he would be “officer of the day” once a month. Usually soldiers didn’t walk around base armed, but when he was officer of the day, he was responsible for patrolling the barracks and had to carry a loaded revolver.

This thrilled me in a way that nothing had thrilled me before in my brief life. I already knew from watching TV that guns were tremendously exciting. Good men of various genres shot bad men of different types. The world was full of problems, and guns were always the electrifying solution, banishing wrongdoing from the universe one squib at a time. And now it turned out Dad had possessed one of these devices of glorious power.

I rushed to find him so I could learn the details. I located him in his basement office, where he did something that involved several concepts I was unclear about: Apparently he had homework (?) from his job (??), which was math (???). I stood on the threshold, my head full of so many questions there was a traffic jam at my mouth. Finally I got some of them out: Was it true? He used to have a gun? Was it as amazing as I believed, or even more so? I was already calculating which friends to tell first about my father and guns.

An expression passed across his face that I’d never seen before. He looked pained in some profound way.

Yes, he told me. He’d carried a gun when he was officer of the day. He always dreaded it as the time approached on the calendar. He looked at me and said: “I hated having the power to kill someone.”

My boisterous enthusiasm suddenly halted, as though I’d run into a brick wall at 200 miles an hour. On the one hand, there was my fervid imagination about the world. On the other hand, there was Dad. Much to consider.

I’ve been considering this ever since. I considered it when I later learned that my father had once been firing a machine gun on the Army range and it exploded. There were two codified ways to fire a machine gun, he said: lying down or sitting cross-legged. He’d been lying down, and the shrapnel passed directly over him, where his face would have been if he’d been sitting up. Then the Army tried to charge him for the cost of the machine gun.

I considered it the summer after my sophomore year of high school, when two of my classmates went to the beach in Delaware with their families. One was my neighbor from the next street over; the other was his best friend. My neighbor found a gun in his brother’s suitcase. As he and his best friend examined it, my neighbor accidentally shot and killed his friend. My neighbor was so distraught that he himself had to be taken to the hospital and sedated.

I considered it when I was walking home at 6 a.m. through a steamy New York City August morning after an unsuccessful date, covered in blue face makeup. (It’s a long story.) As I passed a guy on the street, he yelled “Watch out, bluey!” and whipped a grape at my head. I turned around and advanced toward him through the garbage-scented air, as every cell in my body shrieked at me to exact revenge. He put his hand in his jacket as though reaching for a gun. It took everything my cerebrum had to tell my cells to stand down and retreat. A boy plays with a machine gun during a graduation ceremony for Rangers at Eglin Air Force Base in western Florida on Jan. 27, 2006.

All this considering has led me to several extremely unpleasant conclusions. First, there is no escape from America’s culture of guns and ultraviolence. I’ve consciously tried to stay as far away from it as possible. But it has touched my life glancingly all the same and could do so again more directly at any moment, just as it may touch yours.

Second, there is something in a boy that loves a gun. America’s adoration of these death machines exists thanks to decades of cultivation and accentuation of an aspect of human nature, but it did not create it. After the school shooting in Texas, I called my friend Robert ToTeras, a film and TV composer in Los Angeles with two children. He told me that when he heard about it, he asked his wife to come into his home studio, “and I just started bawling.”

America has changed during my lifetime, and it is never changing back.

But he and I have discussed for years that guns radiate some kind of fatal beauty, and you can’t be honest about this if you don’t acknowledge it. Robert himself used to go to a shooting range for pure recreation, until he stopped when he became disturbed by gun culture and its political exploitation by the right. With musical instruments, he points out, “something in your body connects with them, they just scream — pick me up and use me in the way that I’m intended to be used.” The same thing, he says, is true of guns: “It’s the way it’s shaped for your hand. It’s just naturally alluring.”

Third, America has changed during my lifetime, and it is never changing back. When my father told me about carrying a gun, it would never have occurred to him in a million years that 6-year-old me might head off to school one day and never return. Now, “I know I can’t protect my children from something like this,” says Robert. “I can’t protect my family.”

The great reporter William Greider made a dark prediction 30 years ago in his 1992 book “Who Will Tell the People.” Greider believed that progressive, democratic politics were necessary to keep the U.S. from falling to pieces. “The nation’s sense of its own continuing search for something better is endangered,” he wrote, “and, without that civic faith, this nation is in deep trouble. If democratic character is lost, America has the potential to deteriorate into a rather brutish place, ruled by naked power and random social aggression.” That had always been true for many Americans, of course. But Greider saw the future, and now the entrenchment of minority rule has made it true for everyone.