“Reconciliation clearly can be used for anti-gun violence programming,” Murphy said. “And Senator Manchin … cares deeply about the issue of gun violence.” 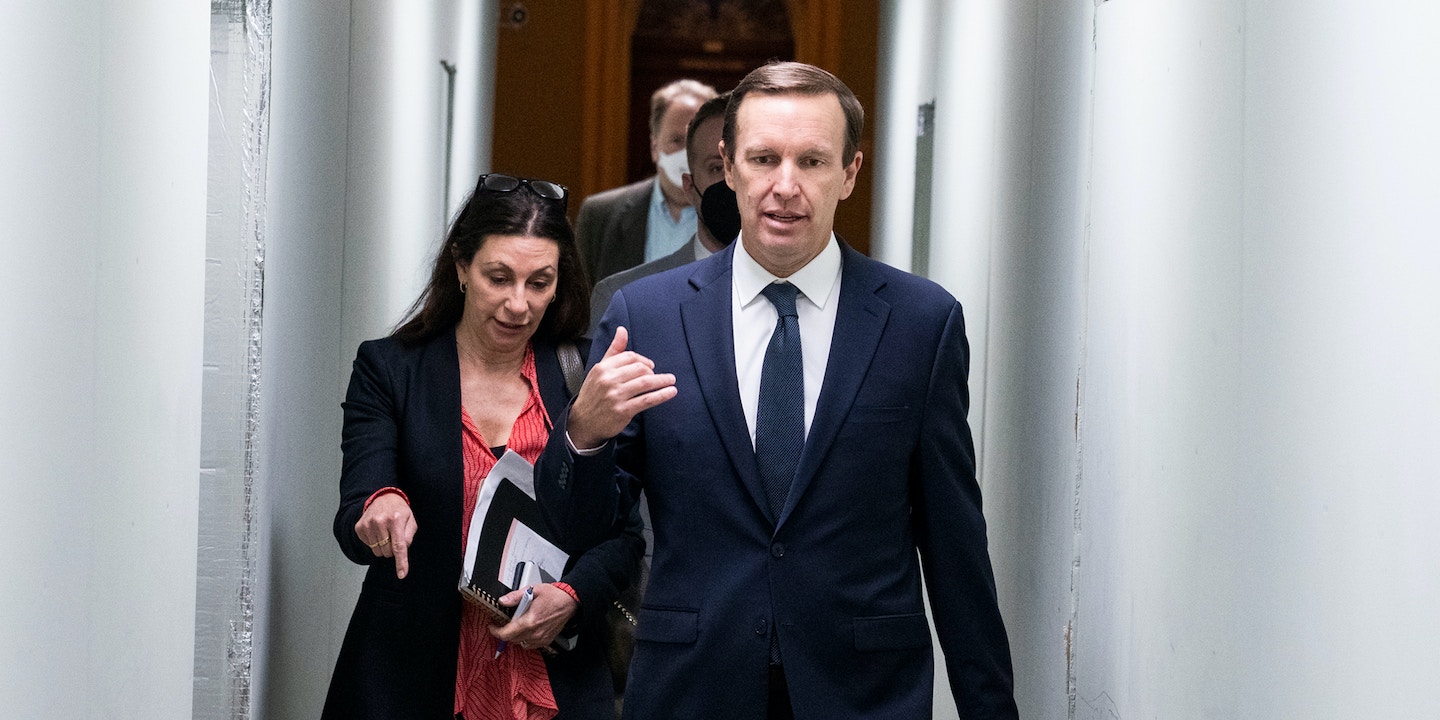 On Tuesday, as news emerged of more and more elementary school children killed in a mass shooting in Uvalde, Texas, Sen. Joe Manchin, D-W.Va., said he would do “anything I can” to prevent it from happening again. Anything, that is, except reforming the filibuster. “The filibuster is the only thing that prevents us from total insanity. Total insanity,” he said, immediately deflating any hope for comprehensive gun reform.

But while Manchin has ruled out altering the filibuster rule to allow an up-or-down vote on gun-related legislation, some elements of gun violence prevention agenda would be eligible to move through the upper chamber under the rules of budget reconciliation, which only requires a simple majority vote.

Among those projects, Sen. Chris Murphy, D-Conn., told The Intercept, are community-based programs that aim to interrupt potentially violent situations before they spiral out of control. And though the media focuses on tightening gun laws, Murphy said, communities wracked by violence are often more likely to speak out on behalf of such community-based interventions. Murphy represented Newtown, Connecticut, in Congress at the time of the shooting at Sandy Hook Elementary School that killed 20 children.

“The president’s original proposal had significant funding in it for $5 billion for anti-gun-violence initiatives, for community-based anti-violence programming,” Murphy noted to The Intercept. “Frankly when you spend time in places like the east side of Bridgeport or north end of Hartford [in Connecticut], that’s what people are looking for. They want tougher gun laws but they also want help reaching out and doing outreach to at-risk kids.”

Murphy said that the budget impacts of the program would make it plainly eligible for reconciliation. “Reconciliation clearly can be used for anti-gun violence programming,” he said. “And Senator Manchin, who is the key negotiator on the reconciliation package, cares deeply about the issue of gun violence. So I would hope that he would look favorably upon including some investments in gun violence.” Back in 2013, following Sandy Hook, Manchin co-sponsored an amendment with Sen. Pat Toomey, R-Pa., that would have required background checks, a measure that had 90 percent approval among Americans. The amendment was rejected 54-46 in the Senate.

The type of programs Murphy is referring to aren’t flashy, but, he noted, they tend to have bipartisan support. But there is serious evidence that community-based interventions, if adequately funded, can be both life-changing and lifesaving. And they are endorsed by prominent gun safety groups. “The Biden-Harris administration understands that in order to build back better, we need to build up community-based programs designed to stop the shootings before they start,” said John Feinblatt, president of Everytown for Gun Safety, in a statement in November.

These programs seek to deter gun violence by identifying and intervening in the lives of people — mostly young men — who are at highest risk. Richmond, California, a blue-collar industrial town outside of San Francisco, is well known within the community policing world for its success in pioneering programs that radically brought down the gun homicide rate and reduced the use of deadly force by police officers.

In 2007, under the leadership of Green Party officials, the city set up the Office of Neighborhood Safety. The office, staffed largely by ex-convicts, worked closely with police, faith-based organizations, local businesses, and community groups to find men most at risk of committing violent crime, and provide them with mentoring, job training, and eventually, monthly cash stipends. In addition to stipends, ONS sponsors group trips to other major cities and to Mexico and South Africa. Rival gang members are paired together to see one another as human beings.

In tandem with ONS, Richmond reformed its police department with new deescalation training seminars and a push to integrate officers into everyday community events and organizations. The program appears to have had significant success. Six years after its launch, in 2013, Richmond had 16 homicides, which the Christian Science Monitor noted was the lowest number in 33 years for the city. Police violence also plummeted. The use of deadly force in Richmond was far lower than neighboring Oakland and San Pablo.

Senate Budget Committee Chair Bernie Sanders, I-Vt., said that reconciliation was an available option for gun violence legislation. “Anything can be done through reconciliation, within reason. You have to deal with the parliamentarian and legalisms and so forth and so on. But it just seems to me that, given what’s going on in this country, we should use every tool available to pass the most serious gun safety legislation that we can. And we don’t have 60 votes,” he said.

Sen. Tim Kaine, D-Va., said that negotiators previously explored reconciliation for wide swaths of the gun safety agenda but concluded that much of it would be ruled out of order by the parliamentarian.

The Senate’s reconciliation bill known as Build Back Better was spiked several months ago by Manchin, but is being revived in a pared-down form that focuses on using government buying power to drive down drug prices, rolling back some of the Trump tax cuts on the super rich, energy and climate subsidies, and deficit reduction.

Sen. Tammy Duckworth, D-Ill., said earlier this week a handshake deal was possible by Monday, and Manchin, speaking from Davos, allowed that it was still alive. “I believe there’s an opportunity, a responsibility, an opportunity that we can do something,” he said.

Democratic Sens. Mark Kelly, Raphael Warnock, and Jeanne Shaheen — up for reelection in Arizona, Georgia, and New Hampshire, respectively — each told The Intercept today they were hopeful that reconciliation would get back on track in order to pass drug pricing legislation before their competitive midterms. “As I travel around Arizona and meet with seniors, prescription drugs are so expensive. We should look for every opportunity to try to bring down the cost, whether it’s prescription drugs, energy, child care, other things. So we’re discussing multiple avenues for doing that,” Kelly said. “I’m always optimistic. Almost always.”