New negotiations would extend Trump’s legacy in the Middle East with a fresh Abraham Accords. 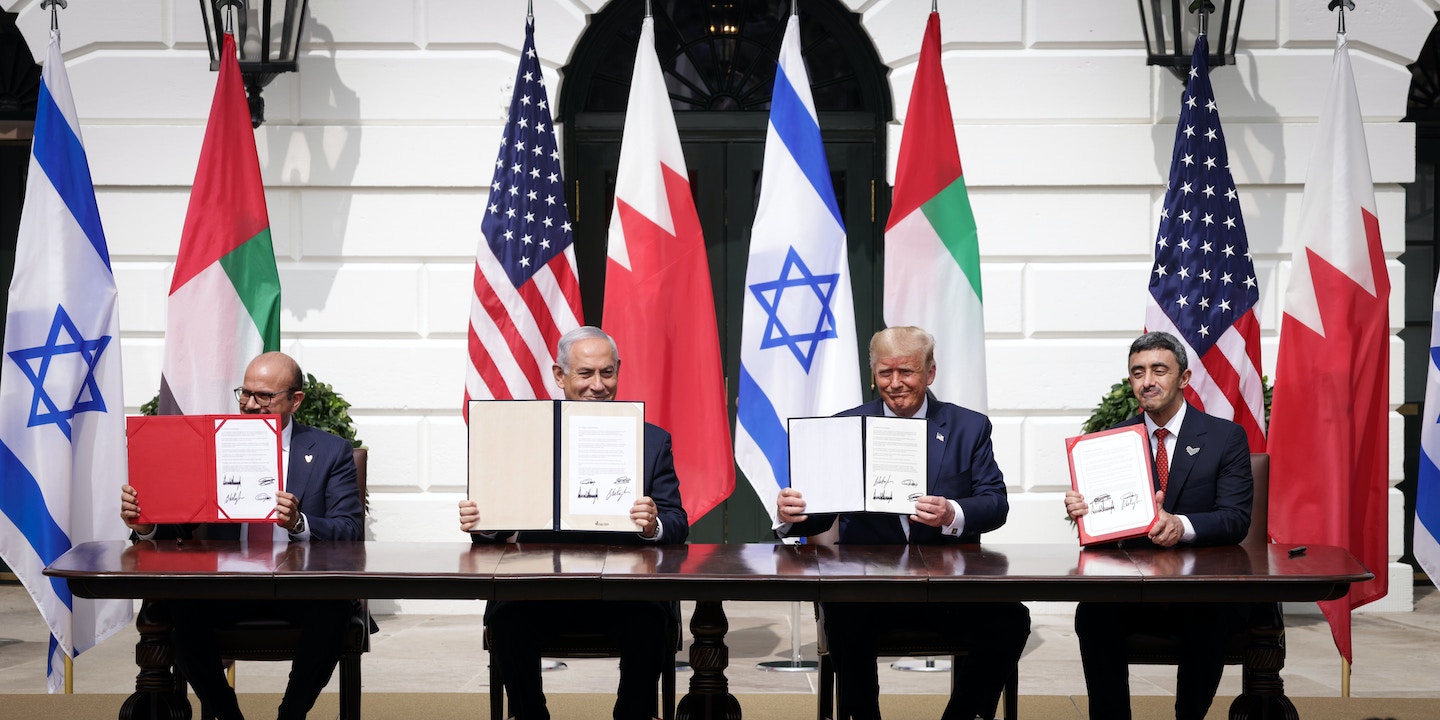 For decades, achieving a Middle East peace agreement — especially one equitable to the Palestinians — has eluded every U.S. administration, with each decade seeming to push it further from reality.

The Trump administration’s solution, spearheaded by Donald Trump’s senior adviser and son-in-law Jared Kushner, was to cut the Palestinians out of the question and organize a deal between Israel and its Arab neighbors around financial, military, and surveillance technology cooperation. The Abraham Accords were signed on September 15, 2020.

Kushner’s depiction of the plan was blunt. “One of the reasons the Arab-Israeli conflict persisted for so long was the myth that it could be solved only after Israel and the Palestinians resolved their differences,” Kushner wrote last year. “That was never true. The Abraham Accords exposed the conflict as nothing more than a real-estate dispute between Israelis and Palestinians that need not hold up Israel’s relations with the broader Arab world.”

That cooperation has continued, as Saudi Crown Prince Mohammed bin Salman has given Kushner’s investment fund some $2 billion and greenlit the financing of Israeli projects with it. Now, the Biden administration is moving swiftly to cement and extend Kushner’s deal, another nail in the coffin of Joe Biden’s campaign trail promise to make MBS a “pariah” due to his role in the murder of journalist Jamal Khashoggi.

Earlier this week, Axios reported that the U.S. was mediating negotiations between the Saudis, Israelis, and Egyptians for normalization of relations, following a secret meeting by CIA Director William Burns with MBS in April. The deal would hinge on the transfer of two Egyptian islands to Saudi sovereignty, a controversial course of action that in the past has drawn large protests from Egyptians. And, pressured by rising gas prices, Biden reportedly plans to meet with MBS later this year.

In another indication of the changing tides, the National Security Council convened a Deputies Committee meeting involving senior administration officials last week to discuss U.S. policy toward the Middle East, according to a U.S. intelligence office and a source close to the administration who required anonymity to talk about sensitive matters. (The NSC did not respond to a request for comment.) After that meeting, a source close to the administration expressed frustration at the lack of focus on human rights within that policy discussion.

While advocates of the Trump administration deal described the post-Abraham Accord framework as a peace agreement, experts warn that it only makes peace among authoritarian rulers, not with the general Arab public, for whom normalization of relations between Saudi Arabia and Israel absent meaningful rights for Palestinians remains intensely unpopular. Sarah Leah Whitson, executive director of Democracy in the Arab World Now, told The Intercept, “Normalization? What’s that looking like? An apartheid government signing a deal with unelected tyrants in the region? What kind of normal is that?”

In a region dominated by unelected autocrats, the will of ordinary residents is often disregarded. “The standing assessment is that the Saudi population does not support, but they do not have a voice,” the U.S. intelligence official said.

The meeting is one of several recent signs of quiet plans by the Biden administration to normalize relations with Middle East authoritarians in a regional grand bargain that extends Trump’s Abraham Accords. Last week, Saudi deputy defense minister Khalid bin Salman — brother of the crown prince — and Israeli defense minister Benny Gantz were in Washington, prompting speculation that the two had met. During a press briefing Thursday, Pentagon press secretary John Kirby said that “whether they’re meeting on the sidelines because they’re both in D.C. at the same time, I think you’d have to talk to either one of them.”

Given the unpopularity of these sorts of normalization schemes, one way to entice regional leaders is with promises of U.S. security guarantees — agreements by which the U.S. is required to provide a military response to attacks against regional partners enemies, like when the Houthis fired ballistic missiles at the United Arab Emirates earlier this year. But experts warn that such agreements will inflame regional tensions and make war more likely, particularly with Iran.

“The critical question is what’s in it for the United States?” said Trita Parsi, executive vice president of the Quincy Institute for Responsible Statecraft, in an interview. If security guarantees came to pass, it would “significantly increase the risk of America getting dragged into war. It also increases the recklessness of America’s partners in the Middle East. They’re disincentivized from seeking reasonable diplomatic solutions and incentivized to pursue reckless policies with the impression that the United States will fix it for them at the end of the day.”