Proponents have passed similar bills before, but this time they’ll have to contend with a White House striving to rekindle relations with Saudi Arabia. 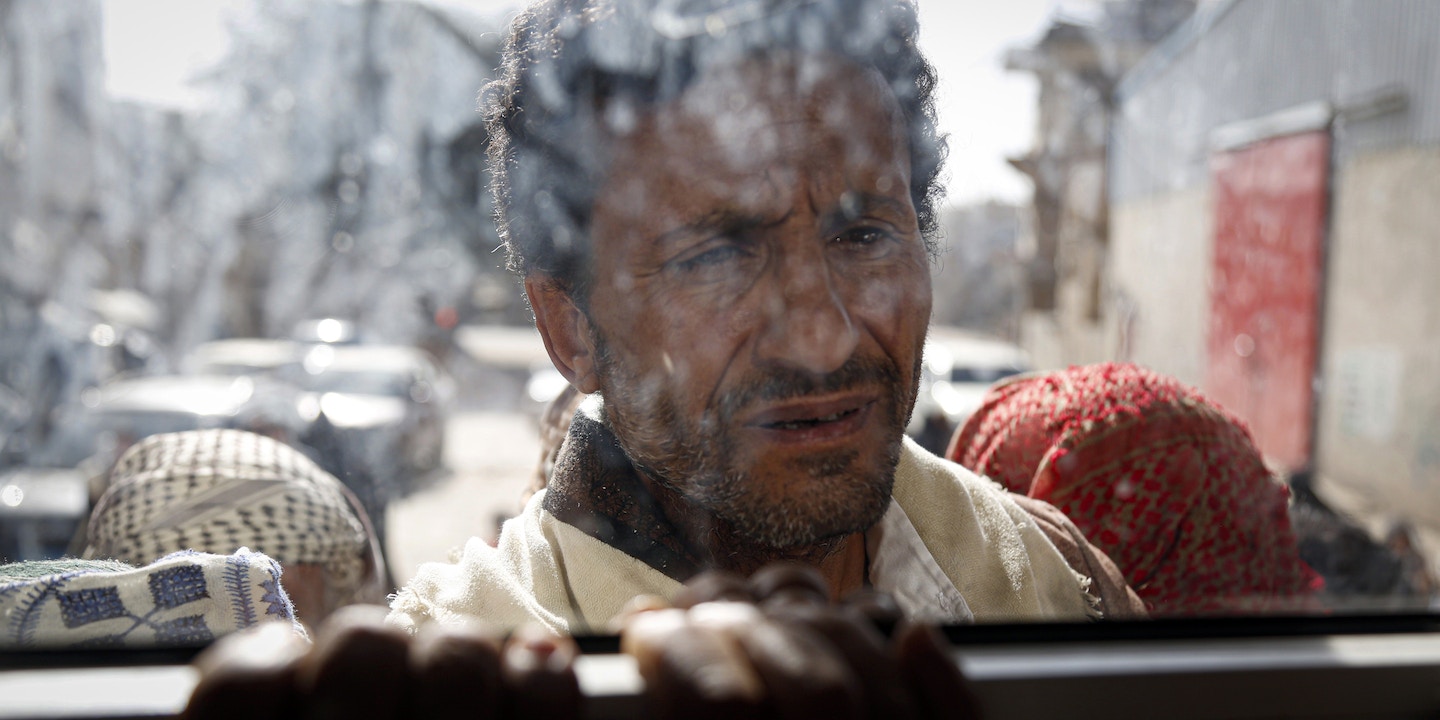 More than seven years have passed since Yemen’s Houthi rebels leveraged popular frustration over fuel prices to oust the government of President Abdrabbuh Mansur Hadi. That was a troubling development for Saudi Arabia, which had allied with the overthrown leadership to secure access to a key oil shipping lane off Yemen’s coast. The prospect that a movement purportedly backed by regional foe Iran would control this waterway was unconscionable, so the oil kingdom convened an international coalition, under the leadership of then-Saudi Defense Minister Mohammed bin Salman, now the crown prince, that could suffocate the insurgents. With the support of the United States, Saudi Arabia established a devastating port blockade that slashed the flow of commercial and humanitarian goods into Yemen and littered the country with bombs that have killed countless civilians.

During the Trump administration, some Democrats, joined by a handful of Republicans, fought to end the U.S. bomb sales, intelligence support, and warplane refueling that made the Saudi intervention possible. But with a Riyadh-friendly president in the White House, their efforts never had a plausible chance of actually forcing the kingdom to withdraw. Democrats at the time didn’t bear responsibility for managing relations with a major weapons customer and oil producer that helped keep gas prices low at home. In early 2019, when majorities in both the House of Representatives and Senate for the first time in history invoked the 1973 War Powers Resolution to end U.S. involvement, Saudi Arabia could rely on former President Donald Trump’s veto.

So the war dragged on. President Joe Biden adjusted U.S. policy when he entered office by demanding an end to “offensive” support, but this didn’t have a material impact for Yemenis trapped by the blockade and Saudi air raids supporting it. In November, the United Nations estimated that 377,000 Yemenis would be dead by the end of 2021, 70 percent of whom would be children, many as a result of starvation and disease. According to the World Food Programme, more than 17 million Yemenis are battling food insecurity, and that figure is expected to rise to 19 million, or nearly one-third of the population, by December 2022. Two months ago, the U.N. brokered a cease-fire between Saudi Arabia and the Houthis that gave the population some respite, but it’s scheduled to end this week. Numerous aid groups are calling for an extension.

With the deadline looming, Rep. Peter DeFazio, D-Ore., co-founder of the Congressional Progressive Caucus, introduced a new resolution on May 31 invoking the 1973 War Powers Resolution to demand that Biden end U.S. military participation in the Yemen war. According to a press release from the CPC, Sen. Bernie Sanders, I-Vt., will introduce a companion resolution when the Senate is back in session.

“It’s particularly timely now because the truce between the Saudi-led forces and the Houthi-led forces expires on the 2nd of June and we don’t know exactly what will occur — it could be renewed — and we’re hoping that this will be a little prod toward renewal,” DeFazio told The Intercept in an interview.

“It’s essentially a proxy war between Iran and Saudi Arabia unfortunately being carried out in Yemen and leading to hundreds of thousands of civilian deaths in Yemen and a huge humanitarian and ongoing humanitarian crisis,” he added. “This cease-fire has given some temporary relief, and I would hope it would continue.”

And the resolution has the endorsement of more than 100 organizations, including the Friends Committee on National Legislation, Demand Progress, and Just Foreign Policy, which are urging members of Congress this week to support it. “This is more essential than ever to maintain momentum for the fragile two-month truce and to prevent backsliding by blocking U.S. support for any renewed hostilities,” their letter, shared with The Intercept, says.

“Congress has a historic opportunity to end crucial U.S. engagement in the Saudi-UAE-led coalition’s deadly and inhumane war against Yemen, and reclaim their Constitutional jurisdiction over war,” Cavan Kharrazian, foreign policy campaigner at Demand Progress, wrote in a statement. A man stands amidst the rubble of a building, destroyed during years of fighting, in Yemen’s rebel-besieged third city of Taez, on May 20, 2022.

While proponents now have more of a Saudi skeptic in the White House than during their previous attempt at invoking the War Powers Resolution three years ago, passing the resolution again today may be a heavier political lift. U.S. relations with Saudi Arabia are at a crossroads: After initially promising to isolate the crown prince, Biden is now trying to curry favor with him.

In 2019, invigorated Democrats rode on their newfound control of the House to challenge the Trump administration, whose unapologetic allegiance to Saudi Arabia infuriated members of both parties. Trump had come to Crown Prince Mohammed’s defense after the murder and dismemberment of journalist Jamal Khashoggi in October 2018, just a few months after Saudi Arabia bombed a school bus in Yemen, killing at least 26 children. In November 2018, the White House relented somewhat by agreeing to no longer refuel Saudi coalition warplanes — Riyadh said it did not need U.S. support anyway — but Washington still supplied weapons, logistical support, and intelligence that allowed the war to continue.

Biden looked to make a change, pledging on the presidential campaign trail to make Saudi Arabia a “pariah” and removing the Houthis from the State Department’s terrorist list upon entering the White House.

“This war has to end,” Biden said in his first foreign policy speech as president, in February 2021. “And to underscore our commitment, we are ending all American support for offensive operations in the war in Yemen, including relevant arms sales.” The White House put a halt on hundreds of millions of dollars’ worth of bomb sales but has still enabled U.S. maintenance of Saudi warplanes conducting airstrikes in Yemen. Biden also did not demand an immediate end to port blockades.

Although the White House allowed Saudi Arabia’s war to continue, Riyadh has strong-armed Washington by refusing to increase oil production, driving gas prices in the U.S. to record highs, with frustrated voters set to cast ballots in this year’s midterm elections. Facing low approval ratings at home, in part a result of higher energy costs, the White House is now trying to rekindle the relationship and even discussing an extension of Trump’s Abraham Accords to Saudi Arabia. Passage of a new resolution to end U.S. military involvement in the Yemen war may upset those efforts.

And some Democrats’ positions have softened over the years. Sen. Chris Murphy, D-Conn., once one of the Senate’s strongest advocates for ceasing U.S. participation, voted in favor of a $650 million missile sale to Saudi Arabia in December. The State Department claimed that the weapon was “defensive.” And House Armed Services Committee Chair Adam Smith, D-Wash., an original co-sponsor of the 2019 resolution invoking the War Powers Resolution, is not an original co-sponsor now. Smith told The Intercept last month that he was undecided on whether to back it, wanting to review the final language and speak with the White House first. “I think the Biden administration is really committed to putting pressure on all sides,” he said.

Some lawmakers may hesitate because this year’s bill goes much further to cease U.S. military support than the 2019 version. Then, the bill narrowly focused on ending midair refueling of Saudi warplanes and included an amendment, offered by Buck, the Republican representative from Colorado, clarifying that intelligence sharing may continue. The new resolution would forbid logistical and maintenance support for warplanes bombing Houthi targets, coordination with Saudi-led military forces fighting the Houthis, and intelligence sharing. The expanded bill has Buck’s support, but it has lost many original co-sponsors; in 2019, the resolution had about 70 original co-sponsors in the House, including House Majority Leader Steny Hoyer, D-Md., who is not on the list today.

Hassan El-Tayyab, legislative director for Middle East policy at the Friends Committee on National Legislation, acknowledged the challenges ahead. “FCNL and our allies, on and off the Hill, are ready for a more difficult political fight on the Yemen War Powers Resolution this time around. In 2019, Democrats were eager to push back against President Trump. Now, many are hoping President Biden normalizes relations with Saudi Arabia to lower energy costs,” he told The Intercept.

“As Biden is preparing to head to the region to potentially formalize a security arrangement with Saudi Arabia, this War Powers Resolution sends a strong signal from Congress that any agreement with the kingdom needs to include ending war in Yemen,” he added. “By reasserting its Article I war authority, Congress can help extend the temporary Yemen truce into a lasting peace settlement and finally bring this devastating humanitarian crisis to an end.”