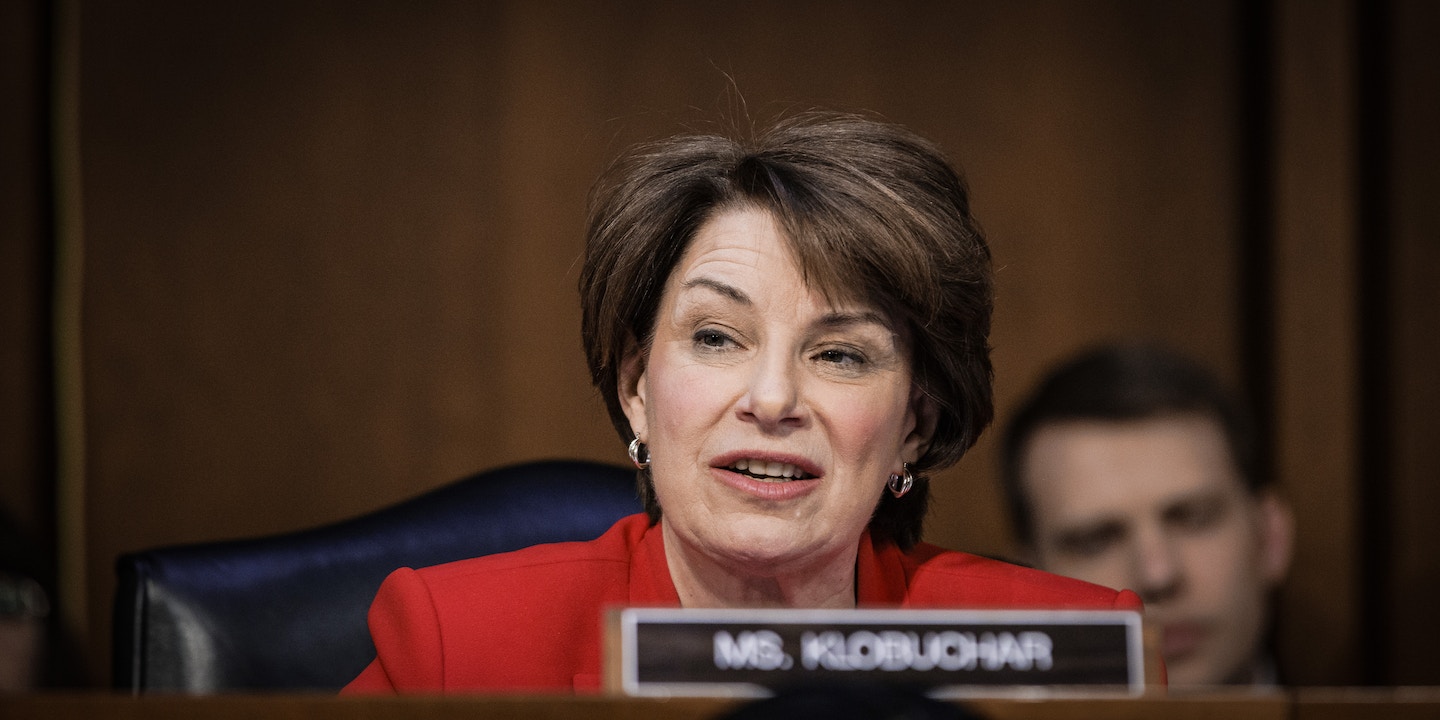 As U.S. consumers struggle with soaring prices and supply shortages, the highly concentrated industry that delivers their goods from overseas is making extraordinary profits — an expected record-breaking $300 billion in 2022, according to British market research firm Drewry. While an emboldened Federal Reserve is willing to risk a crushing recession to bring down prices — and Democrats have offered little resistance to interest rate hikes — Congress is turning to an alternative solution too little seen: passing and enacting legislation.

Next week, the House is set to hold a final vote on a popular bipartisan measure to ease pressure on the clogged global supply chains and seaports that are contributing to higher prices. The Ocean Shipping Reform Act will crack down on shipping companies currently exploiting their market power to raise fees, deny transport for exporters, and turn record profits in the process.

Reps. John Garamendi, D-Calif., and Dusty Johnson, R-S.D., have been working with Sens. Amy Klobuchar, D-Minn., and John Thune, R-S.D., for months to reconcile the different approaches to reform the legislators introduced in their respective chambers. With an agreement finally in place, the impending vote tees the bill up to go to the White House for President Joe Biden’s signature, Garamendi, who first sponsored the House version, told The Intercept.

Neither piece of legislation goes all the way to overturn the antitrust immunity that has emboldened shipping companies, nor does either bring the hammer down on the consolidated agriculture industry that’s hoping to reduce its shipping costs. But Garamendi’s bill is stronger, and it has already overwhelmingly passed the chamber multiple times over the past year, both as a stand-alone and as an amendment to larger pieces of legislation. Klobuchar and Thune’s measure, a watered-down version that’s more tolerable for the shipping industry, passed the Senate unanimously in March. It was ultimately the latter measure that prevailed in reconciliation discussions and will arrive on the House floor next week.

Speaking to The Intercept, Garamendi downplayed the differences between the two. “We worked with Sen. Klobuchar from the very moment she decided she wanted to work on this issue … to fashion a Senate bill that was as robust and informative of the power that the FMC [Federal Maritime Commission] needed to have,” he said.

The main distinction is that the House version outright forbids shipping companies from refusing to transport agricultural exports overseas, while the Senate version hands off regulatory decisions to the Federal Maritime Commission. Carriers have notoriously turned down farmers and producers, leaving American ports empty-handed in order to pick up more profitable Chinese products. The World Shipping Council, the industry’s primary trade group, has criticized both measures but posted on its website that the Senate version “provides regulators enough authority to get the final rules right.”

Garamendi said he doesn’t expect the Federal Maritime Commission to be lenient. “The Klobuchar bill gives the FMC the power and the authority and the responsibility to write those regulations, and also, in the debate of the bill — that is, the processing and the floor debate — it will be clear that the purpose is that there be a reciprocal trade program in place,” he said. “We take imports, and they take our exports.”

The measure’s advocates also have the support of Biden, who used his State of the Union address earlier this year to announce a “crackdown” on ocean carriers “overcharging American businesses and consumers.” In February, his administration facilitated an agreement between the Federal Maritime Commission and Justice Department to enforce legal protections against the shipping cartels.

When the bill passed the Senate in March, Klobuchar touted its ability to tackle inflation and profiteering by shipping companies.

“Congestion at ports and increased shipping costs pose unique challenges for U.S. exporters, who have seen the price of shipping containers increase four-fold in just two years, raising costs for consumers and hurting our businesses,” she said in a press release. “Meanwhile, ocean carriers that are mostly foreign-owned have reported record profits. This legislation will help American exporters get their goods to market in a timely manner for a fair price.” The Panama-flagged ship Ever Given set sail towards the northeastern Egyptian city of Ismailia for its departure from the Suez Canal and resumption of its voyage to the Dutch city of Rotterdam, on July 7, 2021.

Despite this progress, neither Garamendi’s nor Klobuchar’s bill addresses a major cause of the market consolidation that’s enabling shipping companies to extract such exorbitant profits: exemption from anti-monopoly prosecution. By reining in global shipping, their measures also serve to benefit Big Agriculture, which is itself highly concentrated — not to mention environmentally destructive.

Much of the carrier industry’s economic power dates back to the 1998 Ocean Shipping Reform Act, which ironically shares a title with Garamendi and Klobuchar’s legislation. The Clinton-era bill allowed shipping companies to negotiate confidential deals with their customers, an about-face from the federal government’s decades-old policy to regulate carriers as public utilities. That policy was part of an arrangement whereby the companies were guaranteed immunity from antitrust prosecutions, which the 1998 measure kept in place. Three global shipping alliances now control 80 percent of the market.

Biden has called on Congress to address the antitrust immunity, though the Ocean Shipping Reform Act of today doesn’t touch it. Garamendi said he does believe that the exemption should be repealed but that it has to be done “carefully.” As such, there will be a rewrite, he said, of legislation introduced in March by Rep. Jim Costa, D-Calif., called the Ocean Shipping Antitrust Enforcement Act, to remove the waiver.

“This is a strong bill that will rein in the abusive practices we have seen from these shipping companies and we look forward to this legislation being signed into law,” said Klobuchar spokesperson Jane Meyer in a statement to The Intercept.

“Senator Klobuchar also is working with Representative Garamendi on additional shipping legislation as well as building support for a bill with Senator Booker to allow third parties like exporters to pursue legal action against shipping companies,” Meyer added, pointing to the senator’s Ocean Shipping Competition Reform Act. The legislation would allow third parties to wage legal challenges against ocean carriers for anticompetitive practices, but it would not repeal the antitrust exemption.

“The ocean shipping companies need to be aware that their day is coming.”

“The ocean shipping companies need to be aware that their day is coming, that their ability to manipulate the market — to purposefully, for their own economic benefit, for their profitability, to really screw American exporters — is over, and that I’m not backing away from this issue,” Garamendi added.

The California Democrat also said he’s committed to confronting the concentrated agricultural sector that’s been advocating for his bill to rein in the shipping industry. The meatpacking industry, for example, only has four major companies, like Tyson Foods, which is publicly supporting the new Ocean Shipping Reform Act.

“Ma’am, I’m a rancher,” said Garamendi, “and ranchers have been screwed repeatedly, decade after decade, by the middleman all the way to the retailers, and consolidation is the mechanism that has made it worse and worse over the years.”

He said it’s essential to fund the antitrust division of the Justice Department to help the small farmers who’ve been disadvantaged. “All the mechanisms are in place to deal with this. The question is the willingness to do so, and thankfully, we have a president that has spoken publicly about this multiple times.”

Biden brought up the problem in his State of the Union earlier this year. “Small businesses and family farmers and ranchers, I need not tell some of my Republican friends from those states, guess what, you’ve got four basic meatpacking facilities,” he said. “That’s it. You play with them or you don’t get to play at all, and you pay a hell of a lot more.”

Update: June 9, 2022
This story has been updated to include a statement from a spokesperson for Amy Klobuchar.