President Joe Biden is now pushing for a version of the Abraham Accords on steroids, leaving Palestinians behind. 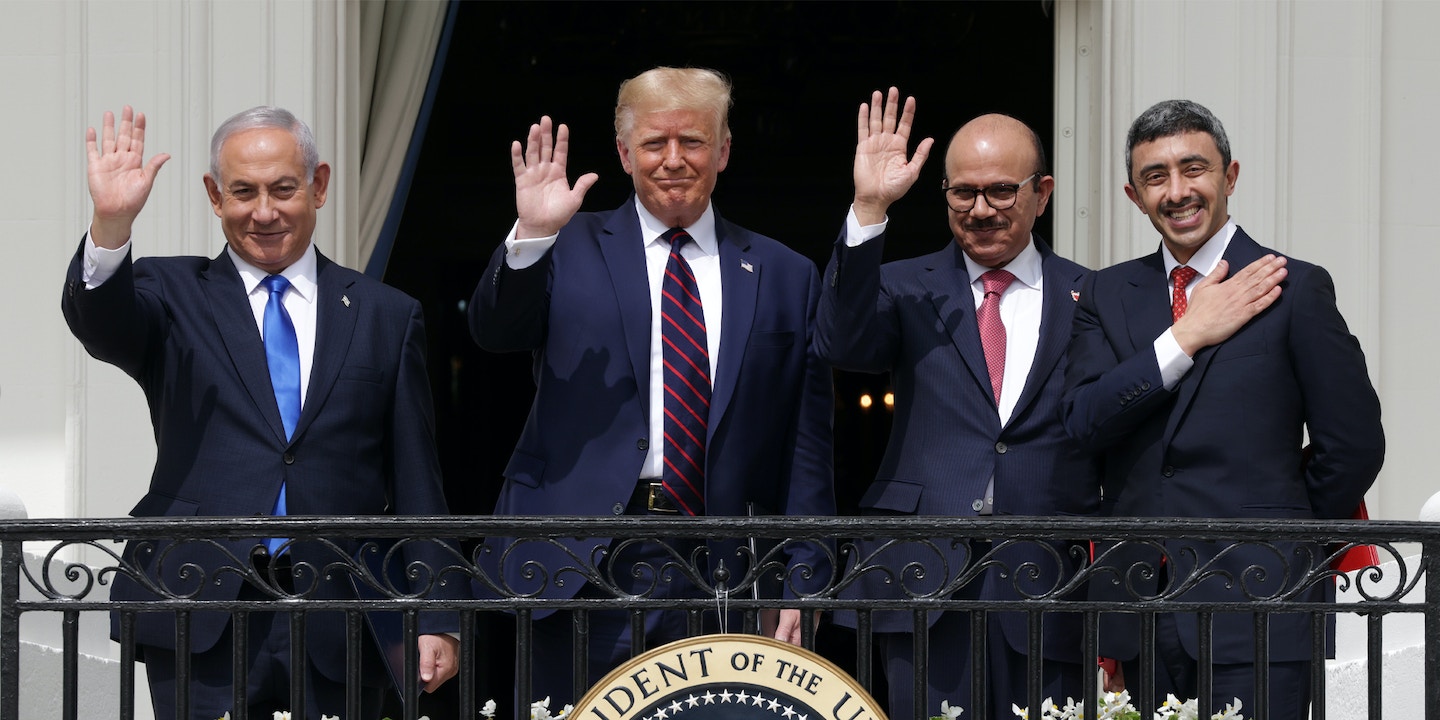 In 2020, as then-President Donald Trump was busy touting the newly signed Abraham Accords as a historic peace agreement in the Middle East, his own Department of Homeland Security was warning that the agreement, far from ushering in peace, heightened the risk of terrorism, according to a document obtained by The Intercept under the Freedom of Information Act.

The Abraham Accords, which were spearheaded by Trump adviser and son-in-law Jared Kushner, are commonly described as normalizing relations and establishing formal diplomatic ties between the United Arab Emirates, Bahrain, and Israel. At its heart a business deal, the Abraham Accords facilitated financial investment between the countries, as well as military and surveillance cooperation. But in order to accomplish what had previously been considered nearly impossible, Kushner’s deal carved out the major question at issue: Israel’s ongoing occupation of Palestinian territories. Striking a peace agreement that didn’t resolve that question would only inflame tensions, Homeland Security warned.

The document, dated October 19, 2020, is an intelligence assessment disseminated by the department’s Office of Intelligence and Analysis to other government agencies. Its title summarizes the short brief: “Terrorists’ Longstanding Grievances Very Likely Exacerbated by Israel’s Normalization of Relations with Two Gulf States.” Citing the example of the mass shooting by a Saudi military officer at a U.S. air base in Pensacola, Florida, in 2019, motivated by the Trump administration’s decision to move the U.S. Embassy to Jerusalem, the report warned that the Abraham Accords normalization would almost certainly intensify terrorist grievances and could endanger people not just in the region but also in the U.S.

“We assess that US-based foreign terrorist organization (FTO) supporters’ existing grievances about the US Government’s Middle East foreign policy, such as viewing the United States as responsible for Israeli actions, will almost certainly be exacerbated by Israel’s normalization of relations with Bahrain and the United Arab Emirates,” the assessment states.

The intelligence report’s warnings have renewed significance in light of President Joe Biden’s push for a version of the Abraham Accords on steroids — in which Israel would “normalize” relations with Saudi Arabia, home to Mecca, the holiest site in Islam, as well as a far larger Arab population than that of the UAE or Bahrain. Like Trump, the Biden administration has sought to portray this as a peace agreement. But it is, again, essentially a financial deal in which Israel and its Gulf neighbors are choosing economic benefits and shared security concerns about Iran over their moral responsibility to the Palestinian people. Experts warn that normalizing relations between Israel and Saudi Arabia without addressing the ongoing occupation of the Palestinian territories will worsen regional tensions.

“It’s going to intensify the conflict between Israel and the Palestinians,” Trita Parsi, executive vice president of the Quincy Institute, said of Saudi-Israel normalization. “This is giving Israel a green light to keep occupied territory and continue to expand into Palestinian territory. That will make the problem worse and push us farther away from any workable peace.”

What’s more, normalization poses a cost not just to Palestinians but to the United States as well. This takes the form of a heightened risk of terrorism in the U.S., as the intelligence assessment notes, but also leaves the U.S. on the hook to respond to resultant instability in the Middle East. Given the unpopularity of the proposal in the Arab world, which sympathizes with the plight of Palestinians, the Biden administration would have to offer a sweetener to make the deal more palatable to the Arab governments. The Biden administration has reportedly discussed security guarantees with the UAE, in which the U.S. would promise military assistance at its request.

On Wednesday, the Council on Foreign Relations released a high-profile report calling for “increased security assurances from the United States in exchange for greater Saudi mediation of oil prices … and further diplomatic normalization with Israel.”

“The U.S. government is engineering, and paying handsomely for, an expansion of an authoritarian alliance in the Middle East that is already coming back to bite us in the ass.”

“The U.S. government is engineering, and paying handsomely for, an expansion of an authoritarian alliance in the Middle East that is already coming back to bite us in the ass,” Sarah Leah Whitson, executive director of Democracy for the Arab World Now, said. “Bringing Saudi into the Abraham Accords will only strengthen the power of this new axis to negotiate as a bloc with the U.S., as they’ve already been doing: They have in unison refused to support the U.S. on Ukraine and in unison demanded concessions for their cooperation, including a new security agreement obligating the U.S. to defend them.”

“This will only weaken the U.S.’s ability to pursue its own interests on a bilateral basis with any one of these axis states, while further emboldening them to pursue reckless aggression and criminal behavior in the Middle East.”

The intelligence report — unlike the Abraham Accords — makes repeated mention of Palestinian concerns. In one redacted passage, the assessment mentions an unnamed entity as having “claimed the Palestinian people were betrayed” by the “establishment of diplomatic ties between Israel and the UAE.” Another passage, also partially redacted, mentions another unnamed entity “encouraging violence” against Israeli and UAE officials and interests in response to normalization.

While the report’s predictions have mostly borne out in the Middle East if not in the U.S., with periodic violence continuing to erupt over Israel’s occupation, it is impossible to isolate the effects of the Abraham Accords specifically. The report also suggested that the Iranian government would try to use the normalization’s lack of concessions to Palestinians to suggest “that the US government engages in racism and colonialism.” The assessment notes that this narrative would likely “amplify violent extremist activity” in the domestic United States, including against Jewish people.

“The main downside of Biden pushing Saudi-Israeli normalization is mistaking that for doing something useful,” said Marc Lynch, a professor of political science and international affairs at George Washington University. “The downsides really lie in further enabling Israel to ignore the Palestinian issue, which most Arabs really do still care about and which is likely to erupt in repeated crises as long as it goes unsolved. It actually makes such eruptions more likely because it emboldens Israel to push faster and harder in its appropriation of land and homes in the West Bank.”