Attorney General Merrick Garland has been criticized for not going after the powerful people responsible for inciting the January 6 insurrection. 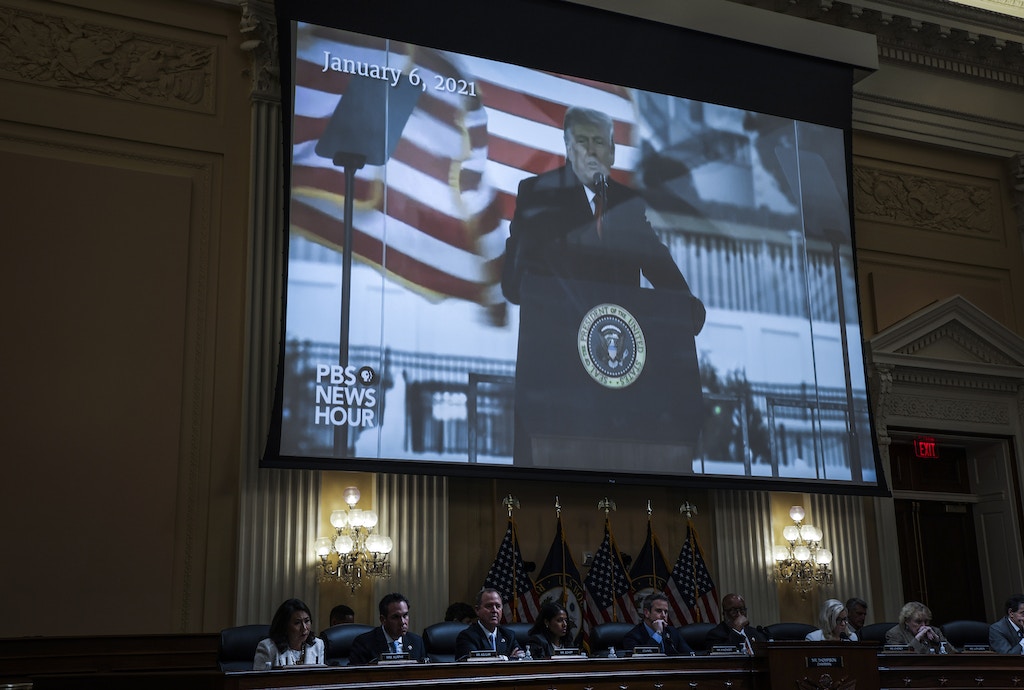 A video featuring former President Donald Trump is played during the House Select Committee to Investigate the January 6 Attack on the U.S. Capitol in Washington, D.C., on June 23, 2022.

Just before the House January 6 committee’s dramatic hearing on Thursday on former President Donald Trump’s efforts to use the Justice Department to overturn the 2020 election, the FBI raided the Virginia home of Jeffrey Clark, the former Justice Department official who worked most closely with Trump to try to keep him in power.

The FBI raid was overshadowed by the subsequent hearing, during which Clark’s efforts to conspire with Trump were laid bare. But the raid is significant because it provides a tentative sign that the Justice Department may finally be conducting a criminal investigation of Trump and his allies for their attempt to stage a coup.

Until recently, the Justice Department’s investigation of the January 6 insurrection seemed to be focused on the individuals who were part of the mob that stormed the U.S. Capitol to try to stop Congress from certifying the 2020 presidential election. Federal prosecutors handed out modest charges to many of those low-level rioters, leading to criticism that Attorney General Merrick Garland was not going after the powerful people responsible for actually inciting the insurrection.

But in early June, prosecutors charged the leader of the Proud Boys and other members of the white nationalist extremist group with seditious conspiracy — the first sign that Garland and the Justice Department were beginning to move against the leadership of the insurrection. Now, the raid on Clark’s house suggests that the Justice Department has expanded its investigation beyond January 6, in order to investigate the repeated attempts by Trump and his allies throughout the transition period between November 2020 and January 2021 to try to illegally overturn the election.

The evidence of a broader Justice Department investigation comes as the House January 6 committee has far exceeded expectations for its public hearings, uncovering damning evidence of the lengths that Trump was willing to go to stay in power. The hearings have turned into something like a nationally televised criminal referral to the Justice Department. It would be difficult for Garland not to take action in the face of the facts disclosed in the House hearings.

If a criminal conspiracy case is to be developed against Trump, gathering evidence from and about Clark would be a good place to start.

Clark is a conservative Washington, D.C. lawyer who has bounced between law firms, government jobs, and right-wing activism. After representing BP in connection with the Deepwater Horizon disaster, he joined the Trump Justice Department as assistant attorney general for the environmental and natural resources division, where he sought to delay bringing charges against a pipeline operator in North Dakota for a wastewater spill.

Clark was a total Trump loyalist, willing to do anything to help the president stay in power. In the midst of Trump’s frantic efforts to overturn the election, Clark was eager for Trump to fire acting Attorney General Jeffrey Rosen and then take over himself at the Justice Department. Once he was in charge, he planned to issue a letter to state officials in Georgia claiming, falsely, that the Justice Department had found evidence of election fraud and recommending that the Georgia state legislature should be called into special session to reopen the whole debate about who won the presidential election there. The unsent letter was filled with lies; the Justice Department had no evidence of election fraud. Trump had repeatedly been told by senior Justice officials that they had no such evidence, and Clark certainly had to know that as well.

Eric Herschmann, a lawyer who worked for Trump, told the House committee that he had warned Clark that if he took over at the Justice Department and sent the letter to Georgia officials, he would be guilty of a crime. That may explain the FBI raid on Clark’s home, where the Justice Department’s case against Trump may begin. Are Trump and Clark guilty of a “seditious conspiracy” a couple levels up from the Proud Boys?