U.S. Vows to Hunt Russian War Criminals — but Gives a Pass to Its Own

Attorney General Merrick Garland announced investigations of war crimes committed in Ukraine. But America has a surplus of its own unpunished atrocities. “There is no place to hide,” said U.S. Attorney General Merrick Garland during a surprise trip to Ukraine this week, announcing that a veteran prosecutor known for hunting down Nazis would lead American efforts to investigate Russian war crimes. “We will pursue every avenue available to make sure that those who are responsible for these atrocities are held accountable,” he added.

Garland didn’t need to travel 4,600 miles in pursuit of war criminals. If he wanted to hold those responsible for atrocities accountable, he could have stayed home.

In a suburban Maryland neighborhood, just over an hour away from Garland’s office, I once interviewed a U.S. Army veteran who confessed to shooting, in Vietnam, an unarmed elderly man in 1968. He didn’t just tell me. He told military criminal investigators in the early 1970s but was never charged or court-martialed. He retired from the Army in 1988.

The United States is awash in war criminals. Some are foreigners who fled accountability in their homelands. Most are homegrown. They live in places like Wheelersburg, Ohio (a confessed torturer), and Auburn, California (a West Point grad who presided over a massacre). Like these veterans, most have never been charged, much less tried or convicted. If Garland or Eli Rosenbaum, whom he tapped to lead the Ukraine War Crimes Accountability Team, want to find them, I can provide addresses.

I located those veterans through the records of a secret war crimes task force set up by the Pentagon during the Vietnam War. Today, even that bare modicum of accountability has vanished. It’s now anathema for the Defense Department to mention U.S. personnel and “war crimes” in the same breath.

Last month, a Pentagon investigation of a 2019 attack in Syria that killed dozens of people, including women and children, found “numerous policy compliance deficiencies” in the military’s initial review of the airstrike, but ultimately held that no one violated the laws of war and no disciplinary action was warranted.

The anonymous personnel involved in the Syria strike — including the F-15 pilot, drone crew, lawyers, analysts, and members of a Special Operations task force — are typical of Americans involved in civilian deaths during the 20-plus years of the so-called war on terror who have rarely been publicly identified, criminally investigated, or subjected to the scrutiny of anything like a war crimes accountability team. We generally don’t know their names though due to the work of journalists and nongovernmental organizations, we know their handiwork. 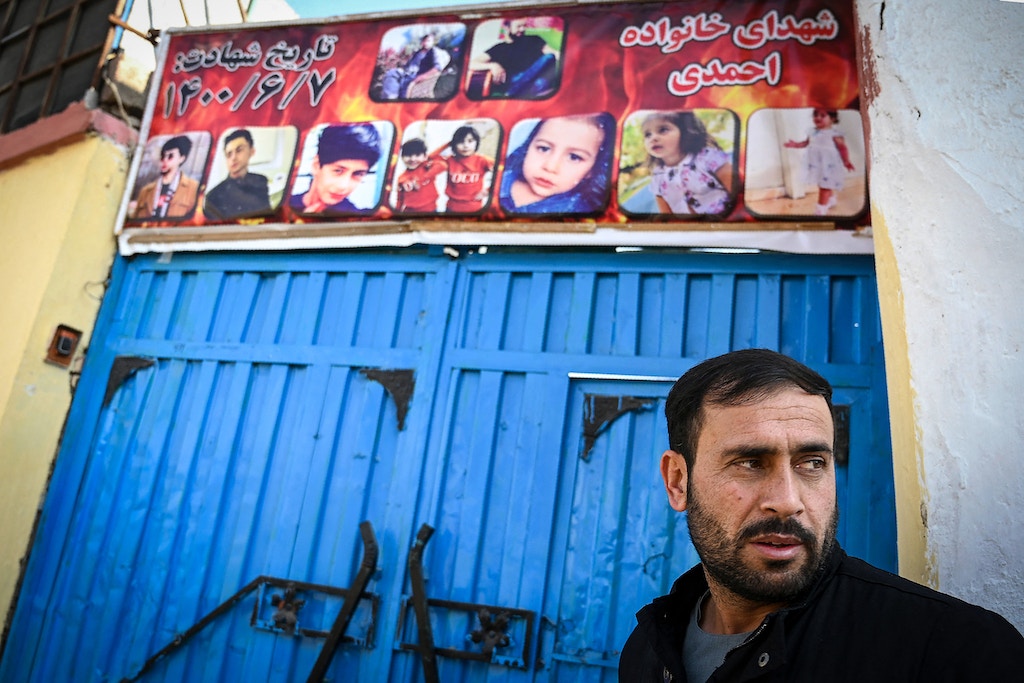 Aimal Ahmadi, whose young daughter and elder brother were among 10 civilians killed by a U.S. drone strike in August, outside his house in Kabul, Afghanistan, on Dec. 14, 2021.

There was the August 2021 “righteous strike” against a terrorist target in Afghanistan that actually killed 10 civilians, seven of them children. There were the air and artillery attacks in Raqqa, Syria, that the Pentagon said killed 159 civilians, but Amnesty International and Airwars, a U.K.-based airstrike monitoring group, found had left more than 1,600 civilians dead. There was the drone strike that killed 30 pine nut farm workers in Afghanistan in 2019. An April 2018 attack in Somalia that killed a 22-year-old woman and her 4-year-old daughter. An airstrike in Libya, later that year, that killed 11 civilians. The attack that same year in Yemen that killed four civilians and left another, Adel Al Manthari, gravely injured. The seven separate attacks in Yemen by the United States — six drone strikes and one raid — between 2013 and 2020 that killed 36 members of the intertwined al Ameri and al Taisy families. And the military’s confidential assessments of more than 1,300 reports of civilian casualties from airstrikes in Iraq and Syria from 2014 to 2018, published as “The Civilian Casualty Files” by the New York Times late last year, among so much other evidence.

Last year, then-Pentagon (now National Security Council) spokesperson John Kirby claimed that “no military in the world works as hard as we do to avoid civilian casualties.” Experts said otherwise. “Civilian protection is not prioritized. We’re not the best because we’re choosing not to be the best,” Larry Lewis, who spent a decade analyzing military operations for the U.S. government, told The Intercept. The seemingly endless number of known civilian casualty incidents that deserve an investigation or reinvestigation also indicates that Kirby’s spin just isn’t true. What’s also clear is that the Pentagon, as Secretary of Defense Lloyd Austin put it in April, has no intention to “re-litigate cases.”

This week, a leaked draft of House Armed Services Committee Chair Adam Smith’s version of the 2023 defense spending bill called for a Commission on Civilian Harm to investigate the human toll of 20-plus years of war. “At a minimum, the Commission has the potential to provide the most comprehensive assessment and accounting of civilian harm during the war on terror,” Brian Finucane, a senior adviser at the International Crisis Group, told The Intercept. A war crimes accountability team assembled by Garland could put iron in the commission’s glove.

Recently, Beth Van Schaack, the State Department’s ambassador at large for global criminal justice, noted that Russian war crimes were not the actions of “a rogue unit, but rather a pattern and practice across all the areas in which Russia’s forces are engaged.” She added that responsibility extended to “individuals up the chain of command who are aware that their subordinates are committing abuses and who failed to do what is necessary to either prevent those abuses or to punish the perpetrators.” To that end, before conducting investigations of civilian harm committed by drone pilots and special operators across war zones from Syria to Somalia, and Libya to Yemen, the U.S. should start with the original architects of the “war on terror” and the invasions of Afghanistan and Iraq, including former President George W. Bush, Vice President Dick Cheney, and national security adviser Condoleezza Rice.

If Garland is truly outraged by “heart-wrenching accounts of brutality and death” and committed to pursuing “every avenue of accountability for those who commit war crimes,” he doesn’t need to dispatch investigators abroad. There are plenty of war criminals, hiding in plain sight, right here.