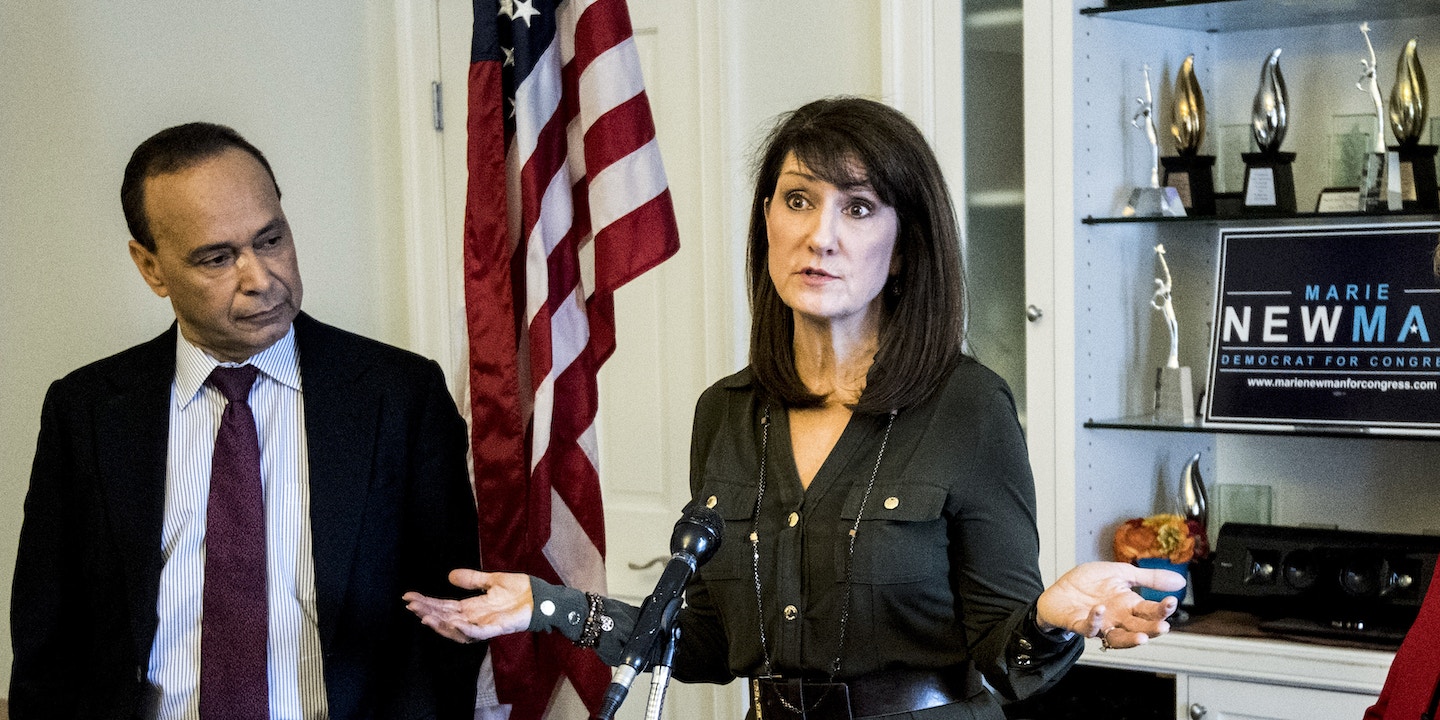 In a hotly contested 2020 primary, progressive Marie Newman, the Justice Democrats candidate for Illinois’s 3rd Congressional District, ousted eight-term Rep. Dan Lipinski, one of the last anti-abortion Democrats in Congress. Many House Democrats countered party norms by backing Newman, choosing to stand up for reproductive rights rather than exhibit loyalty to the incumbent. “I think that an anti-choice position is a relic of our past and it is firmly in the Republican ideology, and I do not think that is what our party should be standing for,” said Rep. Alexandria Ocasio-Cortez at the time.

But on Tuesday night, in the nation’s first primary elections since the Supreme Court overturned Roe v. Wade, the first-term representative was voted out of Congress by a large margin. Illinois redistricting forced Newman into a member-on-member primary, and she opted to run against Rep. Sean Casten, who was elected in 2018 and beat a six-term Republican. During her first primary as an incumbent, Newman faced challenges from outside Congress and within: outside groups that spent just under half a million dollars against her, and a congressional ethics probe that ultimately hurt her candidacy. Hers is the first loss of an incumbent backed by Justice Democrats.

“Unfortunately, we did not get the result we were looking for this evening,” Newman said in a statement conceding the race. “Win or lose, we have achieved something truly historic, and done so much good for this community.”

Elsewhere in Illinois, an anti-abortion Democrat backed by Lipinski came in fifth in the 1st Congressional District’s crowded field of 17 candidates. Progressives other than Newman saw mixed results in the state Tuesday night, offering some hope for the left while a Republican takeover of Congress looms.

In an open primary in Illinois’s newly drawn 3rd District, Working Families Party-backed state Rep. Delia Ramirez overcame a flood of outside spending to defeat Chicago Alderman Gil Villegas, who had the support of conservative Democrats in the local machine and in Congress. In November, Ramirez will face Republican candidate Justin Burau, who ran in an uncontested primary on Tuesday.

She is the 6th Working Families Party congressional candidate to win their primary in the 2022 election cycle. pic.twitter.com/bqDIlttIUP

In Illinois’s 7th District, 13-term Rep. Danny Davis defeated his second challenge from anti-gun violence advocate Kina Collins, who also ran against Davis in 2020 and lost by 46 percentage points. (With 68 percent of the vote in, Davis appears to have beaten Collins by 7 points this cycle.) And in the 1st District, where 15-term Rep. Bobby Rush announced he would retire in January, civil rights activist Jonathan Jackson — son of Rev. Jesse Jackson — won in a field of 17 candidates. Lipinski’s pick, Chris Butler, got just 5.6 percent of the vote.

Outside groups that have spent millions targeting progressives in competitive primaries this cycle poured money into Tuesday’s races to back Villegas, Casten, and Davis. VoteVets Action Fund, a committee linked to political action committees for Senate and House Democrats, and Mainstream Democrats PAC, a new committee backing conservative Democrats founded by tech billionaire Reid Hoffman, spent more than $1 million on the race to fight Ramirez and support Villegas. Democratic Majority for Israel spent just under $160,000 since late May on ads attacking Ramirez or backing Villegas, and bought ads attacking Newman earlier this month. Opportunity for All Action Fund, a dark-money group aligned with powerful Democrats, poured another $300,000 into the 7th District race on Thursday to back Davis.

Earlier this month, Sanders held a joint rally in Chicago to support Ramirez and Jackson. Villegas, who was previously the City Council floor leader for Chicago Mayor Lori Lightfoot, was backed by the Chicago Tribune, conservative members of the Chicago City Council, the clerk of the Circuit Court of Cook County, and unions including the Chicago Police Sergeants’ Association. Capitalizing on salient tough-on-crime narratives, Villegas had claimed that Ramirez would “defund the police.”

In the 7th District contest, the Chicago Tribune endorsed Collins on June 13 and wrote that while Davis’s long tenure and record of public service had earned the respect of the editorial board, “we think the time has come for new blood, and we endorse Collins.” His campaign started running ads in the final weeks before the primary, including one bizarre clip that showed him speaking in front of a virtual image of the Capitol on Zoom.

This story has been updated with new results from Tuesday’s primary.