Last spring, a van arrived at an inspection station near one of the gates at Fort Eustis in Newport News, Virginia. Military police noticed what looked like chemicals inside and that passengers were “displaying signs of illness.” Soon first responders arrived, donned protective gear, and, according to a military press release, searched “the vehicle for possible CBRNE exposure,” using the acronym for chemical, biological, radiological, nuclear, and high-yield explosives.

That “CBRNE exposure” wasn’t real — it was part of a training exercise. “My biggest takeaway is that all the agencies work well together,” Tim Scott, a lieutenant with the Fort Eustis Fire Department, said at the time, noting that coordination among multiple agencies was essential to ensuring that a similar real-world incident could be handled efficiently and effectively.

But an internal Army audit obtained exclusively by The Intercept indicates that a genuine CBRNE event might have ended in disaster.

The results of the audit, issued just days after the April 2021 exercise at Fort Eustis, were dismal. Investigators surveyed five Army bases to ascertain whether they were prepared to deal with an actual CBRNE emergency, like a chemical weapons accident or “dirty bomb” attack. In every case, they were not.

“The Army didn’t take the required actions to ensure that installation first responders had the necessary equipment and training to respond to a chemical, biological, radiological, nuclear, and high-yield explosive (CBRNE) incident at the five installations we reviewed,” according to the document, which was obtained under the Freedom of Information Act. According to the audit, such failings likely exist across the Army, which operates around 1,800 bases, depots, and other sites worldwide, including storage facilities for America’s remaining chemical weapons and a research institute that works with lethal pathogens like anthrax and plague.

The audit placed the lion’s share of the blame on the emergency management branch of the headquarters of the Department of the Army for failing to provide “sufficient oversight.” The Army did not provide comment about the audit’s findings prior to publication. “None of us are familiar with the report or its contents so we will need to ask around, which may take some time,” spokesperson Richard Levine told The Intercept. 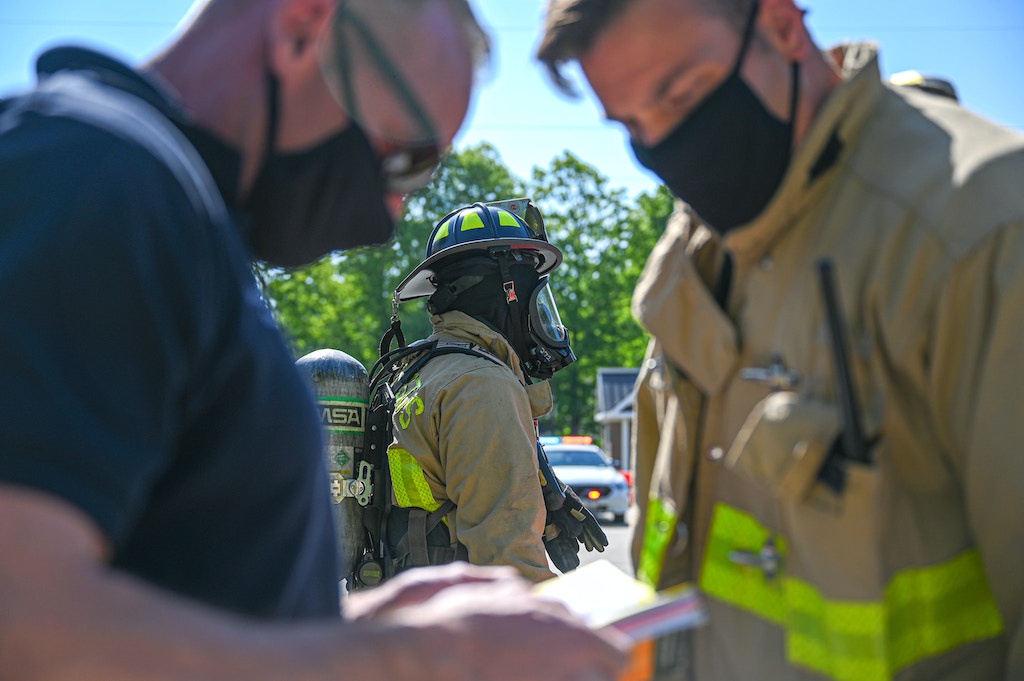 The audit, which was conducted from September 2019 through December 2020, found that the Army failed to provide enough required respiratory protection for all civilian first responders. At two bases, the Army also neglected to ensure that all civilian personnel completed CBRNE preparedness training.

The Army did not disclose the names of all five installations in the redacted document, but the audit mentions Kentucky’s Blue Grass Army Depot, where both explosive munitions and chemical weapons are stored; Fort Bliss in Texas, which is larger than the state of Rhode Island; and Washington state’s Joint Base Lewis-McChord, which has a population of approximately 110,000 active-duty troops, family members, and civilian employees. The audit determined that civilian first responders at the latter two bases were also not using required National Institute for Occupational Safety and Health-approved respirators.

The auditors determined that the five installations were lacking a total of 241 pieces of equipment necessary for CBRNE response missions, including hand-held devices designed to detect chemical warfare agents, air-purifying gas masks, and hazmat boots. The investigators also “couldn’t determine the existence of six other items,” including additional chemical agent detectors and decontamination shelters, valued at more than $142,000.

When equipment was located by auditors, large quantities — 89 percent of 440 pieces that were collectively valued at around $1.2 million — were not listed in required documents, leaving the items “susceptible to loss or theft” or the Army in danger of purchasing “unnecessary or duplicate equipment.”

The investigators also found that key “personnel confirmed the lack of clear roles and responsibilities for assessing equipment requirements and documentation” and “weren’t provided specific guidance on determining, fielding, or sustaining” required gear. “These adverse conditions likely exist Armywide,” according to the audit, “and should be corrected.”

The audit’s findings come as the possibility of military CBRNE catastrophes is on the rise. The Defense Department recently announced plans to build nuclear microreactors to power far-flung, austere military bases. An earlier Army effort to field portable nuclear reactors resulted in an explosion and meltdown that killed three military personnel in Idaho in 1961. A fire burns on the amphibious assault ship USS Bonhomme Richard at Naval Base San Diego on July 12, 2020.

Last year, the Defense Department warned that chemical and biological weapons “threats remain significant and are expanding at an exponentially accelerated pace.” The military also continues to store its own chemical weapons at the U.S. Army Pueblo Chemical Depot in Colorado as well as the Blue Grass Army Depot. (The last chemical agents in the U.S. stockpile are scheduled to be destroyed, under the Chemical Weapons Convention, by September 30, 2023.)

In 2019, due to safety concerns over insufficient decontamination methods, the Centers for Disease Control and Prevention shut down research at the Army’s Medical Research Institute of Infectious Diseases in Fort Detrick, Maryland, where work centers on toxins and germs, including so-called select agents such as the Ebola virus, smallpox, anthrax, plague, and the poison ricin. Work there resumed in 2020.

That same year, a fire and “massive” explosion destroyed the $1.2 billion amphibious assault ship USS Bonhomme Richard due to, among many issues, a disorganized federal and civilian response and Navy firefighters reportedly lacking the necessary equipment to battle the blaze.