While upending climate legislation, Manchin directed over $15 million in federal funding to protected wetlands where the couple owns property. 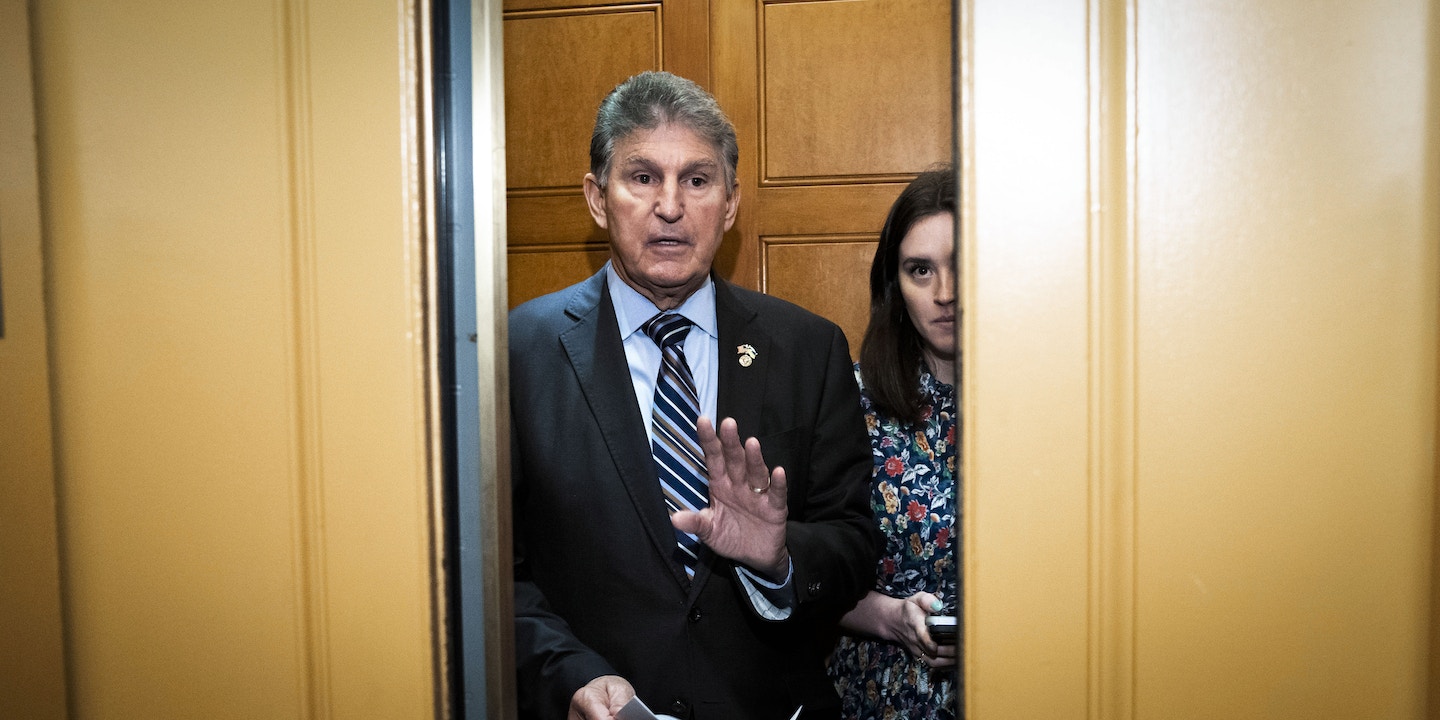 On Thursday, after months of negotiations, Sen. Joe Manchin said he would not support even a stripped-down version of the reconciliation package to invest billions of dollars in federal funds to combat the climate emergency — a version that was written to appease him. Senate Majority Leader Chuck Schumer, D-N.Y., believed that he was close to reaching a deal that would satisfy the whims of the senior senator from West Virginia while also passing a vast climate investment package, drug pricing legislation, and new taxes on the wealthiest Americans to pay for the new spending. After the story broke, Manchin backtracked, claiming that July’s inflation numbers would be the deciding factor on whether he could support what President Joe Biden once hoped would be his signature policy achievement. Democratic leaders said Manchin had told them otherwise, and remaining hopes to pass significant climate legislation were dashed.

But while Manchin has sabotaged federal efforts at combating climate change, he has used federal dollars to preserve his own corner of the world. Public records reviewed by The Intercept show that even after Manchin’s decadeslong efforts to upend environmental policy that would undercut the fossil fuel companies funding his political campaigns (and the waste coal industry generating his personal fortune), he and his wife, Gayle Manchin, have directed millions of federal dollars to a small, pristine valley in West Virginia where the couple owns a condo. Hundreds of miles north of the coal communities decimated by the mountaintop removal mining that Manchin fostered in the state, the Manchins’ Canaan Valley residence sits in an unadulterated watershed, surrounded by the Dolly Sods Wilderness, the Canaan Valley National Wildlife Refuge, and Blackwater Falls State Park.

The couple purchased the condo in Davis, West Virginia, in 2011, according to the deed. In 2018, Manchin used his spot on the powerful Senate Appropriations Committee to secure $7 million to rebuild the visitor center at the Canaan Valley National Wildlife Refuge, less than a mile from his condo. In addition to conference rooms, museum-style exhibits, and a bookstore, the new space also houses offices for the U.S. Fish and Wildlife Service, which maintains the valley’s natural landscape and stocks the streams that Manchin, an avid trout fisher, wades in.

Took a day for some great trout fishing near Seneca Rocks in Wild and Wonderful #WV #publiclands pic.twitter.com/qRksDASDe0

“Our public lands are what makes West Virginia Wild and Wonderful and I am so proud of everyone who helped take this dream this far,” said Manchin in a 2020 statement following a visit to the center, celebrating the progress made on “conservation and outdoor recreation.” “This wonderful initiative started in 2014 and is a testament to what can happen when the government works as our partner. I look forward to seeing the Visitor Center completed soon and when it’s safe, filled with tourists who come from all over to see the beauty and wildlife in the wonderful Mountain State.”

This year, as he was holding federal climate legislation hostage, Manchin again used his seat on the Appropriations Committee to secure an $8 million earmark to build a new water treatment facility in Canaan Valley as part of an omnibus spending bill. At the same time, his wife was also directing federal funds to the area. Gayle Manchin was appointed by Biden to head the Appalachian Regional Commission last year, a post overseeing hundreds of millions of dollars in grants intended to modernize underdeveloped parts of Appalachia. She recently secured another $25,000 in funding for source water analysis in the valley — where the water system is currently failing to meet capacity — and a $1.2 million “POWER” grant to connect and improve trails in the area.

It would not be the first time that funds approved by the Appalachian Regional Commission chair were tied to the personal investments of the Manchin family. As Sludge reported in March, since assuming leadership of the commission, Gayle Manchin has directed millions of dollars in federal grants to projects tied to her personal investments. This includes a $1.5 million grant to the Appalachian Investors Alliance, whose director, Mike Green, also chairs an investment LLC that Gayle is invested in and sits on the board of a startup that she holds stock in. Gayle also directed hundreds of thousands of dollars to the West Virginia Regional Technology Park Corp., whose treasurer, Jack Rossi, is also the longtime treasurer for Joe Manchin’s campaign committee and leadership PAC.

Neither Joe nor Gayle Manchin responded to a request for comment.

Famous for shooting a hole through President Barack Obama’s climate legislation, Manchin has long espoused contradictory sentiments on conservation. He is an avid hunter and fisher who frequently describes his fondest memories as spending time in nature with his father. He has also vocally supported some of the most environmentally catastrophic fossil fuel extraction projects in the country while launching attacks on the federal government’s ability to pursue environmental regulation as the chair of the Senate Committee on Energy and Natural Resources.

Even before his ascent to the Senate, Manchin lashed out at the Environmental Protection Agency as governor of West Virginia, suing to limit the EPA’s ability to enforce the Clean Water Act against mountaintop removal mining. The 2010 lawsuit was egregious for two reasons: First, parts of the Manchins’ coal empire have been cited for violating the Clean Water Act, leaching metals into the Monongahela watershed and coal ash residue into groundwater. The coal plant that serves as the main purchaser of Manchin coal is estimated to cause nearly $200 million in health costs to nearby residents each year.

More striking is that the very same Clean Water Act that Manchin attacked as governor is the reason the untouched wilds surrounding his Canaan Valley property remain intact. Beginning in the late 1970s and stretching well into the ’90s, a fierce battle raged in Canaan Valley between local residents, who were opposed to the damming of the Blackwater River, and the powerful Allegheny Power System, which was set on building a massive hydroelectric dam that would have flooded the valley, destroyed its unique wetlands, and ended trout fishing in the area.

After decades of uproarious public hearings organized by West Virginia environmentalists, the Army Corps of Engineers blocked the Clean Water Act permit required to build the dam, and in 1994, the Canaan National Wildlife Refuge was established as America’s 500th national wildlife refuge.

Decades before receiving protected status, parts of the wetlands were overlogged in the early 20th century, leading peat to dry out and burn through the winter, much like the climate change-induced permafrost fires ablaze across Siberia. Today the refuge serves as one of the most pristine stretches of preserve in Appalachia; a miraculously preserved ice-age ecosystem described by locals as “a little bit of Canada gone astray.”

But despite its singular beauty, the northern boreal flora clinging to life in Canaan Valley could soon disappear, as rising temperatures position West Virginia as the state most affected by worsening floods.

Dave Scott, an organizer in Manchin’s hometown of Fairmont working with the activist group West Virginia Rising, helped organize a blockade of Manchin’s coal plant and a shutdown of the upcoming congressional baseball game to protest the senator’s refusal to pass critical components of the Democrats’ legislative agenda.

“Canaan Valley is aptly named because it is absolutely just a breathtaking place. For Manchin to go to a place where I find peace, to this protected space, a place that was protected in the spirit of preservation, and siphon off a little piece for himself — it’s disgusting,” Scott said. “He’s turned the rest of a state we used to call ‘almost heaven’ into almost hell. He opened up the mountaintops, the old mine shafts; he opened up the underground strata for more leaching and more fracking. When he became governor, he even tried to change our slogan from ‘Wild and Wonderful’ to ‘Open for Business.’”

“I teach fourth grade in West Virginia, and I can attest to the fact that the children of this state are fighting hard for a life that they haven’t envisioned moving away from. This is a state that does not offer its people many choices. Our No. 1 employer isn’t coal, it’s Walmart, so you’re lucky if you get a job in the extraction industry when our entire state economy runs on desperation,” Scott said. “There are, I believe, 5,000 miles of streams in Appalachia poisoned because of the coal industry. So for Joe to blow up the climate bill, in the face of so many people who have lost access to clean water and a normal life, for him to take pleasure in the beauty of this state is atrocious. He does not represent the future that I’m fighting for, that my students are trying to prepare for, and that my own children hope to one day see.”