The Cult of Donald Trump

On January 6, Trump was not much different from Jim Jones, as he urged his rabid followers to kill American democracy. 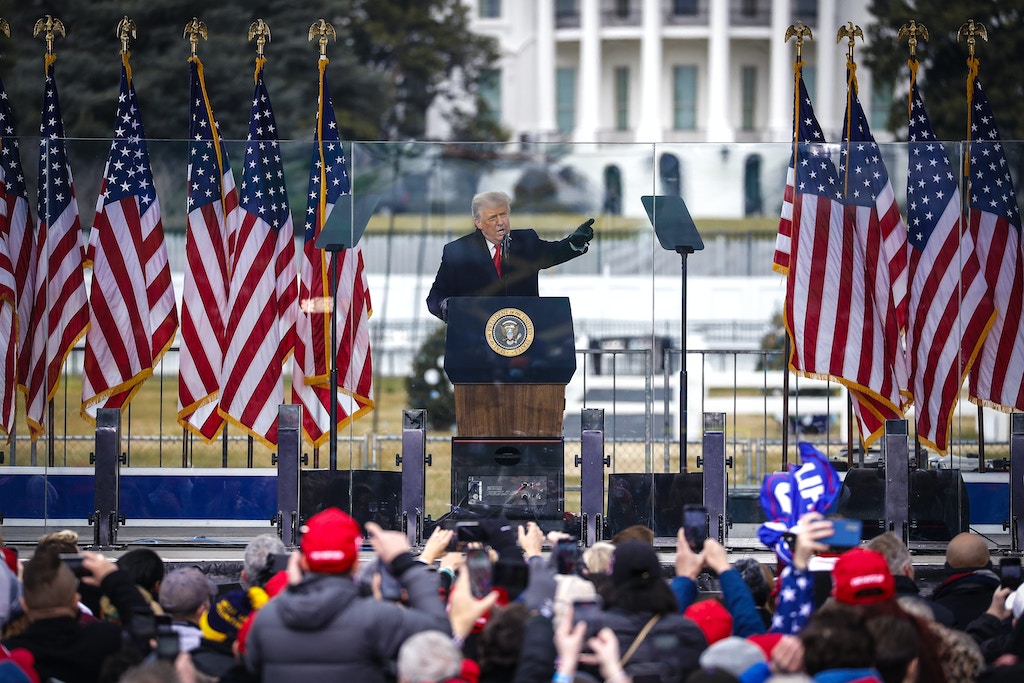 U.S. President Donald Trump speaks during a “Save America Rally” near the White House in Washington, D.C., on Jan. 6, 2021.

Donald Trump is a murderous cult leader who incited the mob that attacked the U.S. Capitol on January 6, 2021, hoping that his supporters would kill his own vice president, Mike Pence, and as many members of Congress as possible so that he could become a dictator.

That was the inescapable conclusion from Thursday night’s chilling prime-time, nationally televised hearing of the House January 6 committee. The committee combined a wide range of evidence and testimony to reveal a timeline of the insurrection, showing how Trump eagerly sent his mob to the Capitol and then refused for hours to call them off when they broke into the building. Instead, he wanted to join and lead them.

On January 6, Trump was not much different from Jim Jones at Jonestown, as he urged his rabid followers to kill American democracy.

Trump controlled the insurrection, and he could easily have stopped his cult members from attacking the Capitol, the hearing revealed. But he didn’t want to stop them. For months, he had tried everything to overturn the 2020 election and failed, so now he was willing to try assassination.

Some of the most damning evidence presented during the hearing was audio of insurrectionist leaders and video from inside the Capitol, showing how the rioters were keyed into every Trump tweet in real time and were eager to do his bidding. The evidence showed that the insurrectionists believed — indeed, knew — that they were following Trump’s orders.

As soon as the insurrection began, Trump’s family members and White House aides, along with leading members of Congress, tried to get him to call off the mob — because they all knew that it was his mob and that he could call them off if he chose to do so. That fact alone is damning evidence that should be used to prove his leadership of the insurrection in a criminal investigation by the Justice Department.

But Trump refused to listen to any of them. “The mob was accomplishing [Trump’s] purpose,” Rep. Adam Kinzinger, an Illinois Republican, said during Thursday’s hearing.

In fact, Trump did not lift a finger to try to stop the insurrection during its most critical hours, the committee revealed. He didn’t call anyone in the government — not at the Pentagon, or the Justice Department, or the Department of Homeland Security — for help gaining control over the violent crisis at the Capitol. Testimony by former Trump aides and others, including Gen. Mark Milley, chair of the Joint Chiefs of Staff, showed that Trump did nothing except call Republican senators to try to get them to refuse to certify the election. “You’re the commander in chief. You’ve got an assault going on on the Capitol of the United States of America, and there’s nothing? No call? Nothing? Zero?” Milley told the committee in disbelief.

It was finally Pence, not Trump, who ordered the military to send the National Guard to the Capitol, Milley said in audio of his testimony played during Thursday night’s hearing.

Pence’s role as the presiding officer during the congressional certification of the election on January 6 made him a target for Trump and the mob, and his Secret Service detail feared for their own lives, the committee revealed. An unidentified White House aide who was listening to radio traffic from the Secret Service told the committee that agents were calling their families to say goodbye. Trump showed no remorse for the danger in which he had put his own vice president, telling a White House staffer later that day that Pence had let him down by refusing to block the congressional certification.

It was hours after the insurrection began — and only after it was clearly starting to lose momentum — that Trump grudgingly made a half-hearted statement urging his supporters to go home.

The next day, the president showed no remorse. The committee played previously unseen video outtakes from the public statement he made on January 7, showing that he refused to say that the election was over and struggled about whether to say his followers had done anything wrong.

There was just one light moment in the hearing about the darkest day in modern American history: The committee showed video footage of Sen. Josh Hawley running for his life through the halls of Congress just after he was photographed outside the Capitol raising his fist in support of the mob.