Sen. Jon Ossoff is the first Democrat to subpoena a member of the Biden administration, BOP Director Michael Carvajal, over reports of neglected and frequent suicides. 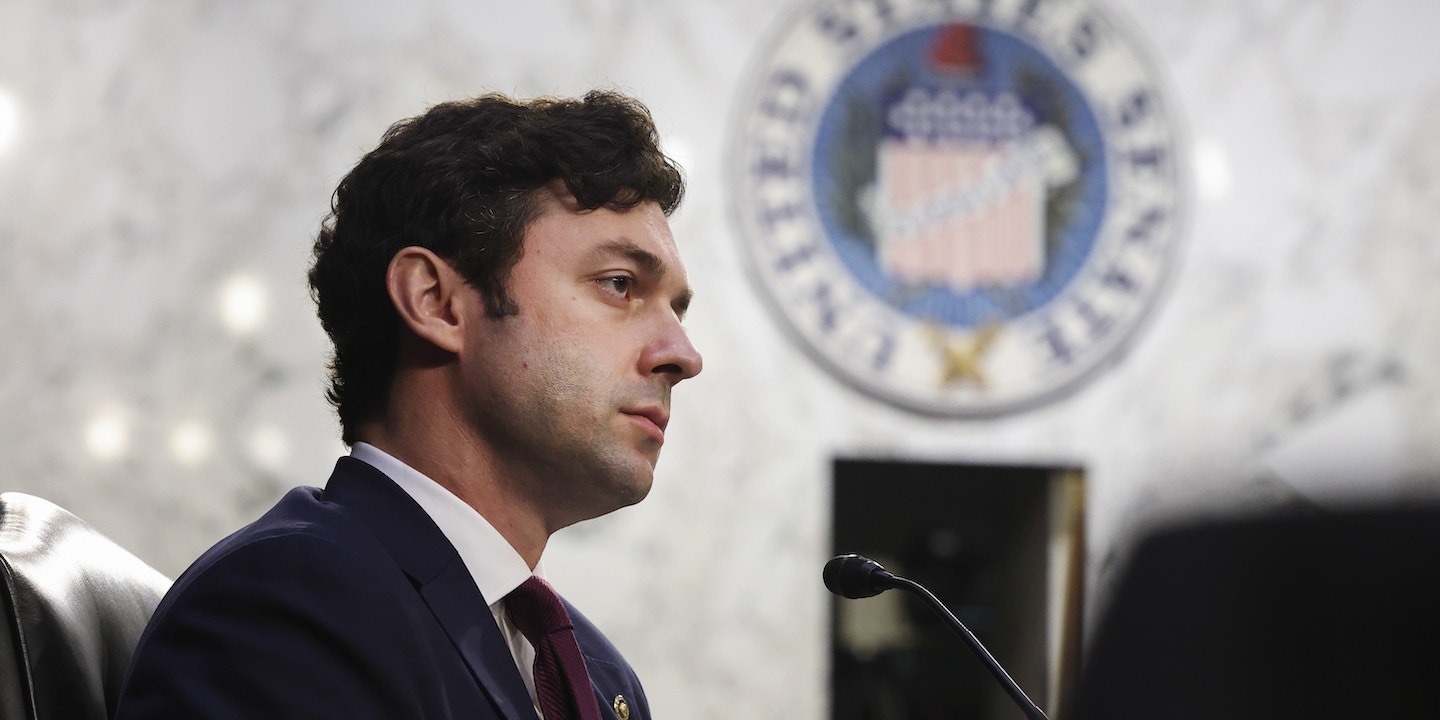 When a detainee at a federal prison facility in Atlanta, Georgia, was found hanging from a ligature in his cell in November 2018, prison staff had to borrow a razor blade from another detainee in order to cut them down.

The scene was one of several alarming accounts of conditions at U.S. Penitentiary Atlanta detailed Tuesday during a Senate subcommittee hearing. Public reporting has described several years’ worth of security and health issues at the facility, including deaths, escapes, corruption, and a smuggling ring. According to congressional investigators who spoke at the hearing, senior officials at the federal prison complex and at the federal Bureau of Prisons were aware of the issues for years and failed to adequately address them, amounting to gross misconduct.

The findings are part of an ongoing 10-month bipartisan congressional investigation into allegations of corruption and abuse at the Atlanta facility. Started last September by a subcommittee of the Senate Committee on Homeland Security and Governmental Affairs, the investigation has focused on the Atlanta complex to highlight broader issues in the federal prison system — in part because of its location in Georgia, the home state of the subcommittee chair, Sen. Jon Ossoff, D-Ga., who was previously an investigative journalist. The facility has the highest number of suicides by detainees at any federal prison over the last five years, according to internal documents and security assessments obtained as part of the investigation. Previous reporting has documented at least 13 suicides at the facility between 2012 and 2021, including five between October 2019 and June 2021.

Ossoff, who chairs the Permanent Subcommittee on Investigations, subpoenaed Bureau of Prisons Director Michael Carvajal to testify at Tuesday’s hearing after the Department of Justice refused to make him available voluntarily. The hearing, which represents the first instance of a Democrat subpoenaing an official of President Joe Biden’s administration, painted a damning picture of a bloated federal prison system run by well-informed and willfully inactive leaders. Ossoff hammered pointed questions at the BOP director, who often avoided giving direct answers and claimed ignorance, and at other times put the blame on his subordinates.

Carvajal, a 30-year BOP veteran who has led the bureau since February 2020, announced in January that he would resign amid reports of corruption and abuse at BOP facilities around the country, in addition to complaints over the bureau’s handling of the Covid-19 pandemic. On July 12, Attorney General Merrick Garland announced that Colette Peters, director of the Oregon Department of Corrections, would take over as BOP director. Peters will be sworn in on August 2.

“The investigation has revealed that gross misconduct persisted at this prison for at least nine years, and that much of the damning information revealing misconduct, abuse, and corruption was known to BOP and accessible to BOP leadership during that period,” Ossoff said during Tuesday’s hearing. The committee detailed internal reports written by BOP staff repeatedly warning about misconduct and other potential civil rights violations at the facility, which went unaddressed by senior officials.

Carvajal said Tuesday that he had not been aware of issues at the facility until the summer of 2021 and immediately took “appropriate actions” beginning that July, including temporarily closing housing units and removing the warden, associate warden, and the entire management team. He called for additional funding to BOP for approximately $2 billion in necessary repairs throughout the bureau. (BOP receives an average of $95 million annually for modernization and repair projects.)

“Respectfully, Director Carvajal, you’re continuing to drive responsibility down the chain of command,” Ossoff said. “You spend two years as the assistant director of correctional services, in your words, responsible for implementing policies and procedures at the national level. You’re then the director of the Bureau of Prisons. And you haven’t familiarized yourself with any of these issues. You were unaware of any issues at USP Atlanta. It’s clearly your most troubled facility. You were ignorant of these problems until the middle of 2021. That’s your testimony today?”

“Senator, things like that, because of the delineation of authority, wouldn’t normally rise to my level. We have a chain of command and procedures that were followed,” Carvajal replied. Ossoff interrupted: “So yes, you were ignorant of this until [the] middle of 2021?”

“It was obvious that there was a breakdown that did not reach my level,” Carvajal said. “And that is why we took the action that we took. There is a delineation of authority, and we trust people — these are senior executive service people at the highest level who have that responsibility. We have very good policies, senator, when they’re followed. The breakdown here is that people consciously chose not to follow the policy.” 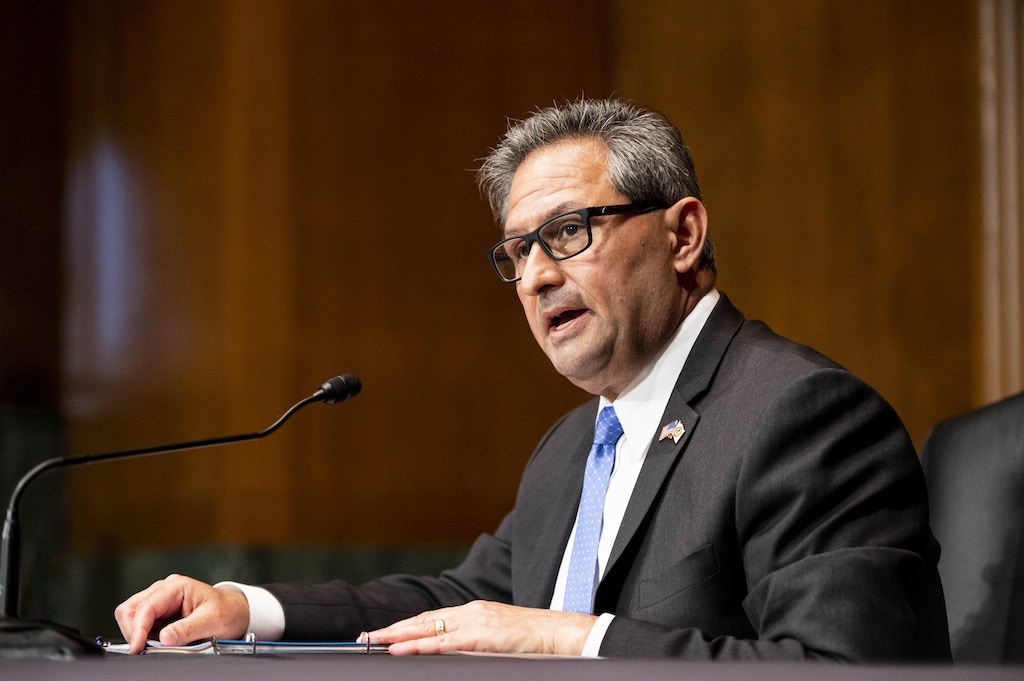 Michael Carvajal, director of the federal Bureau of Prisons, testifies on April 15, 2021.

The findings presented at Tuesday’s hearing came from thousands of pages of internal BOP documents and dozens of interviews with current and former BOP staff, whistleblowers, federal judges and defenders, and former senior BOP leaders.

An August 2020 security assessment by the BOP Central Office, obtained by the Permanent Subcommittee on Investigations and referenced in reporting in late 2021, found pervasive and extensive security failures — including inside the facility — and identified USP Atlanta as a security threat to Atlanta and the southeast region of the U.S. Carvajal testified that he had not seen the security assessment and said that “normally would not rise to my level.”

Federal prisons and detention facilities have a long and documented history of abuse, neglect, and violation of constitutional rights reported by detainees, staff, and current and former officials. The Covid-19 pandemic brought renewed attention to deteriorating conditions inside jails and prisons across the U.S. that have persisted for decades, but received more media coverage as the number of infections and deaths from the virus spiked in 2020. But federal officials have known about ongoing patterns of gross misconduct since well before the pandemic, according to the subcommittee investigation.

At least six people detained at USP Atlanta died by suicide during the tenure of the facility’s former chief psychologist, Erika Ramirez, who is now BOP chief psychologist at FCI Seagoville in Texas. Ramirez worked at the Atlanta facility from 2018 to 2021, when she was involuntarily transferred to the Texas facility as part of what she described as illegal retaliation for reporting “ongoing and uncorrected gross mismanagement of suicide prevention practices which I believe were allowing needless inmate suicides to happen,” she testified Tuesday.

“To put this into perspective, federal prisons typically see between one and three suicides over a five-year period,” Ramirez said. “Any loss of life is tragic and unacceptable, which is why it is particularly devastating to see such disregard for human life at USP Atlanta.”

Testimony from Ramirez and another retired BOP official, Terri Whitehead, former jail administrator at USP Atlanta, detailed unsanitary and inhumane conditions, neglect of suicide prevention efforts, and retaliation for their efforts to report them. Carvajal said he visited the facility in April and observed that staff were addressing issues. He said that as a result of corrective actions taken by BOP, the facility had “increased staff training; enhanced security measures, internal controls; improved internal auditing, and strengthened inmate and staff accountability.”

Whitehead started working at the Atlanta facility in August 2020 and retired in December, earlier than she had planned. She testified that during her time at USP Atlanta, “there were so many rats inside the facility, dining hall, and food preparation areas, that staff intentionally left doors open so that the many stray cats that hung around the prison could catch the rats. It is never a good idea to leave prison doors open.” The facility had no professional pest control service in place, Whitehead said, “because management officials could not work together and determine which departmental budget was responsible for the cost.”

Ossoff entered into the record a January letter obtained by the committee written from federal Judge Timothy C. Batten, chief judge at the U.S. District Court for the Northern District of Georgia, to the warden at USP Atlanta. In it, the judge asked for answers regarding conditions at the facility’s jail, which holds people pretrial, “with respect to reports of rats in the building; roaches in the food; poor nutrition and emaciation of inmates; lack of access to hygiene products; lack of access to medication; lack of access to mail, limited access to tooth brush and toothpaste; no change of clothes for several weeks; a month of 24-hour solitary confinement with only a bible for entertainment or reading; a week, as you mentioned, with only a paper jumpsuit and paper blankets for an inmate on suicide watch without mental health treatment; only being permitted 15 minutes out of a cell every day to bathe, make phone calls, and use the library; blockage of written and other communications between attorney and client; difficulty arranging interview between inmate and psychologist.”

Carvajal told Ossoff he had not been aware of Batten’s letter until Tuesday’s hearing.

Carvajal testified that the bureau “continually strive[s]” to improve suicide prevention efforts, and that the rate of suicide by people detained by BOP “historically run lower than those of the general public.” He was BOP’s assistant director for correctional programs from August 2018 to February 2020, when he was named director. During that time, he received reports investigating each suicide at the facility. Ossoff repeatedly asked if Carvajal was aware of the issues at the facility prior to 2021 — including reports he received directly via email.

Carvajal said he wasn’t “aware specifically” of each individual issue, but he claimed he had reviewed the reports on investigations into the suicides and took appropriate action. He repeatedly blamed his ignorance of issues at USP Atlanta on the sprawling bureaucracy at BOP, siloing of top officials, and a failure of other staff and senior officials to follow policies for documenting and reporting misconduct and neglect.

Later in the hearing, Carvajal acknowledged that he had not taken appropriate action to address known issues at the facility.

“You took no action, and the buck stops with you, correct?” Ossoff asked. Carvajal responded: “Correct.”