Experts cautiously praise the 36-page blueprint but stress its success or failure will depend on how it is implemented. 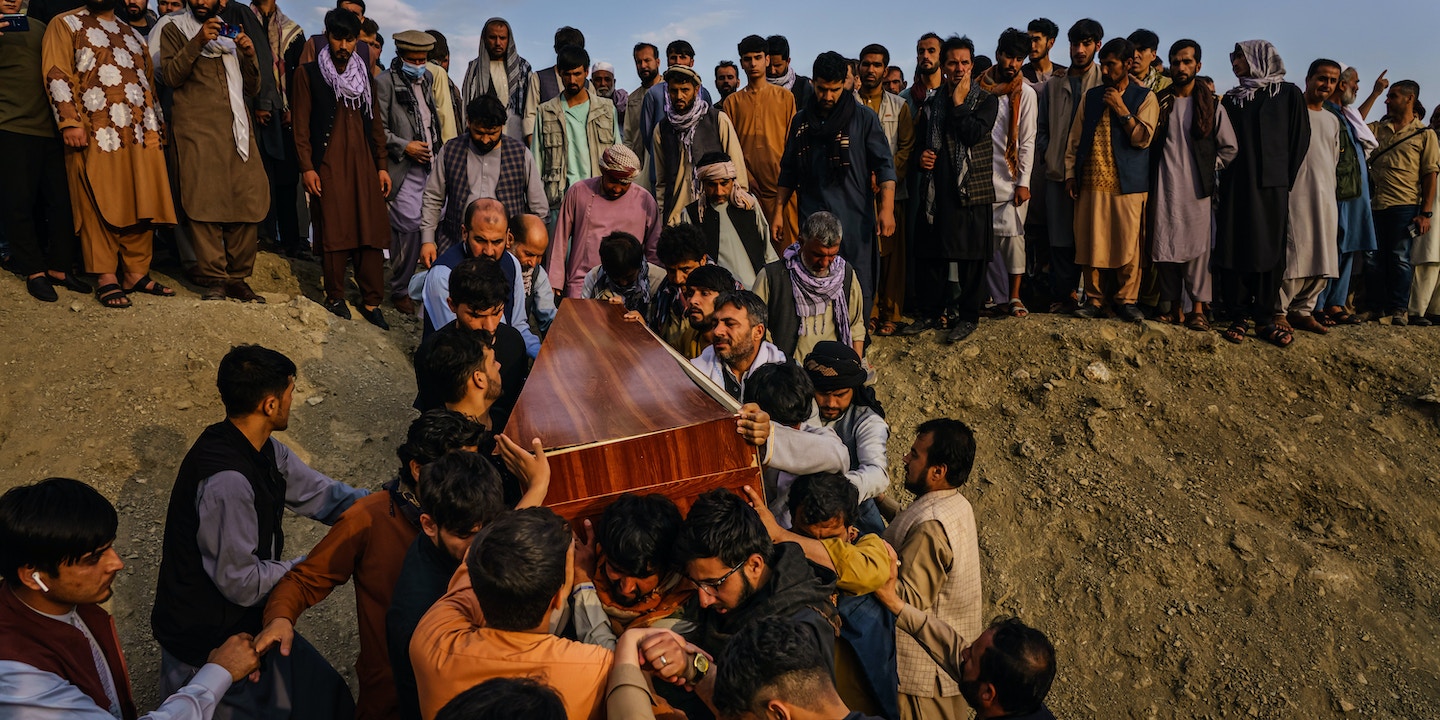 After more than two decades of wars and interventions that have killed an estimated 387,000 noncombatants, the Department of Defense has finally unveiled a comprehensive plan for preventing, mitigating, and responding to civilian casualties.

The 36-page Civilian Harm Mitigation and Response Action Plan, or CHMR-AP — written at the direction of Secretary of Defense Lloyd Austin — provides a blueprint for improving how the Pentagon addresses civilian harm. The plan requires military personnel to consider potential harm to civilians in any airstrike, ground raid, or other type of combat. It also signals a more nuanced understanding that civilian harm extends beyond the deaths of innocents and may be far more connected with two decades of U.S. military defeats and stalemates than the Pentagon has previously admitted.

“Protecting civilians from harm in connection with military operations is not only a moral imperative, it is also critical to achieving long-term success on the battlefield,” reads the CHMR-AP. “Hard-earned tactical and operational successes may ultimately end in strategic failure if care is not taken to protect the civilian environment as much as the situation allows including the civilian population and the personnel, organizations, resources, infrastructure, essential services, and systems on which civilian life depends.”

Experts have offered cautious praise of the new plan, which is scheduled to be phased in over the next several years and fully operative in 2025, stressing that how the CHMR-AP is ultimately implemented will be the key to its success — or failure.

“After almost 20 years of pushing the Pentagon to address civilian harm properly and being disappointed, I’m wholly impressed with how robust this plan appears to be. The team working on it clearly sees the problem and rolled up their sleeves to find fixes,” said Sarah Holewinski Yager, a former senior adviser on human rights to the chair of the Joint Chiefs of Staff and now the Washington director at Human Rights Watch. “It’s fairly bureaucratic — lots of boring process and staffing details — but that’s exactly what has always needed to happen. I won’t celebrate until the plan is implemented, because that’s where we’ll see if this is about real change.”

According to Marc Garlasco, once the chief of high-value targeting at the Pentagon and now the military adviser for PAX, a Dutch civilian protection organization, “This is the first time in the history of the U.S. military that it will have a DOD-wide standard for civilian harm. This is incredibly significant. It puts the military on notice that they must implement these mandates because now they are going to be part of military doctrine.”

The CHMR-AP consists of 11 key objectives, including the incorporation of guidance for addressing civilian casualties into strategy, doctrine, plans, military education, and training; improving knowledge of the civilian environment throughout the targeting process; integrating measures to mitigate risks of target misidentification; developing standardized processes for collecting and learning from data related to civilian harm; reviewing Defense Department guidance on civilian casualties, including condolence payments and public acknowledgment; establishing civilian harm mitigation into programs to train and equip foreign allies and in multinational operations; and establishing a Civilian Protection Center of Excellence to advance the study of civilian harm prevention, mitigation, and response.

“We will integrate CHMR considerations throughout our decision making in a manner that informs how we plan and conduct operations,” Austin wrote in a memorandum accompanying the plan, using military jargon for nation-states like Russia and China, which not only conduct air, land, and sea combat but also space and cyber operations. “Importantly this plan is scalable and relevant to both counterterrorism operations and large-scale conflicts against peer adversaries.”

The release of the CHMR-AP comes as the Biden administration has recently ramped up its undeclared wars in Somalia and Syria. Today, for example, the U.S. announced that airstrikes by attack helicopters and fixed-wing gunships, as well as artillery fire, killed four “Iran-affiliated militants” in northeast Syria. Last Sunday, the U.S. conducted an airstrike that reportedly killed “13 al-Shabaab terrorists” near Teedaan, Somalia. U.S. Africa Command announced that “no civilians were injured or killed,” stressing that it takes “great measures to prevent civilian casualties.”

Such statements are standard operating procedure, but from Libya to Somalia, Syria to Yemen, the U.S. military regularly undercounts civilian casualties, according to victims’ family members, investigative journalists, members of Congress, and watchdog groups that independently investigate claims.

The CHMR-AP mentions the creation of “guidance for applying the ‘more likely than not’ standard when assessing civilian harm.” If implemented, this would represent a sea change from a long-standing U.S. military mistrust of reports by survivors, witnesses, journalists, and humanitarian organizations.

The U.S. has conducted more than 91,000 airstrikes across seven major conflict zones and killed as many as 48,308 civilians, according to a 2021 analysis by Airwars, a U.K.-based airstrike monitoring group. For years, exposés by journalists and NGOs have been necessary to push the Defense Department to reinvestigate attacks and, in extremely limited instances, acknowledge killing civilians.

Last year, for example, a New York Times investigation forced the Pentagon to admit that a “righteous strike” against a terrorist target in Kabul, Afghanistan, actually killed 10 civilians, seven of them children. Times reporting also exposed a 2019 airstrike in Baghuz, Syria, that killed up to 64 noncombatants and was obscured through a multilayered cover-up. And a blockbuster investigation of U.S.-led airstrikes, combining shoe-leather journalism and U.S. military documents, revealed that the air war in Iraq and Syria was marked by flawed intelligence and inaccurate targeting, resulting in the deaths of thousands of innocents.

In the wake of the Times reporting, which won a Pulitzer Prize, Austin called mitigating and responding to allegations of civilian harm a “strategic and moral imperative” and directed subordinates to present him the CHMR-AP within 90 days. The Pentagon did not respond to The Intercept’s questions as to why the plan was released four months after that deadline.

Executing the new plan will reportedly cost tens of millions of dollars per year, some of which the Pentagon intends to request as new funding from Congress, and lead to 150 new positions within the department, including about 30 in the Civilian Protection Center of Excellence. “The CP CoE will regularly review whether past recommendations and lessons learned are still in effect and whether they are still having their intended effects,” reads the action plan.

The CHMR-AP is, experts said, light on the question of accountability. This is in keeping with Austin’s reluctance to examine past U.S. failures to safeguard the lives of civilians. Earlier this year, Rep. Sara Jacobs, D-Calif., asked whether the Defense Department was planning to revisit civilian harm allegations for cases in which new evidence has come to light. “At this point,” Austin replied, “we don’t have an intent to relitigate cases.”

“There doesn’t appear to be a backward-looking function to see where and when and how civilian harm got overlooked in the past.”

A Pentagon investigation of the Baghuz attack, released in May, found that the military’s initial review was botched at multiple levels of command but that military officials did not violate the laws of war, deliberately conceal civilian casualties, or warrant any disciplinary action. While the CHMR-AP states that it “will enhance DoD’s ability to identify instances where institutional or individual accountability may be appropriate for violations of DoD CHMR policies and applicable law,” it’s not clear that the plan will make a material difference.

“There are also a few gaps from my initial reading of the plan,” said Holewinski Yager, “including that there doesn’t appear to be a backward-looking function to see where and when and how civilian harm got overlooked in the past.”

Garlasco keyed in on the same issue, noting that accountability “covers a spectrum of issues that don’t rise to the level of war crimes, including making improvements to tactics, techniques, and procedures.” NGOs, he stressed, “aren’t looking to throw people to The Hague but want to have open, honest discussions of what the various accountability mechanisms should be when civilian harm does occur.”

Garlasco was cautiously optimistic about the CHMR-AP. If properly funded and implemented, it will have a major impact, he believes. “It will make the protection of civilians a component of U.S. military operations,” he said. “It will save lives.” He stressed that it did not mean that civilians won’t die in America’s wars, nor that it’s a panacea in terms of civilian harm.

“The DOD treats civilian casualties as a ‘process problem,’ and this plan does a very good job addressing a number of problems within the process of targeting and the civilian casualties that result from that application of force,” Garlasco said. “But as long as the U.S. continues to solve its problems with the application of military force — particularly high explosives — civilians will still die. That’s the root problem — that we continue to solve problems by dropping bombs on people.”