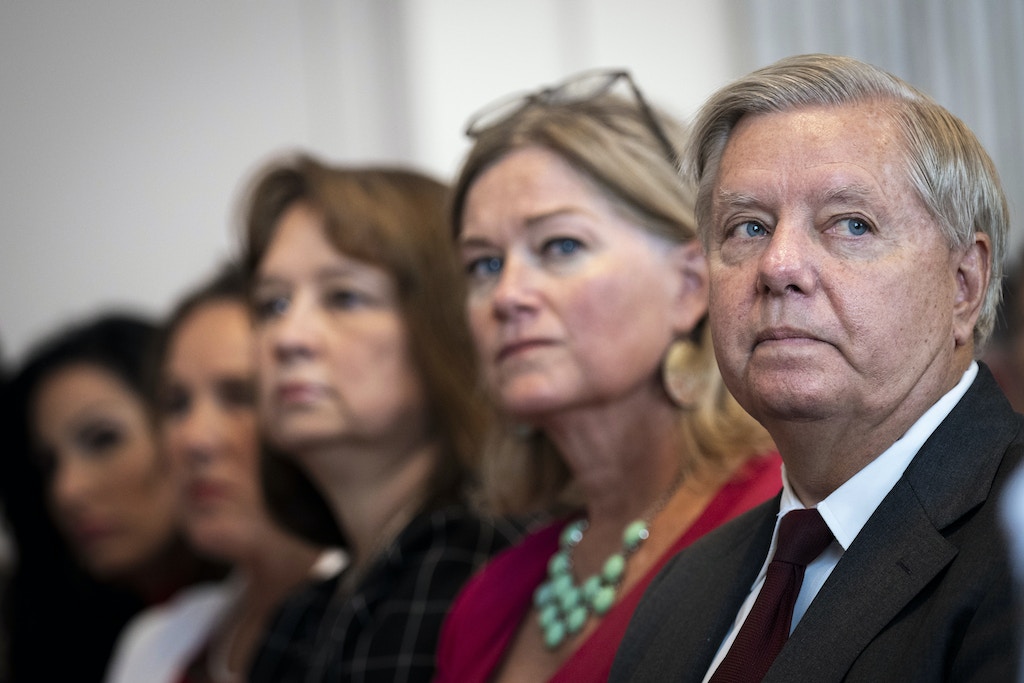 On Tuesday, South Carolina Republican Sen. Lindsey Graham announced plans for a federal abortion ban. Anyone who has paid even marginal attention to the right’s long assault on reproductive justice expected this move. This was never about states’ rights; a nationwide ban, a mass criminalization program, was always the plan.

Graham held a press conference with anti-abortion leaders to announce the introduction of the “Protecting Pain-Capable Unborn Children from Late-Term Abortions Act” — a 15-week ban, aligned with the current restrictive legal status quo in post-Roe v. Wade Florida. The bill’s title toes a delicate line for Republicans, signaling the developing GOP approach when it comes to achieving the unpopular goal of banning abortion nationally but couching it in qualified language to not alienate voters in the midterms who would oppose a total ban.

Graham’s proposal would ban all abortions after 15 weeks with very few exceptions, beyond risk to the mother’s life and cases of rape or incest, applicable only after fulfilling typically burdensome reporting requirements. Contrary to several spurious claims in the bill’s text, 15 weeks is an arbitrary time frame, denoting nothing particular about fetal growth or experience. The ban would, however, serve its purpose of ensuring a far greater number of enforced births and criminalizing medical care.

This is not an effort to regulate already rare “late-term abortions.” If “late-term,” which is not a medical term but a political contrivance, conjures images of almost-babies, it is misleading to the extreme when applied to a 15-week ban. Fetal viability — another slippery concept — is not considered to occur until around 24 weeks. Graham has previously introduced bills using the same “late-term” vocabulary, but those consistently sought to ban abortion nationally from 20 weeks.

The stand against forced birth should have no caveats.

Congressional Republicans are threading the needle. They — and their most fervent Christo-nationalist supporters — have a clear desire to decimate women and pregnant people’s bodily autonomy, but after seeing the backlash to their support for overturning Roe, they also harbor a fear of losing votes by revealing a hard-line stance.

Graham himself has little to lose come November; he is not up for reelection until 2027. His proposed abortion ban is, however, reflective of what the GOP can try to present as a compromise. It should, of course, be rejected as such. Reproductive freedom should not be a question of compromise to protect just some abortions. The stand against forced birth should have no caveats.

A 15-week ban is highly restrictive. It will prove deadly and immiserating for many thousands of people, particularly Black women, who are over three times more likely to die from a pregnancy-related cause than white women.

Most red states, especially since the fall of Roe, already have abortion bans at least as harsh as those Graham is proposing, like the vigilante-enforced abortion bans in Oklahoma and Texas. Graham’s bill, were it to pass into law, would primarily alter laws in states where abortion remains protected. Yet the existence of draconian bans from six weeks or, as in the case of Oklahoma, the moment of fertilization should not render a 15-week ban acceptable.

Republicans, while comfortable enforcing Christo-nationalist minority rule, are aware that support for abortion rights could severely hurt them in the midterm elections. Opposition to the Supreme Court’s Dobbs v. Jackson Women’s Health Organization decision overturning Roe is one of the only galvanizing forces likely to stop a red wave come November.

The ballot victory to keep abortion protections in the state constitution of deep-red Kansas, for instance, sent a clear message: Voters might not like the Democrats, but they like abortion access. Several GOP candidates, like the fascistic Blake Masters in Arizona, have since scrubbed hard-line anti-abortion messaging from their campaign websites.

The Republican gambit rests on the assumption that while total abortion bans are unpopular, many potential voters are comfortable with some form of regulation around the procedure. The fact that the Democratic mainstream has spent three decades defending abortion only as an unfortunate, rare necessity — rather than the social good that it is — has no doubt served the current Republican calculus. In response, we must continue to reject the criminalization of abortion in any form.

Even if Republicans win the Senate in November, Graham’s bill is highly unlikely to pass. With the filibuster in place, it would require 60 votes to overcome a procedural hurdle. And when Graham proposed 20-week national abortion bans while the GOP controlled both Congress and the White House, he was unable to get the legislation passed.

The long odds of Graham’s effort should not serve as a reason for inaction on the part of Democrats in Congress or in Democratic-led legislatures. Republicans continue to make clear that their successful assault on abortion rights is far from complete.

It remains the order of the day to strengthen and codify state law protections where they exist and, crucially, to throw our support behind those on the front lines in abortion-ban states.

Our rejection of bans like Graham’s should not be solely situated in their being misleadingly labeled. Even if it were truly a “late-term” abortion ban, it would be unacceptable. Whether at six, 15, or 20 weeks, or much further along in the gestational process, there can be no space in reproductive justice for criminalization.