Pennsylvania Republicans have fought Philadelphia’s reform DA since his first election. Now, some Democrats are falling in line to oust him. 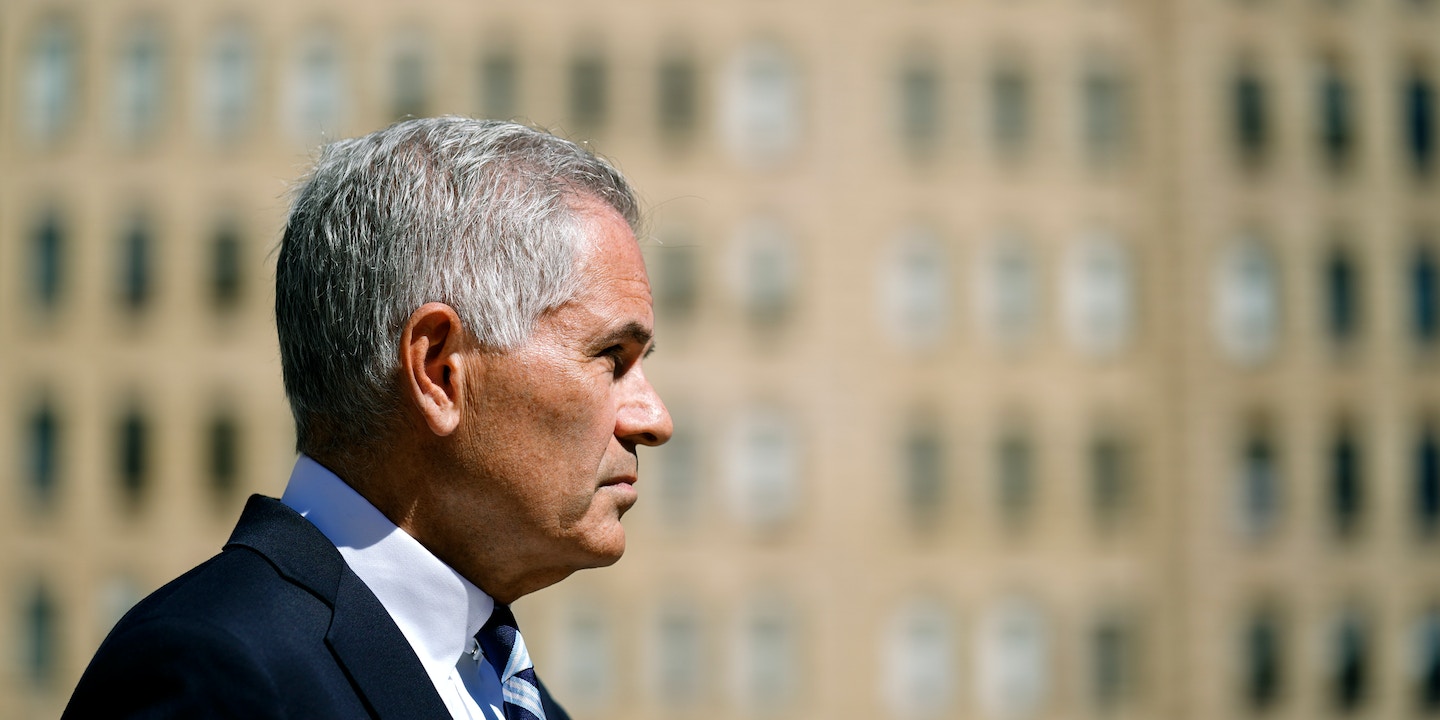 Jeffrey Thomas, the Republican district attorney of southwestern Pennsylvania’s Somerset County, spent the night of April 25, 2022, in jail. After another person reported that they had seen him punching his wife in the head on FaceTime the previous May — an allegation the DA and his wife both deny — Thomas was charged with simple assault in a case pending trial. Two months later and 200 miles east, Republicans in the Pennsylvania General Assembly passed a resolution to convene a Select Committee on Restoring Law and Order and used its authority to subpoena a Pennsylvania district attorney: Philadelphia-based reformer Larry Krasner.

Krasner’s crime — according to Republicans, conservative Democrats, and police, who worked together to try to oust him last year — is an increase in the crimes of others: When homicides spiked in 2020, impacting Philadelphia, rural parts of the state, and many communities across the country, they blamed Krasner’s reform policies. As DA, Krasner has focused on prosecuting violent offenses and diverting people from incarceration. Less than a year ago, Philadelphia voters overwhelmingly reelected him.

On Friday, Pennsylvania lawmakers proceeded with the second day of impeachment hearings for Krasner, who, in August, refused to comply with a subpoena requesting that he turn over information on how he prosecutes certain crimes. The subpoena, Krasner argued, “repudiate[d] the law of this Commonwealth,” served “no valid legislative purpose,” violated the separation of powers, and requested that his office produce privileged documents. Earlier this month, a bipartisan consensus in Pennsylvania’s state legislature voted overwhelmingly to hold him in contempt.

Leading the impeachment charge are state lawmakers who represent districts hundreds of miles away from Philadelphia. The champions of the cause are Republicans, who have taken aim at the Democratic DA for implementing progressive reform policies since day one. Democratic lawmakers, meanwhile, have taken no such action against the Republican Somerset County DA — who, in addition the simple assault charge, is also under house arrest awaiting trial for allegedly raping and strangling a woman last year, and is now temporarily suspended from his job and from practicing law, but retains his seat — and instead have fallen in line with their Republican colleagues. When the vote came up on September 13, in a body with 89 Democrats and 113 Republicans, members voted 162 to 38 to hold Krasner in contempt.

The focus on Krasner has continued to sharpen as Republicans solidify a national strategy to attack Democrats on crime, with an emphasis on targeting democratically elected reformist prosecutors. But in an assembly where almost 90 Democrats could have taken a stand — albeit a symbolic one — for progressive reform, why did the right-wing push pass so handily?

Republican state Rep. Josh Kail, who represents a southwestern district outside of Pittsburgh and is leading midterm campaign efforts for the state House Republicans, is widely seen as the leader of the impeachment charge. But according to seven sources — including several Democratic state lawmakers and political operatives with knowledge of the process — who spoke to The Intercept and requested anonymity for fear of professional reprisal, Kail had help from Democratic state Rep. Jordan Harris, who was elected Democratic whip in 2018. The sources say that Harris whipped Democratic members who hold seats seen as vulnerable in the upcoming November midterm elections, when Pennsylvania Democrats seek to win the governorship, control of both legislative chambers, and a seat in the U.S. Senate.

Along with four of the five other members of House Democratic leadership, Harris voted against the contempt measure, putting his own vote at odds with the position he is said to have pushed, according to the seven sources.

“Part of my job as the Whip is having conversations with members about their votes, and as I do with every vote, I made myself and my staff available to members who had concerns about the resolution,” Harris told The Intercept. He said he would not comment on internal caucus deliberations.

The committee currently searching for legal grounds to impeach Krasner held hearings on Thursday and Friday in Philadelphia’s Navy Yard, a location that some critics have described as purposely inaccessible to most of the city’s residents.

“It is especially troubling that this committee, which is trying to undo the results of an election in Philly, picked a location that is extremely hard to get to for ordinary Philadelphians and a time where most people are at work,” said Krasner spokesperson Jessica Brand, who also leads the Wren Collective, a firm that advised reform-minded prosecutors. “One might speculate that this was an intentional attempt to keep people away as the committee tries to undercut democracy.” Krasner himself has not been invited to attend the hearings.

“There’s been other DAs that have been brought up [on charges] for things and we’ve heard about them,” said Democratic state Rep. Stephen Kinsey, who represents a part of north Philadelphia with high instances of gun violence. But, he said of Pennsylvania Republicans, “this majority party has turned a blind eye.”

The same Republicans in far-flung parts of the state have repeatedly decried gun violence in Philadelphia while voting to gut gun control bills in the General Assembly.

GOP ire toward Krasner’s reform efforts — like implementing diversion programs for certain first-time nonviolent gun possession cases — has consumed a significant amount of state legislative time and threatens to take more, as the Republicans who control the General Assembly try to fast-track impeachment efforts before November. The same Republicans in far-flung parts of the state have repeatedly decried gun violence in Philadelphia while voting to gut gun control bills in the General Assembly. State lawmakers have similarly sought to undermine Krasner’s prosecutorial authority since he took office in 2018.

Harris said the timing is “convenient … for Republicans weeks before an election. This is the path the majority has taken to try and solve gun violence in Philadelphia while widely supported gun safety measures don’t receive a vote. We could’ve debated them in Harrisburg but the Republican majorities are more interested in this than doing the real work required to assist in restoring peace and safety to our communities.”

The overwhelmingly successful contempt vote, for which members had only a few hours’ notice, was held on the same day as the city’s first murder trial of an on-duty cop, whom Krasner had charged in October 2020 for the 2017 killing of a young Black man, 25-year-old Dennis Plowden. Krasner’s office has pursued police accountability and drawn fire from police and their union throughout his time in office.

Only two officials have ever been impeached in Pennsylvania, where the bar for impeaching a DA has historically been high.

“I don’t think that there’s any such comparison,” said state Rep. Summer Lee, the Democratic congressional nominee for Pennsylvania’s 12th District. “But these political times are so incendiary in that false equivalencies are so prevalent when it comes to the media putting out information,” Lee said, referencing the first impeachment of former President Donald Trump.

Three Democrats who voted for the contempt measure said they did so because they wanted to show consistency in their treatment of legislative subpoena power following the impeachment inquiry against Trump, not because they believe there is evidence of an impeachable offense by Krasner. Four other Democratic lawmakers, who showed mixed support for the contempt measure, said they were confident that not all Democrats who voted in its favor would automatically vote to remove him from office, should the impeachment committee produce official articles.

“This is a very slippery slope to impeach.”

“This is a very slippery slope to impeach,” said Democratic state Rep. Ed Neilson, who voted for the contempt measure and in favor of forming the impeachment committee. Neilson, who represents part of Far Northeast Philadelphia, said he voted for the measure because state lawmakers have the right to subpoena Krasner, not because he thinks there are necessarily grounds for impeachment.

Pennsylvania Attorney General Josh Shapiro, also the state’s Democratic gubernatorial nominee, has not commented publicly on the attacks against Krasner. The two officials’ offices have worked closely on some issues, like prosecution of gun crimes, and have butted heads on others. In 2019, employees in Shapiro’s office emailed the Philadelphia Inquirer asking for them to pursue more critical coverage of Krasner.

That year, state lawmakers voted to strip Krasner’s prosecutorial authority by giving Shapiro’s office the power to prosecute gun crimes in Philadelphia, and Shapiro came out against the law in response to pressure from protesters. His office declined to comment on the impeachment effort and referred questions to his campaign, which did not respond to The Intercept’s request for comment.

Leading up to the midterm elections, Pennsylvania Democrats at the national and local level are facing concerted Republican attacks against the same criminal justice reform efforts that first buoyed the popularity of officials like Krasner and Lt. Gov. and Democratic Senate nominee John Fetterman. While Fetterman’s campaign dominated the Democratic primary and has launched viral attacks on his Republican opponent, the former talk-show doctor and prominent millionaire Mehmet Oz, Fetterman has slipped in some recent polls. Oz and his Republican operatives have run ads attacking Fetterman’s work on clemency as head of the state board of pardons.

In Pennsylvania and elsewhere, Democrats forced to respond to the very real gun violence in their districts have ceded ideological ground and political power by embracing tough-on-crime narratives without leverage to legislate a solution. The Krasner impeachment attempt follows the successful recall of DA Chesa Boudin in San Francisco, Florida Gov. Ron DeSantis’s suspension of a state attorney who refused to prosecute women for seeking abortions in Tampa, and two failed attempts to recall DA George Gascón in Los Angeles.

While he’s not a fan of Krasner, Neilson said, “I’m also not a big fan of impeaching everybody that does something you don’t like. … Better be careful where we go because it could be one of them next.”