A Teddy Roosevelt mascot for the Washington Nationals loomed over attendees at the Salt Line.

The loge boxes of Nationals Park were dark Thursday night, but Washington, D.C.’s, Navy Yard — a demented maze of New American eateries, self-service watering holes, and overpriced sports bars generously dubbed a “neighborhood” by Politico in 2018 — was still heavy with the reek of stale beer and schmoozing. I made my way past a poorly attended open-air concert, featuring the country musings of Ryan Hurd under a neon sign for Booz Allen Hamilton, toward one such New American restaurant, the Salt Line, on the choppy waters of the Anacostia.

I’d generously been forwarded an invitation to the S-3 Group’s 11th anniversary celebration emblazoned with “Do Not Forward,” and bypassed the door check with a brisk walk and a serious phone call with a cousin about his plans for Eritrean crypto arbitrage. It seemed too easy given the hundreds of thousands of dollars S-3 takes from “security”-related firms like Innovative Defense Technologies, Raytheon, and the National Rifle Association.

Founded as a Republican-aligned lobbying firm in 2011, S-3 has expanded both its size and temperament to include former Democratic staffers from across the political spectrum, a full service public relations shop, and clients spanning labor unions, defense contractors, foreign governments, and fossil fuel giants. Public rivals clasped hands on the waterfront and ante’d up business cards in anticipation of a coming congressional shakedown in D.C.

I was two hours late. Past the entry gate, an empty half-shell buffet leaked brackish fluids, picked clean like a whale corpse on the floor of the abyssal zone. I ordered the first Bud Light of the night from a downcast server and noticed Michael Long, who — having recently departed a 14-year long stint for House Speaker Nancy Pelosi — flitted between staffers and reps from both parties in his new role as S-3 principal. 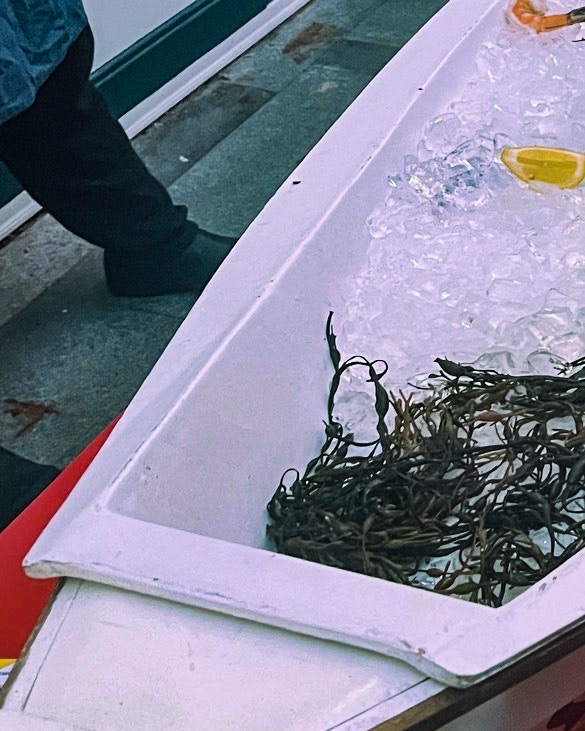 A rather rough cellphone photograph of the mostly empty shellfish raft at the S-3 Group 11th anniversary celebration.

I also spotted Rep. Rodney Davis, R-Ill., weaving and bobbing in the throng of suits, doing a good deal of eager handshaking after a 14-point primary loss in Illinois’s redrawn 15th District. Davis was bested by the Trump-backed Rep. Mary Miller turned overnight sensation after her declaration that the Supreme Court decision reversing Roe v. Wade was a “historic victory for white life.” It should have been humiliating, given S-3’s work for Trump-aligned Republicans, but on K Street, losers can be winners too.

I was hoping for a speech from one of the founders, maybe a slammed toast, but before I could ask if I missed it, I was approached by Shon Tester, who quickly informed me that he is in fact a senator’s son. His face soured at the requisite Creedence Clearwater joke. He was outfitted in a TikTokker haircut, camo fatigues, and what looked like Jordans.

“It’s planting season,” he said by way of explanation for the absence of his father. (It’s harvest season, but close enough.) “We are farmers,” he said. Hell, so am I: My “chosen” family has 40 acres of hemp and vegetables in Massachusetts, and I was wearing the bolo tie to prove it. But after two more cans of domestic, I learned I was badly mistaken: My farm is not what I once believed it to be.

“Our family and everybody around us are millionaires,” Tester Jr. says. “That’s because we’ve been farming for over 100 years. Under 60 acres, that’s not a farm. That’s a feedlot.” I remind Tester that there are some small farmers in his father’s state of Montana that would probably feel differently, with all due respect. He laughs, “If this whole politics thing doesn’t work out, well, I’m putting away some savings.” In 2018, when Democratic Sen. Jon Tester last ran for reelection, he ranked as the No. 1 recipient of lobbyist cash.

I asked how often Shon drives the combine and was curtly informed that he can operate every machine on the farm. Older, sinister gentlemen started careening over, asking questions about just what exactly the billionaire-backed media “conglomerate” I work for does, whether it owns — or works for — S-3, and is it hiring? I excused myself to the restroom where Bob Marley’s “One Love” played over loudspeakers.

Back outside, S-3’s willingness to play both sides and take money from any group with cash to burn was making it hard to know how to begin conversations. Republican Reps. Steve Scalise, Kelly Armstrong, and Jason Smith featured heavily but were balanced out by House Majority Leader Steny Hoyer and the tattered remains of Democrat Joe Crowley’s staff and affiliates, the New York City power broker who was routed by Alexandria Ocasio-Cortez during the 2018 midterm elections. Kevin Casey, one of Crowley’s many right hands, is a principal at the firm. As I reentered the party, Rep. John Moolenaar, R-Mich., of the House Appropriations Committee — and S-3 donation recipient — was summoning a driver to whisk him away. Affiliates of the likes of Uber, McKinsey, and Raytheon hovered around a tower of S-3-branded desserts.

Michaeleen Crowell, another S-3 principal who previously worked as chief of staff for Sen. Bernie Sanders, defended her new trade to The Hill in 2019, saying that “progressives need to have a seat at the table. Being able to discuss policy differences and work collaboratively with those who have any number of political opinions allows me to bridge divides and work toward creative and innovative solutions.” Lobbying disclosures beginning in 2018 show that, in sharp contrast to her former boss’s populist appeal, Crowell has worked toward those creative solutions on behalf of Duke Energy, U.S. Sugar, Sinclair Broadcast Group, Boeing, AMAG Pharmaceuticals, Horizon Therapeutics, Alphabet Inc., the Consumer Brands Association, Alkermes PLC, and the luxury goods brand LVMH Moët Hennessy Louis Vuitton. An Abe Lincoln mascot at the S-3 party in Washington, D.C.

The mascots of long dead presidents descended upon the crowd, on loan from the nearby Nationals Park. Having thrown back a gray-market shroom bar earlier in the night for research on a forthcoming report, I watched as Washington, Roosevelt, and Lincoln leered into view, interrupting a House staffer trying to explain her relationship to a famous bygone journalist, while increasingly distraught colleagues told her to stop talking to me. It seemed like it was time to go.

Martin Luther King III was making a beeline for his ride, flanked by his handler and security guard. Halfway across the street, I asked him what he was doing there. “I wasn’t here to really talk about issues, just to meet some people that I work with,” King told me as his handler tried to stiff-arm me, and we transitioned to the sidewalk.

“The main reason I’m here is because of this lobbying organization S-3 we work with,” he continued. (S-3 has done image management for King and his family.) “But I’m here for the Congressional Black Caucus and to talk about encouraging people to begin a discussion around adding people to the United States Supreme Court. Because I think the court has decided it wants to go against what the majority of the people want to see. So for example, 51 percent of the people now, according to a Marquette University poll, want to see the court expand. So I’m going to be talking about that tomorrow with a number of other panelists at congressman Hank Johnson’s committee.”

According to a former S-3 employee, King’s family recruited the firm to position them “as key thought leaders around issues of racial injustice, including police brutality and voting rights.”

I turned to leave, as a delegation of crypto heads plodded deeper into the party’s maw. Rich people march on Washington every day.