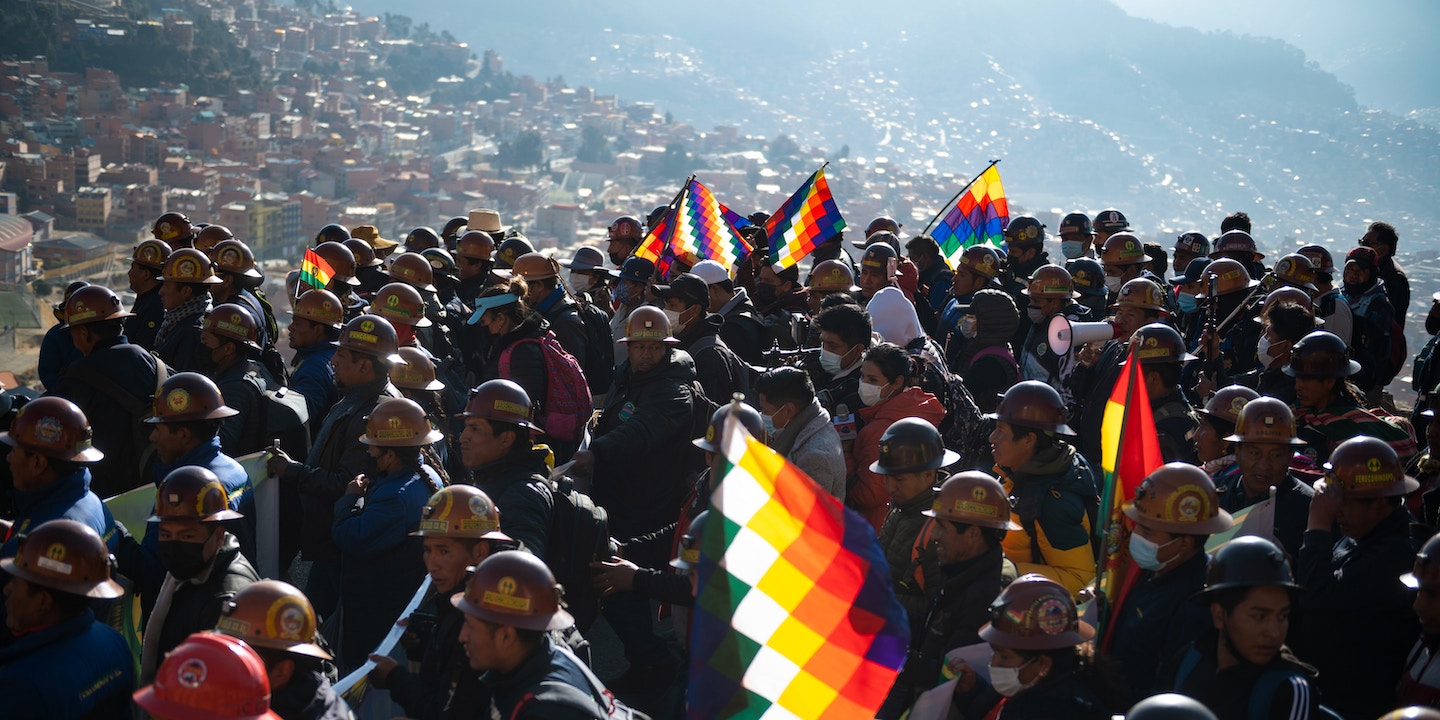 A State Department report obtained by The Intercept shows the Biden administration continuing to embrace claims of electoral fraud that opened the door for a right-wing takeover of the Bolivian government in 2019. Mandated by the most recent omnibus spending bill, the report delivered to Congress mirrors the posture the Trump administration pushed three years ago, when it sought to cement the replacement of Bolivia’s Indigenous socialist president Evo Morales with the country’s right-wing Christian senator Jeanine Áñez.

The report relies almost entirely on the conclusions of the Organization of American States, which found in a November 2019 audit that a “series of willful actions were taken to alter the results” of the election — and which proved key to the coup that followed. The OAS’s initial analysis has since been discredited by multiple statistical models, nonprofit revues, a peer reviewed academic study, and news outlets including the New York Times and the Washington Post, yet continues to be endorsed by the State Department. When the analysis was first published on November 10, 2019, it helped transform street protests into a right-wing seizure of power.

The State Department’s recent report comes as Arturo Murillo, Áñez’s interior minister under the temporary coup regime, filed changes to his plea agreement in a money laundering case in the southern district of Florida. According to the U.S. Justice Department, Murillo and another former official received bribes from three U.S. citizens — also arrested — to obtain a Bolivian government contract for tear gas and other weapons, laundering their bribes through U.S. banks.

Murillo’s efforts ultimately failed, but his party’s far-right agenda upended Bolivian politics. As The Intercept reported last year, even after the 2020 election of Luis Arce restored Movimiento al Socialismo, or MAS, to power, far-right politicians were planning a second coup and attempting to recruit U.S. private mercenaries to carry it out, underscoring the close ties Bolivia’s coup leaders have maintained with U.S. citizens and corporations.

The U.S. government, meanwhile, has maintained a faithful allegiance to the flawed statistical analysis that spurred the first coup. The State Department did not respond to The Intercept’s request for comment.

Though Morales clinched a decisive first-round victory in October 2019, the State Department under both the current and previous presidential administrations has repeatedly cast doubt on the legitimacy of the election. “With the official count underway, internet service was intentionally cut in the count center, including at the TREP,” the report reads, referring to the transmission system that tallied the initial votes. “When internet service was finally restored, the vote count showed Morales poised for a first-round win.”

The State Department’s framing suggests that there was a highly intentional effort to delay the vote count for subversive purposes. But scrutiny of the OAS’s initial report and its later, in-depth audit, combined with an interview from a former member of the Bolivian electoral board, makes clear that the unofficial rapid vote count, Transmisión de Resultados Electorales Preliminares, or TREP, was almost certainly stalled without attempt to alter the course of the election and instead to ensure accurate results.

An analysis of the election and the OAS’s role conducted by the Center for Economic Policy Research found that Ethical Hacking, the company that supplied much of the technical detail for the OAS audit, “investigated the use of the BO1 server during the time in which the TREP was stopped and concluded that ‘there was no alteration of data.’” The company rebuked the notion that the TREP delay was an attempt to alter the course of the election.

In the wake of the OAS audit, Morales was accused of election tampering, ousted by military force, and forced to flee Bolivia for Mexico. Áñez, who proudly represents neo-colonialist values, declared victory after three weeks of civil protests that included violent clashes with security forces. Wielding an enormous Bible in the governmental headquarters, she broadcasted her plans to restore Christian nationalism to Bolivia, seeking to reverse the gains in Indigenous rights that Morales, the country’s first Indigenous president, used as the foundation for his political success.

In the first week of Áñez’s interim presidency, Bolivian forces conducted two mass killings of protesters in the towns of Sacaba and Senkata. Murillo, the coup regime’s interior minister, alleged that the MAS party had killed its own supporters and vowed to prosecute members of the former government. Morales was charged with terrorism and sedition.

The State Department in its report notes “‘grave violations of human rights’ by Bolivian security forces surrounding the election under both the Morales and the Áñez administrations, including illegal detentions, sexual violence, torture, and the killing of 37 people in the towns of Sacaba and Senkata.” Citing a report from a joint group appointed by the Inter-American Commission on Human Rights and the Bolivian government, the State Department says that while “[s]ome of the violations were partly motivated by racial and anti-indigenous elements,” the commission “also found evidence of violence ‘instigated’ by the Morales administration, including abductions and torture of anti-MAS activists.”

As cited by the UN Human Rights Office, the report found that the 2019 “violence had a racial and anti-indigenous character, and that the security forces used excessive or disproportionate force and did not adequately prevent acts of violence.”

This February, the International Criminal Court rejected a plea from the Áñez government to prosecute Morales for the alleged injuries resulting from an August 2020 general strike, launched in protest of her administration’s seizure of power.

In February 2020, just over three months after the OAS completed its audit and Bolivia spiraled into unrest, an MIT analysis found that the initial vote count mirrored the final results and that there was not “a statistically significant difference in the margin before and after the halt of the preliminary vote.” The MIT modeling was so thorough that both the Washington Post and the New York Times publicly revised their prior stances on the Bolivian election.

The State Department, evidently, did not. “The OAS audit team found irregularities in all four electoral processes it examined: the IT system for the TREP and the final results; the chain of custody of electoral materials; the lawfulness and integrity of the results forms; and a statistically improbable tendency in the final 5 percent of results,” reads this month’s report to Congress. It made no mention of the statistical critiques.

“OAS has an outsized influence in the course of events across the southern hemisphere, not just in Bolivia but in Haiti and beyond. This history of controversial interventions is well documented,” David Adler, general coordinator of the Progressive International, told The Intercept. His group helped monitor the 2020 Bolivian elections.

“I think it is clear that the OAS and the Trump administration at the time sensed a real opportunity.”

The Biden administration’s stance, in this respect, mirrors that of its predecessor. “This has been a long-standing complaint of our neighbors south of the border, and I think it is clear that the OAS and the Trump administration at the time sensed a real opportunity,” Adler added. The Trump administration had been so invested in the Bolivian election result, it threatened the MIT researchers with a subpoena to explain how they reached their conclusions.

“We fully support the OAS and Bolivian calls for new elections and a new Electoral Tribunal that can ensure free and fair elections that reflect the will of the Bolivian people,” wrote then-Secretary of State Mike Pompeo in 2019. “We support @JeanineAnez in Bolivia as she works to ensure a peaceful democratic transition through free elections,” tweeted his boss, former President Donald Trump. “We denounce the ongoing violence and those that provoke it both in Bolivia and from afar. The U.S. stands with the people of the region for peace and democracy!”

As part of the 2022 omnibus spending bill, Congress directed the State Department to “submit a report to the Committees on Appropriations evaluating: (1) the transparency and legitimacy of the 2019 Bolivia general elections by soliciting information from independent, internationally recognized experts; and (2) progress in investigations of responsibility for violations of human rights that occurred during that period.” The report could have served as a refutation of the Trump administration’s stance, but instead it largely confirms that posturing.

After MAS returned to power with Arce’s 2020 election, the party began prosecuting coup leaders for human rights violations, terrorism, and corruption during the short-lived regime. In 2021, free from threat of prosecution by the Áñez government, one of the election officials involved in the TREP delay condemned the OAS’s handling of the audit and initial refutation of election results.

The State Department report cites the resignation of this official, vice president of Bolivia’s electoral board Antonio Costas, as another reason to doubt the election results. But Costas has said he resigned due to the overwhelming evidence that Morales’s jump in the polls was legitimate, telling a Bolivian outlet: “The reason why I resigned was because the TREP was interrupted and I said at the time that I did not find any situation that calls attention after the verification that I did. I also stated this to the Observation Mission that I met with two days after my resignation. … I told them: “Look, here is the analysis of almost 14,000 tally sheets, comparing the TREP and the calculation, and I don’t find any big differences that could be relevant.”

A peer-reviewed study in the American Journal of Politics examining the Bolivian election disproved the same claim of election tampering made by Trump during the 2020 presidential elections: namely, that shifts in late-counted votes, like what occurred in Pennsylvania, are a legitimate basis for accusations of fraud and vote manipulation.

While Biden has diligently condemned accusations of election stealing in the U.S., in the case of Bolivia, his administration seems less keen on applying the same standard abroad.

“When late-counted votes delivered a narrow victory for the incumbent, fraud accusations followed — with dramatic political consequences. But we find that the vote-share trend can be explained without invoking fraud and that the allegedly suspicious shift in late-counted votes was actually an artifact of methodological and coding errors on the part of electoral observers,” the study states. And while Biden has diligently condemned accusations of election stealing in the United States, in the case of Bolivia, his administration seems less keen on applying the same standard abroad.

“For decades, the U.S. has understood the OAS as a primary instrument for the maintenance of the Monroe Doctrine,” said Adler. “Morales had been an opponent not just of U.S. domination of Bolivia but of the hemisphere at large, and these questions of fraud and interference in the 2019 election were fertile ground for an OAS-backed political intervention, and so the stars aligned for the U.S. to mobilize.”