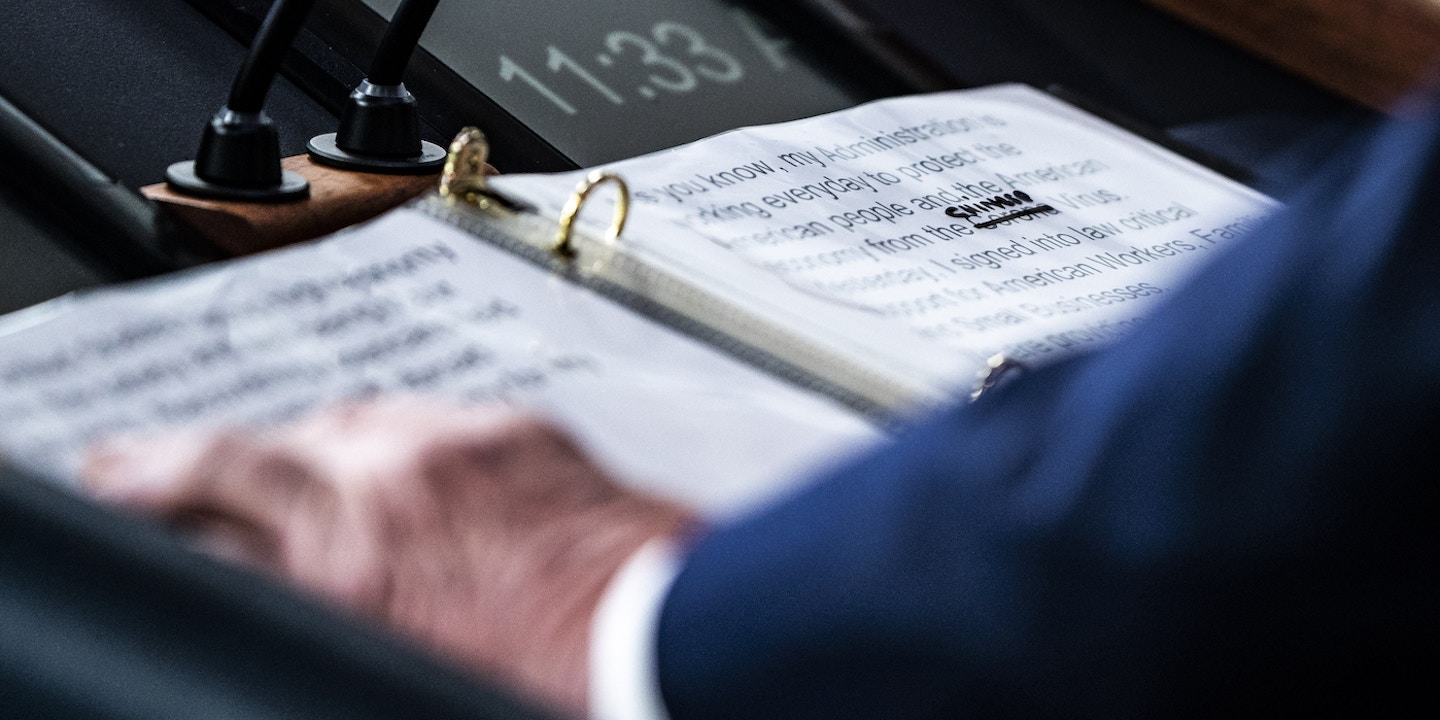 Citizens for Sanity, a shadowy nonprofit run by three former Trump administration officials, has purchased $33 million worth of air time this month to flood airwaves with violent, misleading ads that claim that Democrats are exclusively to blame for a series of lurid crimes caught on surveillance cameras in recent years.

Reporting on the tax-exempt nonprofit’s first wave of ads — which filled the screens of baseball fans with unwelcome images of violence between innings of playoff games — revealed that the Republican operatives responsible for the attacks all work closely with Stephen Miller, the former president’s speechwriter, who has played a key role in promoting the anti-Democrat ad campaign on social media.

The group’s latest ad, posted online Saturday, seeks to rewrite history by blaming President Joe Biden for the sickening rise in racist attacks on Asian Americans since the start of the pandemic, which first spiked in March 2020 when then-President Donald Trump started calling Covid-19 “the Chinese virus” and “the Kung flu.”

The ad, which is provocatively titled, “Why Don’t Asian Lives Matter to Joe Biden and His Left-Wing Allies?” seeks to exploit justifiable outrage over the violence by confronting viewers with distressing images of 17 attacks on Asian Americans since 2020, as a narrator insists that the blame lies with Biden and “left-wing prosecutors who won’t prosecute — liberals freeing predators.”

That language, including the reference to the Black Lives Matter movement, seems to be carefully calibrated to stoke racial resentment between Black and Asian communities by implying that Democrats have enacted criminal justice policies that, according to narration scripted by the former Trump aides, “have allowed deranged criminals to roam free, putting Asians in grave danger.”

But what is missing from the ad is perhaps more revealing than what is in it.

None of the clips of violence are dated, which prevents viewers from knowing that almost all of the crimes were committed either during or shortly after Trump’s presidency. Using the video clips as clues, I was able to find news reports on 16 of the 17 incidents. One of the most shocking assaults, on an 84-year-old Chinese man who was kicked to the pavement from his seated walker in San Francisco, took place when Trump was president, on February 20, 2020. Six other attacks took place less than a month into Biden’s term. At least 12 of the victims shown in the ad were attacked before May 20, 2021, when Biden signed the Covid-19 Hate Crimes Act, federal legislation aimed at combatting the racist attacks, which was introduced by two Asian American Democratic lawmakers, Rep. Grace Meng of New York, and Sen. Mazie Hirono of Hawaii.

In at least one case, an assault on a 91-year-old man who was shoved to the ground in Oakland’s Chinatown on January 31, 2021, the ad makers appear to have zoomed in on the original surveillance camera video so that the part of the date stamp that clearly showed the month is cropped out.

All of the news reports on the violence featured in the ad have also been edited to remove mentions of bigotry triggered by the pandemic and Trump’s rhetoric.

Perhaps most importantly, the ad’s central claim, that criminals who attack Asian Americans are not punished for their crimes, is completely contradicted by news reports on the incidents, which make it clear that in case after case the suspected attackers were in fact arrested and charged, including with hate crimes.

At one point in the ad, as the narrator says “Joe Biden’s soft on crime,” viewers see video that was shared on Twitter by the actress Olivia Munn, who tweeted surveillance camera footage of a friend’s mother, Lee-Lee Chin-Yeung, being assaulted in Queens, New York, on February 16, 2021.

But the suspected attacker, Patrick Mateo, was arrested within three days and was later charged with a hate crime. The victim’s daughter, Maggie Cheng, was a virtual guest for Biden’s 2022 State of the Union address. “My mother was attacked because she is Asian and thanks to the Covid-19 Hate Crimes Act that Rep. Meng wrote, the perpetrator will be held accountable for his crime,” Cheng told a local news site. “I am grateful to both President Biden and Congresswoman Meng for their continued support in protecting Asian Americans across the country and combating anti-Asian hate.”

Of the three attacks featured in the ad that took place in 2022, the most brutal was the beating of a 67-year-old woman of Asian descent in Yonkers, New York, in March. Last month, her attacker pleaded guilty to assault in the first degree as a hate crime. The Wall Street Journal reported that he “will be sentenced in November to 17.5 years in state prison and five years of supervised release as part of his plea agreement.”

Despite those arrests and prosecutions, the wave of racist harassment and attacks has yet to recede.

“Sadly the hate continues,” Russell Jeung, a professor of Asian American studies at San Francisco State University, told ABC News in March. “The hate’s been normalized, with President Trump’s rhetoric. He sort of opened Pandora’s box, that it’s OK to mock and then to attack Asians.”

Jeung launched the website Stop AAPI Hate on March 19, 2020 to track the alarming rise in hate crimes targeting Asian Americans and Pacific Islanders as the pandemic reached the United States. Three days earlier, Trump had referred to the harm caused to Americans by “the Chinese virus” for the first time on Twitter. Writing in the American Journal of Public Health this year, researchers reported evidence that Trump’s tweet had triggered an immediate spike in anti-Asian hate speech online.

On March 18, 2020, as reports of hatred directed at Chinese Americans circulated, Trump dismissed concerns about a White House official who made a racist joke to a Chinese American reporter, by referring to Covid-19 as “the Kung flu.” The next day, a Washington Post photographer captured an image of an alteration to Trump’s prepared remarks on the pandemic, written in Sharpie in what appeared to be Trump’s handwriting, showing that a reference to “the Corona Virus” had been altered to read “the CHINESE Virus.”

When Trump returned to the campaign trail in June 2020, he added the racist joke that Covid-19 was “the Kung flu” to his stump speech, which so pleased his fans that it quickly became an applause they cried out for.

“We had, about two years ago, leaders of our country using terms like, ‘China virus,’ ‘Kung flu,’ literally blaming people who look like me for bringing the virus to this country, and that’s not going to change overnight,” Meng told ABC News this March. “We have a lot of pain and damage to undo.”

According to a right-wing website’s report on the Citizens for Sanity ad, it is scheduled to air before the midterm elections in states where the votes of Asian Americans and Pacific Islanders could decide close races — including Washington, Oregon, Nevada, Georgia, and Pennsylvania.