By Buying Twitter, Elon Musk Has Created His Own Hilarious Nightmare

Musk will likely ruin Twitter for one specific user: himself. 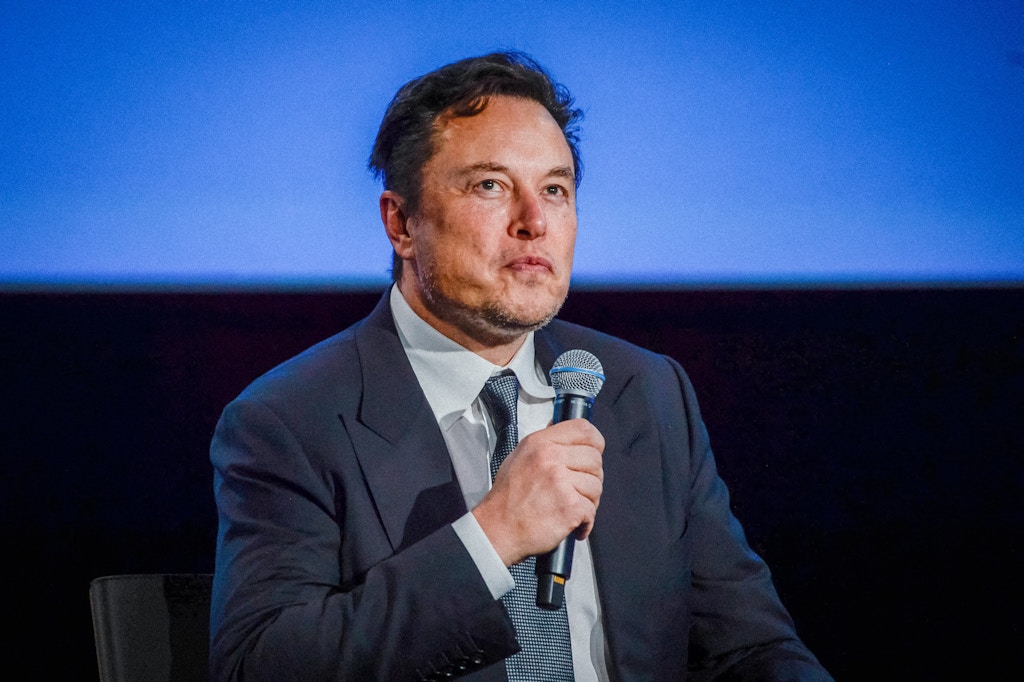 Elon Musk (and his consortium of much smaller investors) now owns Twitter. We need to take seriously the possibility that this will end up being one of the funniest things that’s ever happened.

That’s because as of this moment, it looks like Musk dug a big hole in the forest, carefully filled it with punji sticks and crocodiles, and then jumped in.

The statement starts off, promisingly, with a blatant lie: “The reason I acquired Twitter is because it is important for the future of civilization to have a common digital town square.” Musk apparently believes that no one will remember that until three weeks ago, he was desperately trying not to buy Twitter. The only reason he did is because he was about to lose Twitter’s lawsuit to force him to buy it. This may be the greatest “you can’t fire me because I quit” moment in history.

The significance of the rest of his statement is more subtle. To understand it, you have to start with the basics.

Twitter currently makes 90 percent of its revenue from advertising. (The rest is largely from data licensing.) This means that you, the Twitter user, are not Twitter’s customers. You are its product. Its customers are corporate advertisers and, as every businessperson knows, the customer is always right. Grocery stores care about the people shopping for Cheetos, not about the feelings of the Cheetos themselves.

Twitter’s content moderation has sometimes been heavy-handed — especially when it froze my account because David Duke got mad at me. But this is not because Twitter is run by a woke mob. It’s because Twitter needs to keep advertisers happy — and their top priority is a certain kind of environment for their ads.

This can take specific forms. Delta probably has it written into its contract that its ads won’t run near any tweets about plane crashes. But more generally, advertisers don’t want anything controversial that gets people out of the buying mood, or worse, mad at the brands themselves. Proctor & Gamble can’t allow its ads for Charmin, targeted at the Upscale Panera Mom micro-demographic, to appear below frothing diatribes about annihilating all Muslims.

To make matters worse, Musk’s deal to buy Twitter involved taking out $12.5 billion in loans. This means that Twitter will have to come up with an additional $1 billion a year to service this debt.

This is why Musk hit the ground running with a groveling attempt to propitiate advertisers. He absolutely must keep them happy.

Thus if Twitter simply continues on its current path, it will lose huge amounts of money indefinitely. But if advertisers get nervous about Musk’s management and flee the platform, it could see losses every year in the multiple billions of dollars.

It’s true that Musk has said, “I don’t care about the economics at all.” But even as the richest man on earth, he has to care about them. He has a current estimated net worth of $220 billion, but that’s not $220 billion in cash sitting in a bank vault — it’s mostly tied up in his stakes in Tesla and SpaceX.

Thus to cover big Twitter losses, he would have to sell off more of his stock every year. This would be painful in monetary terms but more so in terms of power: Eventually he would get into a situation in which he could lose control of the companies, Tesla in particular. Moreover, Tesla is publicly traded, and while it’s fallen 45 percent since its high a year ago, it remains way overvalued by normal metrics. Right now its price-earnings ratio is 70. The historical average for the S&P 500 is about 15. The price-earnings ratio for both Ford and GM right now is 6.

This is why Musk hit the ground running with a groveling attempt to propitiate advertisers. He absolutely must keep them happy. As he put it, “Twitter aspires to be the most respected advertising platform in the world that strengthens your brand and grows your enterprise.”

And that’s where the hilarity begins. Musk has engaged in endless paeans to the glory of free speech and the need to end Twitter’s invidious censorship. This clearly isn’t a subject he’s thought deeply about, since he said back in May that Twitter should delete “tweets that are wrong and bad.” Still, his vague pronouncements have given him a legion of right-wing acolytes who feel they’ve been ill-treated by Twitter.

But they are not Musk’s constituency now. Advertisers are. Even if Musk had some genuine commitment to free speech (which he absolutely does not), it would be essentially impossible for him not to continue significant content moderation.

That’s why, after a brief nod to his wish for Twitter to be a place “where a wide range of beliefs can be debated in a healthy manner,” he quickly pivoted to telling advertisers that “Twitter obviously cannot be a free-for-all hellscape, where anything can be said with no consequences! In addition to adhering to the laws of the land, our platform must be warm and welcoming to all.”

This could have been the mission statement of pre-Musk Twitter. But now there’s one big difference: When the content moderation of Twitter remains largely the same, the sense of betrayal among Musk’s super-fans will explode with the force of a supernova. And they will scream at Musk about it nonstop — on Twitter.

Another mogul might have the fortitude to ignore this. But Musk does not, judging by past performance. You can also judge this by current performance: On his first full day on the job, Musk is personally “digging in” to the complaints of Catturd ™.

I will be digging in more today

And while Musk has announced a new “content moderation council with widely diverse viewpoints,” he will feel constantly compelled to either explain why he’s standing by his underlings’ moderation decisions, or reverse them. Then he will inevitably be drawn into personally making more and more content calls, perhaps giving the thumbs up or thumbs down to individual tweets.

It will be hell on earth for him. No matter what decisions he makes, he will infuriate large swaths of Twitter. The left will see its suspicions about him confirmed. The right will see him as a horrendous sellout, just another lying Big Tech swine. Joe Rogan will shake his head sadly about what happened to Elon. Eventually what used to give Musk the greatest pleasure, opening up Twitter on his phone, will be a source of excruciating pain.

And that’s just the beginning. Musk has important business interests around the world, and the potential riptides are endless. What happens when Kim Kardashian starts tweeting about how Taiwan is an independent country? Will the government of China quietly suggest to Musk that he do something about this, or will they make things hard for Tesla’s Shanghai plant and block the import of Teslas? What do other Tesla shareholders do if he defies China, and they find out his little bird app adventure is losing them money? What happens when a SpaceX rocket explodes, but Musk has been too busy adjudicating which Nazi furries are going to be suspended for a month?

This future is obviously not foreordained. Possibly Musk will do what no human has ever been able to do before and invent 1) content moderation that everyone likes at an enormous scale, and 2) a way to make huge amounts of money off Twitter. Maybe Tesla will become so profitable that he can use it to subsidize Twitter until 2090. But the most likely outcome is that he’s just asked the monkey’s paw to grant him his greatest wish. Now look as the paw crooks its gnarled finger, and Musk’s love for Twitter ends up obliterating the Twitter experience for one specific user: Elon Musk.