Even as some in D.C. have expressed concern about the figures in Benjamin Netanyahu’s coalition, little is done about the tax-exempt U.S. supporters of Israel’s far right. 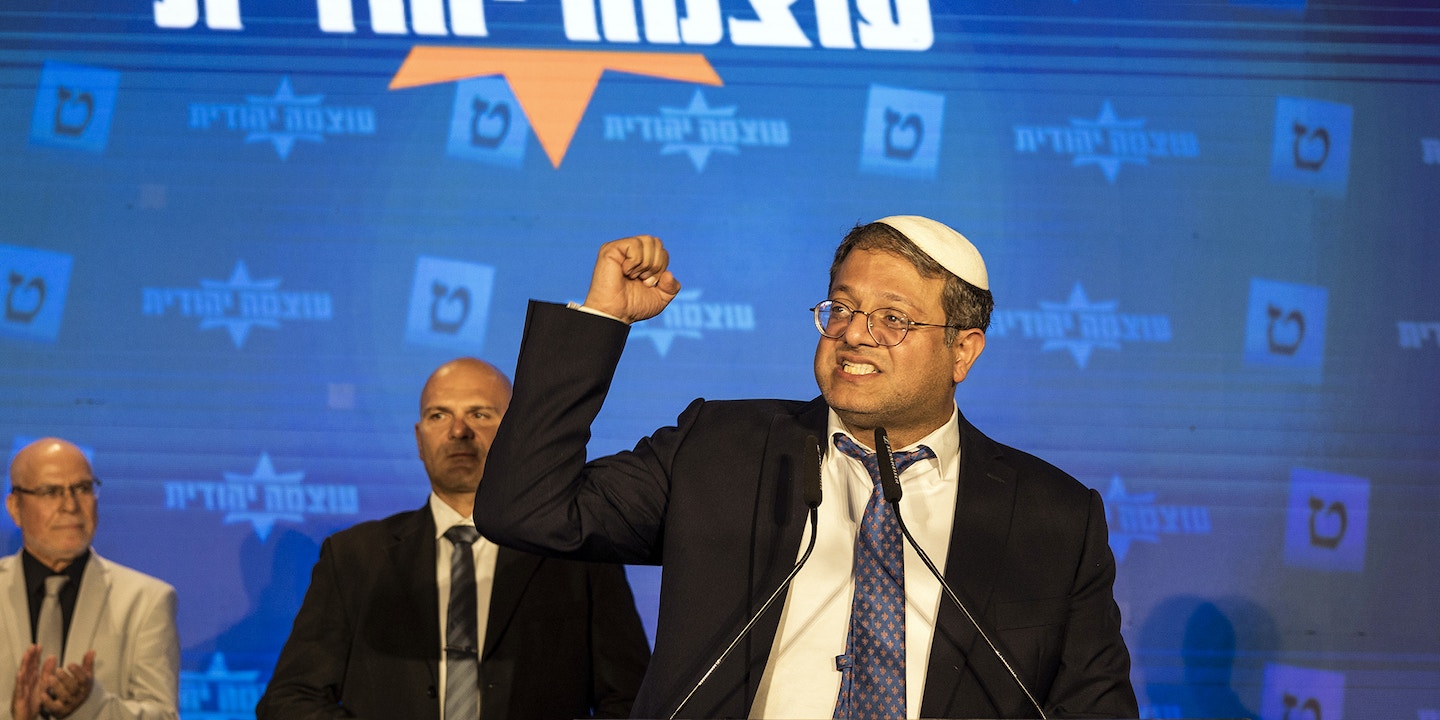 On the website for the Israeli group Chasdei Meir, one member of the staff stands out: “The Magician.” He’s the only employee of the anti-miscegenation group with a photo that doesn’t show his face. “He hits the streets every day to find Jewish women who are involved with Arabs,” his short bio says. “He works his magic to bring the daughters of Israel back to their people.”

This isn’t a Sacha Baron Cohen movie. Chasdei Meir is one arm of a far-right movement whose surging political party, Otzma Yehudit, or Jewish Power, appears to have propelled Benjamin Netanyahu to victory in Israel’s Tuesday election.

According to exit polls, Otzma Yehudit is poised to seize multiple seats in the Israeli parliament. Otzma Yehudit formed an alliance with two other extremist political parties, HaZionut HaDatit and Noam, as part of a coalition to boost Netanyahu. Should the coalition take control, as exit polls suggest it will, Netanyahu will reportedly give its leader Itamar Ben-Gvir a seat in his cabinet.

The party — and its leaders — are famously anti-Arab. On October 13, Ben-Gvir drew his gun in a Palestinian neighborhood in East Jerusalem and told his followers, on camera, to shoot Palestinians. For Ben-Gvir, the provocations against Arabs have proved effective at bolstering his image as Israel’s most hard-line extremist politician — and now a kingmaker in Israeli parliament.

The Jewish supremacists who delivered Netanyahu his victory are the ideological descendants of Meir Kahane, an American-born Zionist and founder of the Jewish Defense League, which has been responsible for bombings on American soil, killings, and attacks on both Arabs and moderate Jews in Israel. Organs of the Kahanist movement have been consistently designated as terror groups by the U.S. and continue to receive funding from a network of U.S. based allies.

For supporters of Israel in America, the ascent of the Kahanists raise troubling political issues. As a Nation investigation detailed in 2019, Chasdei Meir, Otzma Yehudit, and HaZionut HaDatit (also known as National Union or the Religious Zionist Party) are supported by a network of tax-exempt American nonprofits that fund Israeli extremists — many of them based in New Jersey and next door in New York. At least one of the far-right Israeli groups receiving support subsidized by American tax breaks is designated as a terror organization by the U.S.

Many of Israel’s backers in the U.S., however, oppose these groups, and some of them have made it known. At least one liberal Democrat on Capitol Hill who can be relied upon to take Israel’s side has reportedly expressed their concern directly to Netanyahu. Ahead of the elections, Sen. Robert Menendez, D-N.J., a Democrat and the chair of the powerful Senate Foreign Relations Committee, reportedly issued a stark warning to Netanyahu in a closed-door meeting: “The composition of such a coalition could seriously erode bipartisan support in Washington, which has been a pillar of the bilateral relationship between the US and Israel.”

In his own backyard, meanwhile, Menendez has looked the other way, remaining silent on the network of tri-state organizations that fund the very groups he opposes. (Menendez’s office did not respond to a request for comment.)

The network of tax-exempt organizations in the U.S. funnels donations to Ben-Gvir and his followers, supporting their efforts to ethnically cleanse Palestinians through violent attacks and illegal settlements. The groups are still registered with the IRS, and filings show that since The Nation’s investigation into donations made in the early 2000s, many of the groups continued raising money into 2020, the most recent year for which records are available. Lawmakers and federal regulators appear to have done little. The Intercept also uncovered a previously unreported nonprofit — Tomchei Tzedaka — tied to the Israeli far right that has raised over $15 million dollars since 2017.

“It is unacceptable that the U.S. government continues to subsidize funds that are used for illegal activities and to fund violent groups operating in Israel-Palestine,” Raed Jarrar, advocacy director at Democracy for the Arab World Now told The Intercept. “This is an issue that has been going on for decades. The fact that there are nonprofits subsidized by America taxpayers that support organizations designated by the U.S. government as terrorist groups shows that Israel continues to be treated in an exceptional way in Washington, D.C.” 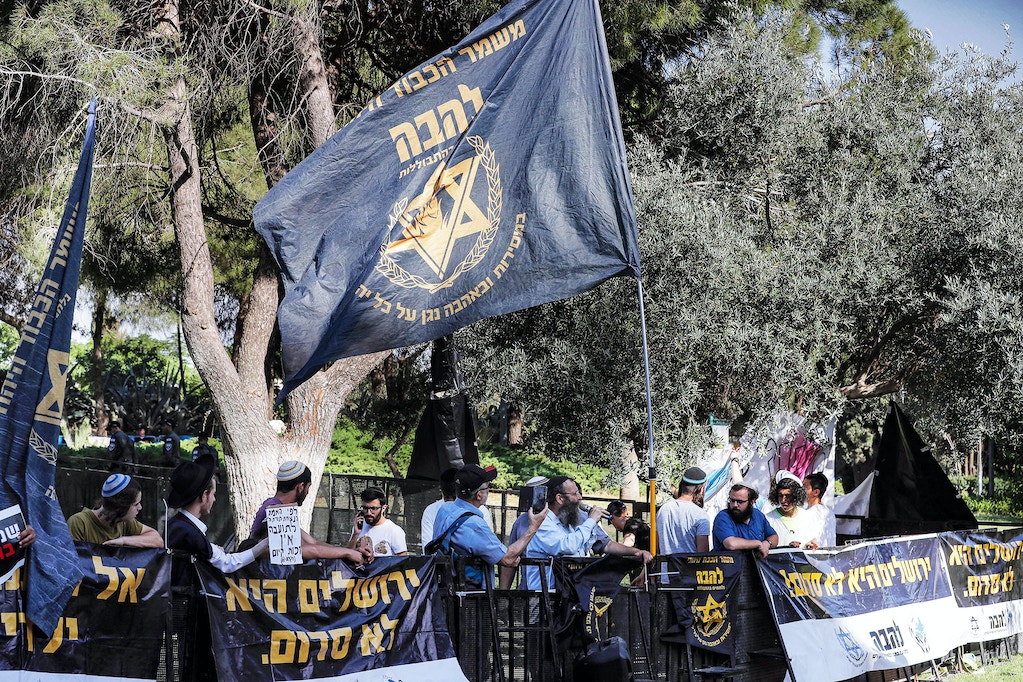 Israeli right-wing demonstrators gather with the flag of the far-right Jewish group Lehava and banners saying “Jerusalem is not Sodom” in Hebrew, during a protest against the annual Jerusalem Pride Parade in Jerusalem on June 2, 2022.

Just as a tangled web of U.S.-based support groups fund the Israeli far right, a complex and dizzying network of organizations inside Israel and occupied territories is on the receiving end of those transactions.

Among the main organs of the Kahanist right is Lehava, a 10,000-strong Jewish supremacist organization that has attacked police, committed arson against mixed Jewish-Arab schools, and organized pogroms in Arab neighborhoods. Lehava shares its headquarters with Ben-Gvir’s Otzma Yehudit party, and Ben-Gvir, a lawyer, has represented members of the group tried for crimes against Arabs. In addition to its political and activist wings, the movement has a religious arm: Yeshivat HaRa’ayon HaYehudi, or the Jewish Idea, which is classified as a terrorist organization by the U.S. due to its affiliation with Kahane’s ideology.

Groups associated with Kahanism were delisted from the State Department’s official Foreign Terrorist Organizations list this year, but remain classified as Specially Designated Global Terrorists under Executive Order 13224, which allows the U.S. to block any financial support. Michael Ben-Ari, a leader of both the Otzma Yehudit party and the Yeshivat HaRa’ayon HaYehudi, was denied entry to the U.S. in 2012 for his terrorist affiliations.

The name “Jewish Idea” is itself drawn from the terrorist organization founded by Kahane in 1987. In addition to the yeshiva, a host of groups in Israel, the occupied territories, and the U.S. use the name. One such U.S. group, Friends of HaRaayon Hayehudi, is based in Skokie, Illinois. The group coordinates with its counterpart, the Charity of Light Fund, Inc., first registered in New Jersey in 2001. As recently as 2020, both U.S. organizations have donated to the Yeshivat HaRa’ayon HaYehudi in Israel, despite the terror listings.

Many top officials in the network of Kahanist groups have a history of violence. Levi Chazan, a director of both Friends of HaRaayon Hayehudi and the Charity of Light Fund, was convicted of shooting nine Palestinians in Ramallah in 1984. Chazan also works with the Kahanist organization Chemla in Israel, which counts multiple operatives in Ben-Gvir’s Otzma Yehudit party as employees. Among them is Ben-Zion Gopstein, who runs Lehava and was indicted in Israel on terrorism charges in 2019 for inciting violence against Arabs. The vigilante anti-miscegenation group Chasdei Meir, named after Meir Kahane, lists Chazan as a member. The organization says he runs a home to “save” Jewish women.

The U.S. donation button on Lehava’s website redirects to the Tomchei Tzedaka Corp, registered in Lakewood, New Jersey. According to tax filings, Tomchei Tzedaka has raised over $16 million dollars in donations since 2017, with most of the funds being passed on to undisclosed organizations in Israel. When reached for comment, a representative of Tomchei Tzedaka told The Intercept that he could not speak on the relationship between Tomchei Tzedaka and Lehava due to “Rabbinic law.”

Despite the well-documented history of violence swirling around the figures who returned Netanyahu to the prime minister’s office, one member of Congress, Rep. Brad Sherman, D-Calif., spoke out forcefully against Otzma Yehudit in the run-up to the election. “As #Israel heads towards another election in November, I urge Israeli political leaders from all sides of the political spectrum to ostracize extremists like Itamar Ben-Gvir whose outrageous views run contrary to Israel’s core principles of a democratic and Jewish state.” Sherman tweeted. “These extremists undermine #Israel’s interests and the U.S.-Israel relationship, which I and my colleagues have worked to strengthen.”

Correction: November 4, 2022
This article was corrected to clarify that Central Fund of Israel did not support Lehava directly, but gave to an organization that supports members of Lehava — and that they temporarily halted those activities following an IRS inquiry.
Wait! Before you go on about your day, ask yourself: How likely is it that the story you just read would have been produced by a different news outlet if The Intercept hadn’t done it? Consider what the world of media would look like without The Intercept. Who would hold party elites accountable to the values they proclaim to have? How many covert wars, miscarriages of justice, and dystopian technologies would remain hidden if our reporters weren’t on the beat? The kind of reporting we do is essential to democracy, but it is not easy, cheap, or profitable. The Intercept is an independent nonprofit news outlet. We don’t have ads, so we depend on our members — 35,000 and counting — to help us hold the powerful to account. Joining is simple and doesn’t need to cost a lot: You can become a sustaining member for as little as $3 or $5 a month. That’s all it takes to support the journalism you rely on.Become a Member