The analysis suggests that the U.S. war in Somalia was waged with no clear legal basis. 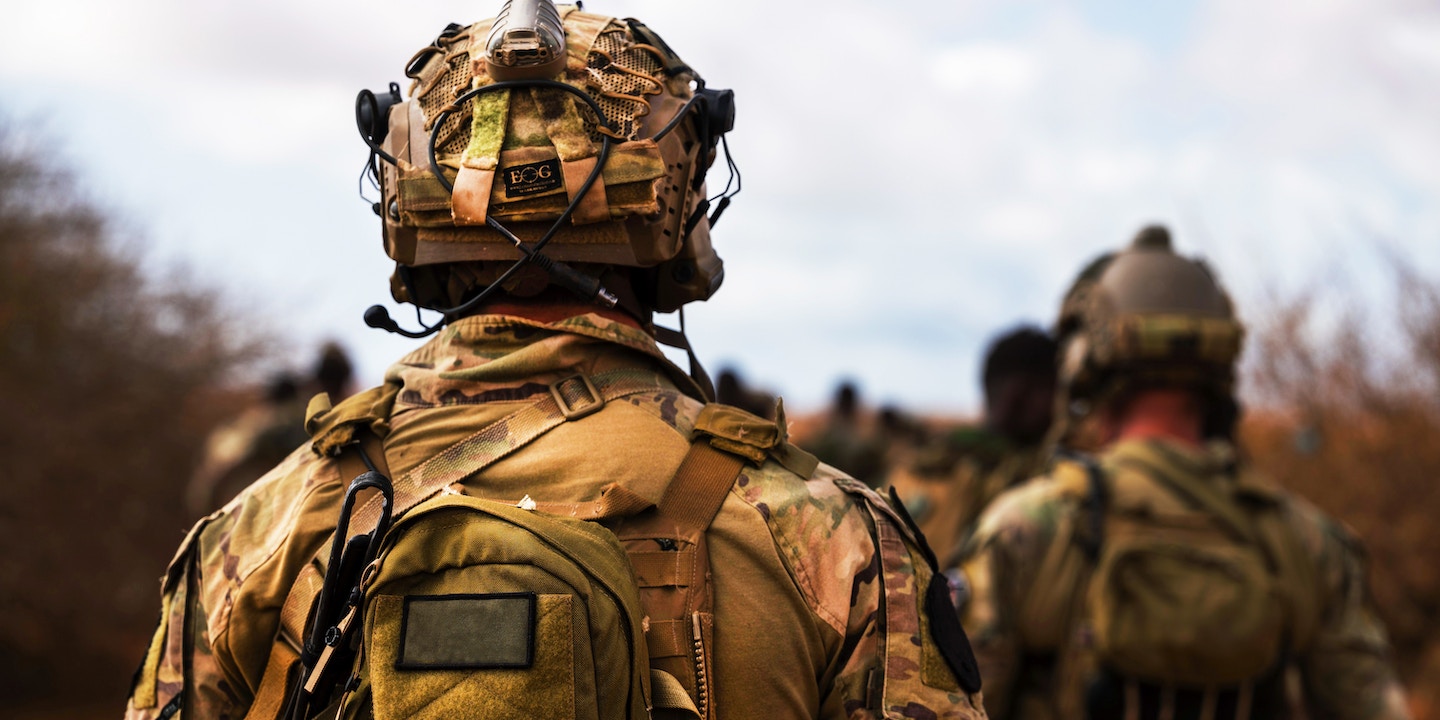 The United States has fought more than a dozen “secret wars” over the last two decades, according to a new report from the Brennan Center for Justice at New York University’s School of Law. Through a combination of ground combat, airstrikes, and operations by U.S. proxy forces, these conflicts have raged from Africa to the Middle East to Asia, often completely unknown to the American people and with minimal congressional oversight.

“This proliferation of secret war is a relatively recent phenomenon, and it is undemocratic and dangerous,” wrote Katherine Yon Ebright, counsel in the Brennan Center’s Liberty and National Security Program. “The conduct of undisclosed hostilities in unreported countries contravenes our constitutional design. It invites military escalation that is unforeseeable to the public, to Congress, and even to the diplomats charged with managing U.S. foreign relations.”

These clandestine conflicts have been enabled by the 2001 Authorization for Use of Military Force, enacted in the wake of the September 11 attacks, as well as the covert action statute, which allows secret, unattributed operations, primarily conducted by the CIA. The United States has also relied on a set of obscure security cooperation authorities that The Intercept has previously investigated, including in an exposé earlier this year that revealed the existence of unreported U.S. counterterrorism efforts in Egypt, Lebanon, Syria, and Yemen. Ebright documents so-called 127e programs, known by their legal designation, in those countries and 12 others: Afghanistan, Cameroon, Iraq, Kenya, Libya, Mali, Mauritania, Niger, Nigeria, Somalia, and Tunisia, as well as a country in the Asia-Pacific region that has not yet been publicly identified.

The 127e authority, which allows U.S. commandos to employ local surrogates on U.S.-directed missions, targeting U.S. enemies to achieve U.S. aims, is just one of three low-profile efforts analyzed in the Brennan Center report. Another, 10 U.S. Code § 333, often referred to as the “global train-and-equip authority,” allows the Pentagon to provide training and gear to foreign forces anywhere in the world.  The far murkier 1202 authority allows the Defense Department to offer support to foreign surrogates taking part in irregular warfare aimed at near-peer competitors like China and Russia.

The report, released Thursday, offers the most complete analysis yet of the legal underpinnings, congressional confusion, and Pentagon obfuscation surrounding these efforts and explains how and why the Defense Department has been able to conduct under-the-table conflicts for the last 20 years.

“The Brennan Center’s report underscores the need to shine a light on our defense activities that have been cloaked in secrecy for too long. At the bare minimum, the public and Congress need to know where and why we’re sending our service members into harm’s way,” Rep. Sara Jacobs, D-Calif., a member of the House Armed Services Committee, told The Intercept. “I hope this report strengthens the urgency of Congress taking back its war powers, eliminating existing loopholes in security cooperation programs, and ensuring our strategies match our values, goals, and commitment to our service members.”

“Congress’s understanding of U.S. war-making is often no better than the public record,” writes Ebright. “The Department of Defense’s diplomatic counterparts in the Department of State also struggle to understand and gain insight into the reach of U.S. hostilities. Where congressional oversight falters, so too does oversight within the executive branch.”

Ebright’s analysis is particularly illuminating in the case of Somalia, where the United States developed two key proxy forces, the Danab Brigade and the Puntland Security Force. The CIA began building the Puntland Security Force in 2002 to battle the Al Qaeda-affiliated al-Shabab and later the Islamic State in Somalia, or ISS. The force was transferred to U.S. military control around 2012 and went on to fight alongside U.S. Special Operations forces for a decade. “In Puntland, we built that capability, training them at the tactical level and in how to support themselves and follow a good counterinsurgency strategy against al-Shabab,” Don Bolduc, the former chief of Special Operations Command Africa and now the Republican candidate for Senate in New Hampshire, told The Intercept in a 2019 interview.

Ebright notes that the proxy fighters were “largely independent of the Somali government, despite being an elite armed brigade and one of Somalia’s most capable special operations units. And their relationship with U.S. forces was long kept secret, with U.S. officials disavowing the presence of military advisers in Somalia until 2014.”

More troubling, her analysis suggests that for a significant period of time, there was no clear legal basis for the U.S. military to fight alongside and direct these forces. The Obama administration designated al-Shabab an associated force of Al Qaeda and thus, a legitimate target under the 2001 AUMF in 2016. That administration did the same for the Islamic State in 2014, but ISS has never been publicly identified as an ISIS-associated force by any administration. This means that the Pentagon developed and fought alongside the Puntland Security Force from 2012 and the Danab Brigade from 2011 — under the 127e and 333 security cooperation authorities — before the AUMF was judged to authorize hostilities against al-Shabab and ISIS, much less ISS.

“The Department of Defense is unequivocal that it does not treat § 333 and 127e as authorizations for use of military force. The reality is not so clear,” writes Ebright. “After all, U.S. forces have used these authorities to create, control, and at times engage in combat alongside groups like the Puntland Security Force and Danab Brigade.”

Over the last 20 years, presidents have consistently claimed broad rights to act in self-defense, not only of U.S. forces but also for partners like the Puntland Security Force and Danab Brigade, which, Ebright notes, potentially allows the U.S. to fight remote adversaries in the absence of any congressional authorization.

Rep. Jacobs said it was difficult to assure the military community in her San Diego district “that we’re doing everything we can to keep them safe when Congress has such little information, let alone oversight over when, where, and how we’re using military force. Attempts to avoid scrutiny from Congress – and Congress’s own abdication of our war powers – is central to how we ended up in forever wars, the spike in civilian casualties, and failed strategies that waste taxpayer dollars and fuel the very conflicts we’re trying to solve.”

Expansive definitions of collective self-defense of proxies are also especially worrisome in regard to the 1202 authority, which requires even less oversight than 333 and 127e and is “used to provide support to foreign forces, irregular forces, groups, or individuals” taking part in irregular warfare. While patterned after 127e, 1202 is aimed not at regional terrorist groups like al-Shabab and ISS but at “rogue states,” such as Iran or North Korea, or near-peer adversaries like Russia and China. “The executive branch’s broad interpretation of its use of force authorities, when combined with 1202, can lead to combat, which Congress hasn’t approved, against powerful states,” Ebright told The Intercept. “For the 1202 authority to have so little oversight when the risks it carries — when you’re running proxy forces against powerful, even nuclear-armed states — is a major mistake.”

The report offers suggestions for improving congressional and public oversight, enforcing the balance of war powers within the government, and preventing hostilities unauthorized by Congress. “Repealing §§ 333, 127e, and 1202 would return the balance of power to where it stood before the war on terror,” Ebright writes, forcing the Pentagon to convince Congress that building foreign proxies abroad is in the United States’s national security interest. This is critical given that working by, with, and through foreign surrogates and allies is key to the Pentagon’s global vision, according to the Biden administration’s recently released National Security Strategy and National Defense Strategy.

“Both of those documents underscore that the DOD views security cooperation as the future of its approach,” Ebright told The Intercept. “Meanwhile, on Capitol Hill and in the broader public, we don’t have conversations about what this means, to the detriment of voters understanding where we’re at war and how this is going to affect military involvement and entrenchment abroad.”