Lawsuits Target War on Wolves and Grizzlies in the Northern Rockies 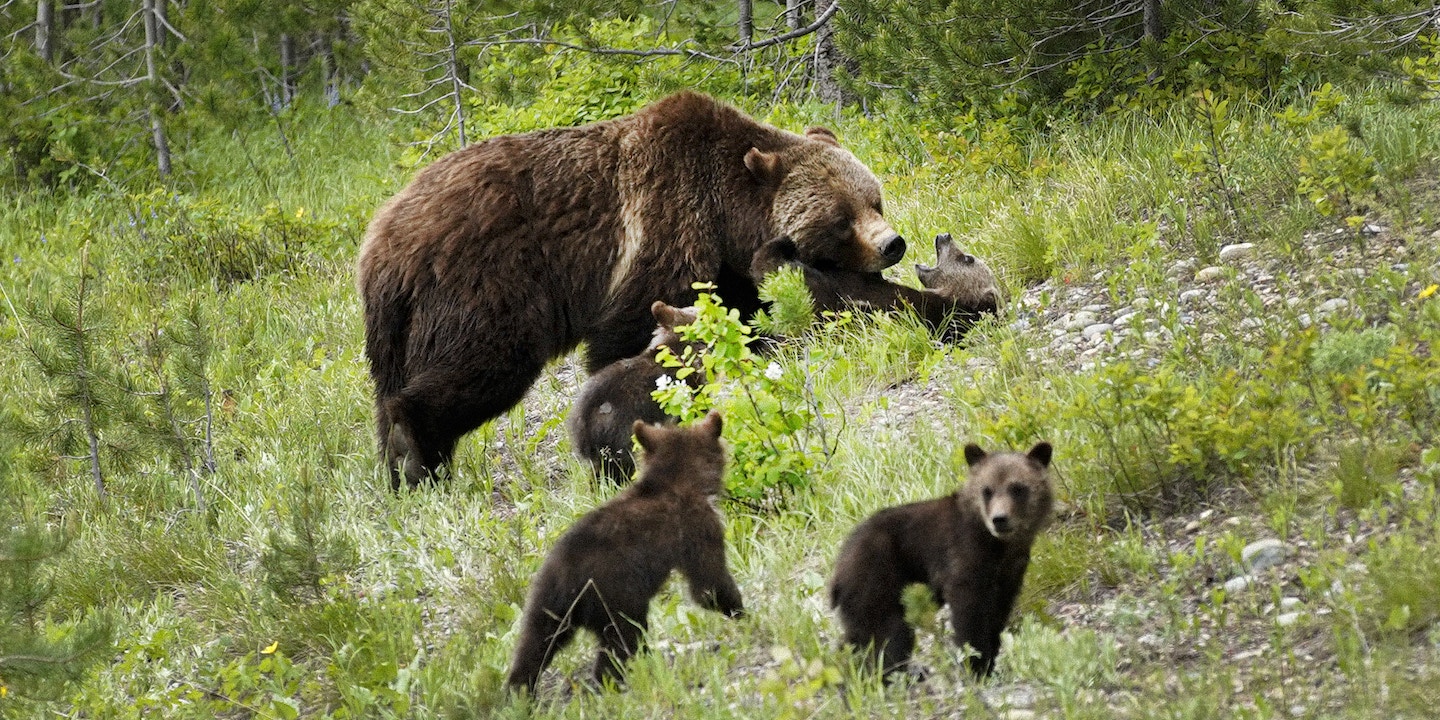 The most iconic predators in the American West are under attack, and top government officials and agencies are failing to uphold the law to protect them. Those are the allegations in a pair of lawsuits filed in federal and state court recently.

Though filed separately, the two claims share a common concern: that wolf and grizzly bear populations in the Northern Rocky Mountains will be decimated.

In the past year, leading wildlife biologists have spoken out with rising alarm about the fate of the predators in Idaho, Wyoming, and Montana, where Republican lawmakers have advanced some of the most aggressive laws and proposals targeting the two species in recent history.

“There’s urgency to this. You really can’t reverse the consequences of a dead animal.”

“I feel that our public officials at the federal and state levels do not care anywhere near enough about fish and wildlife,” Robert Aland, a retired attorney and longtime environmental activist who brought the federal case, told The Intercept. “There’s urgency to this,” he added. “You really can’t reverse the consequences of a dead animal.”

By law, the U.S. Fish and Wildlife Service should protect against threats to endangered species at the federal level. State wildlife agencies, meanwhile, should promote science-driven, nonpartisan management of species that are not endangered. For wolves and grizzlies, environmental advocates say systems are failing at both levels.

In the first of the lawsuits, filed late last month in the federal court, Aland petitioned a judge to declare that the director of U.S. Fish and Wildlife Service, Martha Williams, is illegally occupying her position and order her removed.

Under the law, the director of U.S. Fish and Wildlife Service is to have both scientific experience and education. As an attorney, Williams has an extensive history in the legal arenas of wildlife management but does not have a scientific degree. According to Aland, “This is in violation of the clear and unequivocal terms of the statute.”

Anything less than Williams’s removal, he argued, would lead to the “legal contamination” of several Endangered Species Act petitions concerning grizzly bears and wolves in the Northern Rockies.

U.S. Fish and Wildlife Service declined to comment on Aland’s lawsuit. On October 26, five days after the complaint was filed, an external affairs office at the Department of the Interior, Fish and Wildlife’s parent agency, sent Aland an unsigned email saying: “The Department is fully confident that Director Williams is well qualified and has all the necessary authority to lead FWS.”

In the past year, many top wildlife researchers in the Rocky Mountains have warned of a return to the bad old days of the 1880s following political changes in the region.

Westward expansion in the 19th century featured a devastating war on wildlife that led to the extirpation of wolves and the near-total extermination of grizzly bears. In the generations since, conservationists and wildlife biologists, including many working for state and federal agencies, have gone to great lengths in their attempts to help the two species recover.

Wolves were among the first animals listed under the Endangered Species Act and the first to be removed, following their reintroduction in Yellowstone National Park and Central Idaho in 1995. A similar effort has been made to restore grizzlies to the region, an arguably even more difficult task given the animals’ slow rates of reproduction and sensitivity to human-caused mortality.

Grizzlies are still protected under the Endangered Species Act, though the trophy hunting lobby is agitating to have them removed. Wolves in the Northern Rockies, meanwhile, are not protected under the law, and environmental groups are fighting to see them relisted.

While politics have always shaped carnivore conservation, recent events have left many scientists horrified and outraged that decades of work could soon be lost.

In January, 35 of the region’s most prominent wildlife biologists wrote an open letter objecting to petitions from Wyoming, Montana, and Idaho to delist grizzly bears. The signatories included the longtime head of the U.S. Fish and Wildlife Service grizzly bear recovery effort, who declared that he no longer supported delisting grizzly bears due to politically driven changes to carnivore management. If grizzlies were delisted, the biologists argued, they would likely face the same treatment that wolves across the Northern Rockies were already experiencing.

Outside the protected confines of Yellowstone National Park, Wyoming has long permitted a shoot-on-sight approach to wolves across much of the state. Last year, Republican lawmakers in Idaho and Montana took major steps in the same direction, passing laws to drastically slash wolf populations — in Idaho by as much as 90 percent — by granting individual hunters and trappers the authority to wipe out entire packs, and legalizing wolf bounty programs, aerial hunting, the use of snares, night hunting with night-vision goggles and other measures long seen as far outside the ethical bounds of “fair chase” hunting, which requires that hunters not take unfair advantage over the animals they seek.

“It doesn’t take a lot of imagination to realize that if grizzly bears were delisted and turned over to state management,” the letter said, “that the Montana legislature and governor would do the same thing to grizzlies that they are currently doing to wolves.”

In addition to the states’ requests to delist the bears, Wyoming Republicans Rep. Liz Cheney and Sen. Cynthia Lummis have introduced bills to not only delist grizzlies, but also to bar public comment and prevent any judicial review of the decision.

“It tramples on our separation of powers,” Aland said. The 82-year-old is no newcomer to wildlife litigation. He has been a pro se plaintiff in several lawsuits against U.S. Fish and Wildlife Service to keep grizzly bears listed as an endangered species. In his experience, citizen participation, particularly litigation, has proven “absolutely essential” in upholding the Endangered Species Act. His lawsuit seeking Williams is no different, he argued.

“There are three petitions to remove the grizzly bears ESA protection for a third time. That’s a scientific decision,” Aland said. Williams’s legal career wildlife management may help her navigate the cases, Aland argued, “but she’s not even close to qualified to make that biological, scientific decision.” Photo: Louise Johns for The Washington Post via Getty Images

Aland’s litigation follows the traditional route of raising concerns about conservation through federal court, but the veteran environmental litigator noted that some of the most consequential decisions in wildlife management happen at the state level. “The state agencies have gotten a complete pass on everything,” he said. “They don’t get sued for anything, so they feel like they can operate with impunity.”

On October 27, the environmental groups WildEarth Guardians and Project Coyote, filed suit in a county court against the state of Montana; its Fish, Wildlife and Parks department; and the panel of citizen commissioners who make policy for FWP.

Calling for an injunction halting the state’s wolf hunt, which began last month, the groups argue that Montana violated its own constitution in proceeding with last winter’s wolf hunt and that Republicans’ goals for reducing the wolf population were based on unreliable population modeling.

“We’re advocating for federal action, of course, to get wolves back on the endangered species list, to get those protections there, but we just don’t know when that’s going to happen,” Lizzy Pennock, a carnivore coexistence advocate for WildEarth Guardians, told The Intercept.

Over the past year, Pennock and her colleagues have grown increasingly concerned watching FWP, once considered one of the most respected state wildlife agencies in the country, become a conduit for an unscientific, partisan approach to wolf management that undermined years of hard-won compromise in the state. “We have been really frustrated with FWP and what’s going on and we wanted to take action at a state level,” she said.

Pennock is hopeful that Montana’s constitution, which is uniquely strong in protecting the state’s natural resources, including its wild animals, can serve as a means to protect against the kind of undemocratic and unscientific policymaking of the past two years. As The Intercept reported in an investigation in July, the 2020 election of Montana Gov. Greg Gianforte ushered in a radical reordering of the state’s wildlife governance, stacking the commission overseeing FWP with representatives from the trapping and trophy hunting industry, as well as campaign donors.

Among the core claims in the WildEarth Guardians-Project Coyote lawsuit is an argument is that the justification for Montana’s ultra-aggressive wolf hunt is based on unreliable data.

Montana’s state legislature meets every two years for 90 days. During the 2021 session, Republican state legislators Bob Brown and Paul Fielder advanced a series of anti-wolf bills — all signed into law by Gianforte, endorsed by his handpicked FWP commissioners, and enforced by the department — based on the argument that Montana had too many wolves and at least 450 of the animals needed to be killed. “We’re not talking about necessarily ethical management of them,” Fielder said in the run-up to the 2021 hunt. “We want to reduce wolf numbers.”

Fielder pointed to a “new and improved model,” known as the “integrated patch occupancy model,” or iPOM, that FWP was using to estimate wolf population numbers in the state.

The WildEarth Guardians-Project Coyote lawsuit noted that iPOM — used only in Montana and only for wolves — has come under heavy criticism from some of the region’s leading wildlife management experts. The wolf legislation Gianforte signed in 2021 called for the killing of at least 450 wolves; the season ended well short of that mark, with 273 wolves killed. While anti-wolf Republicans have pointed to the total as evidence that a more intensive hunt is needed, wildlife biologists have argued that it may suggest that iPOM’s estimate of how many wolves live in the state — roughly 1,164 — was inflated.

“It’s hard to say what we know about the population because I don’t know how much we know, and I think that’s the point,” Pennock said.

The Montana legislature reconvenes in January. In a public meeting in September, Fielder signaled that the state would ratchet up its war on wolves in 2023. “It was stated on the floor last session that this is not about ethical or fair chase, it was about reducing the number of wolves. Management starts with M-A-N, man. We’ve got to take control of things,” he said. “As we go into this next Legislative session, we’ve got to look at how we can meet the intent of the Legislation that was passed in 2021.”

Conservationists are bracing for the worst. According to Pennock, “It’s gonna be a field day.”