The wars in Iraq and Afghanistan radicalized a generation of veterans, many of whom face trials for sedition and other crimes. 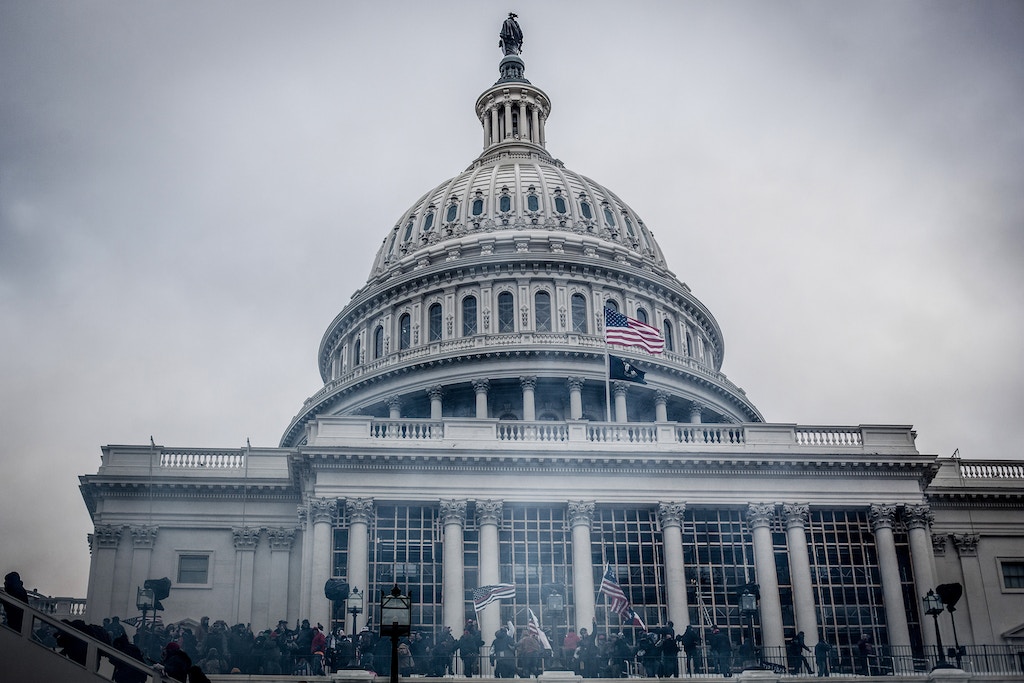 Tear gas is deployed against pro-Trump rioters breeching the U.S. Capitol on Jan. 6, 2021 in Washington, D.C.

Nathan Bedford Forrest was one of the most aggressive generals of his generation, and after his military service ended in a bitter fashion, he went home to Tennessee and found a new way to fight. A defeated general in the Confederate army, Forrest joined the Ku Klux Klan and was named its inaugural “grand wizard.”

Forrest was in the first wave of American veterans who turned to domestic terror once they returned home. It also happened after World War I and II, after the Korean and Vietnam wars — and it is happening after the wars in Iraq and Afghanistan. The sedition trial now taking place in Washington, D.C., features five defendants accused of trying to overthrow the government on January 6, 2021, and four are veterans, including Stewart Rhodes, who founded the Oath Keepers militia. In December, another sedition trial is set for five members of the Proud Boys militia — four of whom served in the military.

A relatively small number of veterans are having an outsized impact on white supremacist violence.

The point here is not that all or most veterans are dangerous. Those who engage in far-right extremism are a fraction of the more than 18 million Americans who have served in the armed forces and returned to civilian life without indulging in political violence. Of 897 people indicted after the January 6 insurrection, 118 have military backgrounds, according to the Program on Extremism at George Washington University. The point is that a relatively small number of veterans are having an outsized impact on white supremacist violence, thanks to the respect that flows from their military service. While they are outliers from the mass of law-abiding vets, they are the tentpoles of domestic terror.

“When these guys get involved in extremism, they shoot to the top of the ranks and they are very effective at recruiting more people to the cause,” noted Michael Jensen, a senior researcher at the University of Maryland’s Study of Terrorism and Responses to Terrorism.

This is a consequence of our society venerating a massive army and going to war at regular intervals: The last 50 years of far-right terror have been dominated by men with military backgrounds. Most infamously, there was Gulf War veteran Timothy McVeigh, who set off the Oklahoma City bomb in 1995 that killed 168 people. There was Eric Rudolph, an Army vet who planted bombs at the 1996 Atlanta Olympics as well as two abortion clinics and a gay bar. There was Louis Beam, a Vietnam veteran and Klansman who became a dark visionary of the white power movement in the 1980s and was tried for sedition in 1988 (he was acquitted, along with 13 other defendants). The list is nearly endless: A founder of the neo-Nazi Atomwaffen Division was a vet, while the founder of the Base, another neo-Nazi group, was an intelligence contractor for the U.S. military in Iraq and Afghanistan. And the man who attacked an FBI office in Cincinnati after federal agents searched the Mar-a-Lago home of former President Donald Trump in August was — you guessed it — a veteran.

Adjacent to the violence, key figures in far-right politics come from the military and boast of their wartime service, such as former Gen. Michael Flynn, who has emerged as a high-profile promoter of QAnon-ish conspiracy theories as well as an election denialist. In New Hampshire, former Gen. Donald Bolduc is the GOP candidate for Senate and a spreader of lunatic ideas that include the notion that school children are allowed to identify as cats and use litter boxes (do a web search of “Bolduc litter box”). GOP gubernatorial candidate Doug Mastriano, reportedly the “point person” for Trump’s fake elector scheme in Pennsylvania, blanketed his campaign with so much military imagery that the Pentagon told him to dial it back.

The “why” of this pattern is complex. When wars are drenched in as many high-level lies and pointless deaths as the ones in Vietnam, Iraq, and Afghanistan, there is no shortage of good reasons for veterans to feel betrayed by their government. Leaving the service can be a fraught process even without that baggage. After years in an institution that brought order and meaning to their lives — and that defined the world in a simplistic binary of good versus evil — veterans can feel adrift at home and yearn for the purpose and camaraderie they had in the military. As the special forces veteran-turned-journalist Jack Murphy wrote of his comrades who fell into QAnon and other conspiratorial mindsets, “You get to be part of a movement of like-minded people, you’re fighting evil in a worldview that you have become comfortable with. Now you know why you don’t recognize America, not because you had a silly preconception of it from the beginning, but rather because it has been undermined by a satanic cabal.”

There is an added twist that historian Kathleen Belew points out: that while the role of veterans in domestic terror is underappreciated, they are not the only ones unhinged by war.

“The biggest factor [in domestic terror] seems not to be what we have often assumed, be it populism, immigration, poverty, major civil rights legislation,” Belew noted in a recent podcast. “It seems to be the aftermath of war. This is significant not only because of the presence of veterans and active-duty troops within these groups. But I think it’s reflective of something bigger, which is that the measure of violence of all kinds in our society spikes in the aftermath of war. That measure goes across men and women, it goes across people who have and have not served, it goes across age group. There’s something about all of us that is more available for violent activity in the aftermath of conflict.”

In 2005 the so-called war on terror was justified by President George W. Bush as “taking the fight to the terrorists abroad so we do not have to face them here at home.” The irony is that those wars — which cost trillions of dollars and killed hundreds of thousands of civilians — instead radicalized a generation of American zealots who for years to come will inflict violence on the country they were supposed to protect. This is yet another stupendous offense for which our political and military leaders should face history’s vengeance.