In Referendum on Whether You Can Prosecute Murderous Cops at All, Keith Ellison Ekes It Out

Keith Ellison defends his progressive mantle in Minnesota’s attorney general race after attacks from all sides. 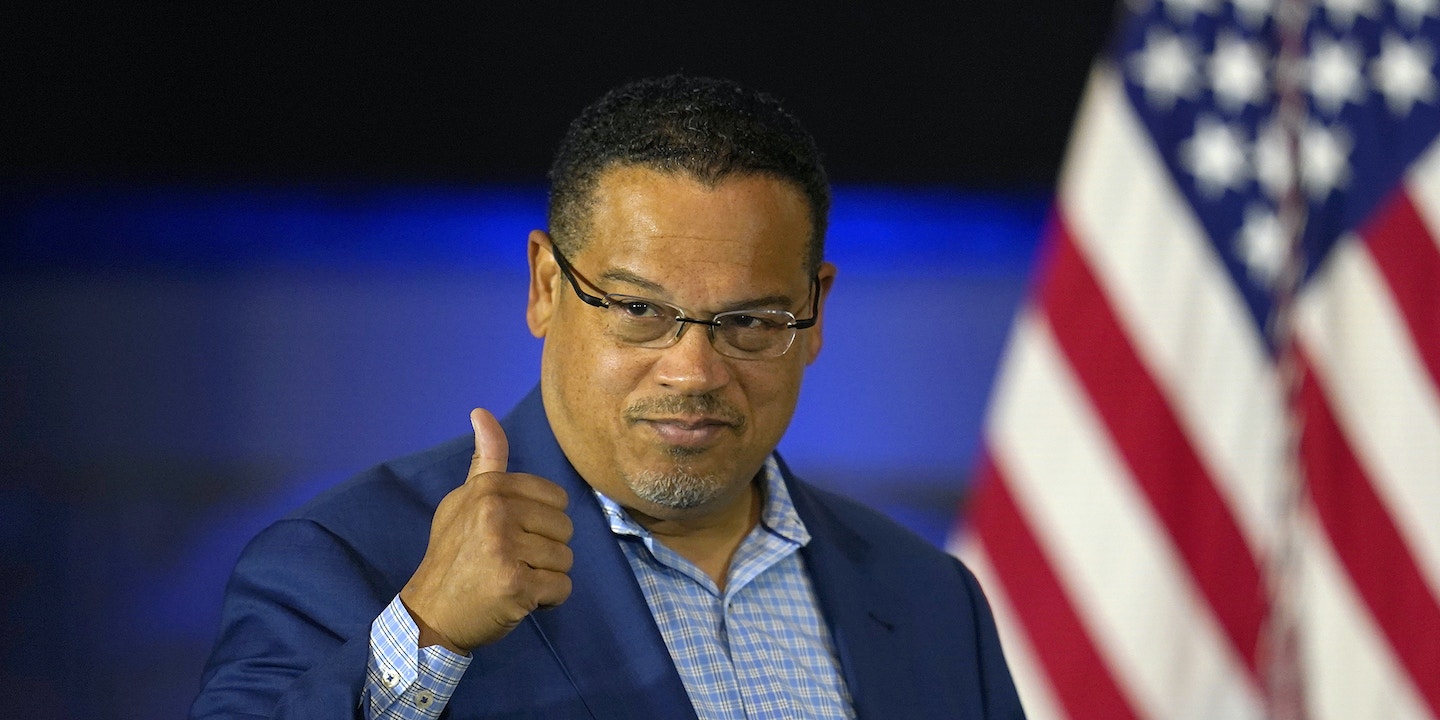 Keith Ellison is no stranger to fending off political attacks from both parties. On Wednesday, he extended his streak and defended Democrats’ undefeated statewide mandate in Minnesota, stretching back to 2006. With 100 percent of precincts counted, Ellison won reelection as Minnesota’s attorney general by a little over 20,000 votes.

This year, Ellison found himself caught between his reputation as a progressive attorney general who doggedly pursued lawsuits against corporate criminals, and a Democratic Party attacked for failing to uphold an ambiguous notion of law and order — despite the bona fides of its tough-on-crime president.

Ellison’s prosecution of the police officers responsible for the murder of George Floyd spurred attack ads supported by Minnesota law enforcement groups and Republican super PACs. As The Intercept reported earlier this week, police unions spent some $300,000 against Ellison. His opponent, Republican Jim Schultz, also seized on Ellison’s support for a ballot measure that would have created a Department of Public Safety in Minneapolis as a testament to his weak stance on crime.

Despite the GOP onslaught, Ellison was buoyed by over $4 million in ad spending from allied groups including the People’s Lawyers Project — Minnesota’s extension of the Democratic Attorneys General Association — and a smattering of local and national unions whose workers he has labored to protect. “This is a very clear contrast as to who you’re gonna get: a consumer advocate, a worker’s advocate — or a hedge fund Wall Street lawyer,” Ellison said during an October debate with Schultz.

As the first Muslim member of Congress, Ellison was subjected to unrelenting GOP abuse targeting his faith. One member, Rep. Virgil H. Goode Jr., R-Va., even advocated for preventing Muslims from joining Congress in the wake of Ellison’s electoral success. Through nearly two decades of racist and Islamophobic vitriol, Ellison ascended the progressive ranks, becoming vice chair of the Congressional Progressive Caucus before launching a bid for chair of the Democratic National Committee.

The prospect of a progressive Muslim at the helm of the DNC proved too much for the party’s old guard. Another smear campaign, this time orchestrated by members of his own party, attacked Ellison for his Muslim faith and human rights advocacy on behalf of Palestinians. With the backing of party mainstays in the Clinton and Obama camps, Tom Perez defeated Ellison by 30 votes. A coup purging the DNC of Ellison allies and relegating him to an impotent seat as deputy chair ensued, but Ellison maintained his progressive convictions, leaving Congress to successfully run for Minnesota attorney general in 2018.

As Ellison opened up a fundraising edge, outside Republicans, including the Republican Attorneys General Association, went in big on the race. But in their haste to do so, they attracted a serious accusation that they violated campaign finance laws explicitly banning coordination between super PACs and campaigns. According to a complaint submitted by the Democratic Farmer Labor Party, some of the $800,000 in super PAC-funded ads attacking Ellison were signed off on by a registered agent of his opponent — amounting to illegal coordination with an outside group.

Schultz’s campaign described the complaint as a “desperate attack.” But George Soule, vice chair of the Minnesota Campaign Finance and Public Disclosure Board, determined there was some merit to the DFL’s claim that the ad buy violated the $2,500 campaign contribution limit for donations. A decision from the board on whether to open a formal investigation will take weeks, rendering the impact any violations may have had on the race moot.

As The Lever noted last week, the race also served as a referendum on corporate power and consumer protection. Schultz, a corporate lawyer hailing from the world of hedge funds, has opposed Ellison’s legal action on consumer price gouging, affordable housing, fossil fuel company oversight, and private equity predation. The Harvard-educated Schultz made clear his intention to cut funding for the attorney general’s corporate prosecution division in a move sure to please his hedge fund clients.

Democrats also feared that, with Schultz atop the attorney general’s office, his prior role as a board member on the Human Life Alliance — a radical anti-abortion group — would imperil Minnesotans’ access to abortion. Ellison, following Democrats’ national strategy, hammered his opponent on his prior pro-life advocacy in the context of the overturning of Roe v. Wade. Despite affirming his politics as pro-life, Schultz backed away from the issue, hedging on its importance in the race.

Before polls closed on Tuesday, Ellison wrote, “My opponent’s vision: fear + division. That’s not my vision. MNs are greater than that. We’re strongest when we stick together and help everyone do better. We know everybody counts, everybody matters. No exceptions.”