A Controversial Decision in Oregon Could Cost Democrats the House

Progressive Jamie McLeod-Skinner trails by 2 points in a race the national Democratic super PACs preemptively deemed unwinnable. She’s not the only one. 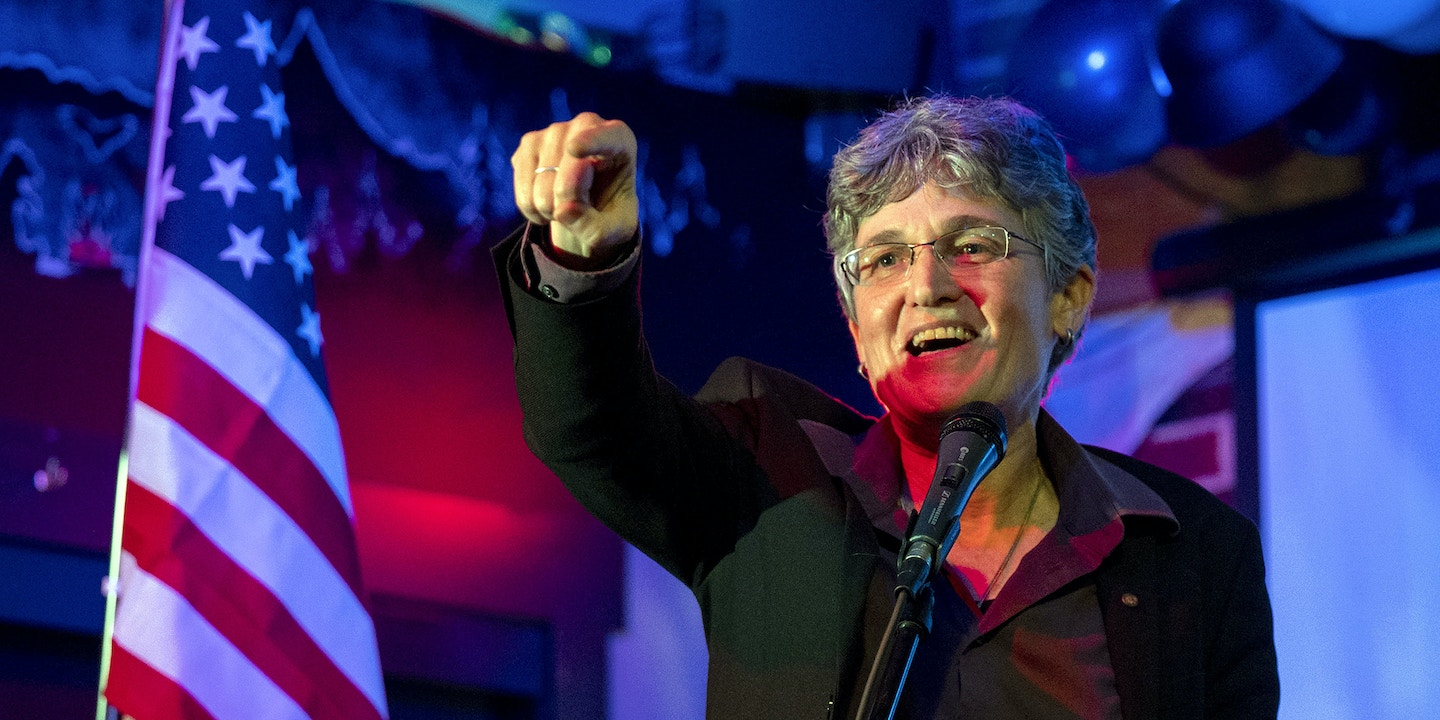 Against all odds, Democrats continue to have a plausible path to retaining the House majority, putting a microscope on strategic decisions made by party leaders in the final weeks of the campaign. The race may even come down to a single seat, elevating the cost to the party of its underperformance in the home state of Rep. Sean Patrick Maloney, D-N.Y., the chair of the Democratic Congressional Campaign Committee whose high-profile bigfooting of a fellow Democrat ended with his surprise loss on Tuesday.

It has also put a spotlight on a race in Oregon that could prove pivotal. There, Democratic nominee Jamie McLeod-Skinner is locked in a tight battle with millionaire Lori Chavez-DeRemer for the 5th Congressional District, which stretches south and east from the Portland suburbs in Clackamas County to Deschutes County, which includes the rapidly growing and highly competitive city of Bend. McLeod-Skinner made national headlines earlier this year for defeating seven-term incumbent Kurt Schrader in a fiercely contested primary. Her win — the only success an insurgent candidate notched against a Democratic incumbent this cycle — was driven by a lopsided overperformance in Deschutes.

Schrader had been a member of the so-called Unbreakable Nine who organized against President Joe Biden’s Build Back Better agenda, and said in a private call with the dark-money sponsors of their operation, No Labels, that he hoped to kill it. National progressive groups as well as most of the local Democratic Party operations rallied behind McLeod-Skinner to knock out Schrader in May.

While the DCCC made an investment of just under $2 million dollars in the race, they came off the air in the final few weeks, and the leadership-aligned super political action committee, House Majority PAC, made the eyebrow-raising move to triage the race altogether. House Majority PAC communications director CJ Warnke declined to explain the reasoning behind the move at the time, but told The Intercept Friday that House Majority PAC “had to make strategic decisions across the country to build the most optimal path to Democratic success this cycle.”

“Our investments,” he continued, “made a major difference across the country and in Oregon, where we spent nearly $4 million for Congresswoman-elect Val Hoyle in OR-04 and State Rep. Andrea Salinas in OR-06 — who both faced an unprecedented amount of Republican spending this year.”

Of course, the fiasco in the neighboring 6th Congressional District also has House Majority PAC’s fingerprints all over it. There, progressive state representative Andrea Salinas entered the general election bruised from the most expensive primary contest in the nation after former cryptocurrency billionaire Sam Bankman-Fried and House Majority PAC teamed up in an over $10 million failed attempt to anoint political newcomer and effective altruist Carrick Flynn as the nominee. The unorthodox partnership appeared to be the result of a quid pro quo, as Bankman-Fried contemporaneously donated $6 million to the committee. House Majority PAC spent $1 million on Flynn and ended up spending over $3.25 million of the remainder helping Salinas win the general election in a seat that was considered safe earlier in the cycle. The DCCC also spent $1.75 million boosting Salinas. (Bankman-Fried was worth billions of dollars at the time; as of now, he appears broke.)

Republicans, on the other hand, treated the race in Oregon’s 5th District as the toss-up it clearly was; they spent nearly $8 million in total — spending that ballooned all the way through Election Day.

That put Oregon’s 5th in the top 20 when it came to spending by House Republicans, while McLeod-Skinner was near the bottom for Democrats when it came to competitive races. Republicans also had more money to work with: Congressional Leadership Fund, the House Republican super PAC, had some $250 million to parcel out across the country, while the Democrats’ super PAC spent around $140 million. “The data just wasn’t there on that race,” argued one Democratic operative involved in the race. “Portland was also an incredibly expensive media market. I don’t know where you would have pulled the money from.” Of course, the cheaper Bend media market, in the southeastern part of the district, also went untapped.

While a handful of progressive organizations stepped in to alleviate some of the massive financial disparity — including a $1 million investment from Working Families Party that stretched across the primary and general — their limited resources meant McLeod-Skinner, who has long declined support from corporate-funded PACs, was left with an outside spending deficit of over $5 million. The progressive groups who worked to close that gap have been sharp in their criticism. “While they pumped last-minute money into the DCCC chair’s losing race in New York,” Indivisible national political director Dani Negrete told The Intercept, “Jamie has been holding on entirely based on her strength as a candidate and her grassroots support.”

The party’s underinvestment in McLeod-Skinner is reminiscent of Democrats’ decision to abandon progressive nominee Kara Eastman during her 2018 run against Nebraska Rep. Don Bacon. After Eastman won a stunning upset against the national party’s handpicked nominee, former representative Brad Ashford, Democrats’ national committees declined to spend significant money to help her in the general election, which she lost by just under 5,000 votes. When Eastman was renominated for the seat in 2020, the national party lent its support, but the damage was already done. Millions in unanswered ads from previous cycles had defined her image to the electorate, and Bacon, whose prior record was in step with harder line conservatives in his party, moderated his image substantially. He won by over 4 percentage points.

Despite the headwinds he faced this year, Bacon trounced moderate Democrat Tony Vargas, who ran with the early blessing of the national party, by a margin nearly identical to the margin he beat Eastman by in 2020 — demonstrating that progressive antipathy is unworkable as either a short-term or long-term strategy if national Democrats hope to wield power rather than appease wealthy donors.

Elected Democrats have heaped praise on outgoing DCCC Chair Maloney for the unexpectedly strong performance despite the steep losses the party suffered in Maloney’s own backyard. In a twist, the loss of Maloney’s own seat, in the suburban 17th District in New York, is being heralded as an act of self-sacrifice rather than evidence of a severe lapse in judgment.

House Speaker Nancy Pelosi, D-Calif., suggested Maloney should be lauded for his loss, on the grounds that it enabled victory elsewhere across the map. Former presidential contender and current Rep. Seth Moulton, D-Mass., echoed that sentiment, declaring himself “first on the list” of Maloney fans for supposedly putting himself at risk for the sake of the party.

Our DCCC Chairman put himself at risk to support other congressional Democrats. Service before self— that’s leadership. Mark me first on the list of @spmaloney fans.

Thank you, Sean, for a decade of service and two years in the political trenches.

Several of the Democratic seats that Republicans managed to pick up — including the Long Island-based 3rd and 4th districts, which Biden won by 8 and 15 points respectively — saw less than $3 million in investments by the DCCC and House Majority PAC. Those figures greatly lag the over $4 million in spending Maloney was able to marshal from new outside PACs in his ill-fated quest to hold a seat Biden won by over 10 points, according to a DailyKos calculation. In Long Island, Democrats were also hurt by the retirement of Rep. Tom Suozzi, and the redistricting process ordered by the Court of Appeals, which pushed the primary back to September, giving Democrats only two months to campaign for the general election.

Some races in California, where key elections hang in the balance, also saw Democrats outspent. In two particularly glaring examples, the party’s national committees invested a measly $23,000 in Christy Smith and an underwhelming $204,000 in Jay Chen: two Democratic nominees who challenged Republican incumbents in Democratic-leaning districts.

Smith said she has a “very narrow” path remaining, as ballots continued to be counted, but had no kind words for Washington Democrats. “They did more than give up on me,” she said, noting that the DCCC recruited a candidate to run against her in the primary, despite her having lost in 2020 by fewer than 350 votes. With the party machinery behind John Quaye Quartey, Smith’s fundraising capacity was suppressed, and she blew through her million dollars to win the primary, entering the general broke. The national party’s preferred candidate won just 4,037 votes in the primary. “That was also a waste of the $1 million in donor money he raised to get a single digit result. Two million dollars in Dem donor money wasted on a primary that they created,” Smith said. After that, the party walked away from the race.

And in neighboring Arizona, Democrat Kirsten Engel is defying expectations in her bid for the Tucson-based 6th Congressional District after receiving just over $70,000 in support from Democrats’ national committees — a paltry sum against an opponent who received nearly $5 million in support from equivalent Republican groups.

Both parties missed some of the close races. Nobody saw the challenge Democrat Adam Frisch would present to Rep. Lauren Boebert in Colorado, in a race still too close to call. And in California’s 41st District, neither national party invested in any serious way, with the race neck and neck as mail ballots are counted.