New York Democratic Party Chair Takes No Responsibility for Elections. So What Does He Do?

“I know that there are lots of people that think I’m the worst person in the world,” Jay Jacobs said, “but the truth is I’m probably only in third or fourth place.” 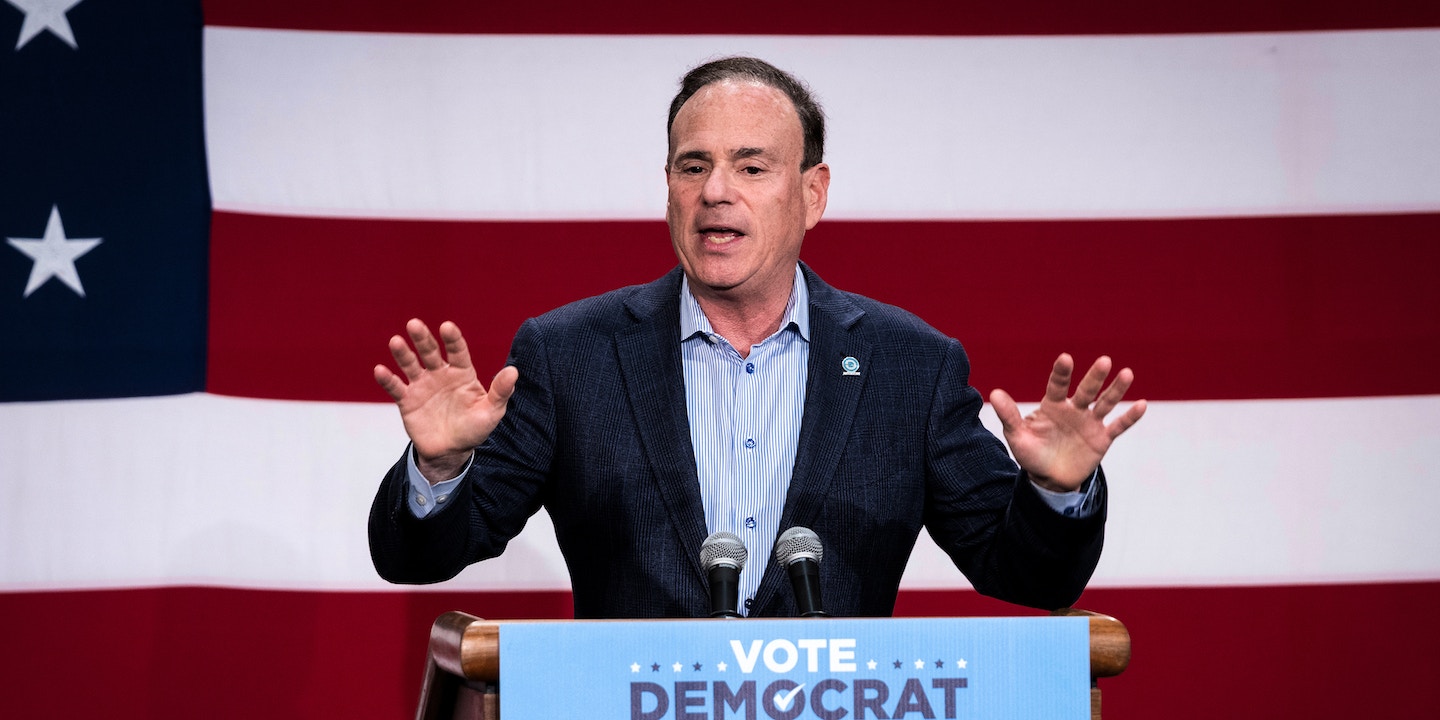 On Wednesday, after it became clear that Democratic losses in New York could help Republicans retake the House, the state’s Democratic Party chair deflected.

“I’m not going to take responsibility for or blame, if you will, for losses that we had here,” New York State Democratic Party Chair Jay Jacobs told City & State. Instead, Jacobs said, the blame lay with progressives.

Republicans need to net five seats to take control of the House and have so far flipped four. They include congressional seats in the backyards of party leaders: two in the Hudson Valley, including House Democrats’ campaign chair Rep. Sean Patrick Maloney; and two in Long Island, where Jacobs also chairs the Nassau County Democratic Committee.

“I only really see his name come up when he’s yelling at the progressive lane of the Democratic Party, or when he’s trying to avoid blame.”

As the carnage for Democrats in New York crystallized on Wednesday, party leaders across the state swiftly called for Jacobs’s resignation. Asked about those calls, incumbent Democratic Gov. Kathy Hochul, who won reelection on Tuesday even as the party suffered down the ballot, told reporters she had no plans to replace him.

After Tuesday, though, many New York Democrats wonder if the party’s blind spots could weaken their hold on the solidly blue state. With Jacobs distancing himself from the losses, many are asking the question: What does Jay Jacobs actually do?

“To be honest, I had the same question of what Jay Jacobs does all day,” Brisport told The Intercept. “I only really see his name come up when he’s yelling at the progressive lane of the Democratic Party, or when he’s trying to avoid blame for losses up and down the ballot for Democrats. And it wasn’t just this year, it was last year too.”

In lengthy comments to The Intercept, Jacobs explained that most of his critics are misunderstanding his role as state party chair. “First everyone needs to understand what the State Party is and is not. The State Party is a coordinating and infrastructure building organization,” he said, by way of introduction. “As Chair, I oversee that effort and raise a lot of money to fuel those efforts.”

“I know that there are lots of people that think I’m the worst person in the world,” he said, “but the truth is I’m probably only in third or fourth place.”

He said the party apparatus will help fund mailers when campaigns ask, but that it does not drive campaigns, choose candidates, or conduct other activities undertaken by groups like the national Democratic Congressional Campaign Committee or state-level Democratic Assembly Campaign Committee. “Those entities are the lead for candidate selection, campaign strategy, campaign staff & consultant selection, polling and field organizations,” he said.

At least one answer for what Jacobs does for his job is: his day job. In addition to his role as state Democratic Party chair, Jacobs is the chief executive officer of TLC Kids Group, an organization that runs children’s summer camps in the Northeast.

In his capacity with TLC Kids, Jacobs also pursues centrist Democratic electoral politics — also with notable flops. Jacobs and the company gave $100,000 to the Democratic National Committee this cycle and backed centrist Democrats, including Maloney, who lost his race to a Republican, and Vedat Gashi, who was beaten in the primary. Jacobs said, “Not only did my company contribute (at the legal limits) but I contributed personally and am proud of it.”

Jacobs has long shown disdain for the party’s progressive wing. In 2019, shortly after Gov. Andrew Cuomo appointed him to chair the state party, Jacobs launched efforts to sideline progressives. First, he pushed a ban on fusion voting, which allows different parties to nominate the same candidate. Then later, Jacobs worked to raise the threshold for parties to appear on the ballot — an apparent effort to keep the Working Families Party off of it.

Asked about his reported remarks in City & State blaming progressives for 2022, Jacobs said, “I don’t believe that I said that in the manner you articulated. If I did, I should not have said it that way.” He added, “New York State is much larger and its constituency much more ideologically diverse than Astoria, Queens — and everyone needs to remember that.”

Some progressives remained unconvinced that a party honcho bears no responsibility for electoral losses.

“Jacobs says he isn’t responsible for the New York Democratic Party,” said progressive strategist Gabe Tobias. “Good. So quit — and let someone run the party who actually cares about our issues and our voters.”

Jacobs said calls for his resignation were misguided. “A lot of the finger pointing is coming from those who did little to nothing or ran in districts that they couldn’t lose if they campaigned against themselves!” Jacobs said. “I got no credit for any of our 2020 wins. I only hear from them when we lose. This is not personal. It’s simply because I remain an outspoken voice of the moderate wing of our Party.”

Figures in the Democratic Party have consistently criticized the electoral strategy Jacobs pursued as party chair. Last year, they complained when Democrats saw setbacks in Jacobs’s own Nassau County, when Republicans won seats from their party across the board. Earlier this year, Jacobs was criticized for using his position atop the New York State Democratic Party to interfere in Democratic primaries against progressive candidates.

“You have these candidates out in Long Island, in South Brooklyn, and in Eastern Queens that really could have used that help,” Brisport said, of Jacobs using the limited resources to attack fellow party members. In the onetime party stronghold of South Brooklyn, for instance, Democrats in the state Assembly suffered significant losses this year.

Sometimes, Jacobs’s heated rhetoric about progressives drew fire. In last year’s race for mayor of Buffalo, Jacobs, in his refusal to endorse her, compared progressive Democratic nominee India Walton to Ku Klux Klan leader David Duke. Walton went on to win the Democratic primary against incumbent Mayor Byron Brown, but lost the general election campaign after Brown banded with Republicans to run a write-in campaign. Jacobs, who was forced to apologize for the Duke remark, marshaled no state party support for Walton.

In other instances, Jacobs’s tactics have come under scrutiny, even from national Democratic figures. In 2020, Jacobs came under fire from the offices of Sens. Bernie Sanders, I-Vt., and Elizabeth Warren, D-Mass., for using their images on ads against the Working Families Party.

Jacobs’s fixation on attacking progressives, his critics say, has caused him to drop the ball on consequential issues for the party. Last year, Democrats in New York failed to approve several ballot measures, including one that would have improved the independence of the state’s redistricting process. Conservatives ran ads against the measures, and Democrats spent nothing to counteract that messaging; Jacobs has said he hadn’t been asked to help. Three of the five proposals which Democrats had expected to pass failed by wide margins.

“He was so busy last fall yelling at India Walton, the Democratic nominee in Buffalo, that he did not support those candidates out in Long Island and also failed to spend any money on Prop 1, which would have stopped Republican judges from gerrymandering the lines this year,” Brisport said. “That’s just last year.”

While Democrats like Jacobs and Hochul struggled to answer for the party’s losses on Tuesday, other officials and strategists were more clear-eyed in spelling out the failures.

“There’s a reason the state party failed to protect House seats across New York: Rather than focus on fighting Republicans, Jacobs has spent years using the party’s resources and money to attack anti-corporate Democrats like the Working Families Party,” Democratic strategist Monica Klein told The Intercept. “Jacobs spent a full year using a state commission to make it harder for the WFP to keep its ballot line. Under the past Governor, anyone who threatened Andrew Cuomo’s agenda of corporate-friendly politics and governance was attacked by Jacobs’ Democratic Party. And the party hasn’t changed course under a new administration.”

“He really thinks that the fight to save the Democratic Party relies on him ousting the leftists and socialist left from the party.”

It’s not enough to blame Jacobs for Democrats’ losses without charting a clear path forward, Brisport said. He agrees with fellow New York progressive Rep. Alexandria Ocasio-Cortez that Jacobs needs to resign or be fired. Brisport also wants the party as a whole to think more broadly about who will define its future, and how.

“He really thinks that the fight to save the Democratic Party relies on him ousting the leftists and socialist left from the party,” Brisport said, “and has put his time and energy there while Republicans just lap up seats all across the state.”

Shortly before Democrats achieved a supermajority in the state Senate in 2020, Jacobs told reporters that he had a word of “caution” for the party: “Let’s slow it down.” The lesson of this year is just the opposite, Brisport said: Moderation in Albany didn’t translate into wins on Election Day. “My read of this session is that we did things to sort of appease concerns of legislators in the suburbs,” Brisport said. “We didn’t create any new taxes, even though we should have to fund social programs.”

Centrist Democrats have been plodding along with their agenda — the legislature passed tax credits for homeowners, rolled back the state’s bail reform law, and implemented a gas tax holiday — but it hasn’t yielded fruit for the party. “We did all these things, and then Republicans won those races anyway,” Brisport said. “So if anything, we should just be doing the opposite, in my opinion. I hope we learned our lesson.”

Correction: November 14, 2022
Due to an editing error, this story contained an incorrect reference to Jacobs’s employment at TLC Kids that has been removed.